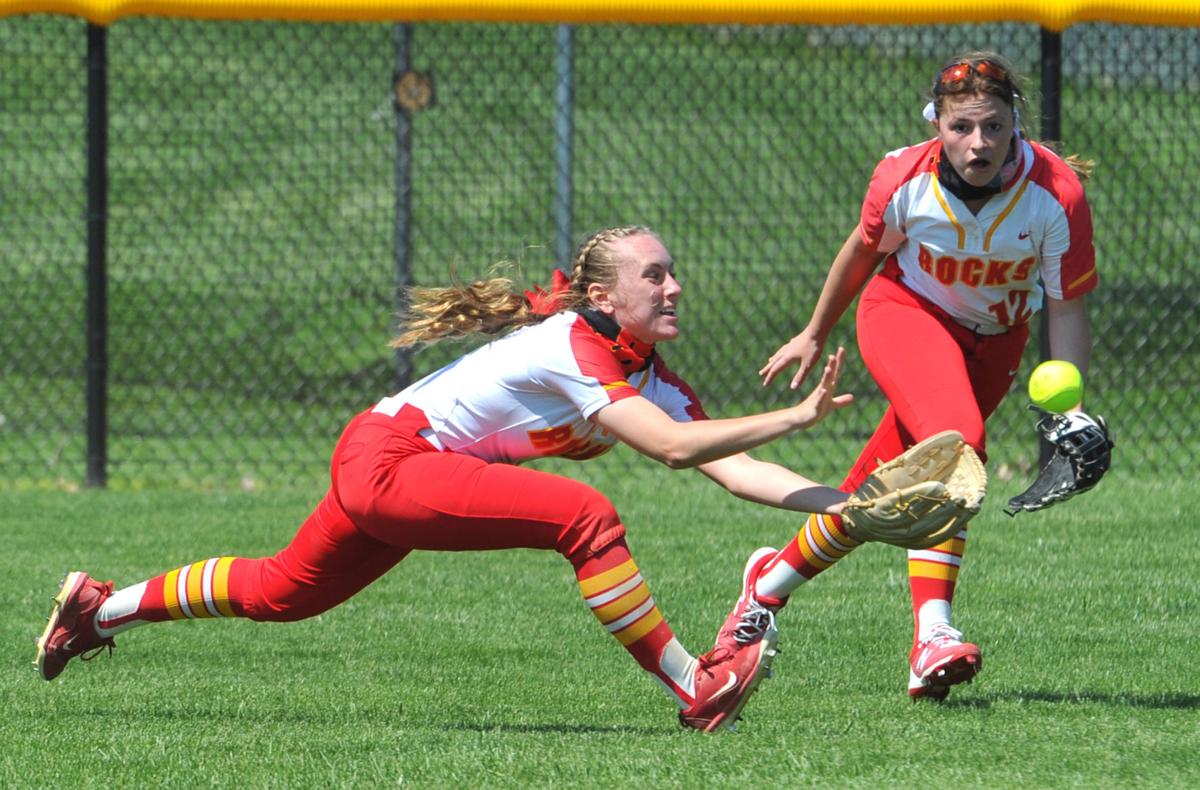 Rock Island's Bella Allison and Lexi Carroll go after a United Township fly ball in the third inning of the first game in their Western Big 6 Conference opener at United Township on Saturday. 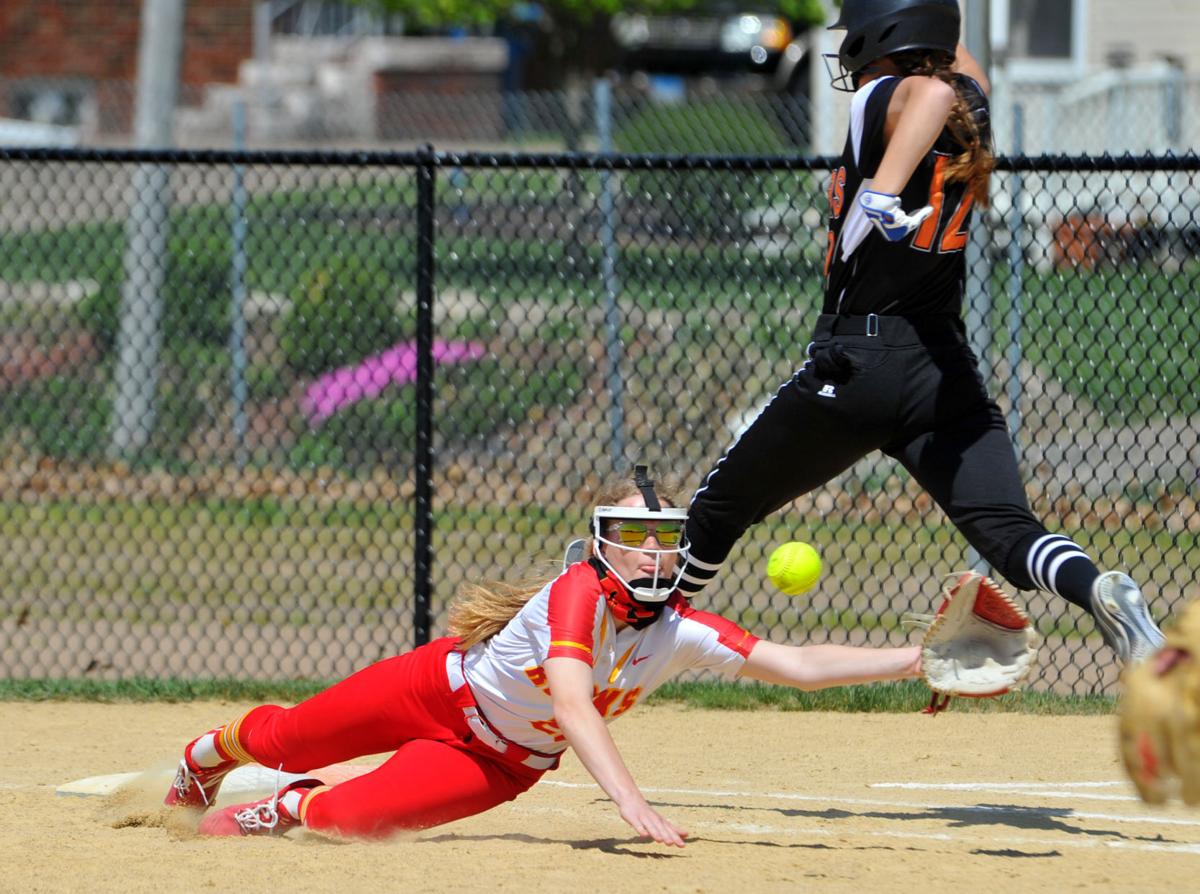 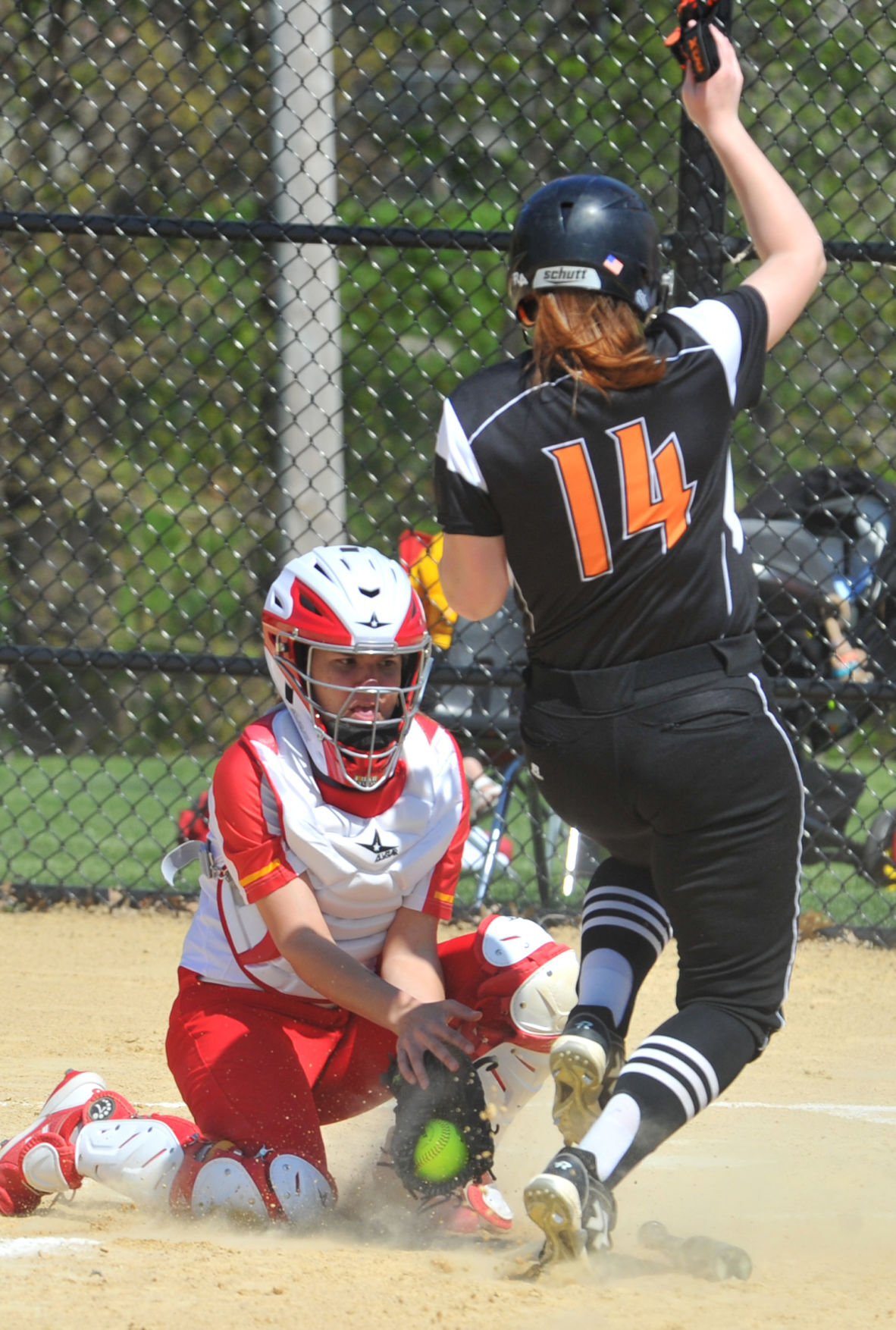 The Rock Island High School softball team’s bats were as vicious as the wind gusts in a doubleheader sweep at United Township to start Western Big 6 Conference play on Saturday afternoon.

The three-time defending conference champions won 8-4 and 8-0 to extend their win streak to 12 straight Big 6 games.

Rock Island coach Chris Allison said Saturday's contests were the windiest he’s been a part of. A wind advisory was issued Saturday afternoon with wind speeds measured at 20 to 30 mph, with gusts up to 50 mph, according to the National Weather Service.

Fly balls found the ground more often and play was frequently paused for gusts of dust to settle down.

University of Tennessee softball commit and Rock Island junior Taylor Pannell cranked a home run in each game, including a Game 1 grand slam that was ruled fair with the wind pushing it high toward the foul pole.

On a team that started nine juniors and a sophomore, Pannell finds herself as one of its only players with returning varsity experience after last season was canceled because of the COVID-19 pandemic. Rocky has only two seniors on the roster. With volleyball season wrapping up just over a week ago, a junior-dominated Rocky squad is just beginning to find its footing.

“Not playing last year was really hard,” Pannell said. “(I am) coming in and stepping up and being a leader with only playing my freshman year with Coach Allison. But we’re all fine, we all know what we should do.”

All things considered, Pannell said the team has performed well. Pannell’s grand slam came in a six-run second inning in the opener. She hit a two-run bomb in a five-run seventh in Game 2.

“With having the big innings, everyone played a part,” she said. “It wasn’t just one person. Everyone had a hit here and there.”

Rocky was actually out-hit 14-9 in the opener, with RI starting pitcher Delia Schwartz getting out of a couple bases-loaded jams en route to getting the win to even her record at 2-2. Rachael Winkel (0-4) took the loss for UT, but settled down to retire the last eight Rocks and not allow a hit the last three innings.

Junior pitcher Campbell Kelley tossed a two-hitter for Rocky in Game 2, relying on her defense to make outs on a windy day. Kelley (3-0) did not allow a hit until the fifth inning after walking her first batter. She struck out four in the win. Campbell is the younger sister of former Rocky softball players Lindsey and Delaney Kelley.

“It was hard to work with the wind, but the defense played really well behind me, so it was fine,” said Kelley, noting the defense settled into the dusty and windy conditions after the opener. “When I was pitching, they got the hang of it and had some amazing plays out there that definitely changed the game.”

Rocky junior Mackenzie Brokaw made one of those plays, a nice diving catch in left field. Gabby Taber also hit a solo home run for Rocky in Game 2.

Schwartz had two RBIs in each game. Pannell and Bailey Proffitt also knocked in two runs in the later contest.

Coach Allison said the team is still working on its approach at the plate, but the big innings were nice to see, along with a strong outing from Kelley.

“She did a great job to keep us in there and kept pumping strikes and throwing up zeroes,” Allison said.

Kirsten Webber (2-3) took the loss in Game 2, keeping the deficit 3-0 until things got away from the Panthers in the seventh inning.

A moment of prayer for UT senior MaKaila Hernandez was held before the game. Hernandez was transferred to the hospital in Peoria after a collision during Friday’s game at Peoria Notre Dame.

UT coach John Alonzo was still waiting to hear an update on her condition after the game.

The Panthers already have a number of players sitting out with injury, but the Panthers competed outside the two big Rocky innings. Alonzo hopes to get healthy very soon.

UT senior catcher Autumn Lage was 4-for-4 with two doubles and an RBI in the opener.

Alonzo said another play here or there could have made a big difference in limiting the damage against the Rocks.

“On the offensive side of it, we had chances to score runs and didn’t come through with hits when we needed to,” said UT’s 24th-year head coach. “We’ve got to understand it’s not about getting hits, it’s about when you get those hits.”

Erie-Prophetstown off to blistering start

The Erie-Prophetstown softball team is off to a 5-0 start. It has outscored its last four opponents by a 45-1 margin.

Celebrating its senior day Saturday, the Riverdale softball squad wanted both to mark the occasion and shake off the residue of two tough losses to Three Rivers West Division rival Rockridge this past week. After some early struggles, the Rams did just that.

Geneseo softball gives up four runs in sixth inning to lose to Sterling.

GENESEO — Making its long-awaited debut as members of the Western Big 6 Conference, the Geneseo softball squad hit the ground running Friday a…

Rockridge edged Riverdale for the second straight game between the conference foes, winning 4-1.

GENESEO — Throughout the years, Western Big 6 competition has been a regular part of the Geneseo softball team's regular season.

Rock Island's Bella Allison and Lexi Carroll go after a United Township fly ball in the third inning of the first game in their Western Big 6 Conference opener at United Township on Saturday.