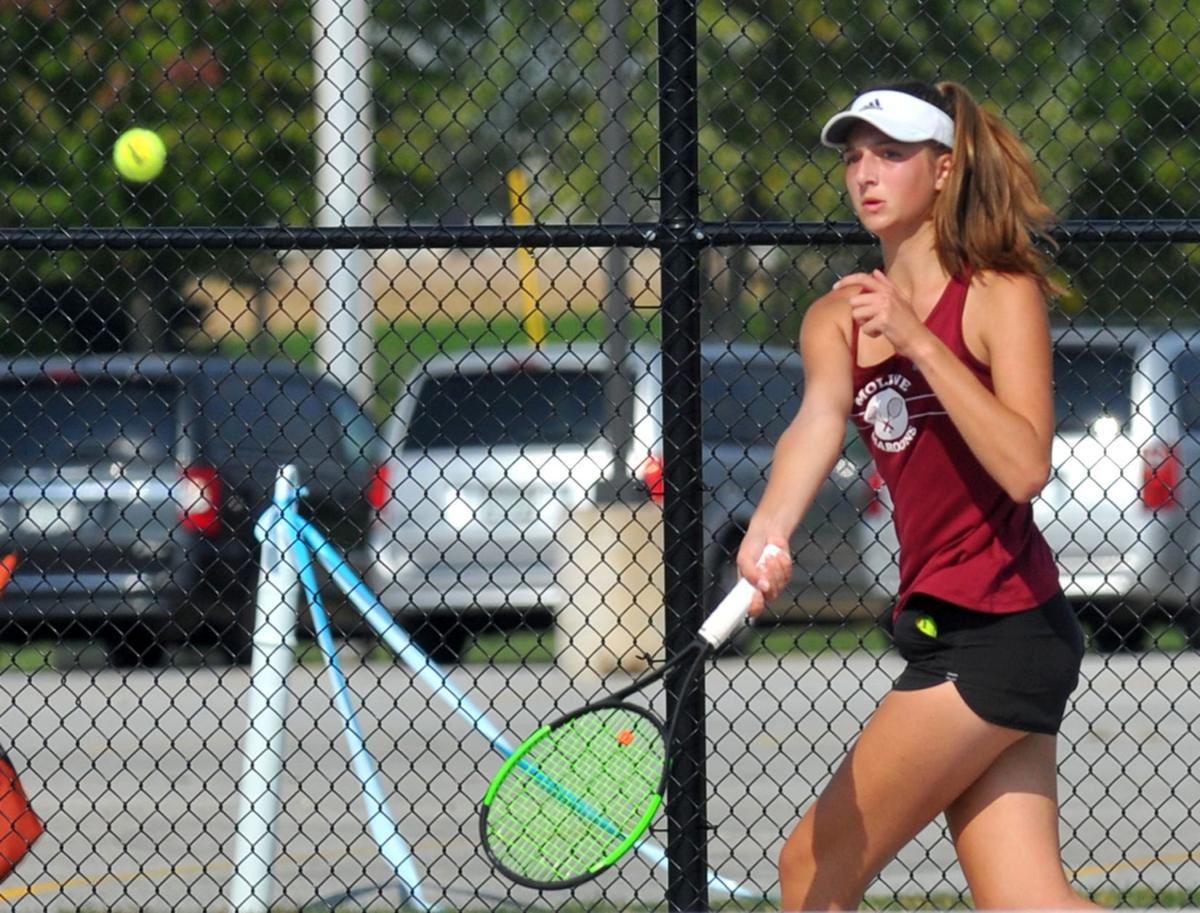 Moline singles player Monika Birski returns a volley back to United Township's Reese Williams in the championship match at the Western Big 6 tournament Saturday at Geneseo. 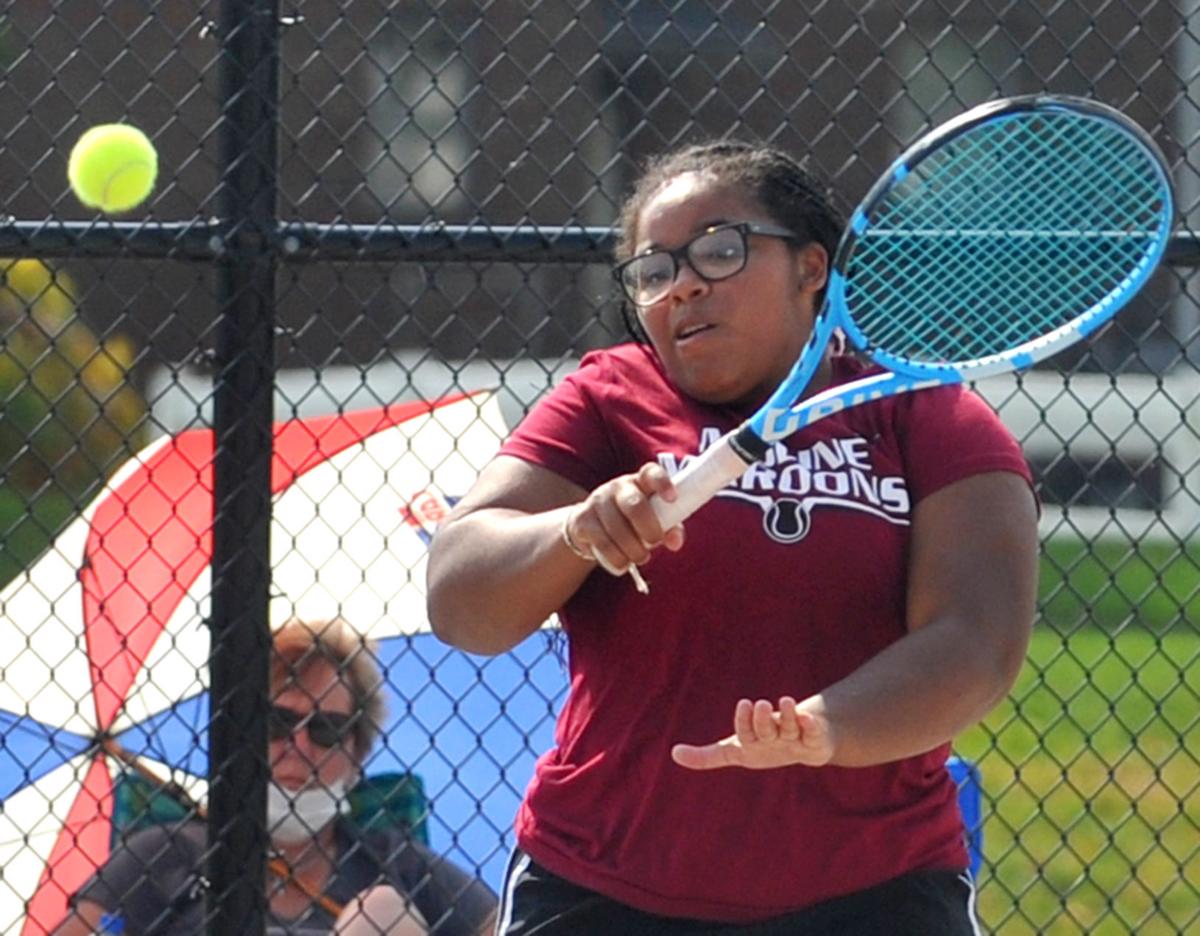 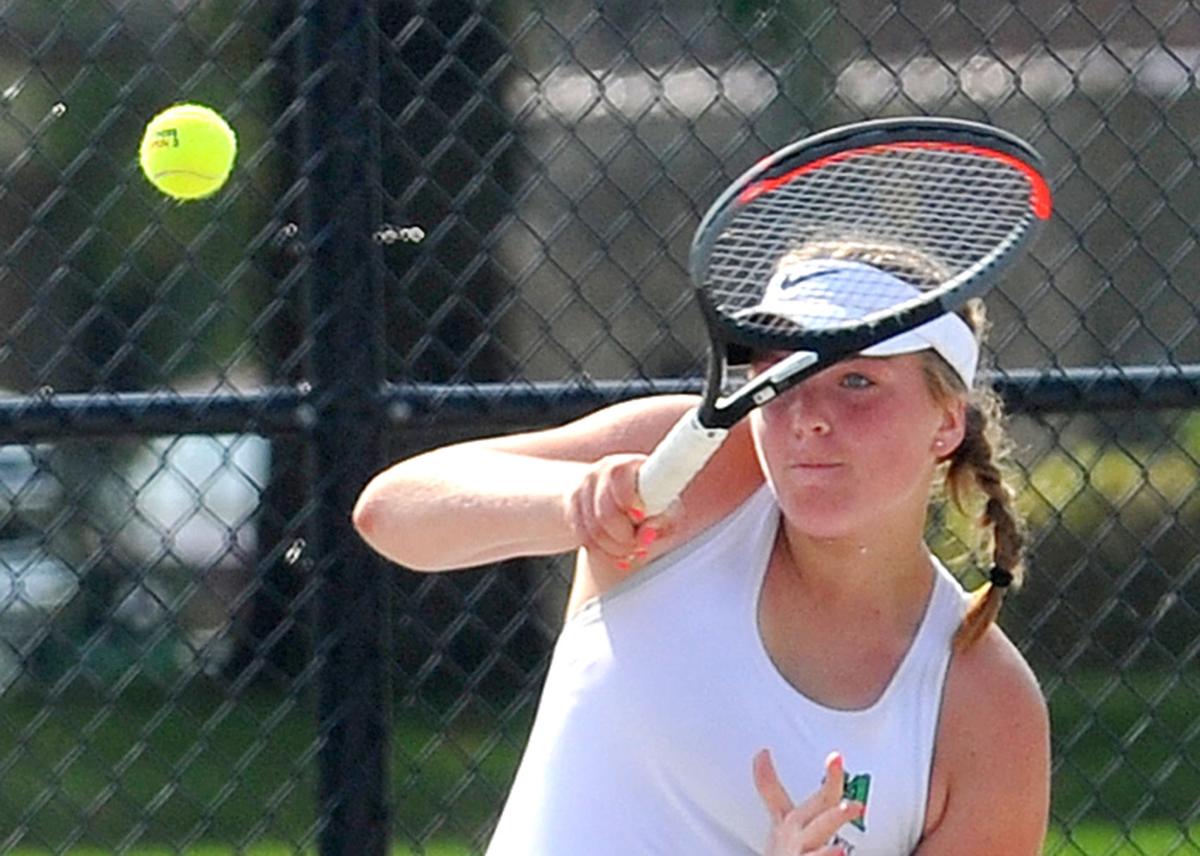 The Maroons, who had all four entries in the semifinals, tallied 25 points as a team to run away from Geneseo and United Township, which tied for second with eight points. Alleman had six points, followed by Quincy (five), Sterling and Rock Island (four each) and Galesburg (two).

In doubles, Moline senior Lauren Myers paired with junior Sarah Gustafson to win the title for the second year in a row. The top-seeded Maroon duo beat second-seeded Alleman sisters Kate and Lucy Rector 6-2, 7-6 (3) in the final.

Birski’s dominant performance in singles avenged her loss to Williams earlier this season as she earned her first Big 6 singles title after placing second a year ago.

Birski, seeded second at conference, said a potential rematch was on her mind ever since.

“It’s been on my mind to come back and get some redemption for myself,” said Birski, “but really, the biggest difference between my game then and my game now was just my mentality.”

After having what she described as a down day in their previous matchup, Birski was sharp against Williams, who lost for just the second time this season. Birski made sure she came back stronger this time around.

“Ever since the match with her (Williams), all I’ve been thinking about is, ‘I want to win conference this year,’” Birski said. “That was my mindset coming into conference yesterday, and I was able to fulfill that.”

Williams said it was the best tennis she’s seen Birski.

“She definitely showed that she wanted it really bad,” Williams said, “and she played her best, for sure.”

Despite the emotions of losing in the finals, Williams got a ton of satisfaction from finishing as conference runner-up.

“This means so much to me right now,” she said. “I would have liked to get first, but I’ll take second any day of the week. This is the best I’ve ever done at conference.”

With the Maroons and Panthers both wrapping the season at the Class 2A Pekin Sectional next weekend, there could yet be a rubber-match between the two players.

“The next week at practice, that’s all I’ll be focusing on, is me playing her again,” Williams said. “That’s my main goal, to win again.”

Alleman’s Rector sisters have lost just twice this season, both times to Moline’s Myers and Gustafson.

The Moline duo knew it had to step its game up against a pair of Pioneers it handled more comfortably earlier this season, 6-2, 6-2. Alleman held a brief lead in the second set Saturday before Moline closed things out in the tiebreaker.

“Once we won the last point, all the weight was off my shoulders,” Myers said. “I felt sick to my stomach at times because I was so nervous. But it felt great once it was all over.”

Gustafson said the two brought more of their “A-game” compared to Friday. They had to be sharp to avoid a third set against Alleman in the final.

Gustafson said she even collided with the fence at one point during the match, but she soldiered on.

“My arm hurt really bad, but I wanted it really bad,” she said, laughing at the moment. “We did win the point.”

Lucy Rector, a senior, said she and her sophomore sister always enjoy the matchups against the strong Moline duo.

“We both had to fight, so it was a good match,” she said.

The Alleman duo’s two-loss resume this season should serve it well back here at the Class 1A Geneseo Sectional next weekend.

“I think we played really well today,” Kate said. “We really wanted it today, but that’s alright. They played well.”

Moline’s third-seeded junior Camille Keys had to withdraw due to injury in the third-place match against Quincy’s Lily Hayes, who led 5-2.

Moline coach Brooke Forsberg was especially proud all six Maroons could continue playing on the second day of conference.

“That was just a really awesome feeling,” she said. “That’s a huge accomplishment and everyone should be really proud of themselves.”

Forsberg said she and Birski had many conversations after the earlier loss to Williams to get her prepared for this time of the year.

Birski was elated to see her teammates perform as well to earn the Big 6 three-peat.

“That was huge, it shows how hard our team has worked this year,” Birski said. “It was really incredible to see everyone get so far this year.”

Moline singles player Monika Birski returns a volley back to United Township's Reese Williams in the championship match at the Western Big 6 tournament Saturday at Geneseo.