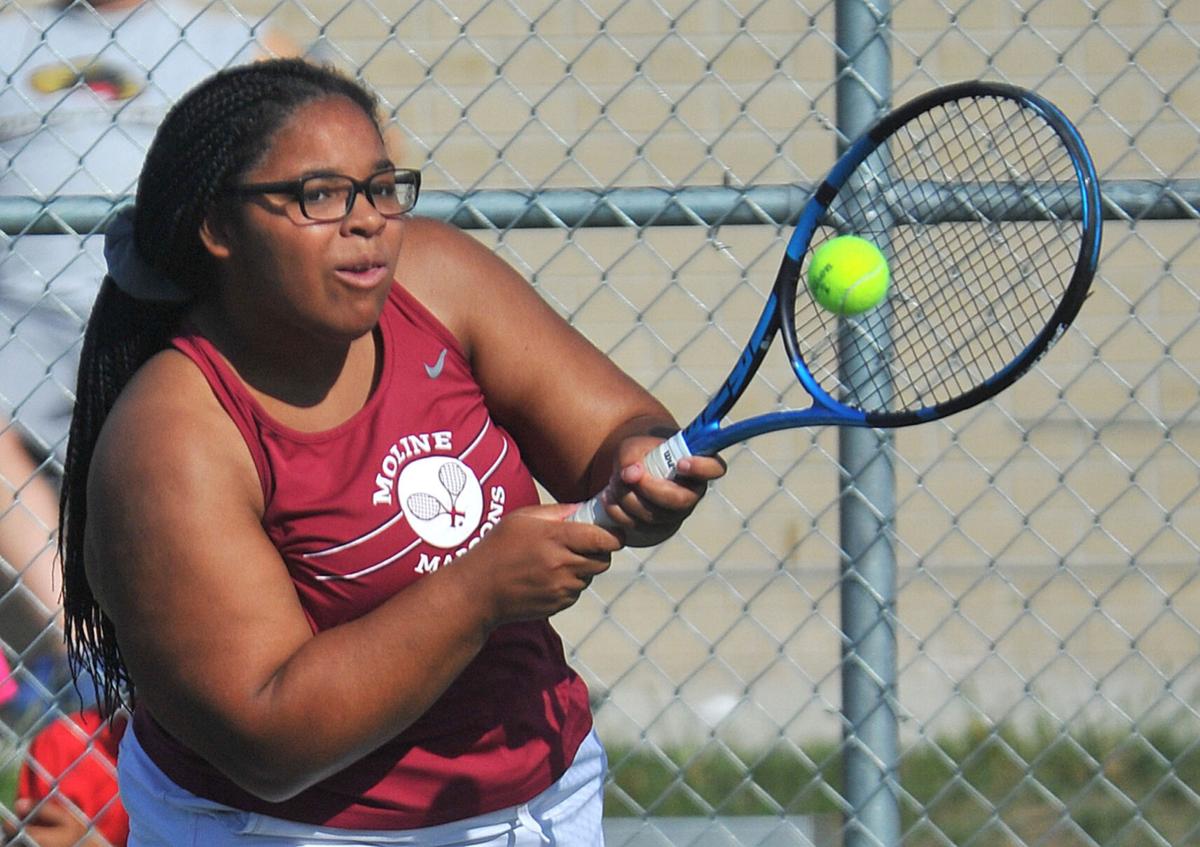 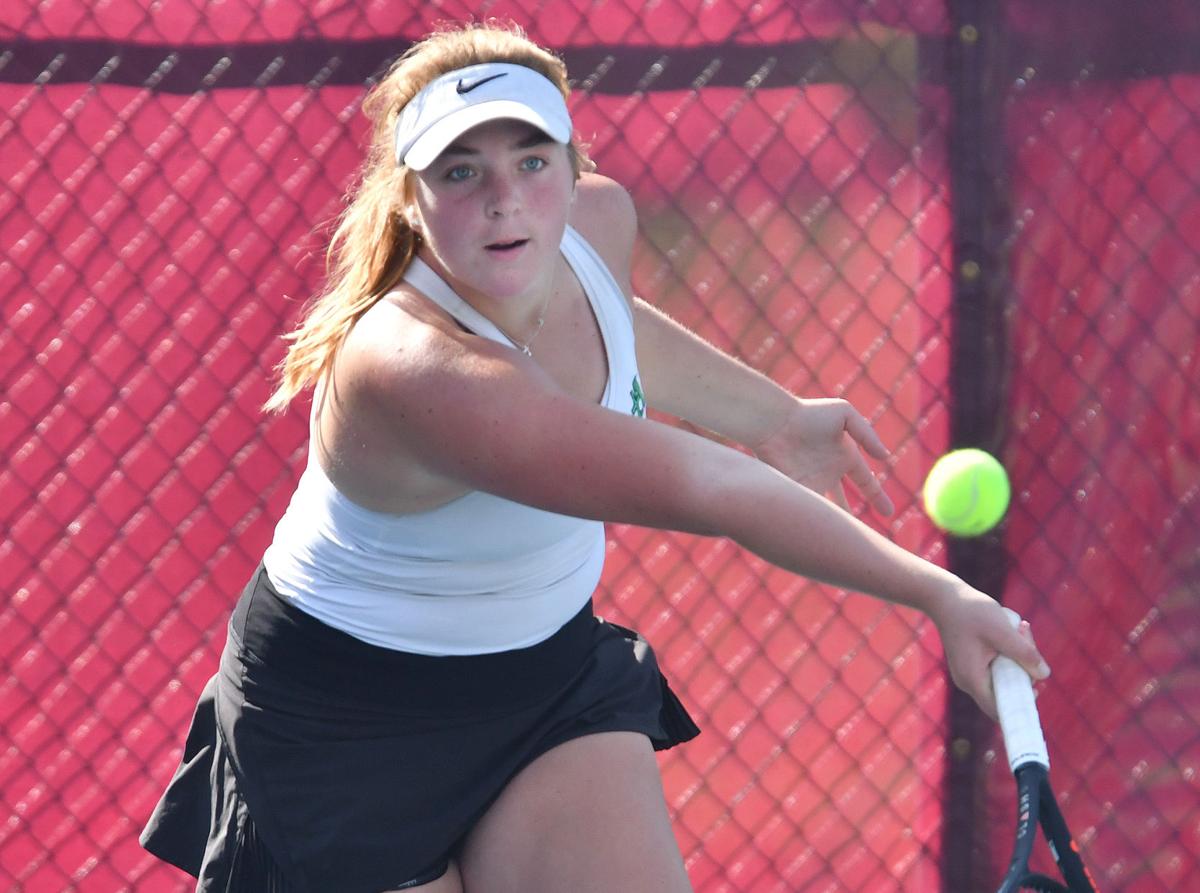 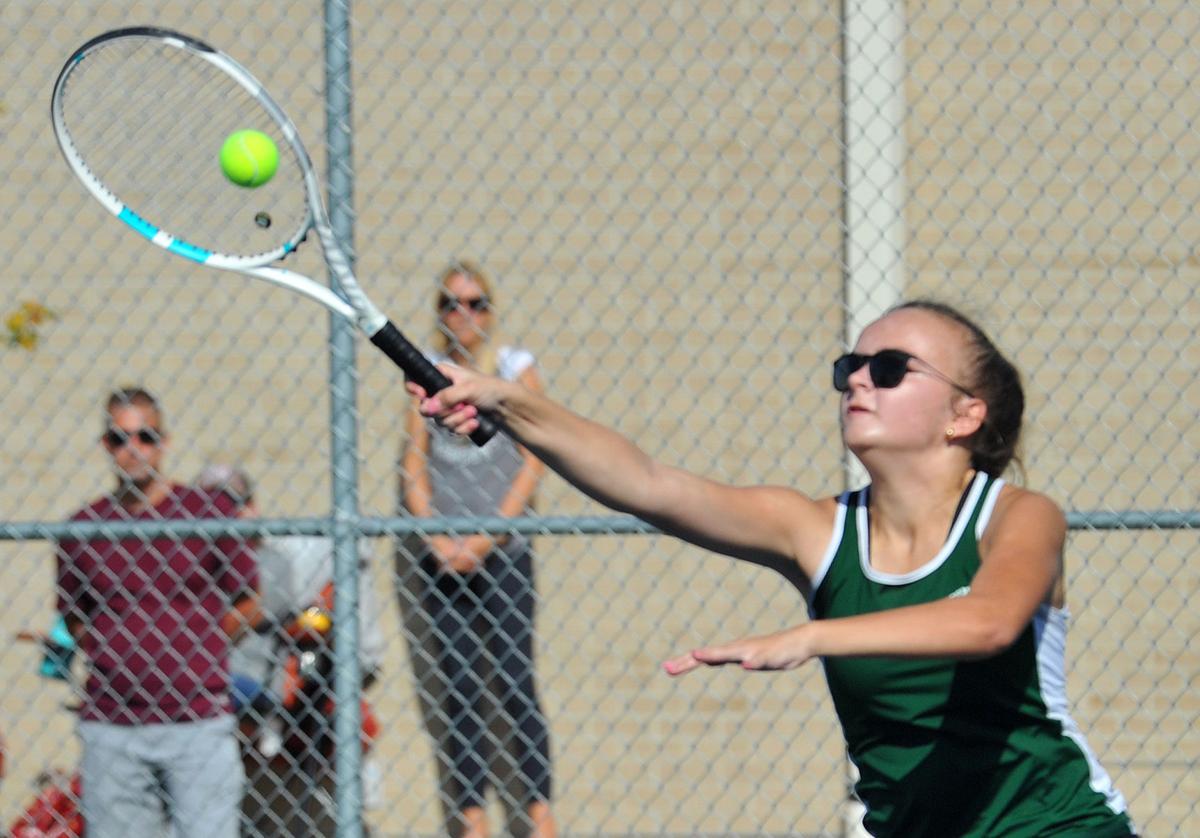 Geneseo's Annie Turpin reaches to return a volley against Moline in the doubles final at the Western Big 6 girls tennis tournament, Saturday at Moline High School.

Alleman's Abby Miller returns a shot back to Moline during their doubles match at the Western Big 6 girls tennis tournament, Saturday at Moline High School.

The Moline girls tennis team ended Friday's first two rounds in the lead in its quest for a fourth straight Western Big 6 title.

Saturday, it made sure it couldn't be caught.

Moline players occupied three of the four courts during the first and third place matches.

“It was exciting,” Moline coach Brooke Devol said. “I talked to the girls a lot about it this week. The second day is more fun if the entire team is there and everyone is getting to play. That didn’t quite get to happen this year, but it was super exciting to have three courts always filled with Moline players. It shows the team’s commitment and love of the game.”

Much of Moline's success came in doubles as Sarah Gustafson and Zayda Graham beat Geneseo’s Ali Rapps and Annie Turpin, 6-2, 6-4, to win the conference crown. The Moline pair's aggressiveness proved key as they sprinted to the net to attack balls to set up point earning shots.

It was Gustafson's third straight year winning the doubles title, the first two coming with since-graduated Lauren Myers. But Graham stepped in this season and the pair was just as dominant.

“They have been really focused this entire season,” Devol said. “I know Sarah, who won conference doubles the past two years with her old partner, was really wanting to keep that going. When she got Zayda as her new partner, she showed great leadership. They work really well as a team. I know Zayda wanted it just as bad as Sarah did. They have great team spirit.”

The second set was close to getting tied at 5-5, forcing extra games, but the Moline pair powered through at the end against a tough Geneseo duo to end it 6-4.

“We had to remind ourselves to calm down,” Gustafson said. “We treated it like it was the first set again. Throughout the season we worked really hard to find out the strengths and weaknesses of each other and that definitely got us prepared for today.”

In singles, Alleman’s Kate Rector continued her magical season by defeating Quincy’s Lily Hayes in the title match 6-2, 6-0 as Rector’s powerful forehand and service game proved too much for Hayes to handle.

"(My forehand) really is a weapon because it’s my favorite shot by far,” Rector said. “If I’m ever not feeling confident I know that I can just hit a forehand. It works for me a lot and I know how to get into a good position to hit it.”

About an hour earlier, Rector had beaten Hayes’ twin sister, Phoebe, in the semifinals.

“They played pretty similarity and they both had really good drop shots that made me run,” Rector said. “They were both good players. But I had a lot more nerves in the semifinal. I got through it on the first set, and then I felt better on the second. By the time the final match came around I was just ready to go.”

Rector’s aggressiveness stood out. She would charge at balls and put them away with a velocity that could not be matched. One serve was so fast and after it was perfectly placed inside the line, it got stuck in the fencing.

“She was playing very offensive in both matches today and she would take those easier shots she got and put them away in the corners,” Alleman coach Ernie Katko said. “She was charging to the net a lot, but that’s her game style. She is aggressive.”

Rector, the top seed coming into the meet, moves to 20-2 on the season.

“I have been chasing this for two years now, and it feels great,” Rector said. “It’s definitely a boost of confidence for next weekend, but it’s back to work Monday to get ready for sectionals.”

Rector's performance, along with the fourth-seeded duo of Abby Miller and Annie Rouse defeating Moline’s Dhruvi Sharma and Charis Wang 6-1, 6-0 to earn third place, pushed the Pioneers into second place in the team race. This is the first year Miller and Rouse have played together.

“We were more consistent in the second match and just played together a lot better,” Miller said. “We had better communication and tried to find the weaker player.

“We kept keeping the mindset that it was 0-0, because even when we are winning, we knew we needed to stay calm,” Rouse said. “It’s great seeing our hard work pay off. It’s super exciting.”

Moline’s Camille Keyes, the second-seeded singles player, lost to Lily Hayes in the semifinals 6-2, 4-6, 6-0, but came out strong in the third-place match to defeat Phoebe Hayes 6-0, 6-3.

“I was really happy for Camille because it’s hard when you lose in the semifinals, especially with it being her senior year,” Devol said. “She had to come into that second match today and clear her mind, but did so while playing the twin of the players she just lost to. She stayed mentally strong and was determined. I was really proud that she bounced back and took third place.”

The Moline team was mentally strong today, a trait that Devol was excited to see before playoffs begin next week.

“I never saw them give up, whether they won or lost,” Devol said. “That’s exactly the type of mental strength we need going into sectionals. If we can keep playing like we did this weekend, I think we should fare really well.”

Moline girls' tennis looks to extend another streak at home

GENESEO — Just over a year ago, Alleman girls' tennis standout Kate Rector was celebrating a sectional doubles title with her older sister Lucy.

After a summer of training in Naples, Fla., nationally-ranked tennis player Nicholas Patrick feels better equipped than ever as he gets into t…

Illinois Pacesetter: Alleman's Rector continues to shine, but now on her own

Alleman's Kate Rector has become one of the best tennis players in the area, compiling a 13-1 record so far this fall with two individual invitational championships. However, her leadership and humbleness are what make her so special.

Geneseo's Annie Turpin reaches to return a volley against Moline in the doubles final at the Western Big 6 girls tennis tournament, Saturday at Moline High School.

Alleman's Abby Miller returns a shot back to Moline during their doubles match at the Western Big 6 girls tennis tournament, Saturday at Moline High School.