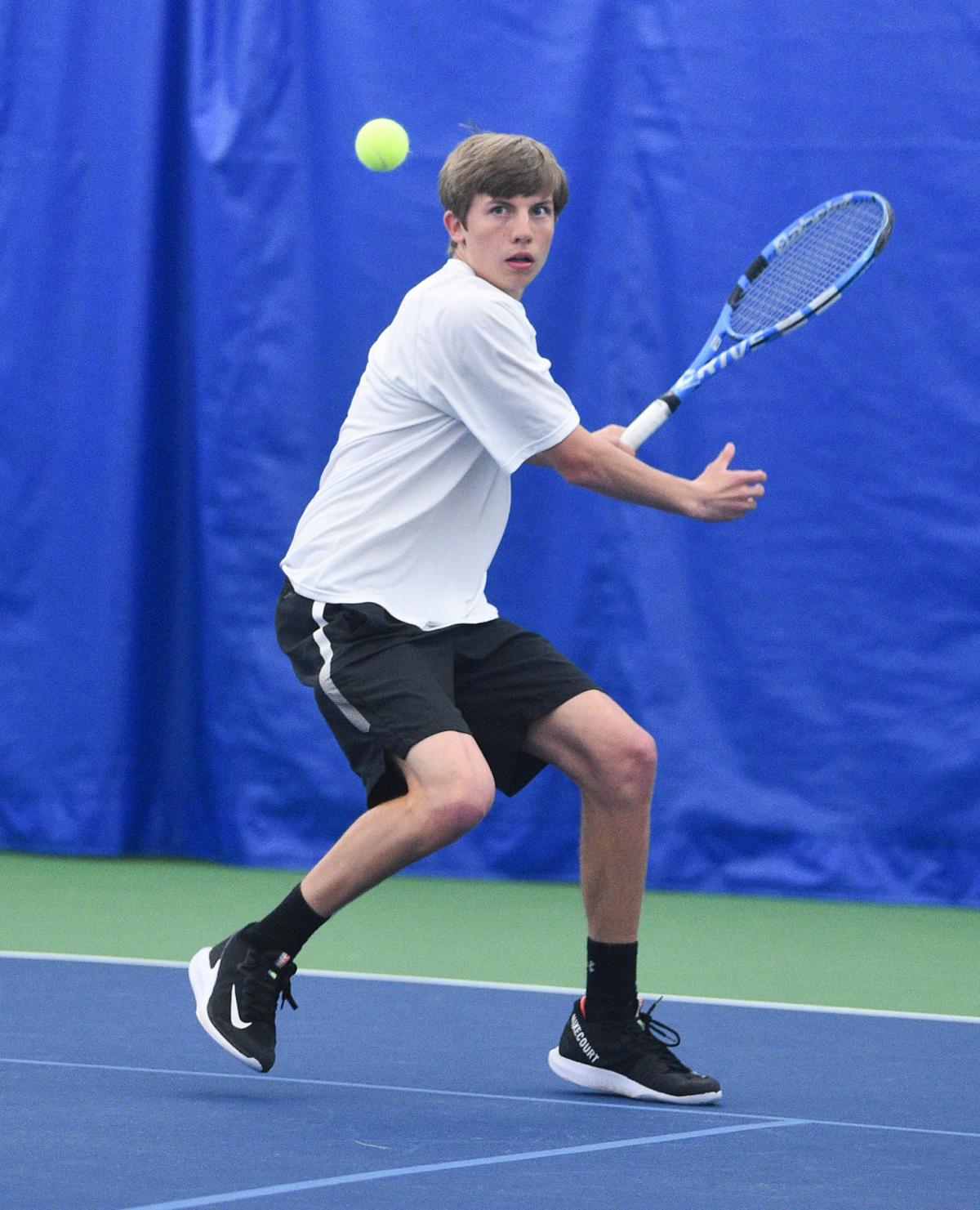 Moline’s Dylan Wiemers returns the ball during the 2019 Western Big 6 Conference Boys Tennis Meet at the Quad City Tennis Club in Moline. Wiemers, a No. 2 seed, won the singles title. 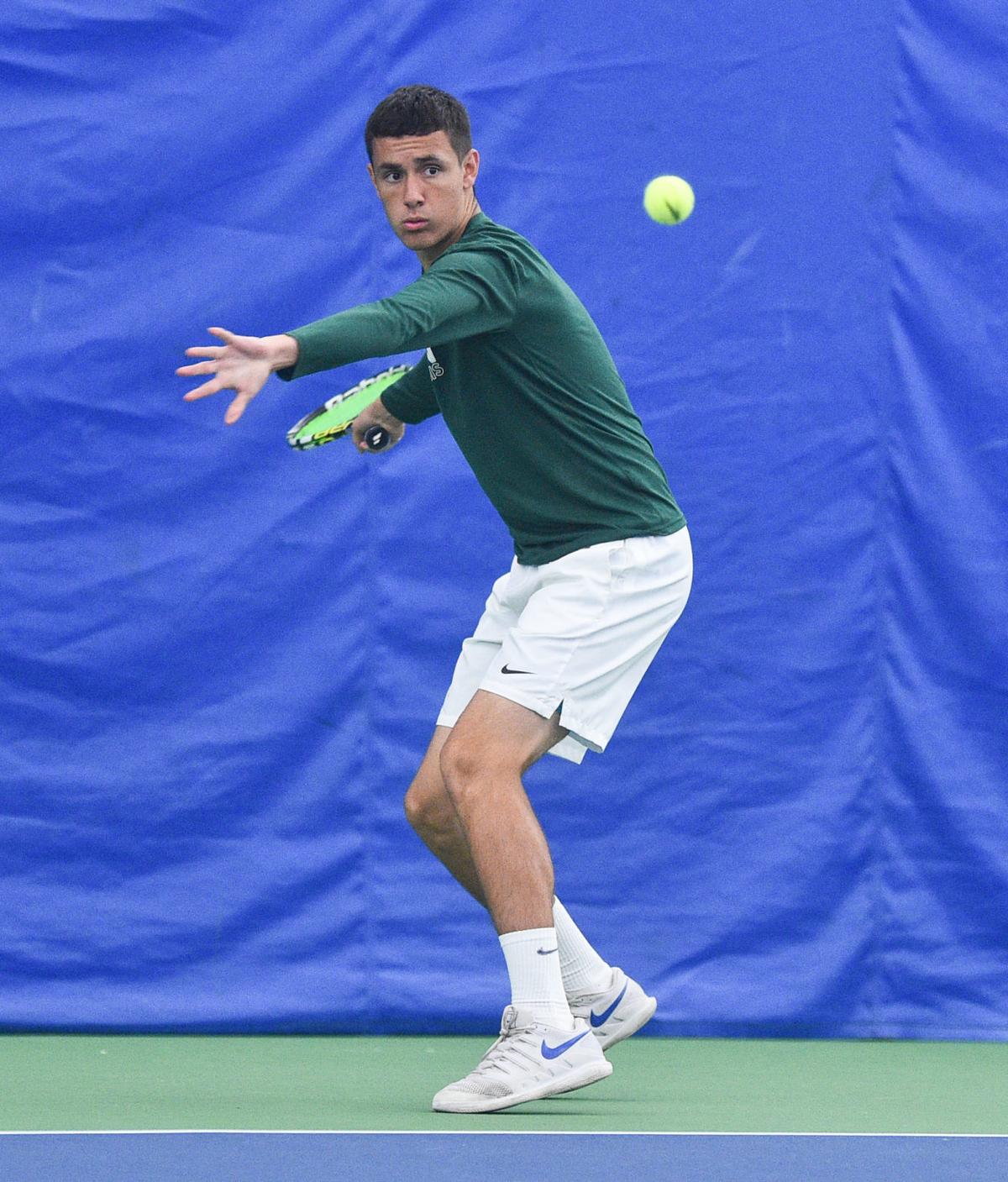 Jesse Dyer returns the ball during the 2019 Western Big 6 Conference Boys Tennis Meet Saturday, May 11, 2019, at the Quad City Tennis Club in Moline. 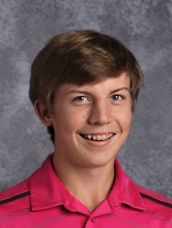 Two of the top boys tennis players in the Western Big 6 Conference the last few years are set to team up at the college level. Moline’s Dylan Wiemers and United Township’s Jesse Dyer both are committed to play tennis at Luther College, a Division III program in Decorah, Iowa.

The two seniors have crossed paths on the tennis court since middle school, and both went on to reach the IHSA state meet in singles and doubles.

Wiemers, the 2019 Dispatch-Argus-QCOnline boys tennis player of the year, made his decision last Thursday to join the Norse and coach Adam Strand. Last year’s Big 6 singles champion plans to room with fellow incoming freshman Nate Withers, a player from Ames whom he connected with during past summer tennis tournaments.

Dyer, who transferred to UT after three years at Alleman, made his college decision a couple weeks ago. Dyer liked the fit and said he’s been familiar with the coaching staff for a couple years.

He and Wiemers will bring a friendly competition to the next level.

“I think it will be great to push each other now that we’re on the same team,” said Dyer, who took fourth in Big 6 singles last year, “and hopefully make Luther one of the best teams.”

The Norse got about halfway through this past season before meets began cancelling in March. Luther lost 5-0 to Augustana College in last year’s opening round of the DIII national tournament. Coach Strand, a 2004 Luther College grad, was the CCIW coach of the year in 2010 with the Vikings. He coached Augie's men's tennis team from 2005-11 and the women's team from 2007-11.

Wiemers, a two-time state qualifier, was a Class 2A sectional and Big 6 doubles champion as a sophomore, along with sectional singles runner-up a year ago.

The two did not face off in the singles bracket at last year’s conference meet.

Wiemers said the familiarity between the two of them will be a plus at the next level.

“(It will) make us better players in the long run,” Wiemers said. “Obviously we’ve been competing against each other for a long time. … It will be fun to compete with him to make ourselves better players.”

Wiemers also had some college golf opportunities as a Class 3A state qualifier a year ago, but decided to go with tennis after his junior season and a productive offseason of hard work, which he called his “best yet”. Wiemers often hits with Pleasant Valley sophomore Jake Dolphin when he can.

Dyer, who transferred to UT in order to jump up to Class 2A tennis competition, hoped to make his biggest mark yet as a senior and show his game to even more colleges. He said not having that opportunity due to the COVID-19 pandemic was unfortunate. He would have been joined by fellow returning state singles qualifier senior Ben Downey in the Panthers' lineup.

“It’s been hard for me recently, but I finally got over it and started thinking about college,” said Dyer, who still meets with his private coach, Donnie Roberts, and gets significant practice time daily at the Deerbrook courts in Bettendorf. “I love playing and this is my favorite time of the year.”

Dyer and UT, which hasn't won a Big 6 boys tennis title since 1979, hoped to shoot for the top spot with Moline at the conference meet, which would have also featured Sterling and Geneseo for the first time.

Despite the disappointment that comes with wondering “what if”, in regards to his senior season, Dyer is confident his hard work will still pay off at the next level.

Wiemers also had goals of winning at conference, sectional and earning all-state honors this season before the pandemic.

He said Moline’s balance of experience and youth would have made for a great team this season. Mason Lapaczonek and Bhanu Pujari were also returning senior state qualifiers for Moline.

The Maroons hoped to avenge runner-up finishes at the sectional and conference meets last season.

“I felt we had a good chance of winning sectionals,” Wiemers said.

Panthers' Williams grows into one of the metro's best talents

Reese Williams wants to be the type of tennis player her opponent is intimidated by.

Maroons shine at own tennis invite

For one season at Moline High School and a subsequent two-year run at Northern Illinois University, Brooke Forsberg and Sara McLaughlin-Cross …

Moline’s Dylan Wiemers returns the ball during the 2019 Western Big 6 Conference Boys Tennis Meet at the Quad City Tennis Club in Moline. Wiemers, a No. 2 seed, won the singles title.

Jesse Dyer returns the ball during the 2019 Western Big 6 Conference Boys Tennis Meet Saturday, May 11, 2019, at the Quad City Tennis Club in Moline. 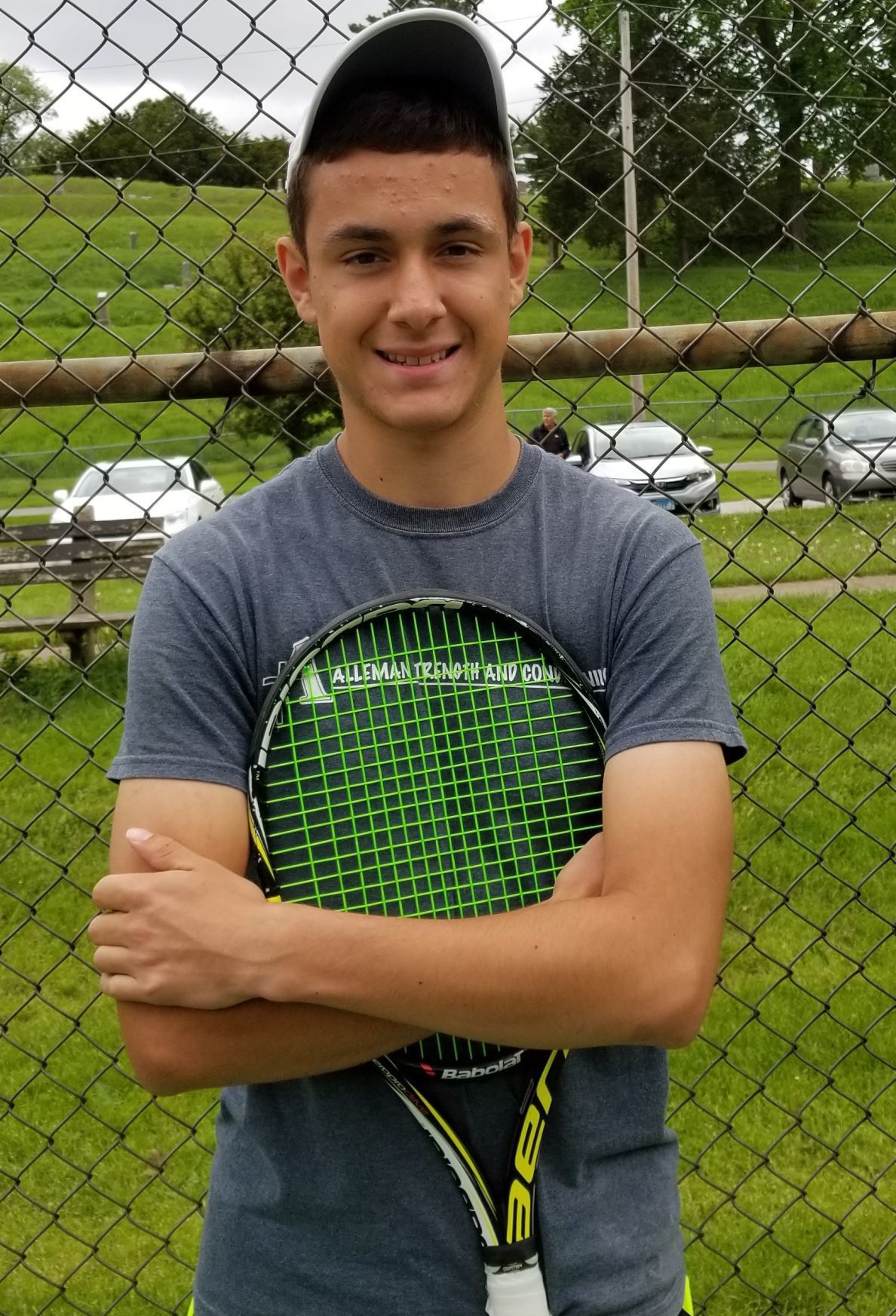