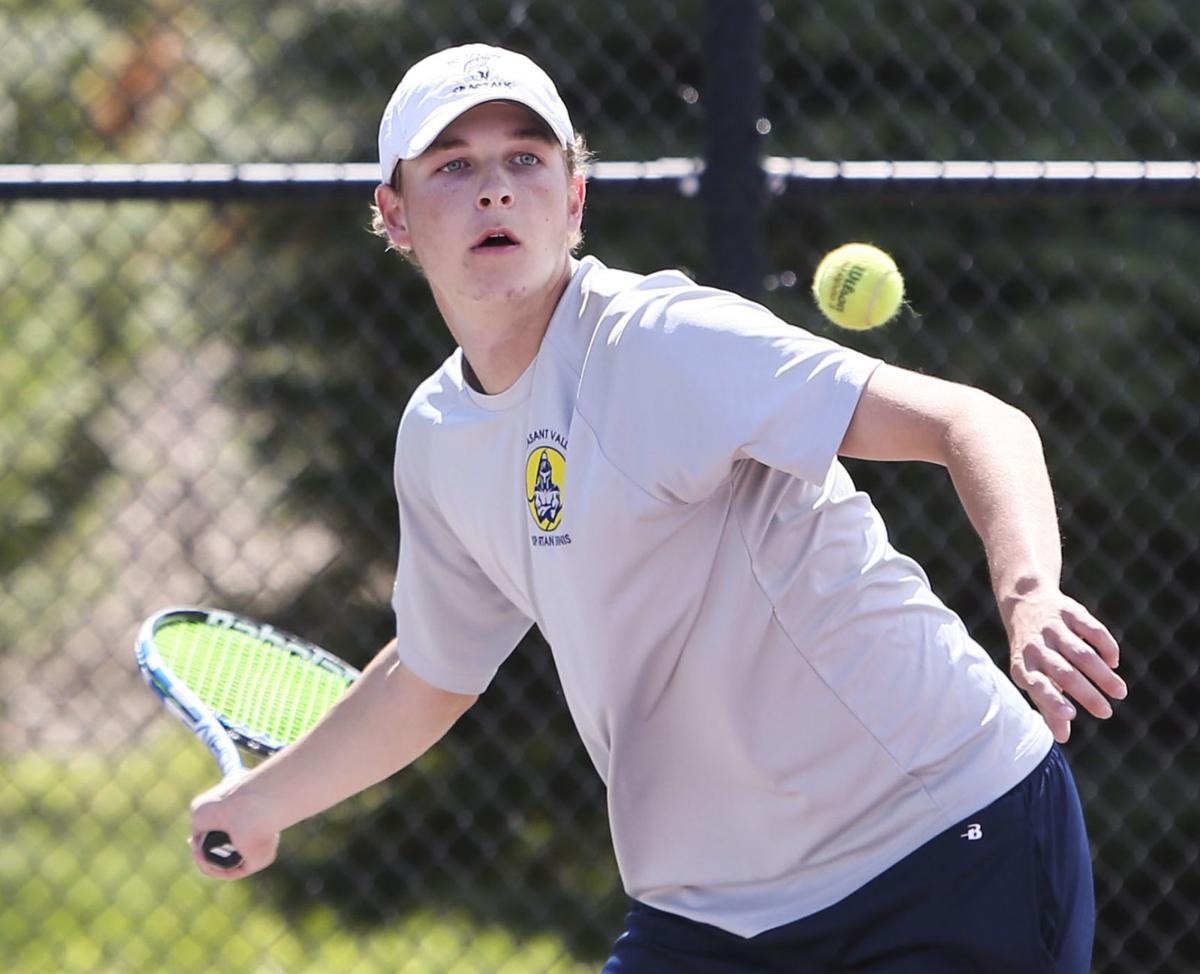 Pleasant Valley's Luke Brunsvold sets up to hit a forehand during his championship match at No. 5 singles on Friday at the Mississippi Athletic Conference tournament in Eldridge. Brunsvold breezed to the title with a 6-0, 6-1 win. 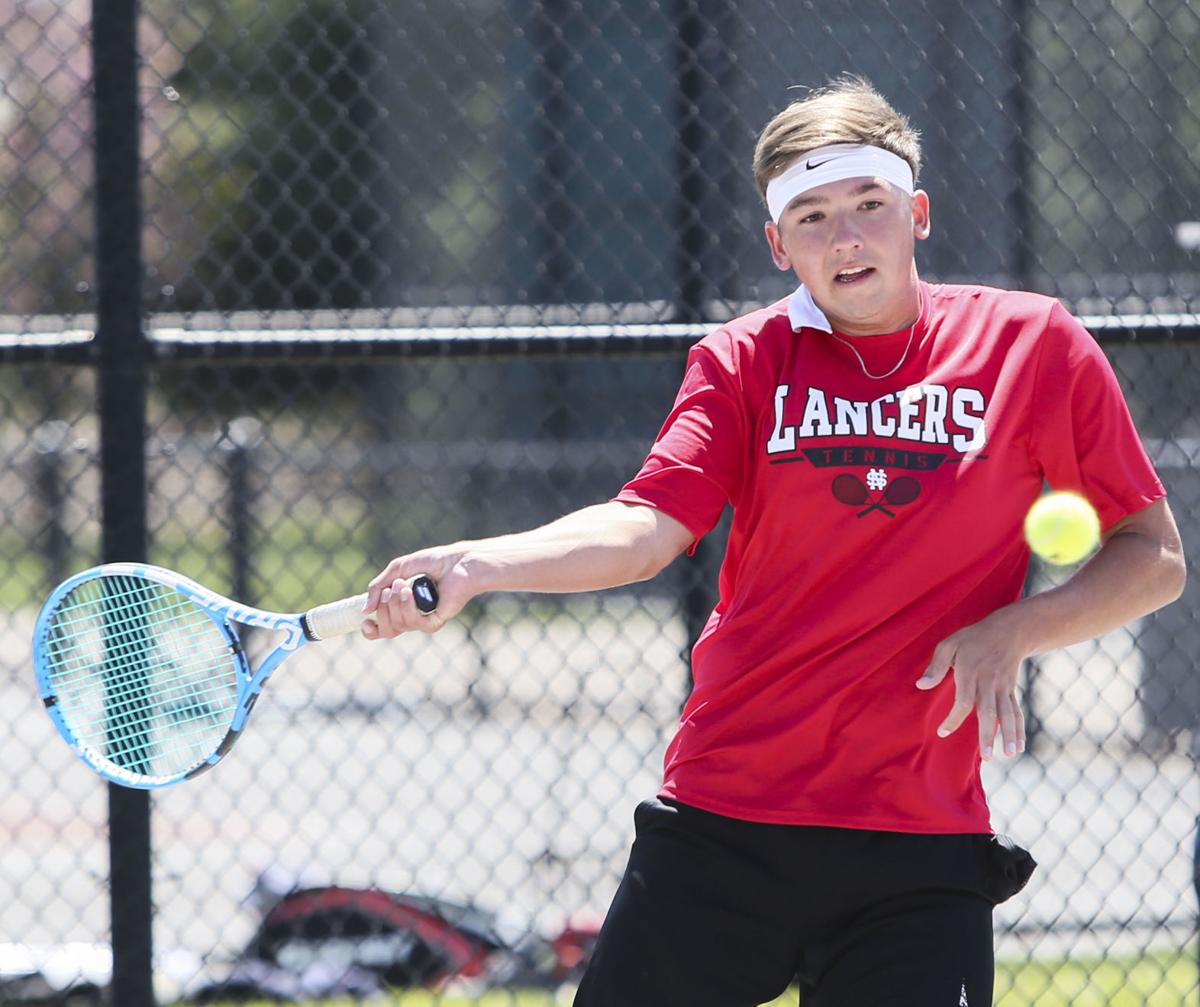 North Scott's Zach Johnson tries to position himself to hit a forehand during Friday's conference tournament in Eldridge. Johnson finished second place at No. 1 singles. 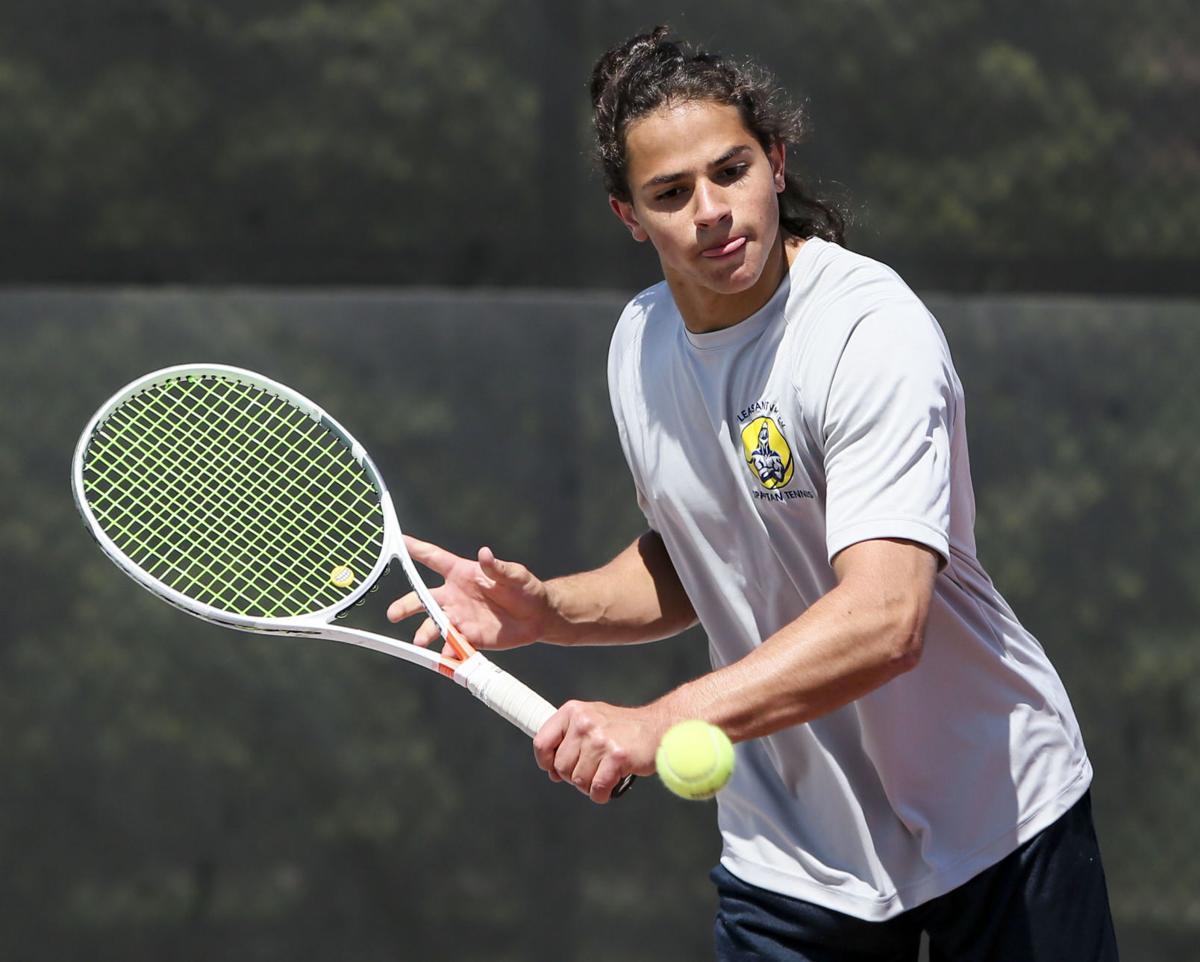 The Pleasant Valley High School senior can solve a Rubik's Cube in less than six seconds. He has gone to competitions and done them one-handed. He has figured them out blindfolded.

"When I was in the third grade, I saw someone solve it really fast on the Internet," Brunsvold said. "I kind of wanted to be able to do that, so I've been doing it little by little every day.

"It has been a fun journey."

He has proven he's pretty good with a tennis racket in his hand this spring.

The lone senior in the team's top six, Brunsvold breezed to a Mississippi Athletic Conference title at No. 5 singles and teamed with Nathan Barlow for a championship at No. 2 doubles Friday at North Scott High School's courts.

Those wins helped lead PV to its seventh MAC championship in the last eight contested.

The only difference between this one and the previous six? The Spartans compiled a perfect score of 27 points, topping the 25 they tallied to win titles in 2018 and 2019.

In all nine flights — six singles and three doubles — they left with gold medals.

"It means a lot because we play year-round and we're always working for this goal, but our goals are a lot higher than this," Barlow said. "Our goal is way beyond MAC. It has been state.

Even with its No. 2 singles player, Brady Adams, sidelined with injury, nobody came close to preventing PV from perfection.

Of the 18 sets the Spartans played on Friday, they never allowed the opponent to win more than two games.

Senior Kyle Sehlin teamed with Dolphin for the crown at No. 1 doubles while Alsheikha and Pangan remained unbeaten on the year with a title at No. 3 doubles.

"It is something to be proud of, something to appreciate, but it also is just one step of a few we still have left as far as our goals," PV coach Randy Brockhage said.

North Scott's Zach Johnson was runner-up at No. 1 singles and Bettendorf's Jack Reilly took second at the No. 2 flight.

Brunsvold was primarily on PV's junior varsity squad as a freshman and sophomore. He was expected to play varsity last year, but the season was wiped out because of COVID-19.

"We have something to make up for this year due to COVID," he said.

The 6-foot-4 Brunsvold hasn't lost a singles match all season, the only player in PV's regular varsity lineup that can make that claim.

In three singles matches at the MAC tournament, he dropped two games in six sets.

Brunsvold is described by his teammates and coaches as goofy and fun-loving.

"He's just always the happiest kid," Barlow said. "He's always someone who has confidence in himself and happy with what he's doing.

"He loves to take over the court in doubles, a very aggressive player. It is fun to have that as a partner."

That aggressive yet light-hearted personality helps with tennis.

"If he feels stress others feel, he doesn't show it," Brockhage said. "It's probably because of his good attitude."

Brunsvold is savoring the final chapter of his high school tennis career. He'll participate in districts next Wednesday, team substate the following week and possibly individual and team state later in the month.

From there, he's off to Iowa State and plans to major in engineering. The Cyclones don't offer tennis as an intercollegiate sport, but he plans to stick with it and play club.

As for his other talent, he has a record to chase. Brunsvold said the world record to solve a Rubik's Cube with two hands is around three seconds.

"When I started out, it took minutes, then a minute, 30 seconds, 20 seconds," he said. "Every time I break my own record, you feel really excited and want to do it again and again."

The same can be said about his tennis.

"The social aspect is really fun with these guys," Brunsvold said. "The practices are more fun than the matches because there is a lot more competitiveness.

Pleasant Valley lost an epic semifinal match to Iowa City West before bouncing back for a third-place win at the Iowa Class 2A state tennis meet.

Pleasant Valley's Luke Brunsvold sets up to hit a forehand during his championship match at No. 5 singles on Friday at the Mississippi Athletic Conference tournament in Eldridge. Brunsvold breezed to the title with a 6-0, 6-1 win.

North Scott's Zach Johnson tries to position himself to hit a forehand during Friday's conference tournament in Eldridge. Johnson finished second place at No. 1 singles.