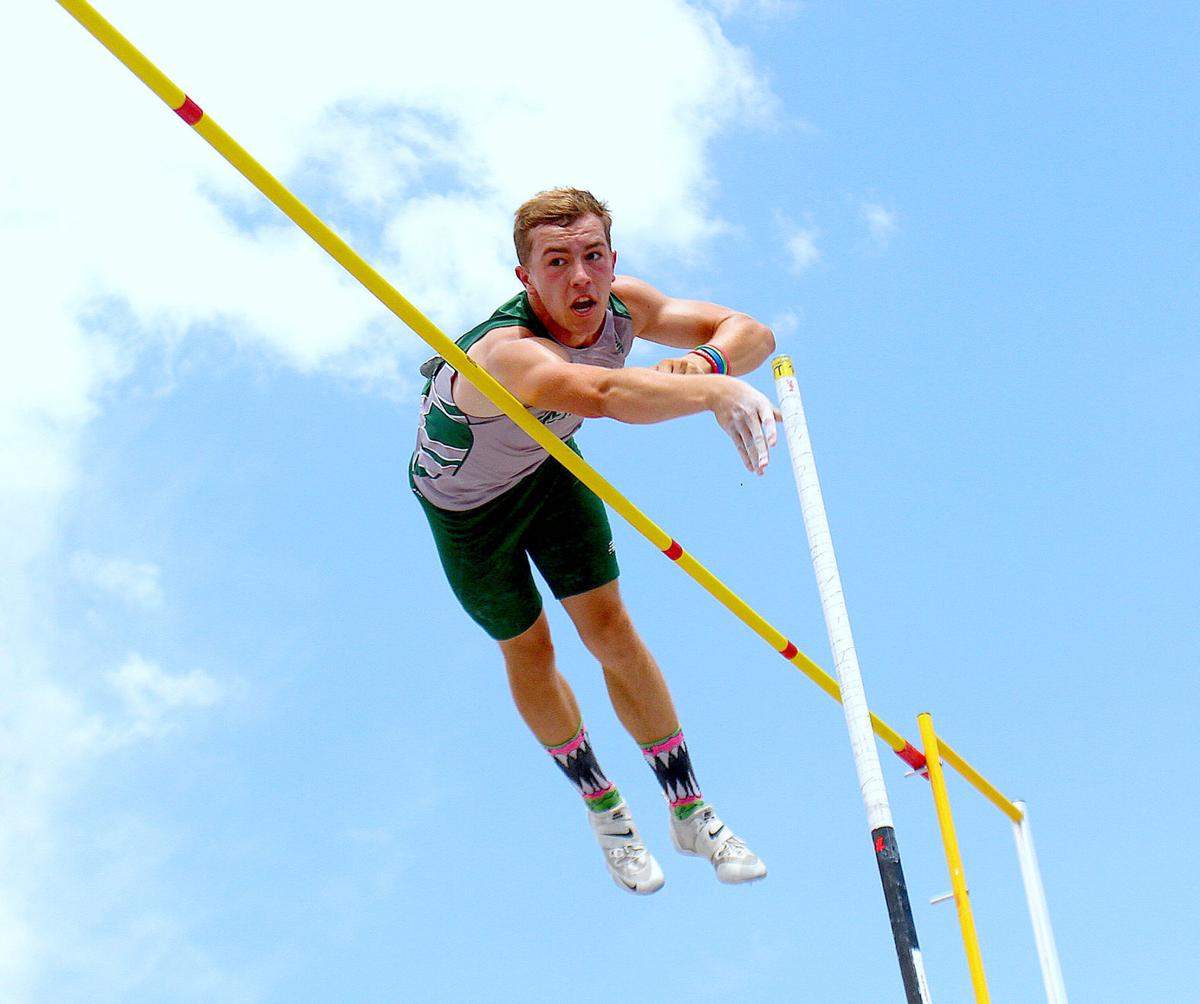 Geneseo's Malakai Schaad clears the bar in the pole vault Friday afternoon at the IHSA Class 2A state meet in Charleston, Ill. Schaad finished second with a clearance of 16 feet. 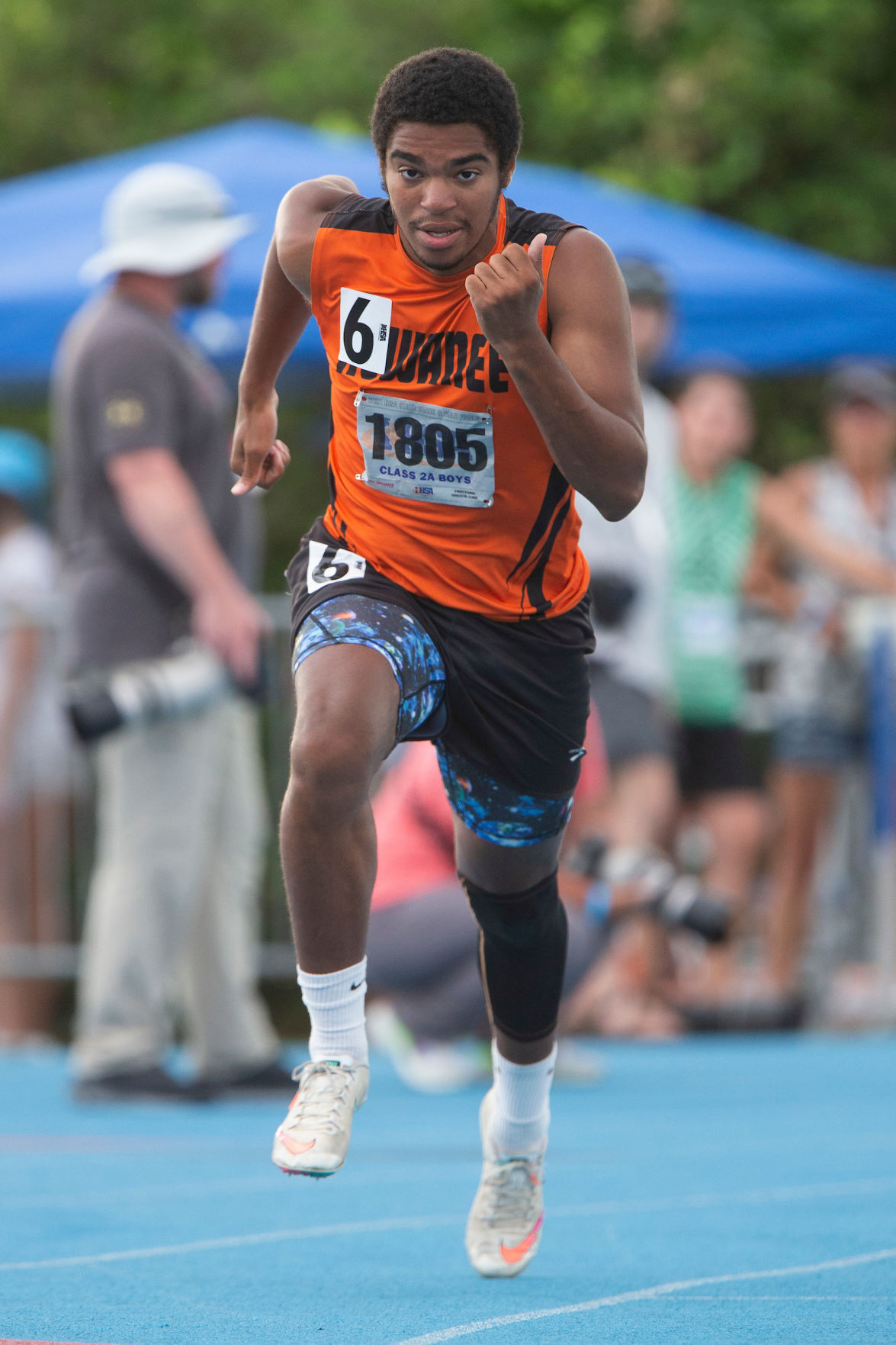 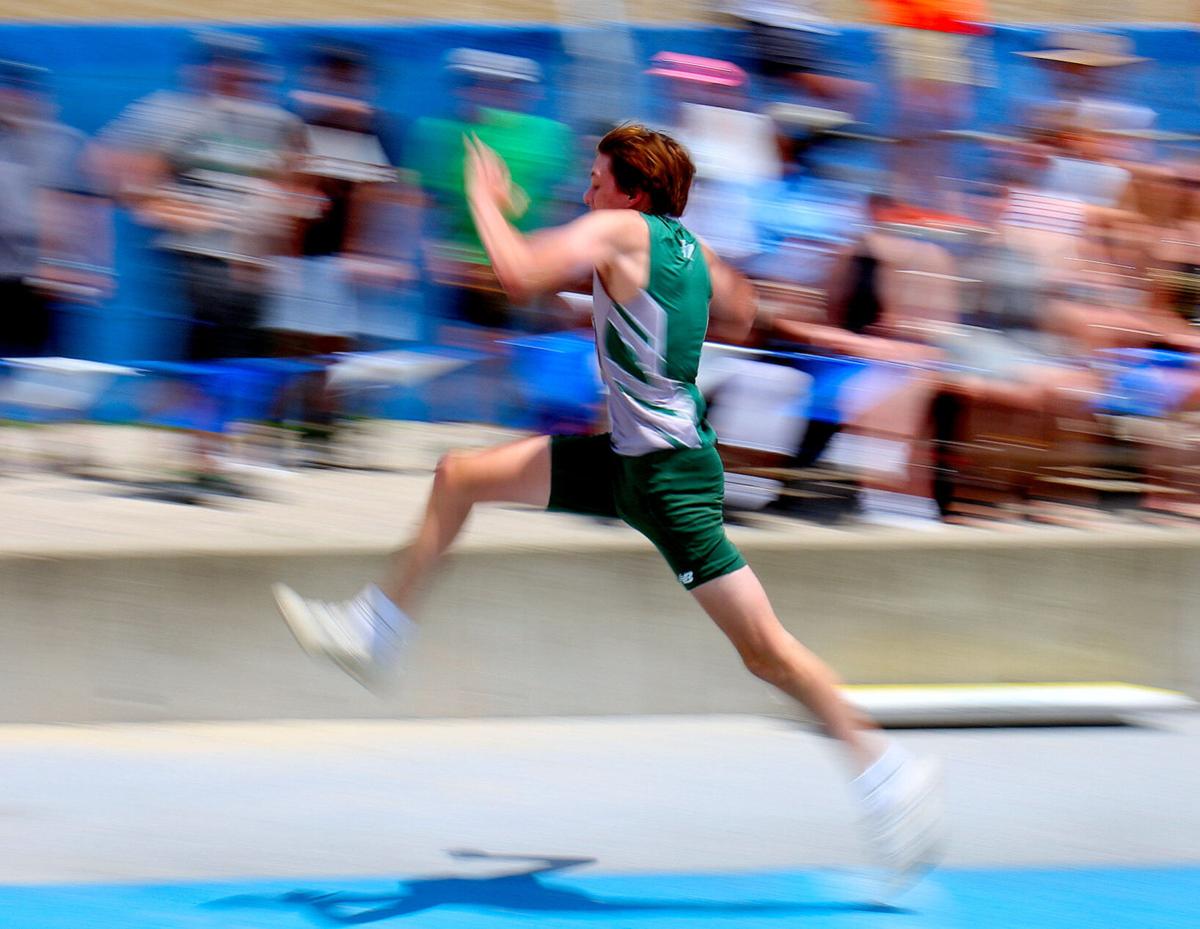 Geneseo's Karson Emry skips down the runway in the Class 2A triple jump Friday at the IHSA state meet in Charleston. 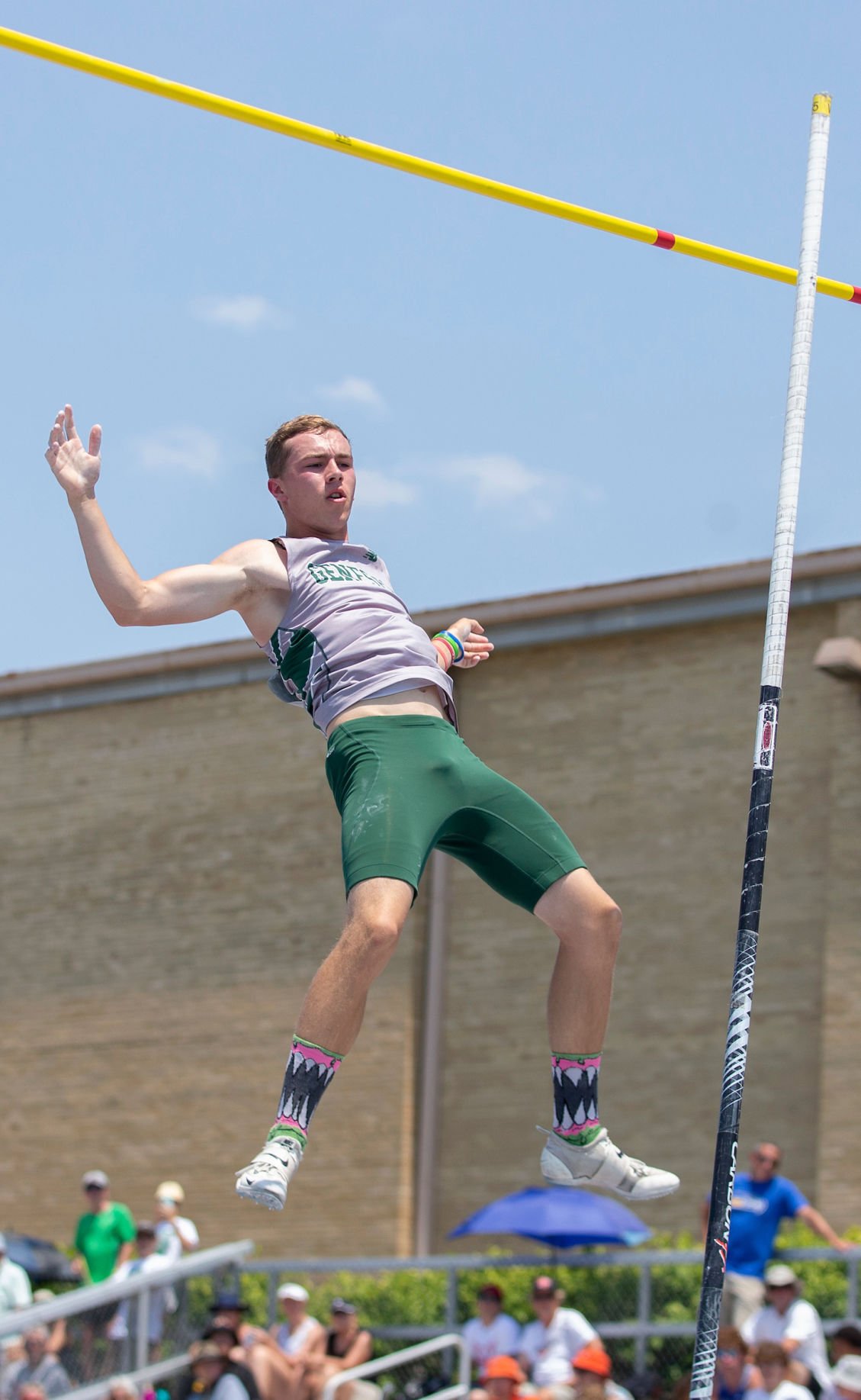 Geneseo's Malakai Schaad competes in the pole vault during the IHSA Class 2A state meet Friday in Charleston. Schaad broke his own school record and placed second in the event.

CHARLESTON — The state final for pole vault is something that Geneseo junior Malakai Schaad has been dreaming of all season. His dreams became a reality Friday afternoon.

Schaad finished second in the IHSA Class 2A pole vault with a final clearance height of 16 feet, and set a new school record that he broke earlier this season.

As the heat bore down on the competition, Schaad tried not to let outside factors affect his attempts throughout the day.

"It was a weird feeling waking up this morning in the dorms, which weren't exactly comfortable," Schaad said. "I feel very blessed to jump against this competition and at this high of a level.

"The heat was undesirable, but I was able to ignore it for a while and my coach brought a nice chair and umbrella for me."

On his last two height clearances of 15 feet, 9 inches and 16 feet, Schaad took all three attempts to continue through the competition. He felt energetic throughout all of his attempts on the day even with the heat, but expected there to be issues with his equipment.

"I'm still on the same poles that I've been on all year and surprisingly the heat didn't affect those poles as much," Schaad said. "I was expecting them to be a bit more mushy but they held up well."

Also earning a medal on the day from the local area is Kewanee sprinter Melcon DeJesus. He wrapped up his high school career with a fifth-place finish in the 400 and a sub 50-second time of 49.74.

The Illinois State commit is happy to end his career on a high note with a state medal.

"It felt good to come down here and run, even with the shortened season," DeJesus said. "I'm happy I was able to break 50 seconds again, but it would have felt a little better running in the top heat."

DeJesus ran in the next-to-last heat and won with his time, which was good enough to beat five of the athletes in the top heat. He felt that he showed off his physical shape in the race.

Cooper Schaad joined his brother on the podium in the pole vault with a ninth-place finish. He was happy with his performance as a freshman and surprised himself.

"It was super unexpected," Schaad said. "To be a freshman down at the state meet is impressive and to earn a medal is crazy."

For both of his athletes, Geneseo pole vault coach Arthur Atwell felt that they each wrapped up their season as best as they could.

"Malakai has been going for 16 feet at the last three meets and was close," Atwell said. "We took a middle step at 15 feet, 9 inches and the excitement of a state meet certainly pushed him to that next level. The weather by the end turned out beautiful for the final two vaulters and it was just a culmination of hard work and a great effort from both of our guys this season."

With Malakai just a junior and Cooper as a freshman, Atwell really believes that the sky is the limit for both Schaad brothers.

"The plan right now is for Malakai to go to the AAU Junior Olympics in Texas this summer," Atwell said. "After that, they''ll take some time off for some cross-training and then come Christmas we'll hit the training hard again."

For Cooper, his goals are pretty simple.

"I want to beat all of Malakai's records someday," Schaad said. "I just need to keep learning and growing over the next few seasons."

Geneseo's William Plumley was 14th in the 3,200 while Aiden Coppejans was 15th in the triple jump and Karson Emry finished in the same place in the high jump.

Kewanee's Xander Gruszeckza was 18th in the pole vault and the Geneseo 1600 relay team finished 18th.

Class 3A wraps up the three-day state meet on Saturday at O'Brien Stadium.

Geneseo track state champion, Ali Rapps, announced her commitment to Belmont on Wednesday. The tri-sport varsity athlete also advanced to state in tennis and has helped lead Geneseo to a No. 1 ranking in basketball.

Geneseo's Malakai Schaad clears the bar in the pole vault Friday afternoon at the IHSA Class 2A state meet in Charleston, Ill. Schaad finished second with a clearance of 16 feet.

Geneseo's Karson Emry skips down the runway in the Class 2A triple jump Friday at the IHSA state meet in Charleston.

Geneseo's Malakai Schaad competes in the pole vault during the IHSA Class 2A state meet Friday in Charleston. Schaad broke his own school record and placed second in the event.