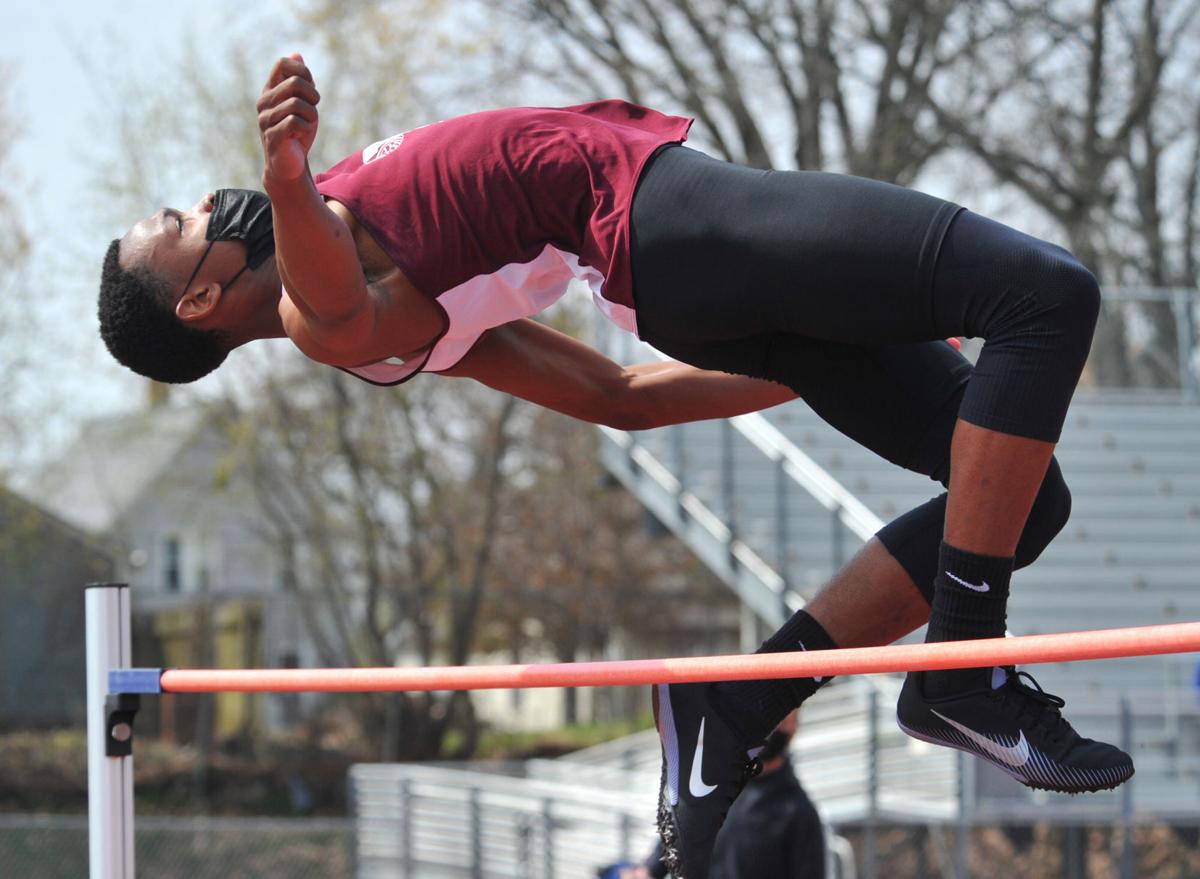 Moline's Rob Pulliam competes in the high jump event at the Gene Shipley Track in Moline during Saturday's boys track and field triangular. Pulliam won the event with a jump of 6 feet, 4 inches. 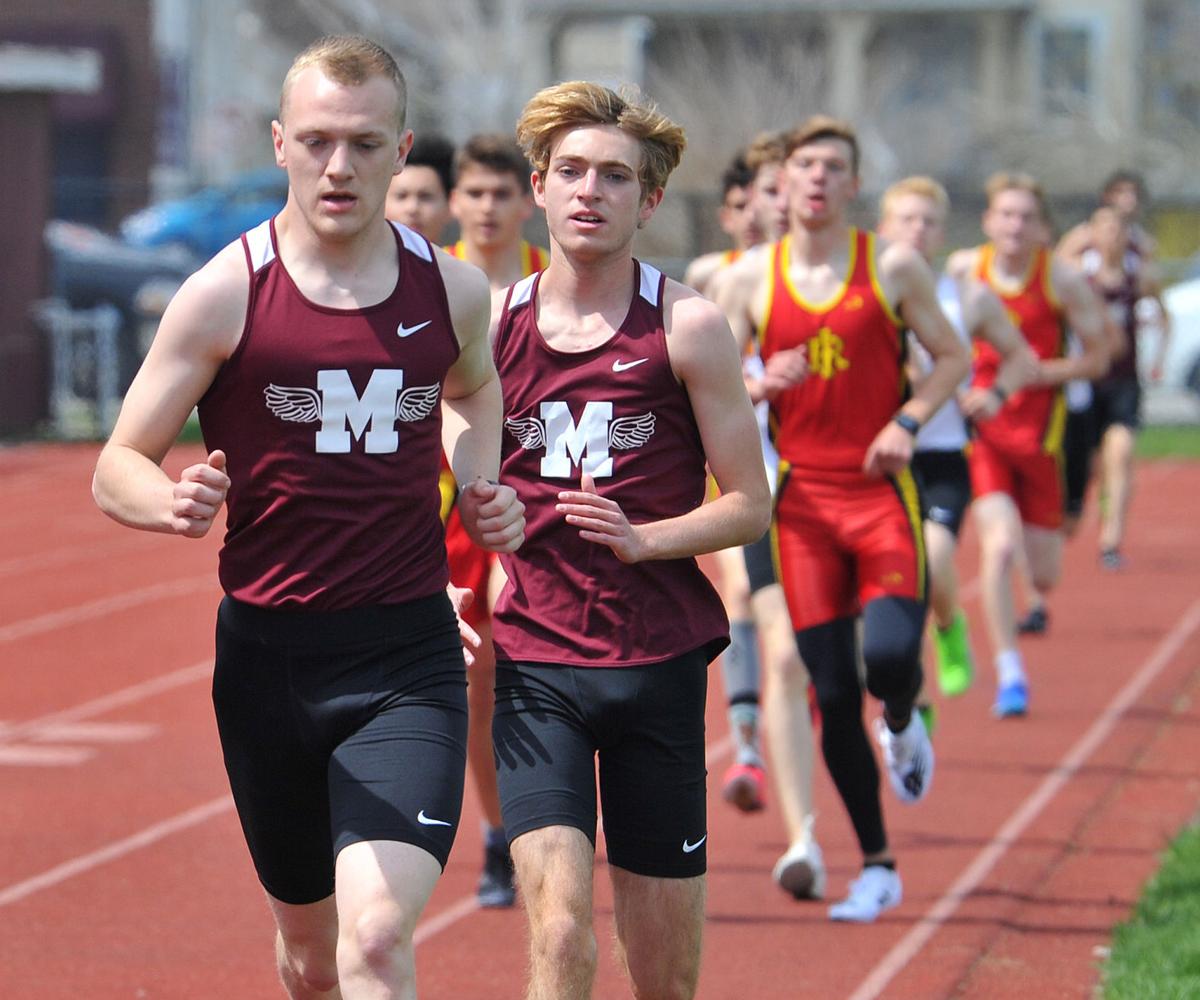 Moline's Jackson McClellan and Jon Hutton lead the pack in the 1600 meters at the Gene Shipley Track in Moline on Saturday. The two placed first and second, respectively, at the track and field triangular involving Rock Island, Moline and United Township. 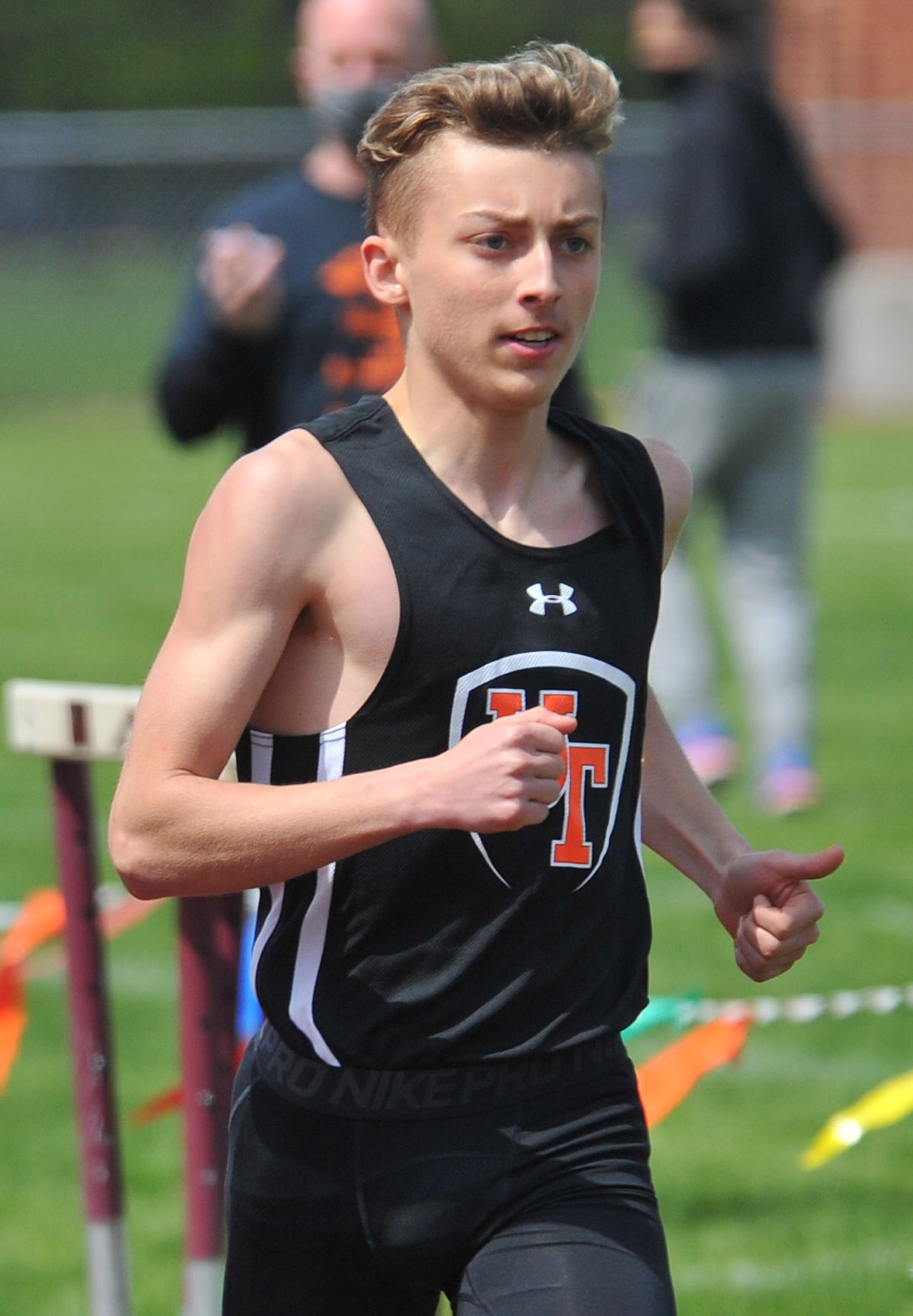 United Township's Logan Veloz comes in first in the 800 meters during a triangular meet at the Gene Shipley Track in Moline on Saturday.

Excitement and adrenaline filled the air at the Gene Shipley Track on Saturday for the first boys track and field meet of the season for Moline, Rock Island and United Township.

It's been nearly two years since any events had taken place, and many athletes were just happy to get back out into a meet environment that's hard to replicate in practice.

For Moline high jumper Rob Pulliam, it was his first high school track and field meet.

The junior basketball standout is known for his athleticism on the court and decided to give track and field a shot this year.

"Normally I focus on basketball in the off-season," Pulliam said. "I've wanted to do this for a while and thought, 'Why not this year?'"

Pulliam has been training as a high jumper for only one week. Still, he placed first with a jump of 6 feet, 4 inches — the state-qualifying height, which would have been good for sixth place at the 2019 3A state meet.

Coaches have been trying to teach Pulliam as much about his form as they can early on in the season so the junior can continue to improve. Pulliam is happy to put in the work.

"It's a fun event and I really like the competitiveness of everything," Pulliam said. "Now it's all about getting better and getting my form down and continuing to improve. I love it so far."

While it was a day for stretching out legs and getting back into the swing of things, several athletes were able to get personal bests in their events.

United Township junior Logan Veloz placed first in the 800 with a time of 2 minutes, 2 seconds, two seconds better than his previous best.

"The goal this year is to get under two minutes," Veloz said. "The state standard is around that time and I just wanted to come back out this year and give it my all."

Veloz competed at the sectional level in cross-country this fall but is excited to be back out on a track after the 2020 season was canceled because of the COVID-19 pandemic.

"I came into this year with my eyes big and set on the prize," Veloz said. "I'm ready to do whatever it takes to get to the state meet."

Rock Island's Samson Shukuru took home the gold in two of the three events he competed in on Saturday. The senior won the triple jump with a best jump of 43 feet, 1 1/2 inches, the long jump with a distance of 20-11, and was third in the 200 with a time of 22.51 seconds.

Shukuru had mixed feelings following his events but has his goals set high for this season after qualifying for state in 2019 in the long jump.

"At this point in the season I don't know how to feel," Shukuru said. "It's nice to get out after not doing much over the past year due to COVID. Today was a good start for the season, and hopefully I can aim for the school record in the long jump and triple jump."

As for his 200 performance, Shukuru shocked himself.

"I didn't know I could do that," Shukuru said. "That is definitely a personal best."

In the 1,600, Moline's senior distance duo of Jackson McClellan and Jon Hutton placed first and second, respectively, with times of 4 minutes, 36 seconds and 4 minutes, 49 seconds.

While neither of them reached personal bests, they were far ahead of the rest of the pack with third-place Shee Thaw coming in at 5 minutes, 19 seconds.

McClellan and Hutton have trained hard together for a few years now.

"I was excited to get out there today," Hutton said. "I've been wanting to get back out on the track for a while and it felt good. Jackson and I train together and I always try to stay with him. He pushes me and is also way better at pacing than I am so he keeps me in a good balance."

After losing his junior track season and not having a state meet for cross country in the fall, McClellan is shooting for the highest level this season.

"I was very bummed about not having a cross country state meet," McClellan said. "My performance at the state meet in cross county my junior year left a sour taste in my mouth and I want one last chance to go out and prove that I can run with the best."

CHARLESTON — As the final chapter of her high school career came to a close, Alleman pole vaulter Tori Thomas gave everyone watching her compe…

In a meet delayed nearly an hour when lightning spotted nearby, the ensuing rainstorm made for slick surfaces in the field events at Thursday'…

Geneseo girls track and field takes second place as a team with 60 points, just nine back from Chicago Latin at the IHSA Class 2A state meet on Friday.

The extreme heat and humidity didn't stop the local competition from collecting medals at Thursday's Class 1A state girls track and field meet.

ERIE — Back in the autumn, the Sherrard and Riverdale boys' cross country teams enjoyed a spirited postseason rivalry, finishing one-two at th…

Moline track and field athlete Corynn Holmes secured a state berth three times last Thursday at the Rock Island sectional in the high jump, 100 hurdles and 300 hurdles. The work isn't over, though.

CHARLESTON — With one last shot at her dream, all of the years of hard work for United Township track and field athlete Jade Hunter finally paid off.

Sherrard distance runner Mattie Kindelsperger takes the 3200 Class 1A state championship on Thursday with a time of 11:19.35.

Moline's Corynn Holmes qualified for state in the high jump, 110 hurdles and 300 hurdles, punching her ticket down to the IHSA 3A state meet in Charleston next Saturday.

Moline's Rob Pulliam competes in the high jump event at the Gene Shipley Track in Moline during Saturday's boys track and field triangular. Pulliam won the event with a jump of 6 feet, 4 inches.

Moline's Jackson McClellan and Jon Hutton lead the pack in the 1600 meters at the Gene Shipley Track in Moline on Saturday. The two placed first and second, respectively, at the track and field triangular involving Rock Island, Moline and United Township.

United Township's Logan Veloz comes in first in the 800 meters during a triangular meet at the Gene Shipley Track in Moline on Saturday.