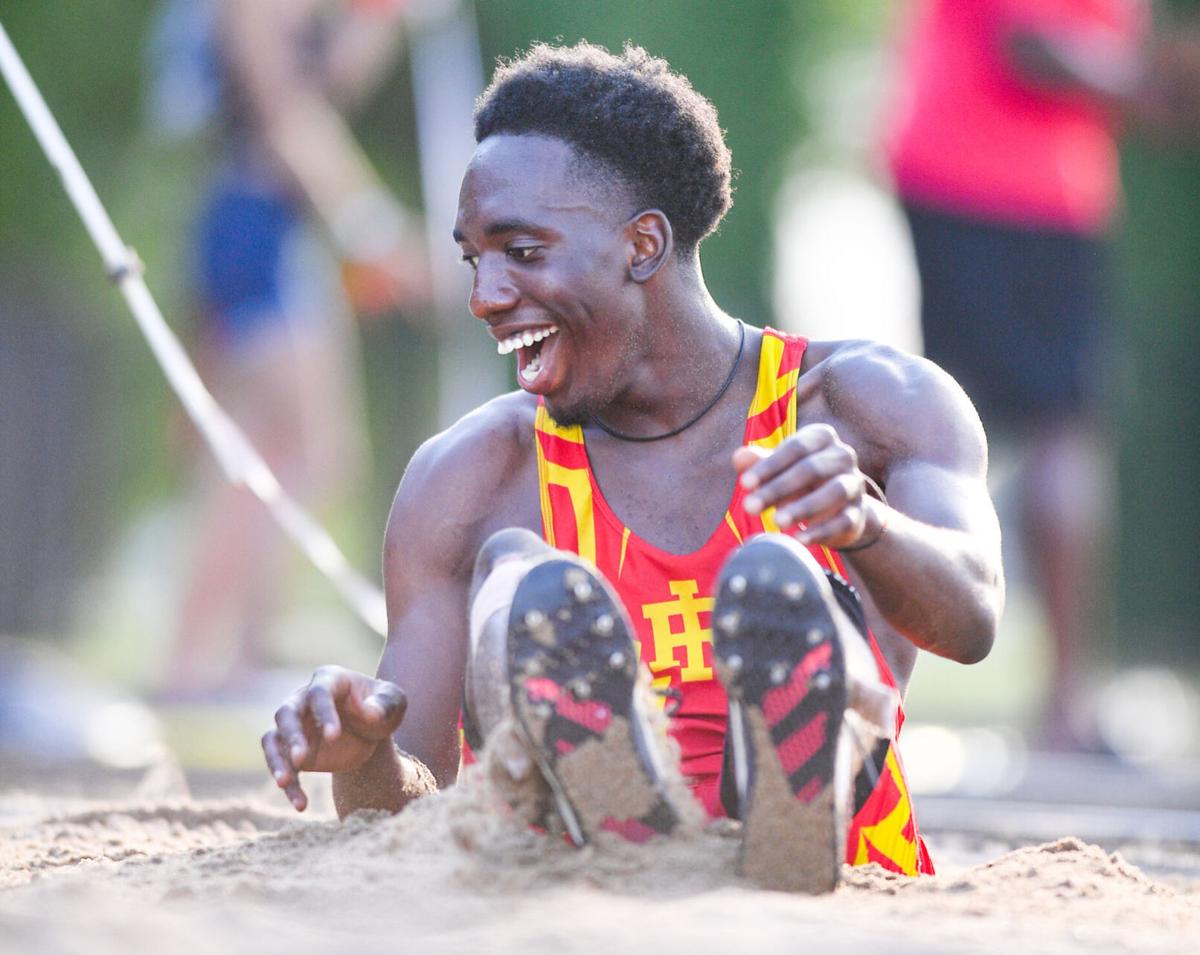 Rock Island’s Samson Shukuru smiles as he competes in the triple jump during the Class 3A sectional track meet at Almquist Field Thursday in Rock Island. 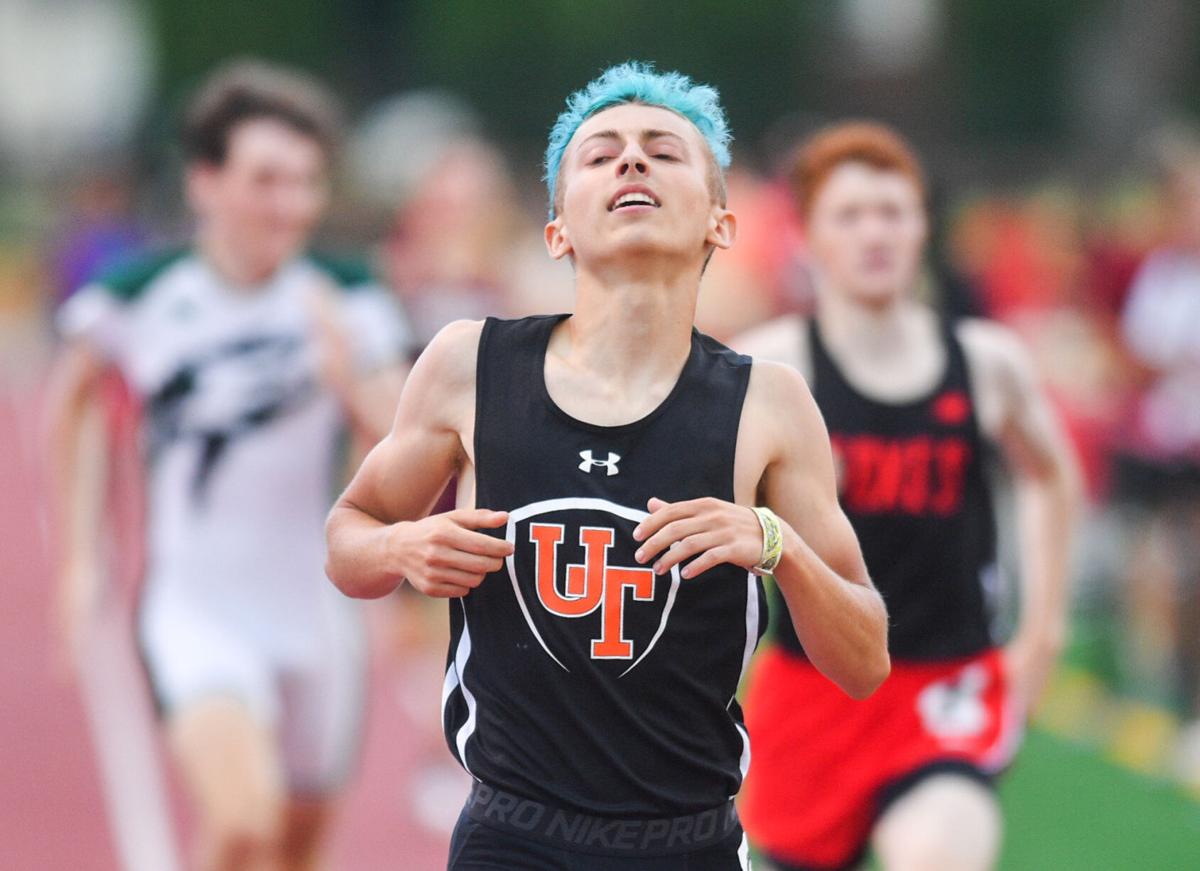 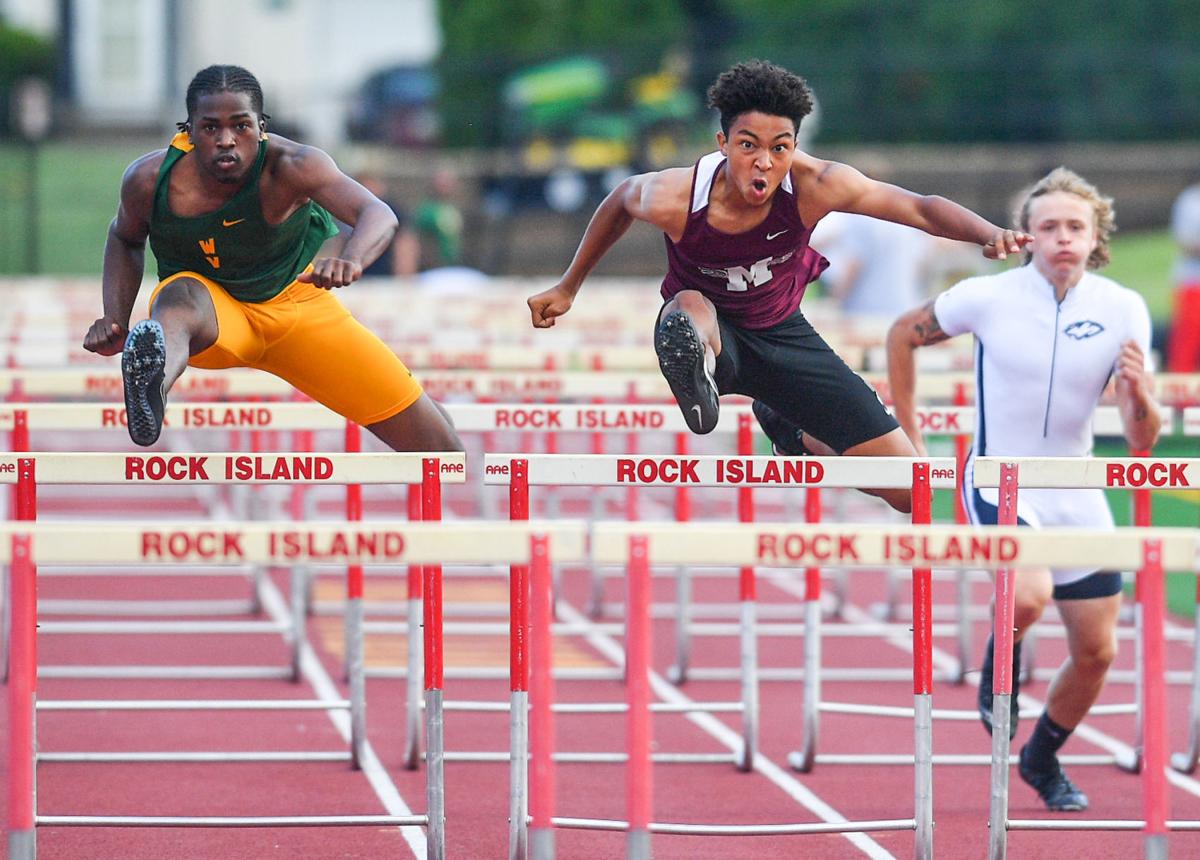 Moline’s Saiheed Jah, center, competes in the 110 meter hurdles during the Class 3A sectional track meet at Almquist Field on Thursday in Rock Island. Jah qualified for state in both the 110 and 300 hurdles.

In a meet delayed nearly an hour when lightning spotted nearby, the ensuing rainstorm made for slick surfaces in the field events at Thursday's Class 3A Rock Island Sectional boys track and field meet.

Rocky senior Samson Shukuru made the best of it.

had a big meet for the Rocks, qualifying in both the long jump and triple jump after placing second in each. He also joined RI’s second-place 400 relay with Darrell Woodson, Darius Tongo, and Jayden Bomelyn.

Shukuru, who qualified for long jump as a sophomore, said he felt lucky to qualify in each event after slipping off the board in his first attempt at the long jump Thursday. Teammate Jordan Rice placed third.

“I pretty much just slammed my body, and that took a lot out of my legs,” he said. “I just got lucky there.”

Shukuru said it was hard to breathe at the hot and humid meet, but he and others fought through it.

“I’m grateful,” he said of qualifying in three events.

Moline coach Tauwon Taylor was proud of how his team stepped up in the sweltering heat.

Moline was without senior Jackson McClellan, who has been dealing with strange fatigue symptoms after the Big 6 meet. The distance runner said he is having tests done to figure out what may be wrong before he heads off to the Navy.

The Maroons were also without Boukary Mbengue, who was injured.

Despite that, Moline had a number of state qualifiers. Sophomore Saiheed Jah nailed the state mark of 15.15 and placed third in the 110 hurdles and won the 300 hurdles in 39.53. He overcame the heat to top his previous personal best of 40.19 in the 300 hurdles.

“Our guys, we ran our tails off today,” Taylor said. “They left nothing on the track. They gave it their all. It was max effort today and that’s what we had to do. It was an exceptionally warm today, not just for us but for everybody.”

Earlier in the day, the high jump featured some competition between cousins as Moline’s Rob Pulliam and UT’s Adreian Roper were among the final ones standing. Pulliam won the title with a leap of 1.95 meters in his first year in the sport, while Roper saved his best jump for last.

Roper nailed his final attempt at clearing 1.90, matching the state standard to finish in a three-way tie for third.

“It was hard,” Roper said. “I had to really bring myself together. I had to calm down. I was kind of worried about it, but I just jumped and did what I did.”

His personal best this season is 1.93. He adjusted his takeoff point before hitting his final attempt to reach state to earn the congratulations from his teammates after the clutch leap.

“It was great,” he said. “I haven’t felt better. Making it to state with a good jump, the last jump; it could have been my last jump of the season. But instead, I made it, and continued it.”

It’s been beneficial competing against his cousin Rob, the Western Big 6 Conference high jump champion who broke out in his first meet of the season.

“It makes everything just that much better if I do well,” Roper said. “We always played each other in basketball and stuff. I would see him and his dad all the time when I was with my dad.”

Joining Roper at state is UT’s Logan Veloz, who placed third a couple seconds under the state cut at 1:55.78 in the 800.

Pulliam said qualifying for state was not something on his radar when he first picked up the sport after basketball season. He hopes to top his PR of 2.03 at state.

“I’m not where I want to be at, but it kind of just all came together,” he said. “It’s crazy to me, just because it’s my first year. I’ve never competed in an actual track meet before this season. I’m still kind of shocked, like wow, I’m going to state. … I’m proud of myself.”

What is the New York Giants ceiling this season?

Are the Eagles and Texans close on a deal for Deshaun Watson?

Are the Eagles and Texans close on a deal for Deshaun Watson?

Rock Island’s Samson Shukuru smiles as he competes in the triple jump during the Class 3A sectional track meet at Almquist Field Thursday in Rock Island.

Moline’s Saiheed Jah, center, competes in the 110 meter hurdles during the Class 3A sectional track meet at Almquist Field on Thursday in Rock Island. Jah qualified for state in both the 110 and 300 hurdles.