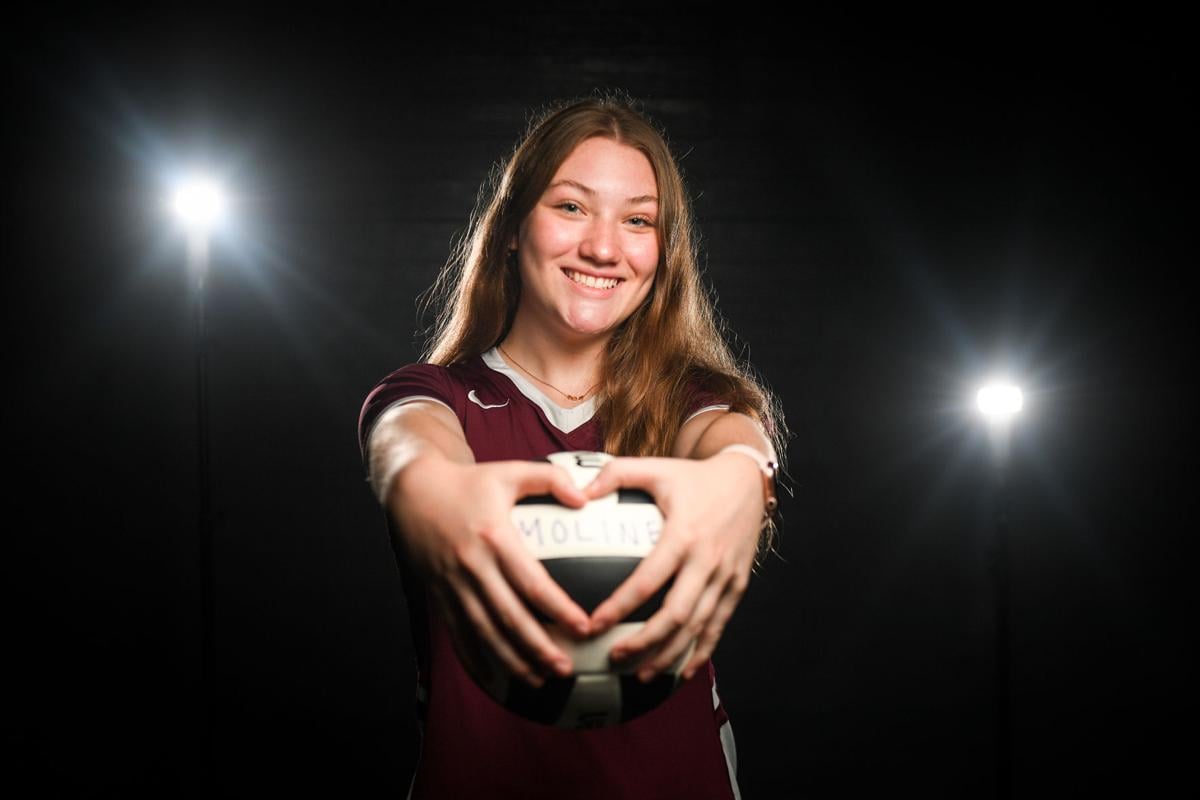 Moline senior volleyball player Ella Ramsay is this week’s Illinois Pacesetter. Ramsay has helped the Maroons to an 11-0 mark in conference play. 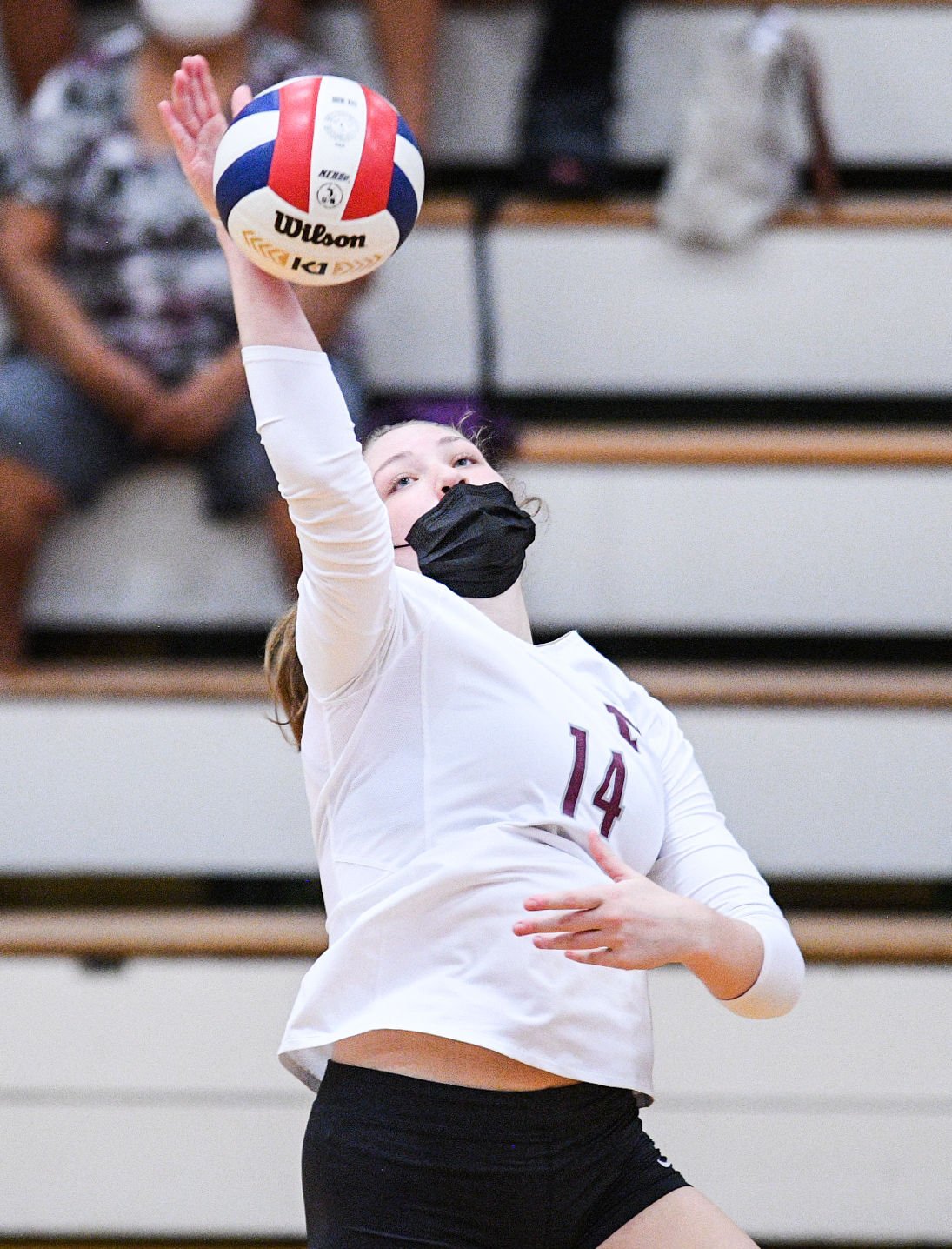 Moline's Ella Ramsay, a Loyola Chicago signee, is the Illinois Quad Cities player of the year. Ramsay had a team-high 285 kills and 67 service aces for the Maroons en route to a Western Big 6 Conference championship. 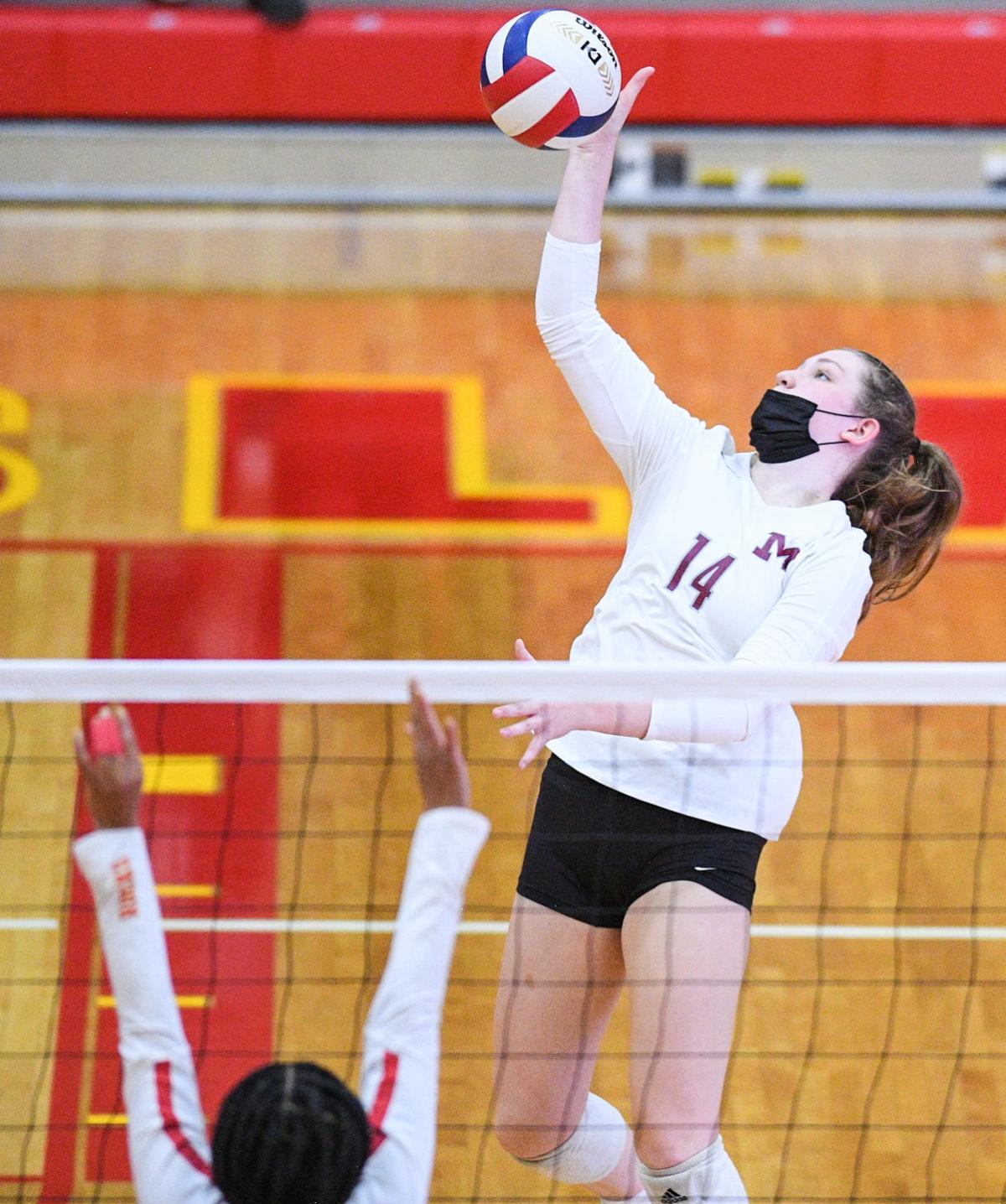 Moline's Ella Ramsay hits an attack during Tuesday night's match against Rock Island. Ramsay, a Loyola recruit, has steered the Maroons to the top of the Western Big 6 Conference this fall.

When Ella Ramsay’s mother, Elizabeth, signed her up to play volleyball, Ella was furious.

Ramsay was 12 at the time and loved basketball. She thought it was the sport she would spend her future enjoying and getting better at.

But once eighth grade came along, Ramsay dropped basketball for the sport her mom made her get in into. It proves again that mother actually may know best.

“It’s a funny story now because when I went and tried out for my first club team, I was really mad at my mom,” Ramsay said. “I really wanted to play basketball and I knew that if I did volleyball, I’d have to quit other sports. I was really upset with her, but it turned into my favorite sport ever. I’m happy she did that. After that first year I just knew that this is what I wanted to be doing.”

It would be a decision that would turn out to benefit not only Ramsay and her family, but her club and high school teams.

Ramsay, this week’s Illinois Pacesetter, started as a freshman at Moline and has grown into playing all six rotations. She has been at the forefront of the Maroons' perfect 11-0 WB6 record and now Moline is on the brink of a conference title.

“Switching to a six rotation and outside hitter as a junior was really intimidating,” Ramsay said. “It was really frustrating at first. I stayed after in the gym a lot. I feel like I knew that I had to work on passing because it's something that I wasn't super strong at. I needed to stay disciplined and positive because nothing comes right away.

"And now I feel like I'm a lot more confident. I'm more comfortable back there. I'm not as nervous when I'm passing.”

Outside of learning new positions, Ramsay realized she suddenly had no time to rest. She was now expected to spend the entirety of the match on the court.

“I don't think people realize the stamina that it takes to compete in volleyball,” Moline coach Sarah Fetter said. “Being a three-rotation player is challenging enough, but when you add playing an additional three rotations in the back row, it's a lot of hard work. She put in the training last season, both before and after practice and worked really hard at it. It’s paid off this year.”

Paid off is putting it lightly.

The stats are impressive, Ramsay has 142 digs (7.1 per match) and 32 aces in 20 matches, but her leadership on the court is what makes her so special. The 6-foot-1 senior is always in the middle of a play, whether it be on offense or defense.

A quality that earned her a scholarship to continue playing volleyball at Loyola University in Chicago. Something she wasn’t aware she was capable of until those around her noticed the potential.

“People were very complimentary of me and I guess I didn’t really realize how ahead of the game I was for my age,” Ramsay said. “I sat down with my parents and we just kind of went through the pros and cons and we decided that playing volleyball in college is what I really wanted to be doing.”

Outside of volleyball, Loyola is known for its academic prestige.

Ramsay ranks high in her class at Moline and academics were an important part of her college decision. She spent a large portion of her summer reading books, which she claimed was lame, but it’s a trait that shows the type of person Ramsay is. She says her future plans are to attend medical school, where she can work towards being an OB-GYN.

“That’s kind of been my thinking since I was in like eighth grade,” Ramsay said. “I have always been stuck to the idea of medicine. I want to be working in a hospital. I want to be helping others.”

That helping personality shows on the volleyball court as well.

Fetter admits that Ramsay was a little quiet or soft spoken before this past year, but this season has really begun to show her emotion on the court. It’s allowed her team to rally behind her as a natural leader in the small celebrations after every point.

“She’s definitely come out of her shell a lot more,” Fetter said. “She’s a person that’s really stepped up as a leader this year. Ella is definitely a player who leads by example, but she’s worked really hard to be more vocal and that kind of ‘rah rah’ player that every team needs to keep the momentum going to get out of tough situations.”

Those leadership qualities were on full display Tuesday during Moline’s biggest match of the season.

The Maroons knocked off Rock Island in straight sets on the road to improve to 11-0 in WB6 play. Ramsay had a team-high seven kills and four aces. She was dominant from start to finish, quite literally. She started and ended the game with a kill. But it was her celebrations after every kill that seemed to spark the Maroons, even when things got dicey late in the second set.

“I like to take action and sometimes when we are in a little bit of a rut, I’ll tell my setters to just get me the ball because I have the confidence that I can put it away,” Ramsay said. “I just try to keep everybody mentally intact. But I’m very lucky to have the team I have. We are all leaders.”

The mental part of the game is where Ramsay excels.

In what was essentially the conference championship Tuesday at Rock Island, Ramsay’s mental toughness was a major part of the game. When Ramsay hit a ball into the net or out of bounds, she was there to reassure her team. When Ramsay got going and slammed a kill into the face of a defender, Rock Island seemed dazed for the remainder of the set. It was a stark contrast between the teams on opposite sides of the net.

“I think she’s so successful because of her mindset,” Fetter said. “She does a great job of moving past the mistake and to the next point. She's always been wanting to improve or wanting to learn and get better.”

And Ramsay’s best season to date has Moline in its best position to win an outright conference title for the first time since Ramsay’s freshman year, when only six teams were still in the conference.

“To come back senior year full circle and get first again would be amazing,” Ramsay said. “It would show this team that we are actually that good. I think we are better than we think. And we have potential to get even better.”

Favorite book: The Hate U Give by Angie Thomas

Moline senior volleyball player Ella Ramsay is this week’s Illinois Pacesetter. Ramsay has helped the Maroons to an 11-0 mark in conference play.

Moline's Ella Ramsay, a Loyola Chicago signee, is the Illinois Quad Cities player of the year. Ramsay had a team-high 285 kills and 67 service aces for the Maroons en route to a Western Big 6 Conference championship.

Moline's Ella Ramsay hits an attack during Tuesday night's match against Rock Island. Ramsay, a Loyola recruit, has steered the Maroons to the top of the Western Big 6 Conference this fall.