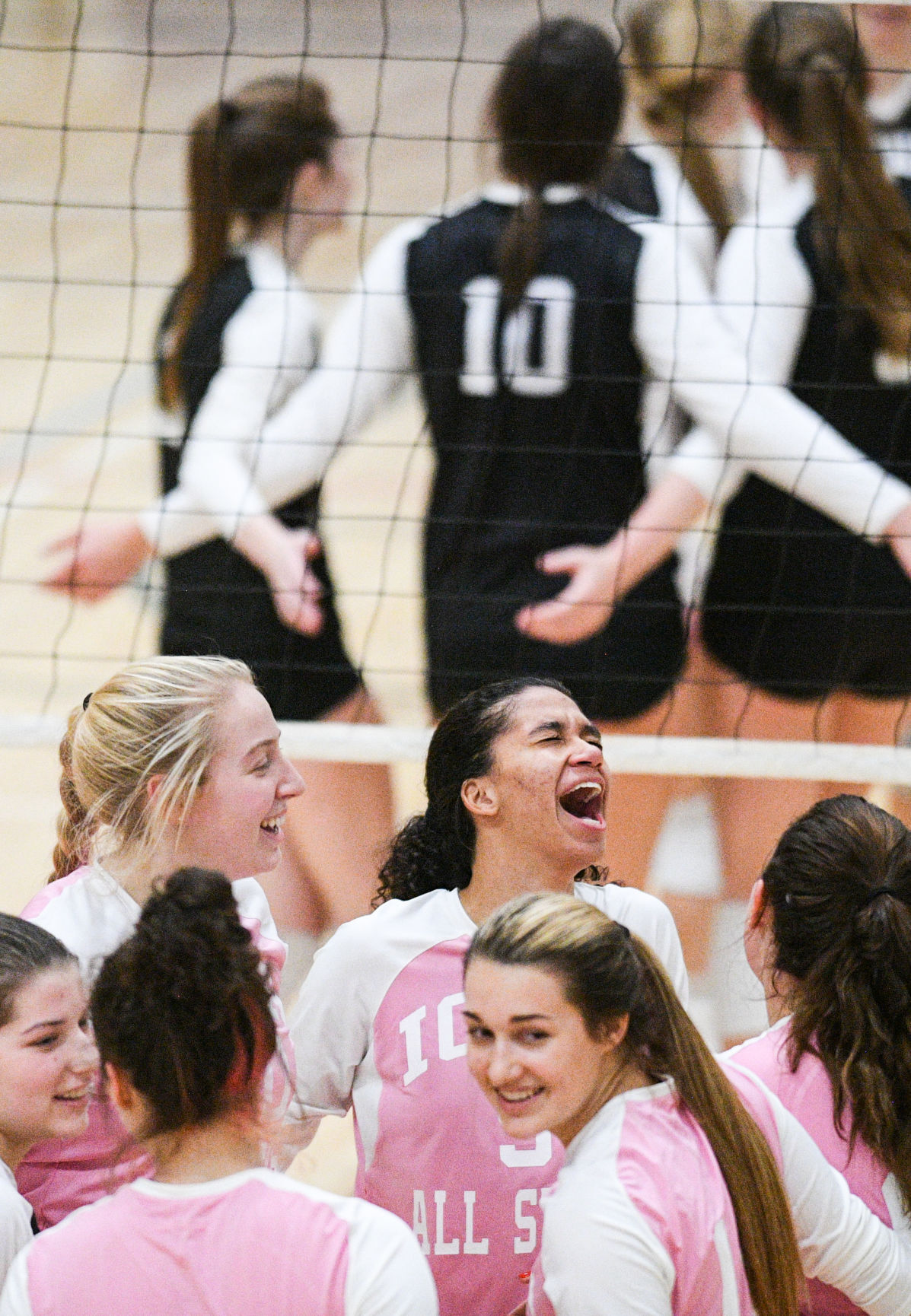 North Scott’s Grace Graham (9) and teammates celebrate scoring a point against the Illinois squad during the seventh annual Illinois vs. Iowa All-Star volleyball match at Beyond the Baseline on Monday in Davenport. Iowa won in straight sets. 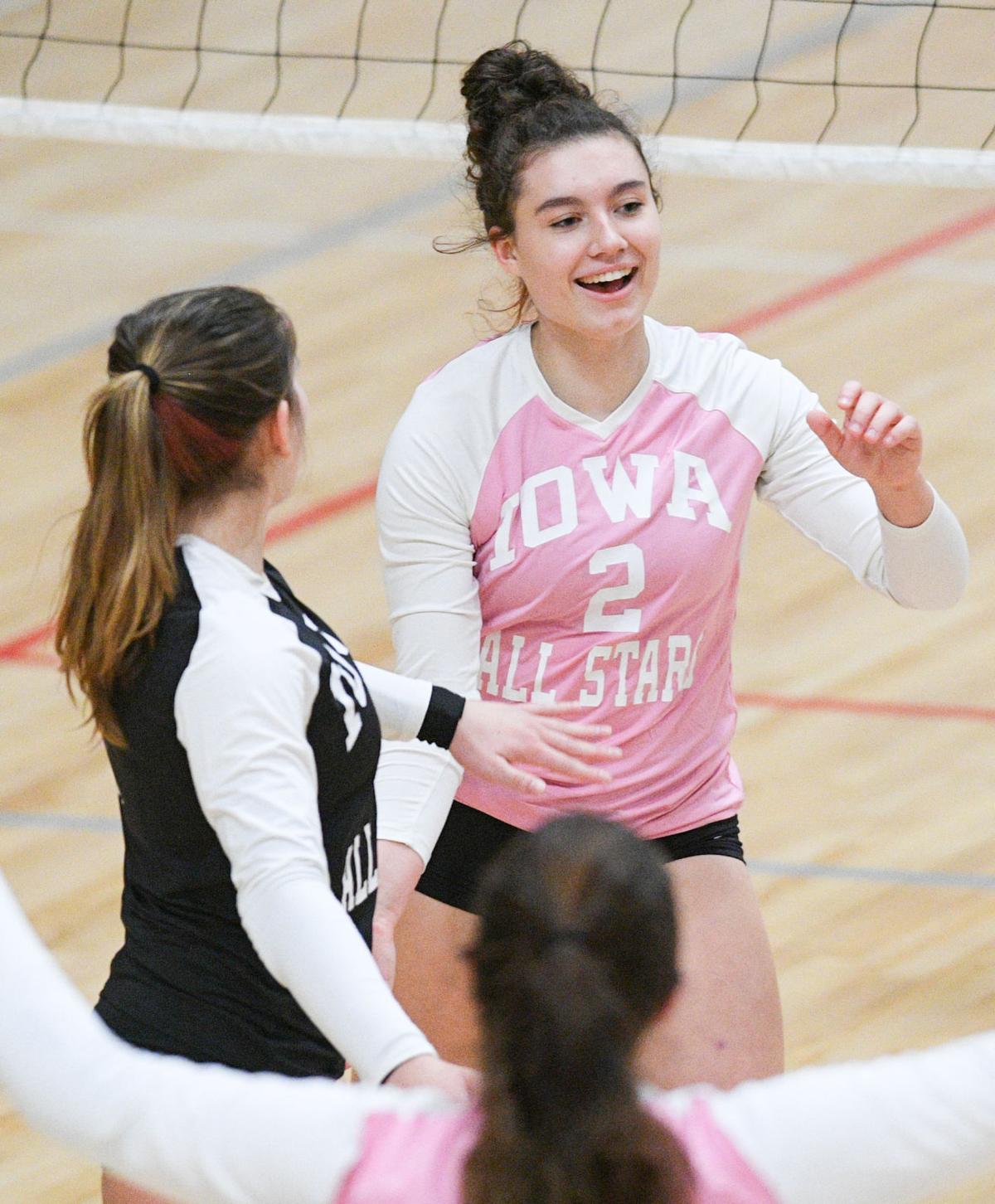 Assumption’s Carly Rolf (2) and teammates celebrate a point scored against the Illinois squad during the seventh annual Illinois vs. Iowa All-Star volleyball match at Beyond the Baseline on Monday in Davenport. 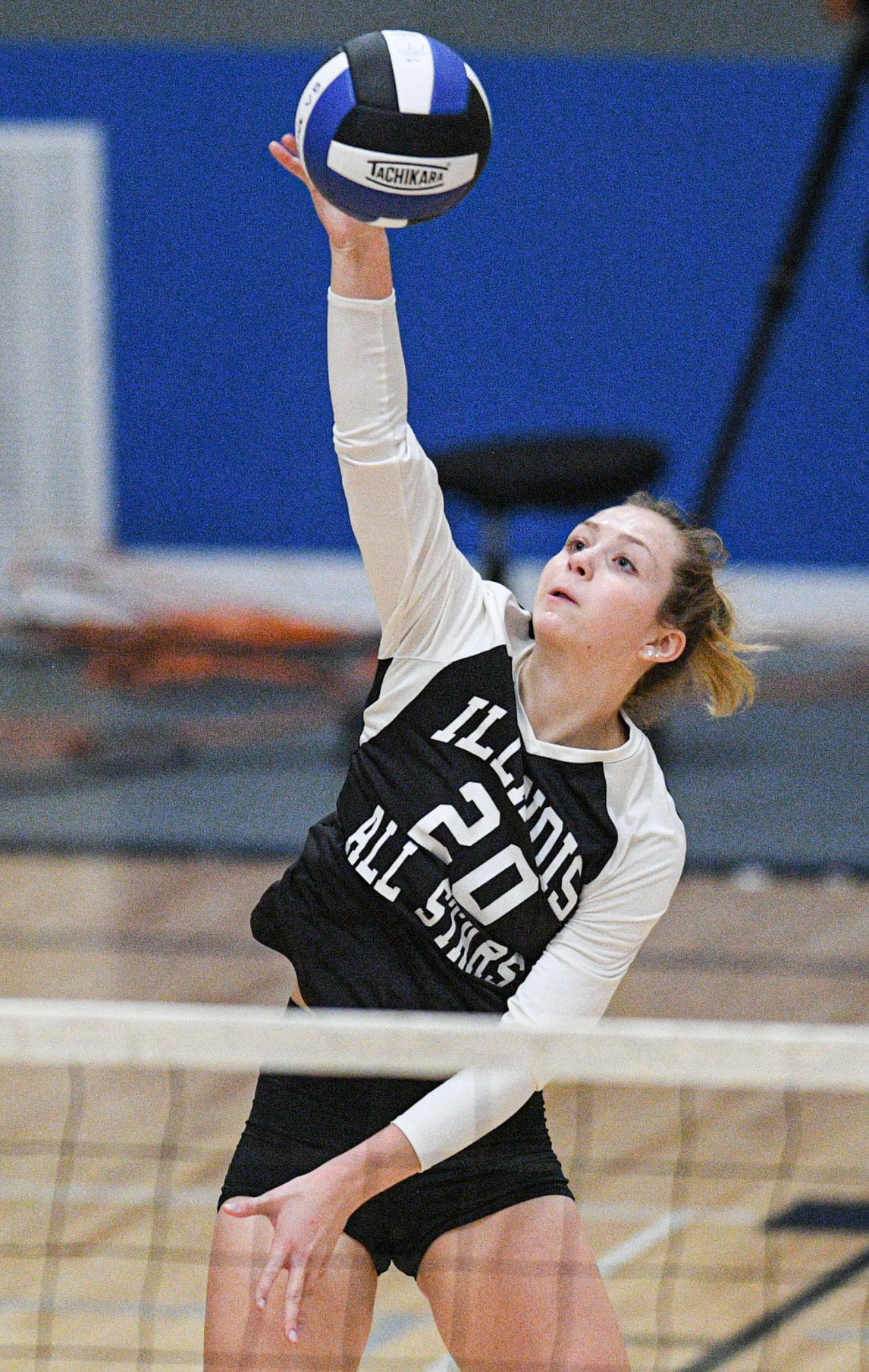 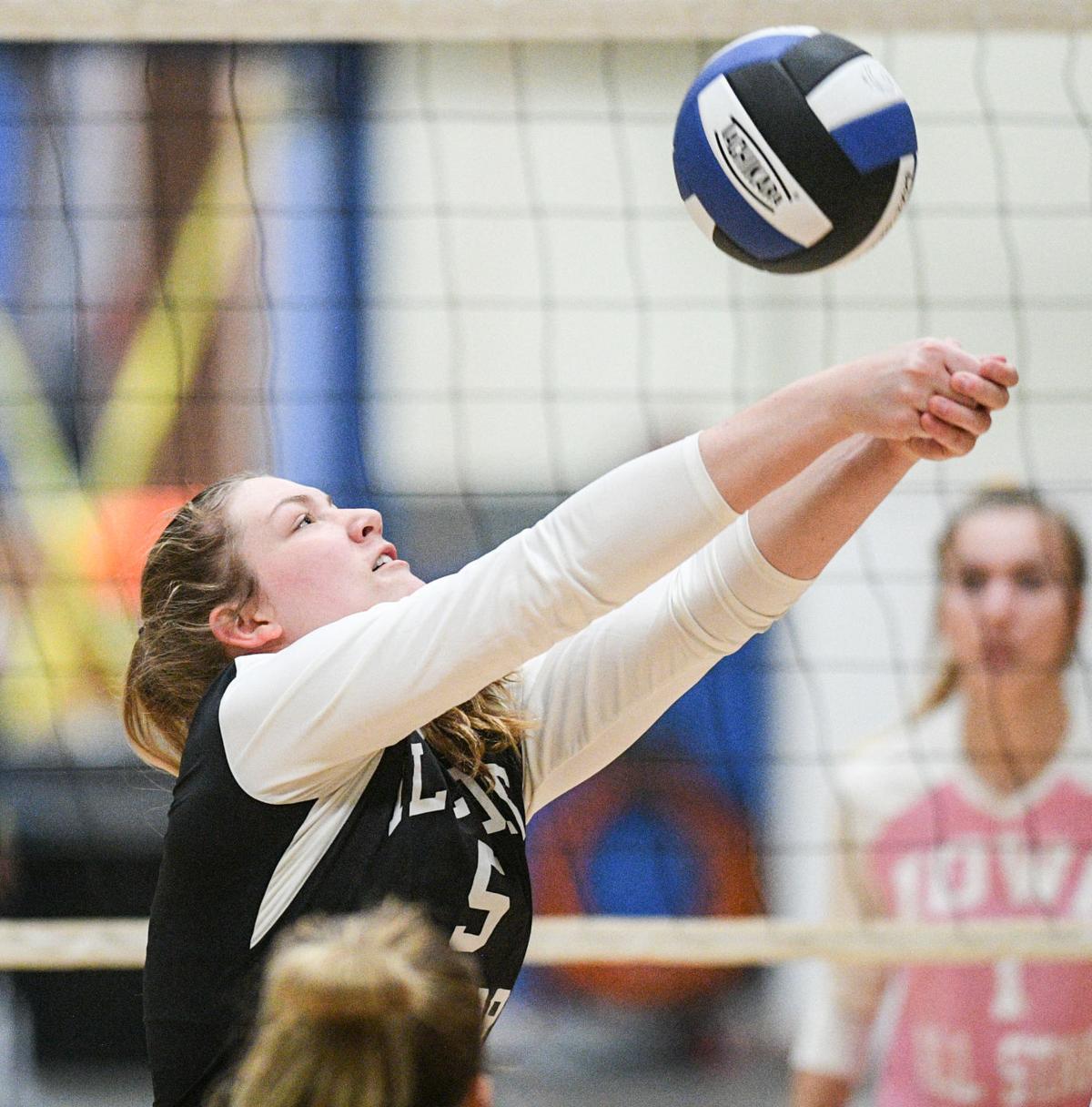 Moline’s Ella Ramsay (5) bumps against the Iowa squad during the seventh annual Illinois vs. Iowa All-Star volleyball match at Beyond the Baseline on Monday. Ramsay led the Illinois side with 13 kills.

During Monday night's Iowa versus Illinois Senior All-Star match, the first team All-Mississippi Athletic Conference setters had a chance to play different positions on the court and finish points.

"When I found out I was playing back row, I was like I haven't done that since 14U volleyball," Rolf said. "That was really fun to get that opportunity again."

Even put in some unfamiliar spots, Iowa continued its dominance over its border rivals 25-19, 25-18, 26-24 at Beyond the Baseline.

The victory moved Iowa to 7-0 in the event, which features the top seniors from the Mississippi Athletic Conference, Western Big 6 Conference and Illinois area.

"It just shows our drive on the Iowa side," PV senior Arra Cottrell said. "Illinois is a great team with great competitors. We had more weight on our backs (with the streak), but we handled it well."

Cottrell had 11 kills to lead Iowa. Rolf, who averaged more than 9.5 assists per set in Assumption's run to the state semifinals, had nine kills while Davenport Central's Lily Campbell finished with seven.

Ruff, who etched her name into the PV record books with 3,262 career assists and led the Spartans to their first state championship earlier this month, did plenty of setting in this match with 24 assists. She also had an opportunity to hit from the right side.

"It was fun to do something different, try new things," she said. "It took me a little bit to get warmed up to it, but it was fun."

Illinois was competitive throughout the match. It struggled closing out sets.

Iowa used a 5-1 flurry late in the first set to seize control. It broke free from a 19-17 score in the second set with six of the last seven points.

Illinois had four set points in the third set, but Iowa erased a 24-19 deficit with seven consecutive points to close out the match.

"I don't know if it was because we were tired or got confused with things," Moline's Ella Ramsay said. "I felt for the most part we stayed composed and played a lot better than we thought we would.

"It was just fun to put on those knee pads and shoes one more time for high school."

It was a night reserved for forming friendships, rekindling old ones and making memories.

Besides a volleyball match that lasted around 90 minutes, there was a dance off between sets. That ended in a draw.

Afterward, the sides came together and posed for photographs.

"These are memories I'm going to have forever and I'll be able to tell everyone about," Rock Island senior Emily Allison said. "Hopefully, some of my (younger) teammates from high school were here and it inspires them to continue on and get here one day.

"The dancing and everything, it just adds fun to it."

Many of the girls have been friends through club volleyball. Rockridge's Kierney McDonald and Assumption's Bri Gartner will be teammates and roommates next fall at Wisconsin-Platteville.

For others, it was a chance to compete against players they have battled against for the past four years.

"The only girls I really knew were Arra and Liv (Thomsen) from PV, so it was really fun to meet them all and talk about how their high school seasons went," Ruff said. "To play with different players from the MAC was cool."

Ramsay, off to play at Loyola Chicago next fall, had 13 kills to pace the Illinois side. Allison finished with seven and Geneseo's Hannah Copeland collected five.

"Most of these kids we either know based on playing them in club or we play against them during the season," McDonald said. "To be on the same side as some of them was really, really cool."

Even with the lack of practice time and familiarity, Ramsay felt both sides handled it well.

"That's what it means to be an All-Star," she said, "being able to adapt to any situation you're in, trial and error through sets and points.

"You just need to figure it out as you go."

"It was just a lot of fun," Graham said. "We didn't talk very much the first set, but our communication got better as the sets went on. It really helped us."

Only one more win stood between the Annawan volleyball squad and its second IHSA regional title in the last three postseasons.

North Scott’s Grace Graham (9) and teammates celebrate scoring a point against the Illinois squad during the seventh annual Illinois vs. Iowa All-Star volleyball match at Beyond the Baseline on Monday in Davenport. Iowa won in straight sets.

Assumption’s Carly Rolf (2) and teammates celebrate a point scored against the Illinois squad during the seventh annual Illinois vs. Iowa All-Star volleyball match at Beyond the Baseline on Monday in Davenport.

Moline’s Ella Ramsay (5) bumps against the Iowa squad during the seventh annual Illinois vs. Iowa All-Star volleyball match at Beyond the Baseline on Monday. Ramsay led the Illinois side with 13 kills.