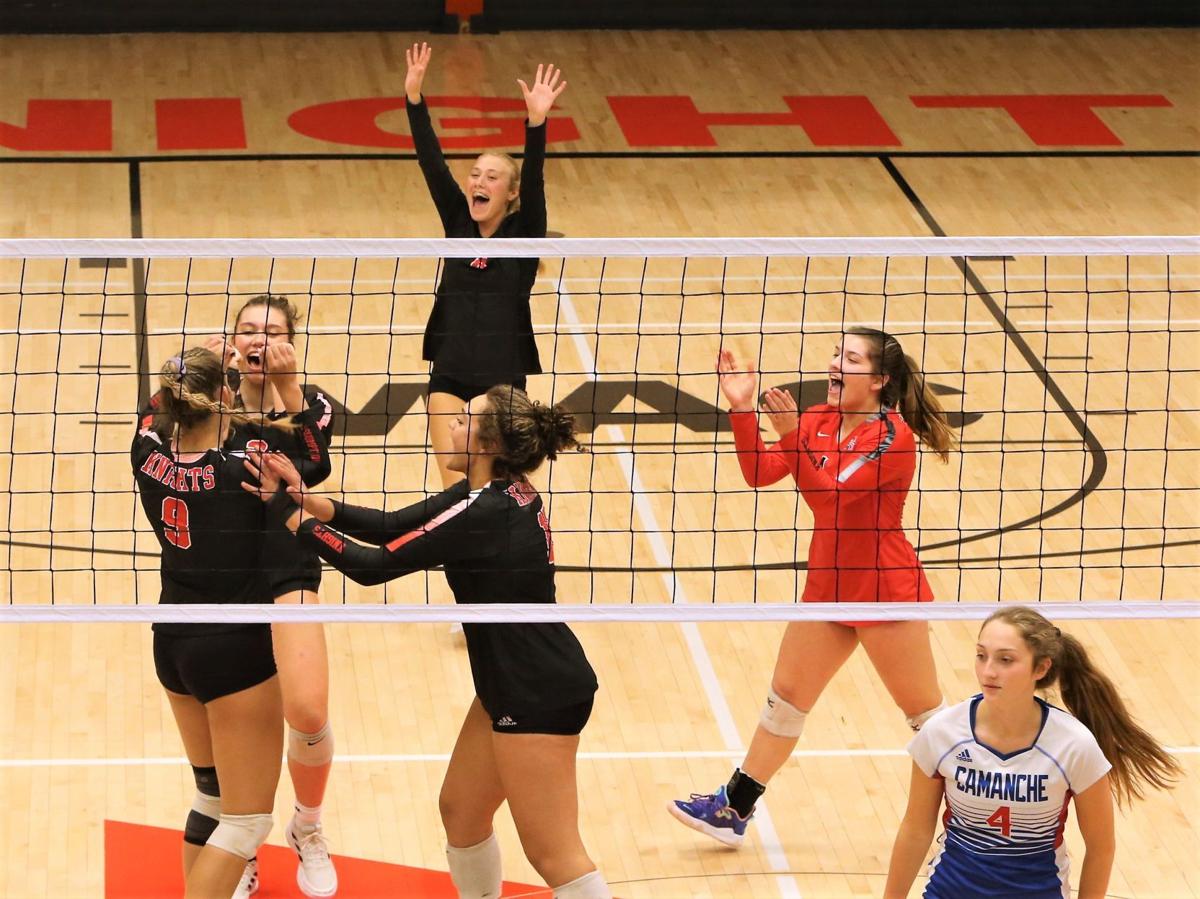 Assumption volleyball players celebrate a point against Camanche in a Class 3A regional quarterfinal Monday at Assumption High School. 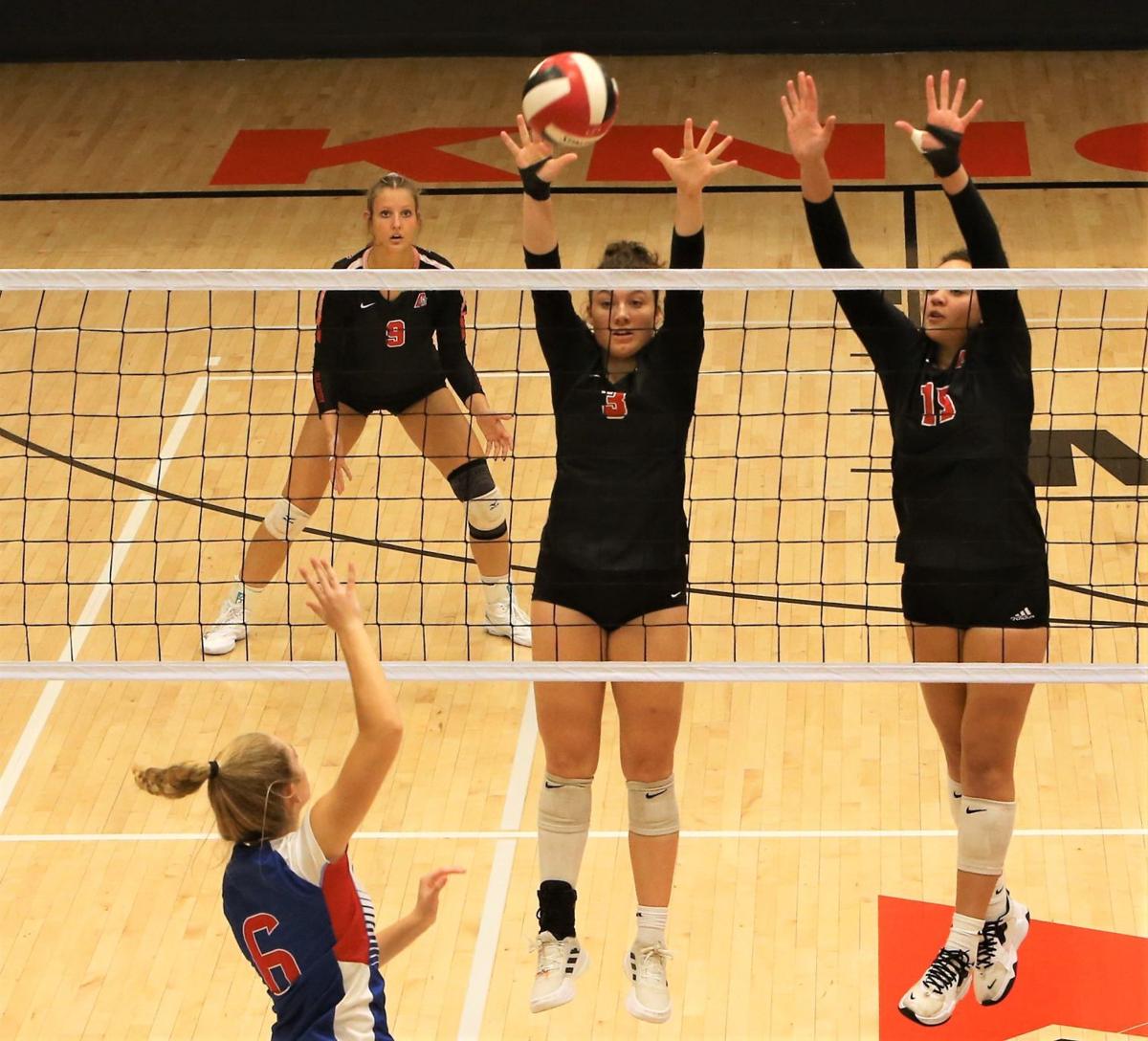 Assumption's Carly Rolf (3) and Ava Harris-Shepard (15) go up for the block in front of Camanche freshman Miley Duritza in a Class 3A regional quarterfinal Monday at Assumption High School.

When Davenport Assumption’s A.J. Schubert spiked down a kill in the third set of Monday’s Class 3A Region 7 quarterfinal against visiting Camanche, it pushed the Knights to a 23-9 lead as they closed in on match point.

It didn’t seem to be a meaningful moment in a match where the Knights were in control the entire way.

But after the point, Schubert’s teammates and coaches stood up on the sideline and cheered. One of her teammates held up a small sign.

The sign congratulated Schubert on her 1,000th career kill.

“We had a little countdown going on,” Assumption head coach Bre Scherler said. “We try not to let our athletes know that that’s happening. That’s why we had a side conversation with our setter and said, ‘Just get it done and feed her the ball.’ I think she was sort of surprised, wondering why the ball kept coming to her. We were pretty decently in system.”

“I wasn’t expecting to get it tonight,” Schubert said. “But I knew I was pretty close. Then I noticed that my setter started setting me more.”

One of Camanche’s two starting setters was out with illness, and it showed up in the Storm’s serve receive. Isabella Krogman served five aces for the Knights, while Schubert and Brianna Gartner had four apiece.

“We knew it was going to be tough,” Camanche head coach Heather Clark said. “I’m just really proud of the girls. They didn’t give up. Even though the score didn’t reflect it, they worked their butts off.”

Carly Rolf had 30 assists for Assumption (32-4), including the assist on Schubert’s 1,000th career kill.

Just a junior, Schubert now has 349 kills this season, tied for the fifth most in Class 3A. With the Knights just beginning the 2021 postseason, there is plenty of time for Schubert to add to her kill total. Assumption will host Northeast (10-28), a four-set winner at Anamosa, for Wednesday’s regional semifinal.

“It’s a big milestone, but I really am just focused on getting our team to state,” Schubert said. “That’s really the big goal right now. This was a great little treat on the way, but the fiesta is at state in the Cell.”

The Knights opened the postseason on Monday as the freshly-minted No. 1 team in Class 3A after leap-frogging West Delaware in the latest rankings.

“I told the girls that doesn’t mean that we’re done yet,” Scherler said. “Let’s finish some unfinished business. We’ve been at state for the last few years, and every single team before has had that goal of winning. I can feel it. I can taste it this year. We’ve got a really great group that we didn’t quite know was going to come together this well. We started to hit our stride mid-season, and we’re really picking that up. I’m hoping that we’re in that state final and I’m hoping that we get our first state championship for volleyball at Assumption. We’re sick of seeing wrestling and basketball (banners). We love them up there, but it’s time we get volleyball up there.”

This past volleyball season, Sherrard returned to prominence as a power in the Three Rivers Conference.

The Western Big 6 All-Conference volleyball teams were announced Wednesday. Rock Island had seven players listed, the most of any team. Moline and Sterling had six.

Prior to the start of the 2021 season, the players and coaches of the Moline volleyball team made a list of goals.

GALESBURG — For the first time since 2013, Rock Island High School volleyball has earned a regional title.

Assumption volleyball players celebrate a point against Camanche in a Class 3A regional quarterfinal Monday at Assumption High School.

Assumption's Carly Rolf (3) and Ava Harris-Shepard (15) go up for the block in front of Camanche freshman Miley Duritza in a Class 3A regional quarterfinal Monday at Assumption High School.