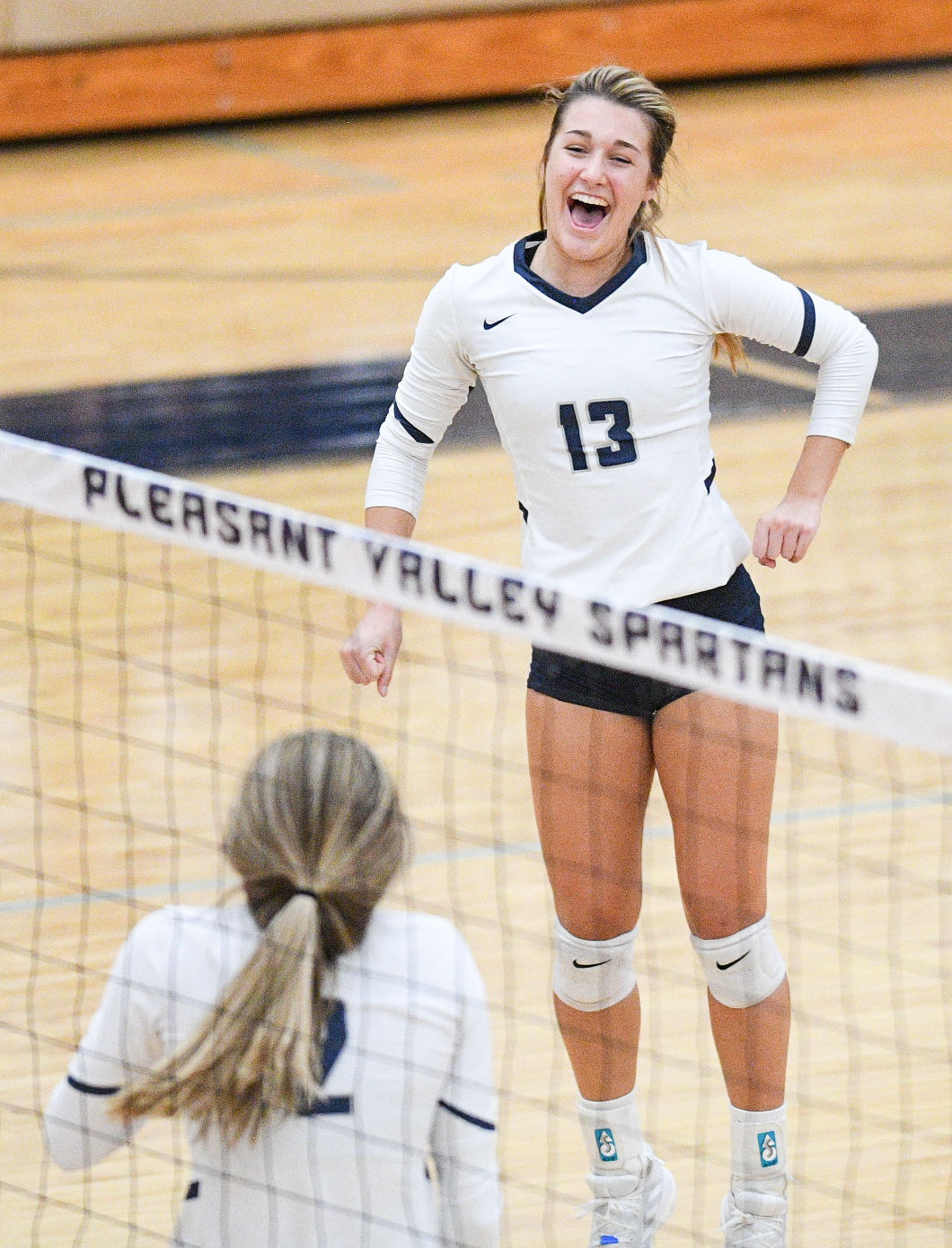 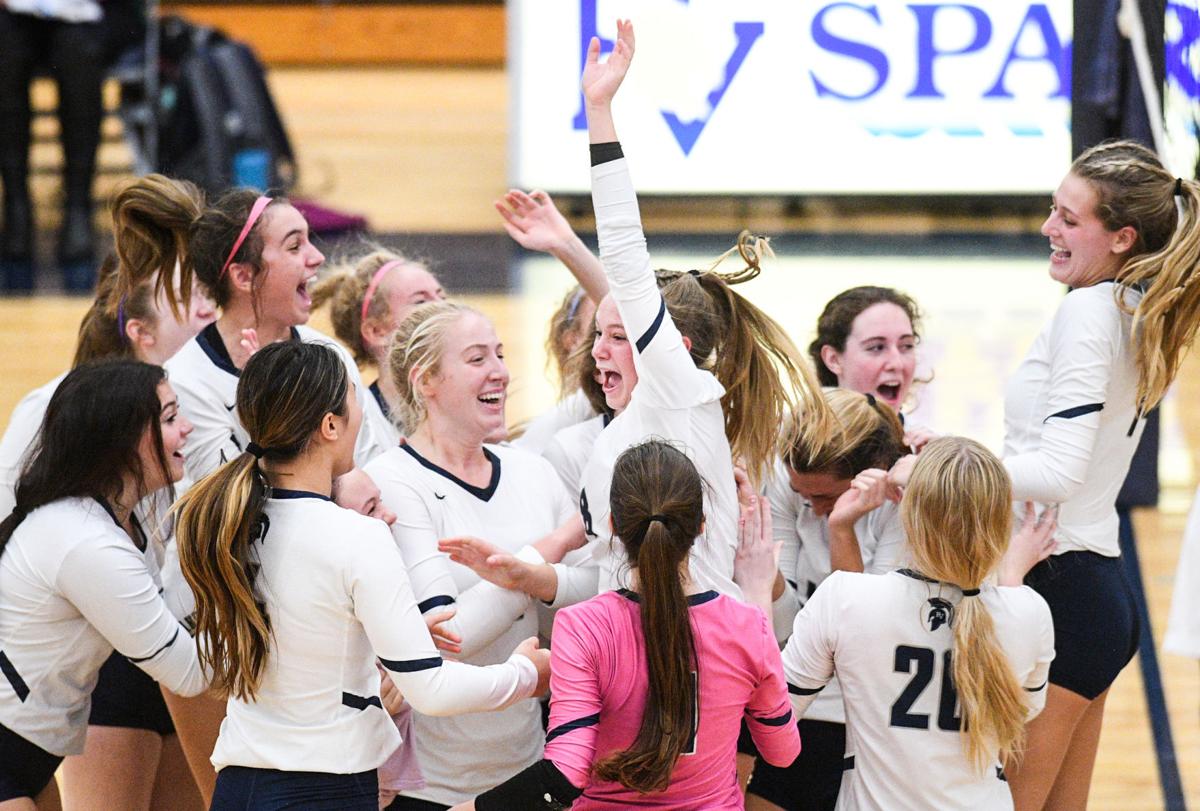 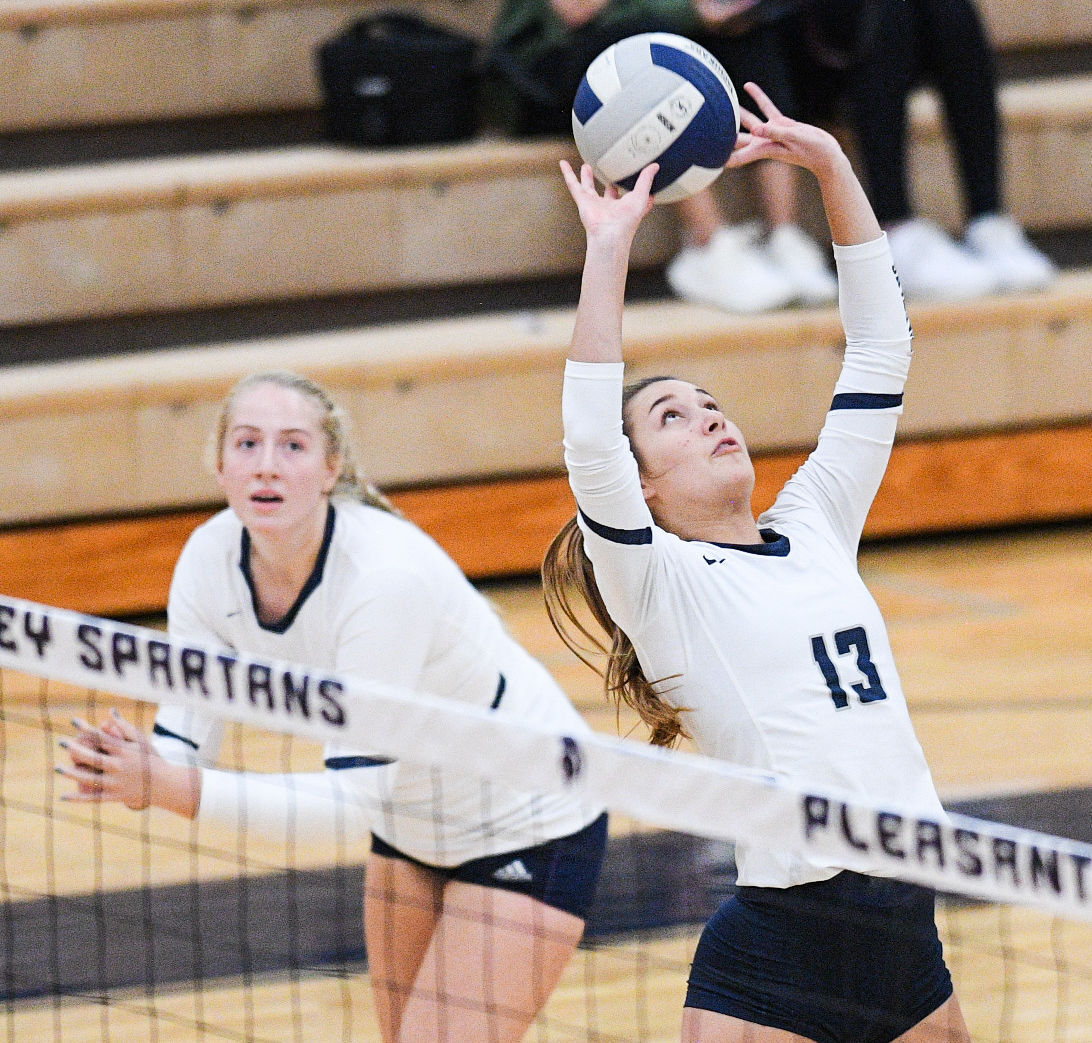 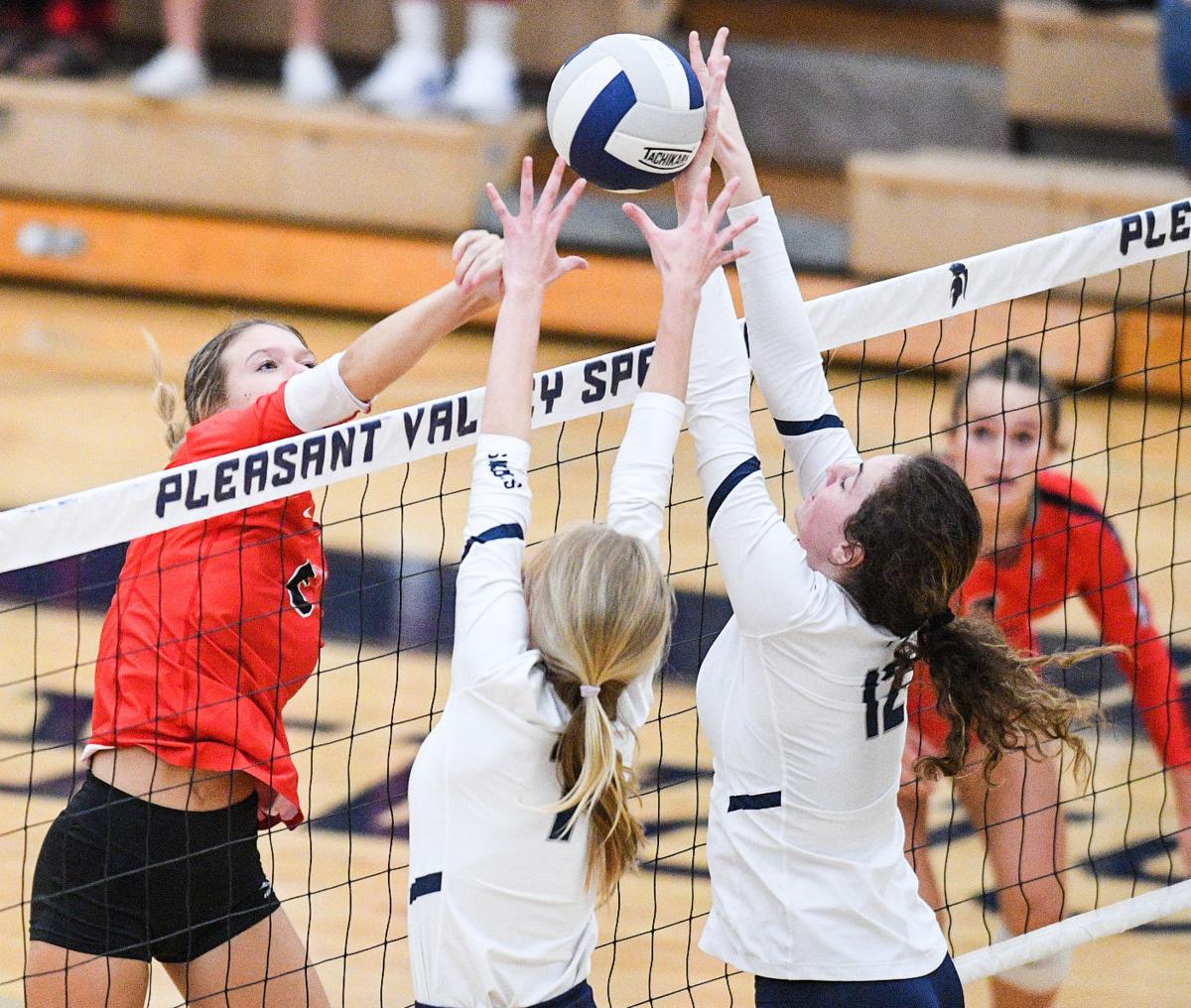 The Spartans’ Arra Cottrell had eight kills in the opening set. The Knights did not have anyone with more than eight kills for the match.

PV’s Chloe Cline had five blocks, equaling what Assumption had as a team.

In what was projected to be a knock-down-drag-out for Mississippi Athletic Conference supremacy turned into a fairly one-sided match.

“That was the cleanest volleyball we’ve put together in all phases,” Spartans coach Amber Hall said.

“It was more surprising on our (side) on what we brought to the table,” said Scherler, whose squad took the Spartans to five sets a year ago. “We couldn’t quite get a few things together. Just very frustrating in the moment.”

PV (27-4, 8-0 MAC) secured at least a share of the MAC title, its fifth straight. The Spartans can win it outright with a victory over Clinton on Thursday at Yourd Gymnasium.

The Assumption match was one PV had circled on its calendar.

“We were looking forward to this match for several weeks,” defensive specialist Molly Albrecht said. “We were very ready to play and excited for this match.”

Cottrell erupted for eight of her match-high 15 kills in the first set as PV used 6-1 and 8-1 scoring sprees to seize control. The Spartans tallied eight of the first 11 points in the second set and never saw the margin dwindle below three.

“Kora (Ruff) moves the ball around really well, which allows me to have a great opportunity to put the ball down,” Cottrell said.

It was a memorable night for Ruff. The University of Evansville recruit finished with 31 assists and eclipsed 3,000 for her career, the first player from the Quad-Cities area to reach that milestone.

A four-year starter, Ruff has registered more than 670 assists in each of her four seasons.

“This was one of my goals since my freshman year,” Ruff said. “One of my teammates my freshman year said, ‘Kora, you can get to 3,000 assists by your senior year.’ I didn’t even think that was possible. Now having done that, it wouldn’t be possible without all my teammates the last four years.

“I’m grateful for all of them and my coaches.”

Like usual, Ruff distributed the ball around to multiple hitters as PV finished with a .279 hitting efficiency. In addition to Cottrell, Halle Vice had 10 kills, Emily Goodpaster and Cline each had six.

“An outstanding person, outstanding player,” Hall said of Ruff. “It is just a reflection of everything that she does. She gets the ball to the hitters at the right spots, her IQ is outstanding and she gives every hitter an equal opportunity to put that ball down. She’s leaving her mark in a great way.”

Assumption (31-4, 8-1) had its best stretch in the third set, but never could snatch the lead. AJ Schubert and Dru Dorsey each had eight kills for the Knights.

PV's defense answered the challenge, either with its block or in the back row.

"Our defense was very aggressive, everybody hit the floor and everybody went for every ball," Albrecht said. "We just really wanted to win and we played with a lot of heart."

Scherler’s team was on its heels most of the match.

“PV has got a good arsenal at all times, and it helps when they put themselves in system and better the ball,” she said. “When you’re always on the defensive, it is really hard to change that mentality, get after it and get some momentum going.”

The Knights begin regional play Monday at home against Camanche.

PV, meanwhile, tries to finish off a perfect run through the MAC for the third straight season. The Spartans have won 28 consecutive league matches.

“This was a solid game, but we definitely have not reached our ceiling,” Cottrell said. “We have so much more that we can accomplish.”

The Spartans have been in the state semifinals each of the past two seasons. Even with some weekend stumbles against three top-ranked teams — Iowa City Liberty (5A), Western Dubuque (4A) and Dike-New Hartford (2A) — PV believes it can take it a step further this season.

"This team is definitely not the same team that lost to Iowa City West in our third match of the year," Ruff said. "We're a whole different team and has progressed so much.

"Even after Western Dubuque, I think that fired us up and motivated us."

With only a handful of matches remaining on the Western Big 6 Conference volleyball schedule, the league championship is already in Moline's p…

SHERRARD — Needing a win Tuesday night to clinch at least a share of the Three Rivers Conference's West Division title, the Sherrard volleybal…

Moline's Ella Ramsay didn't want to play volleyball at first. In fact, she was mad at her mom for even making her try out.

But five years later she earned a college scholarship and is now leading the Maroons to WB6 title.

The Maroons were down 24-22 in the second set, but Ramsay and company brought Moline back for the dramatic win.

Moline volleyball improved to 11-0 in WB6 play after a huge road win at Rock Island. The Maroons were led by Ella Ramsay, who had a team-high seven kills and four aces.