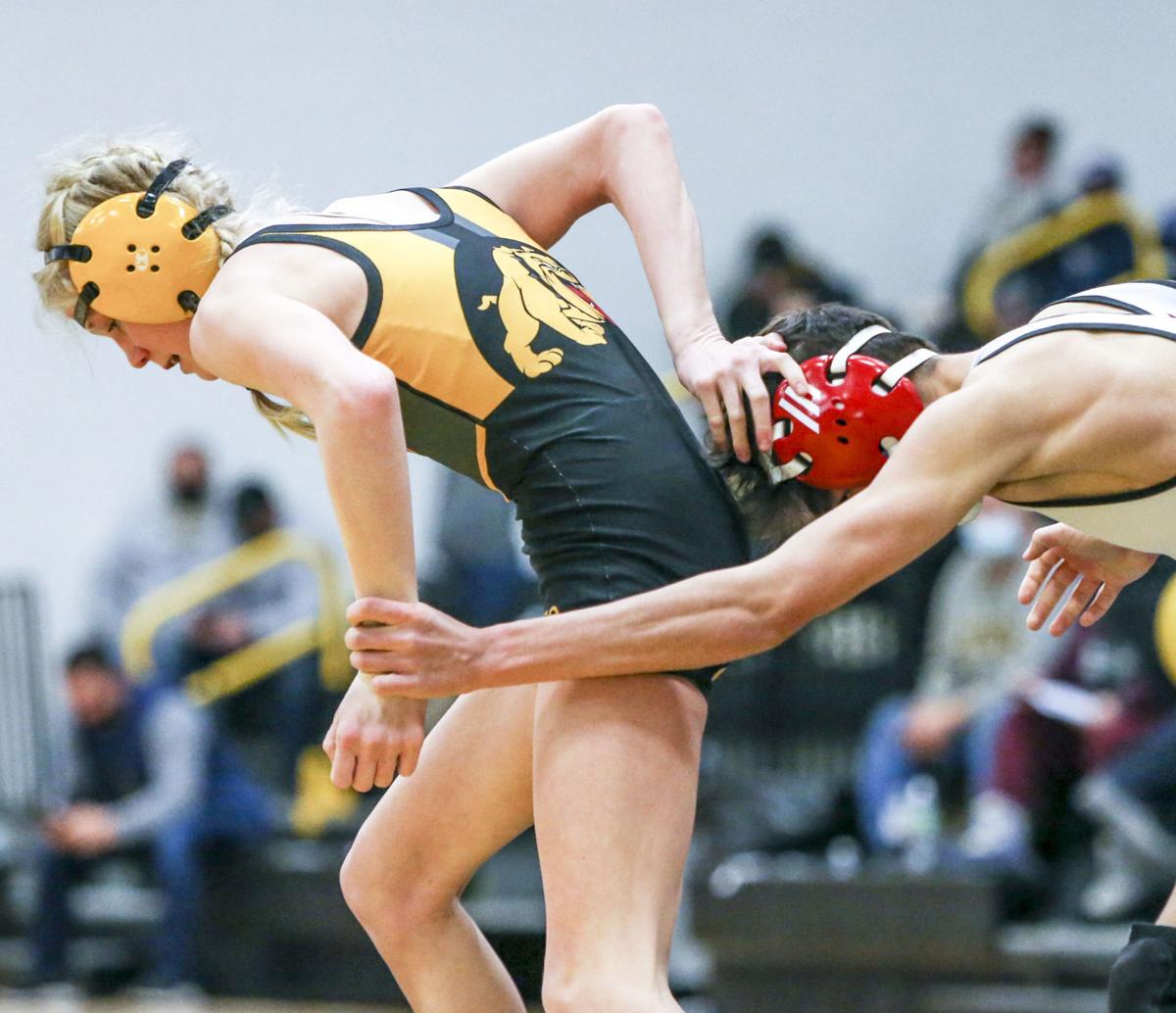 Bettendorf's Ella Schmit tries to slip away from Davenport West's Ayden Nicklaus in the 106-pound final at Saturday's Class 3A district meet. Schmit placed second to advance to next week's state tournament in Des Moines. 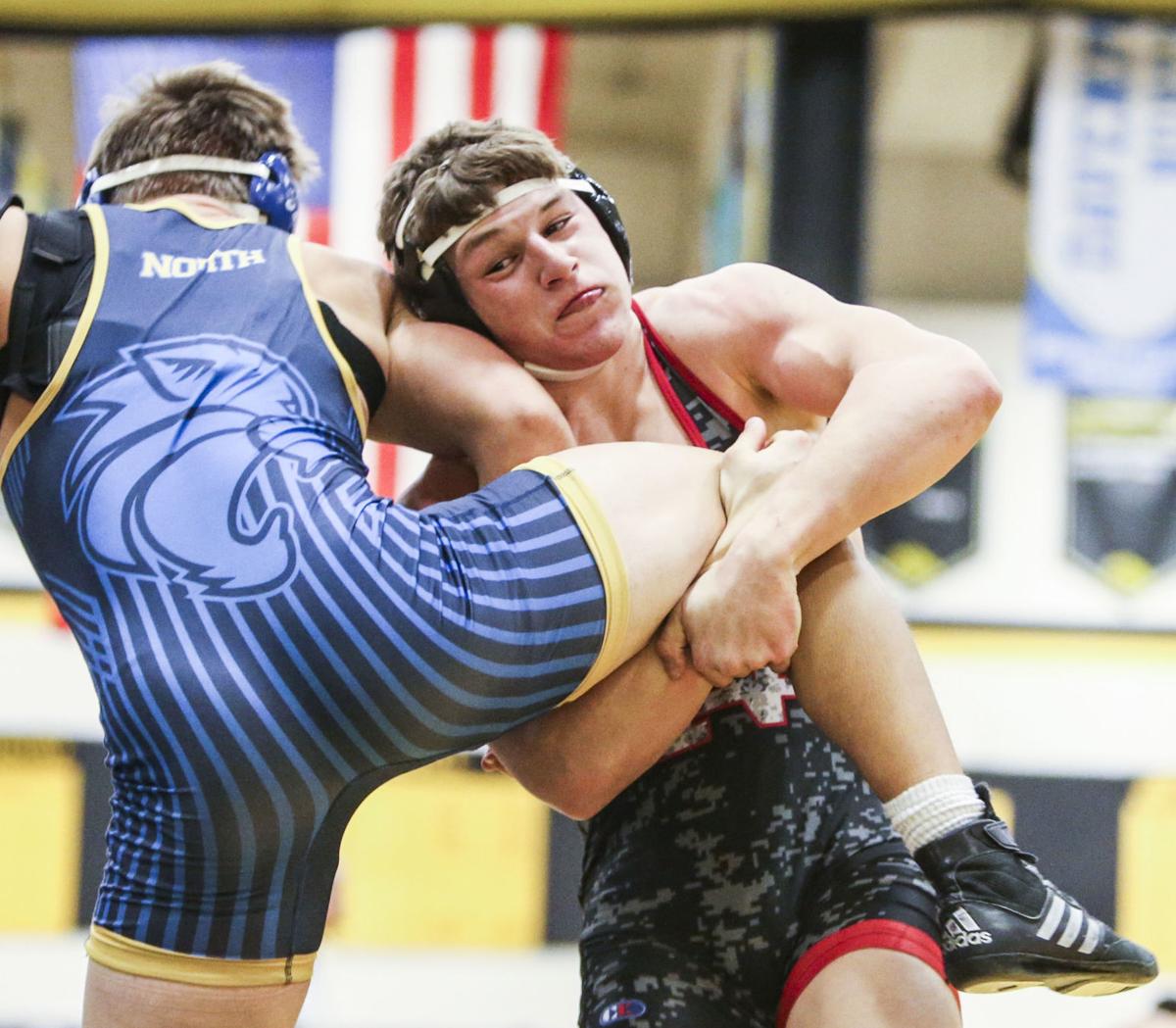 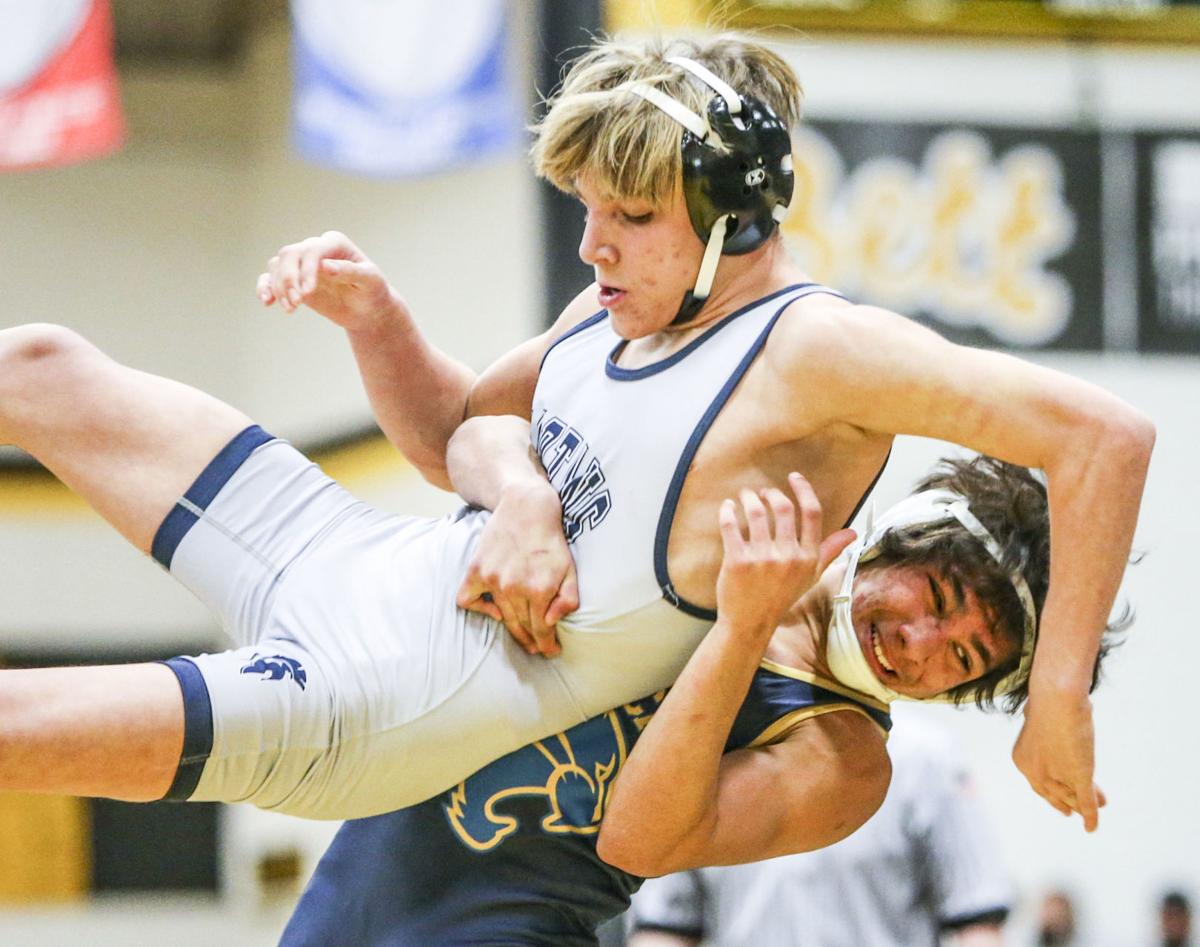 Davenport North's Eleazar Valerio picks up Pleasant Valley's Jack Miller during their 132-pound final at Bettendorf. Valerio pulled out a 3-2 win in the district final. 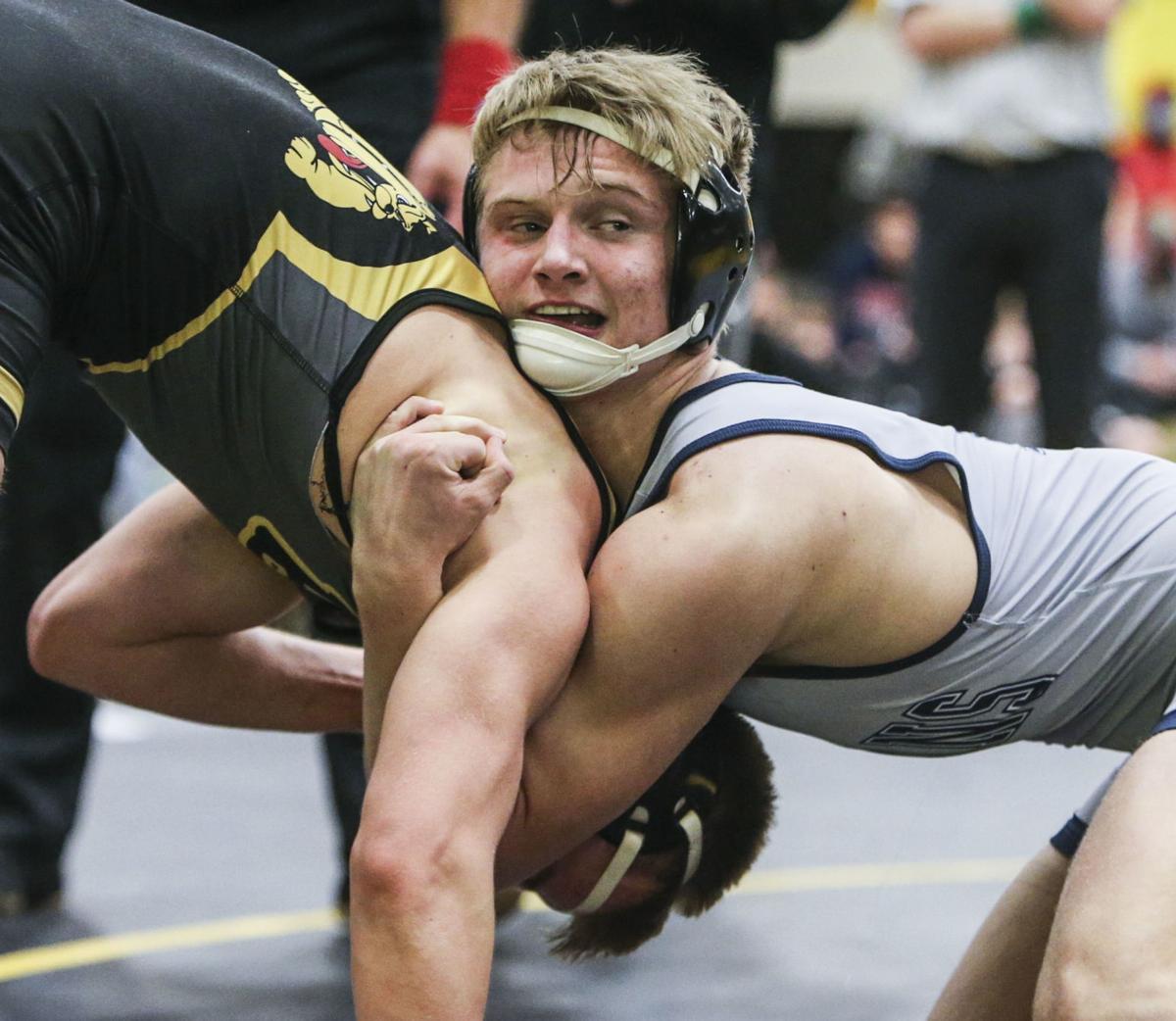 Schmit was waiting to see if she would have to wrestle back for second place.

But after Davenport North's Jeffery West secured a third-place win at 106 pounds over North Scott's Drew Metcalf, Schmit had made history.

Several minutes later, Ottumwa 106-pounder Jasmine Luedtke placed second at her district meet and will join Schmit among the 672 wrestlers at Wells Fargo Arena in Des Moines next Thursday.

"It is a little bit of relief," Schmit said. "It is pretty stressful coming in here knowing you lose one match early and you're done, but this is pretty cool. It is what I've been working toward."

Cedar Falls' Cassy Herkelman and Ottumwa's Megan Black became the first two girls to qualify in 2011. Nobody had done it since then until Saturday.

"Ella continues to be amazing," Bettendorf coach Dan Knight said. "The fight that she has is tremendous, but she's definitely not satisfied.

"It is not a stretch to think she could place (at state). She'll have to wrestle well, but finding a way to get two wins and getting on the podium, it is very doable for her."

In the finals, she lost to Davenport West's Ayden Nicklaus 8-3. Schmit led 3-2 going into the third period before Nicklaus executed a four-point move.

It was a much closer result than her defeat to Nicklaus at the conference tournament two weeks ago.

"I feel I'm definitely in better shape than I was at MAC," Schmit said. "It is pretty cool to be able to hang in there with him for that match.

"A lot of girls can stick with the boys when they're younger, but when they hit puberty, the boys mature and get stronger and the girls get discouraged. It is cool I could stick with it and not stop after I grew up. This is a different level."

Schmit will have plenty of eyes on her in Des Moines. There was a camera following Schmit around for most of Saturday's competition. That will intensify at the state meet.

"I don't let any of that stuff get to me," she said. "I just need to keep my head down and stay humble.

"It can put a lot of pressure on someone and makes you almost feel like you have to win. I don't like that feeling. So I'll keep my eyes away from (social media), focus on the good and keep wrestling."

The Bulldogs qualified a district-best nine for the state meet.

Hill, a state place winner at 170 last year, remained undefeated on the season.

"It is always nice to have an undefeated season and knowing you're wrestling well the whole year," Hill said. "I've just got to close the deal."

The Petersens each pinned their way through the bracket.

"They come out high pace right away and that is hard to deal with," North Scott coach Drew Kelly said. "Guys don't want to wrestle like that for a full match, and they can put you away.

"They're wrestling with a lot of confidence right now."

Both locked up cradles in the championship match.

"We both have such long arms, can get that locked up, have good grip strength and aren't letting anybody out," AJ Petersen said.

"Right now, I feel like I can beat anybody."

North Scott, 0-for-3 in wrestle back matches a year ago at districts, got its final qualifier when 170-pounder Seth Madden squeaked out a 4-3 win over Bettendorf's Austin Barta in the second-place wrestle back.

"Madden, he's been a grinder all year," Kelly said. "There have been a few bumps along the way, but he's continued to work hard. I'm proud of him."

Pleasant Valley qualified five for the state meet, the most since coach Jake Larsen's first season.

"I felt like I protected my legs a lot better and had way better pace than I've had," McDermott said.

McDermott was motivated after coming up short at districts a year ago.

"I was thinking about that a lot (Friday night) and I didn't want the results that happened last year to happen again," he said.

Larsen called it a turning point day for his program.

"I'm really proud of their effort today, one of the better district meets we've had since I've been coaching at Pleasant Valley," he said.

North's Eleazar Valerio won the 132-pound bracket and Cade Sheedy was second at 195. Travis Hodges joined Nicklaus as qualifiers for the Falcons.

Nimely and Togeh Deseh, second at 285, moved on as well for the Muskies. Nimely (33-1) is vying for his second state medal.

"My frame of mind is great right now," he said. "A lot of people aren't expecting me to be one of those guys up there to pull upsets, but I know I can do it.

"I've been there a couple times and I know what to expect."

DES MOINES — Dustin Bohren pulled it out in dramatic fashion. Bradley Hill is one win from a perfect season. Griffin Liddle is on the doorstep…

SOLON, Iowa — For a first-time qualifier like Camanche senior Jaxon Bussa or a wrestler preparing for his fourth appearance in the Iowa high s…

Wearing a brace on his left shoulder, Derrick Bass stepped onto the mat for the first time in nearly a month Saturday at the Class 2A sectiona…

Assumption goes 5-for-5 in opening round at state

DES MOINES — Davenport Assumption might not have the volume of state wrestling qualifiers like it has had in previous seasons, but Jon Terrone…

DES MOINES — Jaxon Bussa had never qualified for the state wrestling tournament until his senior season.

Bettendorf's Ella Schmit tries to slip away from Davenport West's Ayden Nicklaus in the 106-pound final at Saturday's Class 3A district meet. Schmit placed second to advance to next week's state tournament in Des Moines.

Davenport North's Eleazar Valerio picks up Pleasant Valley's Jack Miller during their 132-pound final at Bettendorf. Valerio pulled out a 3-2 win in the district final.