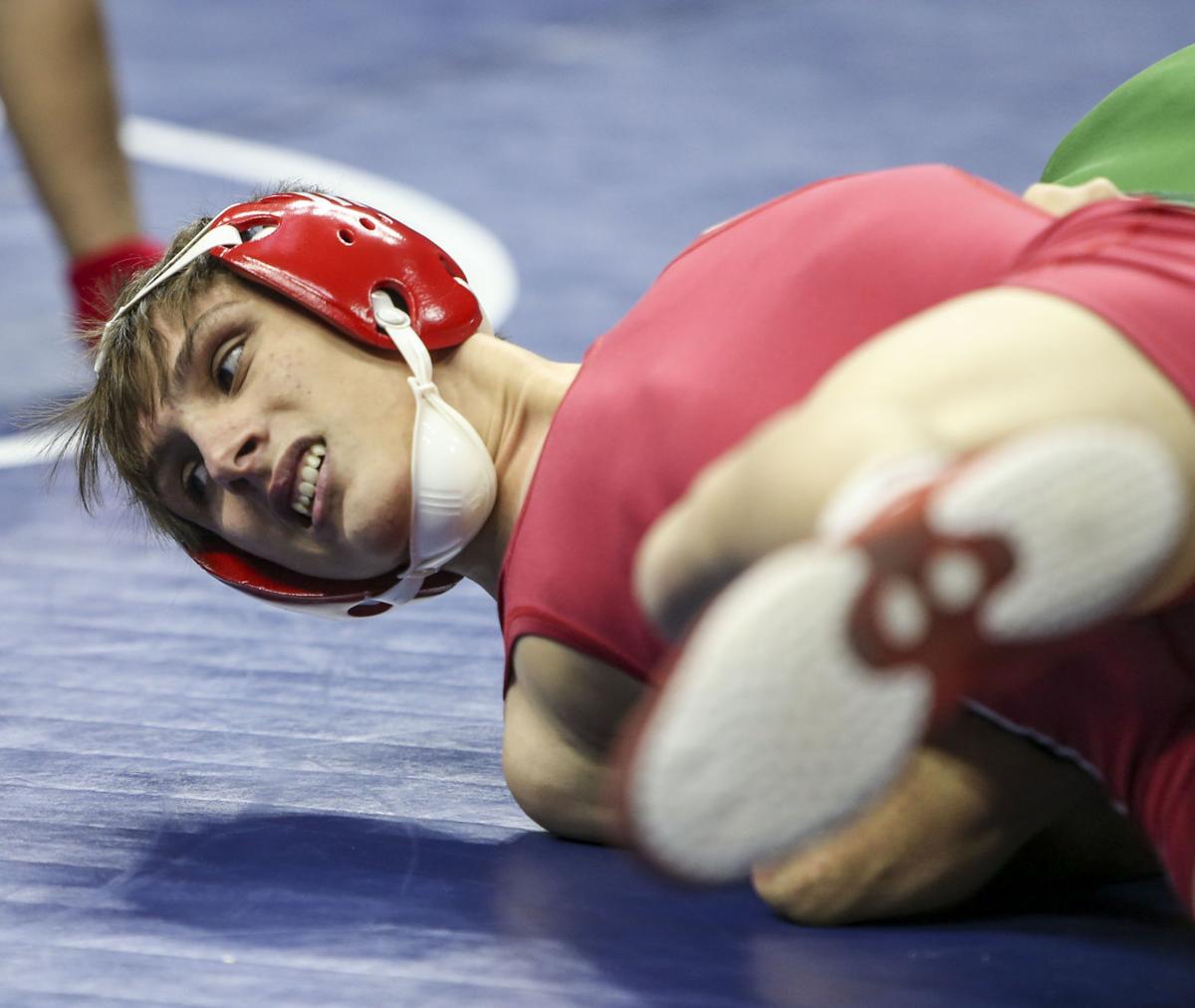 Davenport West's Travis Hodges wrestles Iowa City West's Parker McBride in a 120-pound match Thursday at the state tournament in Des Moines. Hodges overcame an 8-0 deficit with a second-period pin to advance to the quarterfinals. 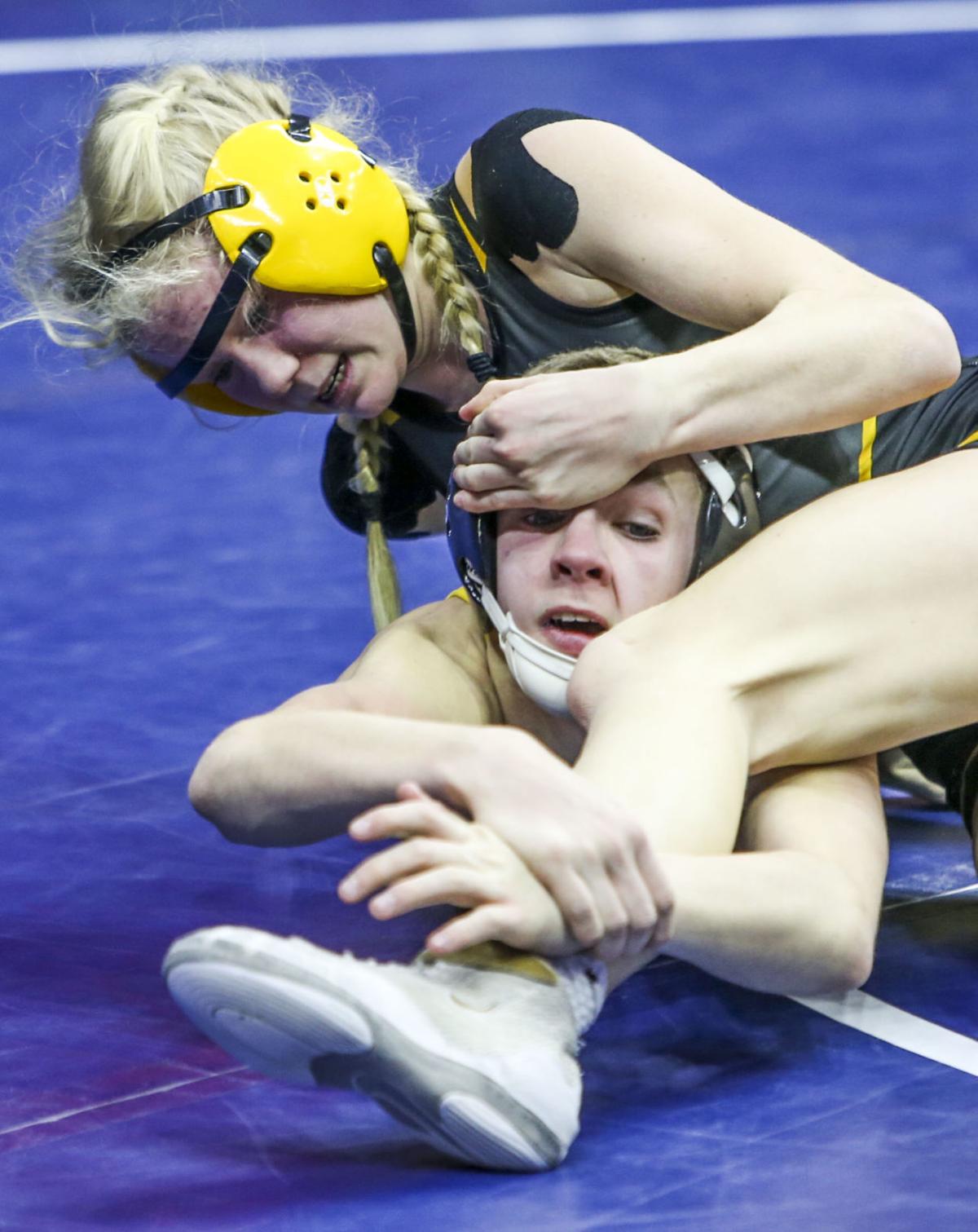 Bettendorf's Ella Schmit wrestles Waverly-Shell Rock Zane Behrends in a 106-pound match at the state tournament Thursday. Schmit lost her opener, but bounced back with a second-period fall in the consolation round. 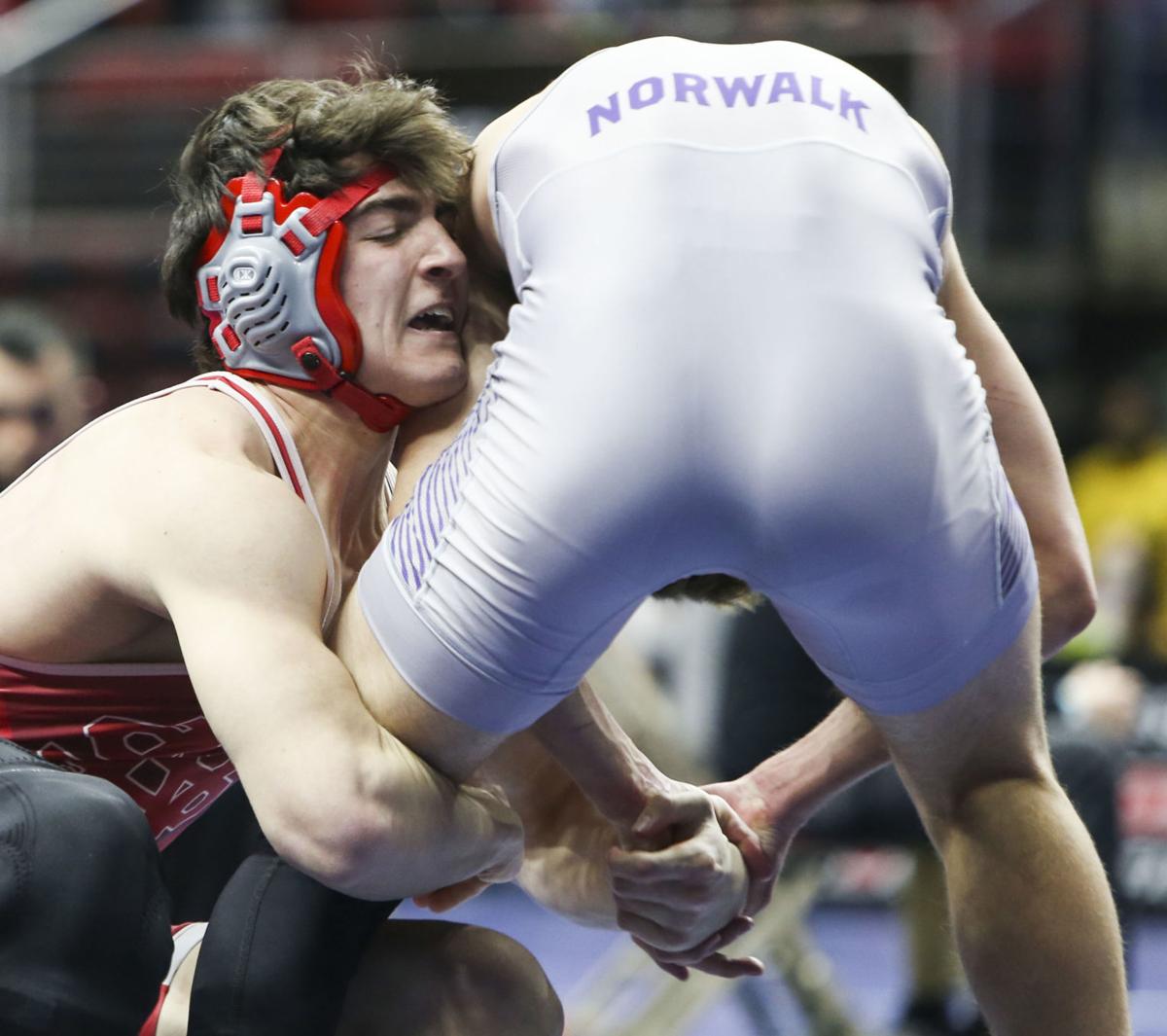 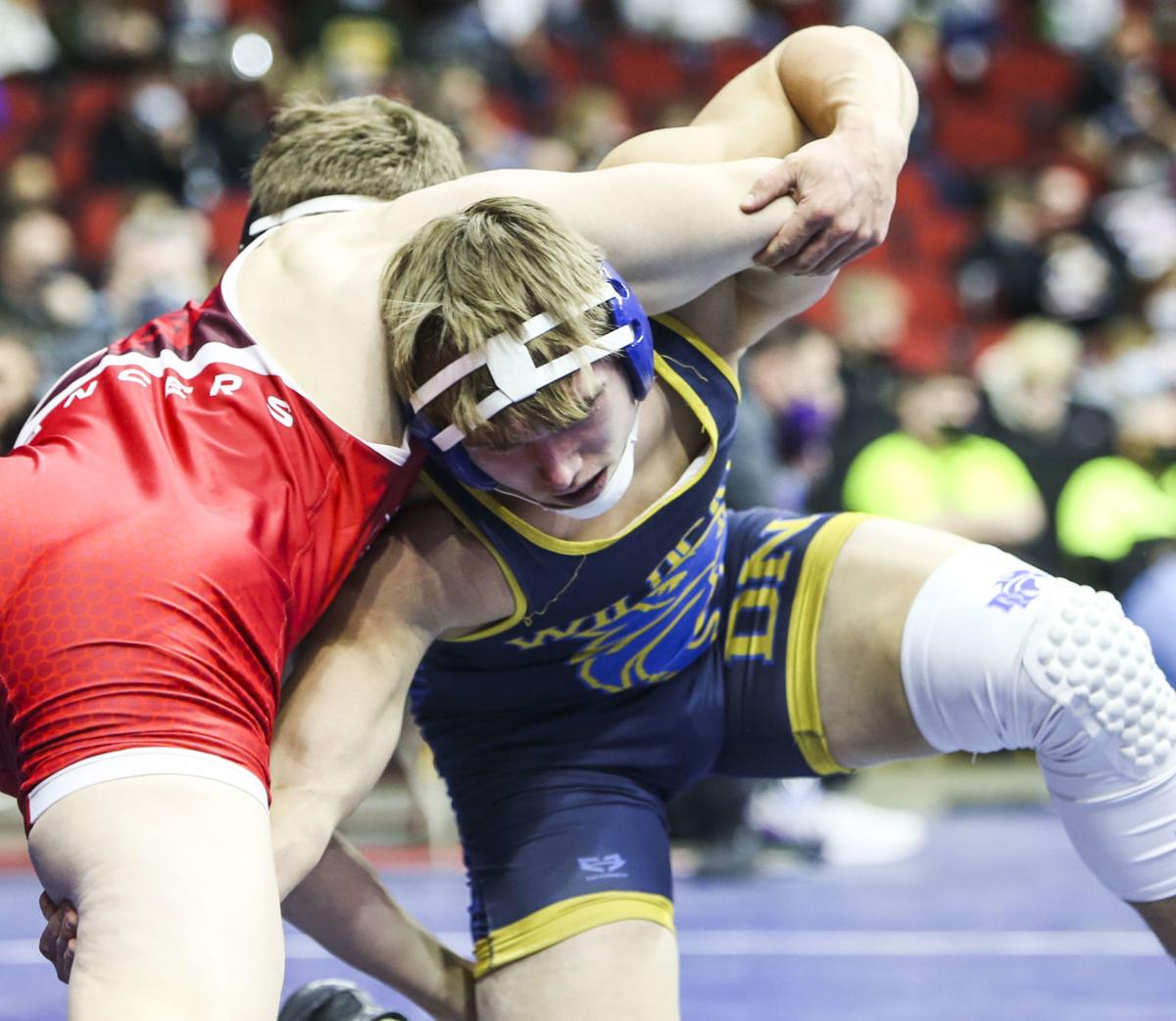 “I was still relaxed,” Hodges admitted, “because I knew I could hit big moves.”

Hodges locked up a neck wrench and put McBride on his back to record a pin in 2 minutes, 42 seconds to earn his first state tournament win at Wells Fargo Arena.

After losing a second-place wrestle back at districts as a freshman, Hodges went 0-2 at state each of the past two seasons. He was on the verge of another first-round setback before a stunning turn of events.

“Every year the past three seasons, I’ve beaten place winners during the season,” Hodges said. “I know I have it in me to place, but I need to get it done.

“In the past, it was more about coming here and having fun. This year, it is more like a business trip.”

In addition to Hodges, the Quad-Cities had 13 other metro wrestlers advance to Friday’s quarterfinals.

Bettendorf and North Scott each had five wrestlers win first-round matches while Muscatine’s Tim Nimely (170) and Togeh Deseh (285) won by pin and Davenport North’s Cade Sheedy avenged two losses this season to North Scott’s Joey Petersen to move on at 195.

“It feels great to beat him on the big stage when it matters,” Sheedy said. “I was pumped.”

The Bulldogs’ Ella Schmit, after losing an 8-1 decision to Waverly-Shell Rock’s Zane Behrends in the 106-pound opener, became the second girl in state tournament history to register a win. Schmit pinned Carroll freshman Cael Nelson a split second before the second period ended in the first round of consolation.

Schmit (16-4) can join Eddyville-Blakesburg-Fremont’s Megan Black (eighth in 2012 in Class 1A) as the only other girl to ever place with a win in Friday morning’s second round of consolation.

“It keeps me more motivated,” Schmit said. “I want to get back to the hotel, get down to weight, wake up tomorrow and be ready to wrestle. I want to get on the podium. That’s what I’m thinking about.”

After a scoreless first period, Schmit recorded a takedown with about 30 seconds left in the second period. She eventually turned Nelson and got the fall.

“It goes by fast,” she said. “I stuck to my stuff, stayed calm and knew I had it. It is always a good feeling because after you lose a match, you’re not feeling the best.

“Being able to bounce back, it shows a lot more.”

Luna, a freshman, pulled out a 3-0 win over Linn-Mar’s Kane Naaktgeboren, a wrestler he saw many times on the AAU circuit.

“I was still a little nervous, but this should get me going for the rest of the tournament.”

The other four Bettendorf quarterfinalists collected bonus-point wins. The Bulldogs accumulated 22½ team points and are in fifth place following the first round. Waukee is the leader with 32½ points.

Strief, wrestling on a torn ACL, trailed 2-1 after the opening period but was able to lock up a cradle in the second period to pin seventh-ranked Caden Schmidt of Norwalk in 3:54.

“I tried at first and failed,” Strief said. “I tried the other side and failed again. When he was coming the other way and stood up, I just locked it. He was starting to break it, but I just got a burst of adrenaline, held on and pinned him.”

Strief made the semifinals a year ago. But with the obstacles he has endured this year, he admitted this victory was near the top of his achievement list.

“It shows even with a big injury, I’m still one of the best wrestlers in the state,” Strief said.

Connor pulled out a 5-0 win over West Des Moines Valley’s Logan Stotts. The next hurdle for Connor is getting over the quarterfinal threshold Friday.

“It is my last year, so I want to do the best I can knowing there isn’t next year,” he said. “I have a little different state of mind this year. I’ve got to do better and I can do better.”

Nimely pinned Indianola’s Sean Cunningham in 3:36 to set up a quarterfinal with Cedar Rapids Xavier’s Ivan Thomas. Nimely’s only loss in 35 matches this year came to Thomas at Maquoketa in early January.

“I wouldn’t say he motivated me, but he showed me that I’m beatable,” Nimely said. “I still need to prove myself. I need to listen to my coaches and do the right thing.

“I’m not going to change anything. He just got lucky last time. I’ve just got to keep wrestling.”

Sheedy lost to Petersen 7-4 at the Mississippi Athletic Conference tournament and was pinned by the Iowa State football recruit last Saturday at districts.

This time, North’s junior pieced together a takedown in the first and another in the third to knock off the tournament’s seventh seed.

“I knew I had to stay out of that cradle and take him a full match,” Sheedy said. “If I could take that thing to a full match, I knew I was going to be able to pull off the win.

Pleasant Valley brought five state qualifiers. All five lost first-round matches, but Caden McDermott (152) and Luke Vonderhaar (220) won in the consolation round to move on to Day 2.

Davenport Assumption has turned to one of its alums to lead its storied wrestling program.

Davenport West's Travis Hodges wrestles Iowa City West's Parker McBride in a 120-pound match Thursday at the state tournament in Des Moines. Hodges overcame an 8-0 deficit with a second-period pin to advance to the quarterfinals.

Bettendorf's Ella Schmit wrestles Waverly-Shell Rock Zane Behrends in a 106-pound match at the state tournament Thursday. Schmit lost her opener, but bounced back with a second-period fall in the consolation round.