Iowa Pacesetter: Bettendorf freshman Koester always on the attack
0 Comments
Share this
1 of 3 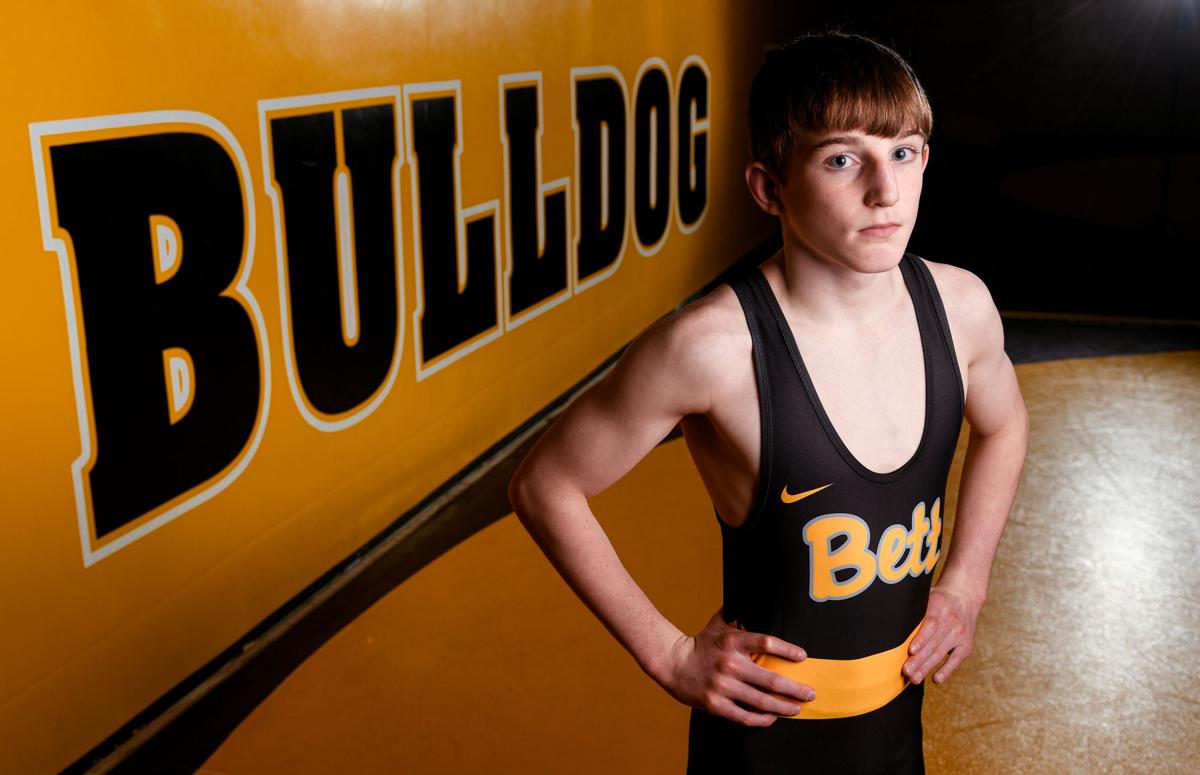 Bettendorf 106-pounder TJ Koester is this week's Iowa Pacesetter. The freshman is off to a 20-1 start this season and was named the most outstanding 106-pounder at the 32-team Clash tournament in La Crosse, Wis., last weekend. He was 6-0 in the tournament with five pins. 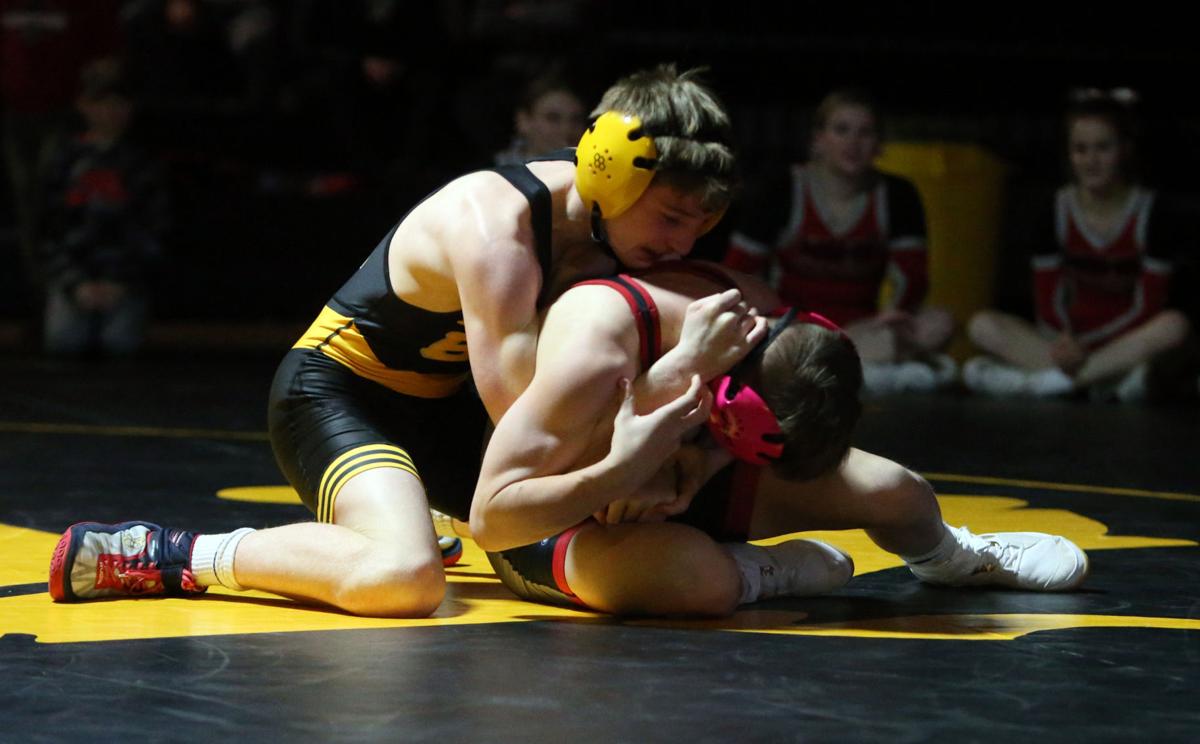 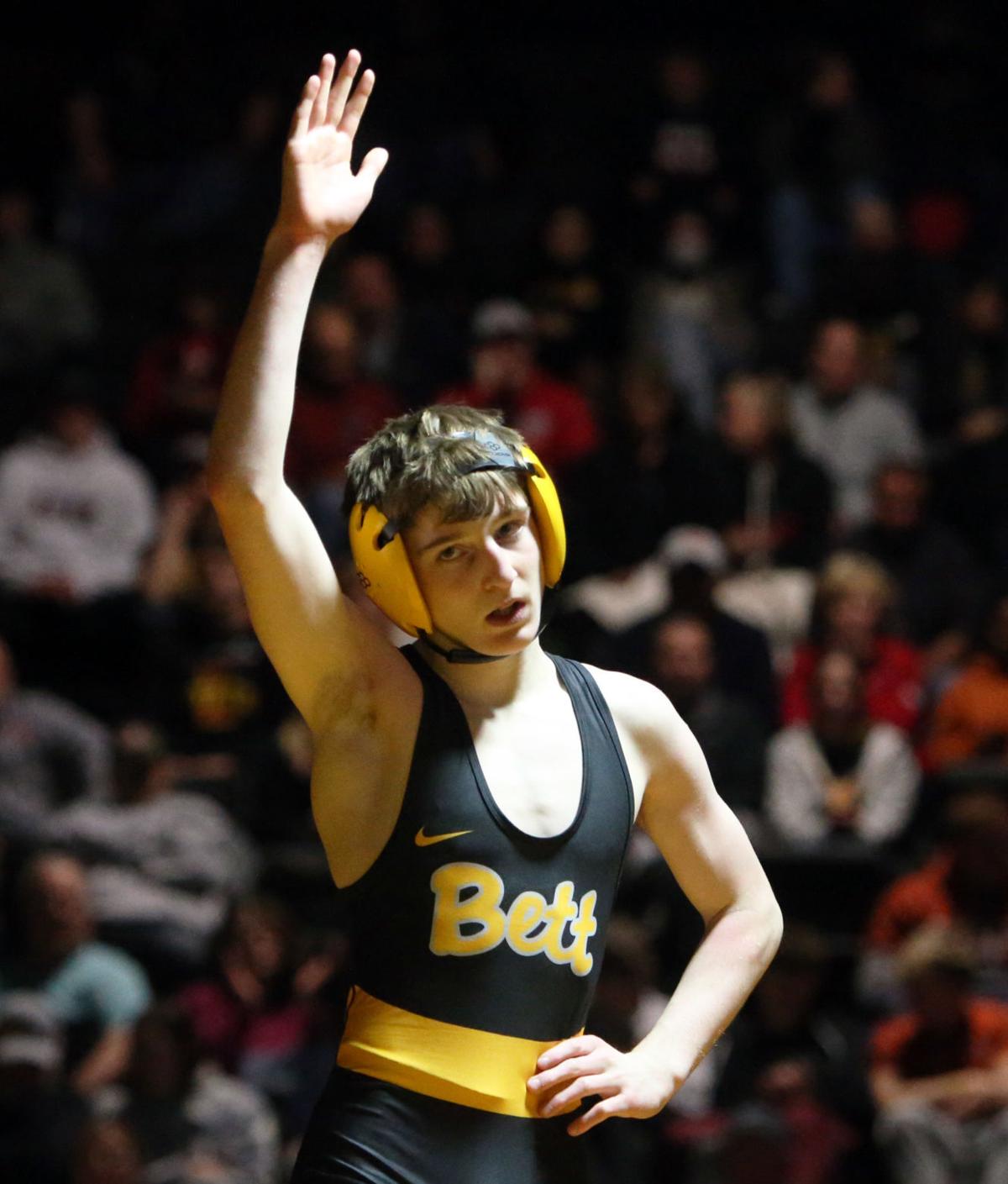 As TJ Koester came up through Bettendorf’s youth wrestling program, there is one word his father continually uttered that has stuck with him.

Labeled quiet and unassuming away from the mat, the Bettendorf High School 106-pound freshman is anything but that once he steps into the circle.

Koester, ranked No. 1 in Class 3A at his weight class by IAWrestle.com, is 20-1 heading into Thursday night’s Mississippi Athletic Conference dual against Davenport Assumption.

Of those 20 victories, 13 have come by pin in the first or second period. He has registered a couple of technical fall victories and a major decision over 2A fourth-ranked Aiden Smith of Atlantic.

“I just like to shoot, get after the guy and not let him rest,” Koester said. “A lot of the kids just can’t keep up because I have a really high intensity.”

Koester, this week's Iowa Pacesetter, was named the most outstanding 106-pounder at The Clash last weekend, a national 32-team dual tournament held in La Crosse, Wis. He was 6-0 with five pins and a 9-5 decision over an opponent from Vacaville, Calif.

His early success is not shocking.

Koester, who has been wrestling since he was 5 or 6, won multiple AAU state championships coming up through the Bettendorf Wrestling Club. How many?

He was a 2021 U14 national freestyle champion and placed fourth in the freshman-sophomore division of the high school preseason national folkstyle competition in early November.

“I don’t think he’s really in awe of anything,” said Bettendorf coach Dan Knight, who has known Koester since he was in first or second grade. “He’s a freshman competing at the high school level, but it helps because he’s competed in big national tournaments for many, many years.

“These kids that come in with so much mat time, you can’t put a price tag on that. He expects to be a state champion this year, and he’s proven himself right now that he’s right in the thick of things.”

It was the only match this season in which Koester didn’t register a takedown.

“I just learned I’ve got to work harder, got to be more technical and clean up my stuff,” Koester said. “Hopefully, I’ll beat him next time.”

Since then, Koester has had only one down-to-the-wire bout. He outlasted second-ranked Carter Pearson of Southeast Polk in the teams’ dual meet on Dec. 18, 3-2.

Koester struck for an early takedown and then staved off a late push from Pearson in the final seconds.

“TJ is very good at certain positions,” Knight said. “He does a very good job of getting to where he’s good, and it is really hard to get him out of his game plan.

“He’s going to find a way to get to his tie, which makes him comfortable and that opens up his attack. He doesn’t get taken out of his game technically very much.”

“He has a really high attack rate,” Knight said. “He’s on kids from the start. That’s something we’ve stressed to our kids. If you take enough shots, you’re going to score.”

Koester has become just as dangerous on top as he is on his feet.

Coming back from winter break, Koester has had four pins in under a minute and two others in the second period.

“One area he’s improved on over the years is the top position,” Knight said. “He can turn good people on top, he can ride people and he can get away. There isn’t one area where you say he’s young and really needs to develop."

That's because he's only a freshman in age, not mat experience.

Koester has gone all across the country competing in tournaments. He’s also gone to multiple wrestling clubs to get instruction.

“It is a credit to dad because he’s taken his boys a lot of places,” Knight said. “They take wrestling very seriously and it is a huge part of their life.”

Still, Koester is not fixated on results. He admits he doesn’t think that much about winning state championships. It is all about the next match, next tournament and making continual improvement.

“I just go there and wrestle, have fun with the team and whatever happens, happens,” he said. “My dad has always said you can’t change the outcome of the match. There is no point in crying over it.”

So far, there has been little reason to be upset.

As his confidence has grown on the mat, Knight has seen the 14-year-old become more extroverted.

“He’s a very quiet kid, goes about his business, doesn’t say a whole lot and works hard,” Knight said, “but this year I’ve seen him come out of his shell a little bit. He’s talked more this year than I’ve ever heard him talk.

How do you get yourself ready for a match?: "I usually just pace."

Most memorable match: A double-overtime semifinal match against (Southeast Polk's) Carter Pearson at state AAU in sixth grade. "I rode him out in double overtime to win."

Bettendorf High School’s wrestling team was humbled last week in its gymnasium. The Bulldogs were the ones dishing out the pain Thursday night…

A recap of Saturday's wrestling action in the Quad Cities:

Wrestling on the home mats for the final time, Rock Island senior Rebecca Ferguson won her first varsity match against a boy to open her team’…

Stohl powers Geneseo wrestlers to title at own invitational

Geneseo's Tim Stohl couldn’t stop smiling. Even when the pressure was on, Stohl kept smiling.

Alleman's Charles Jagusah is this week's Illinois Pacesetter. The dual-sport junior athlete is 23-0 with impressive victories over some of the state's best earning him the No. 1 spot in the latest IWCOA rankings.

Moline wrestling earned seven pins and won by forfeit four times in its 69-9 dominant victory against Alleman on Wednesday at Wharton Field House.

Geneseo's Levi Neumann pinned Eli Gustafson in the heavyweight bout to give the Maple Leafs the 42-34 victory over Rock Island on Thursday night.

Bettendorf 106-pounder TJ Koester is this week's Iowa Pacesetter. The freshman is off to a 20-1 start this season and was named the most outstanding 106-pounder at the 32-team Clash tournament in La Crosse, Wis., last weekend. He was 6-0 in the tournament with five pins.