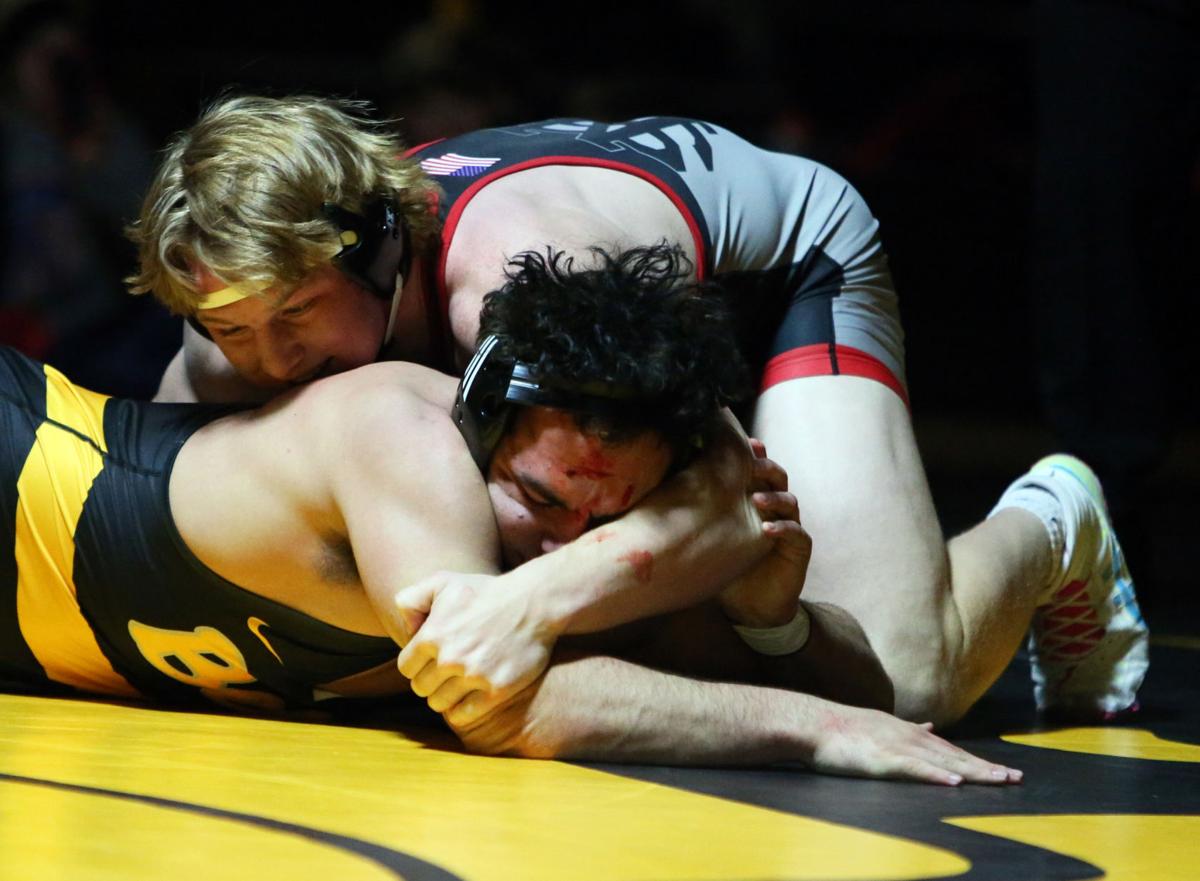 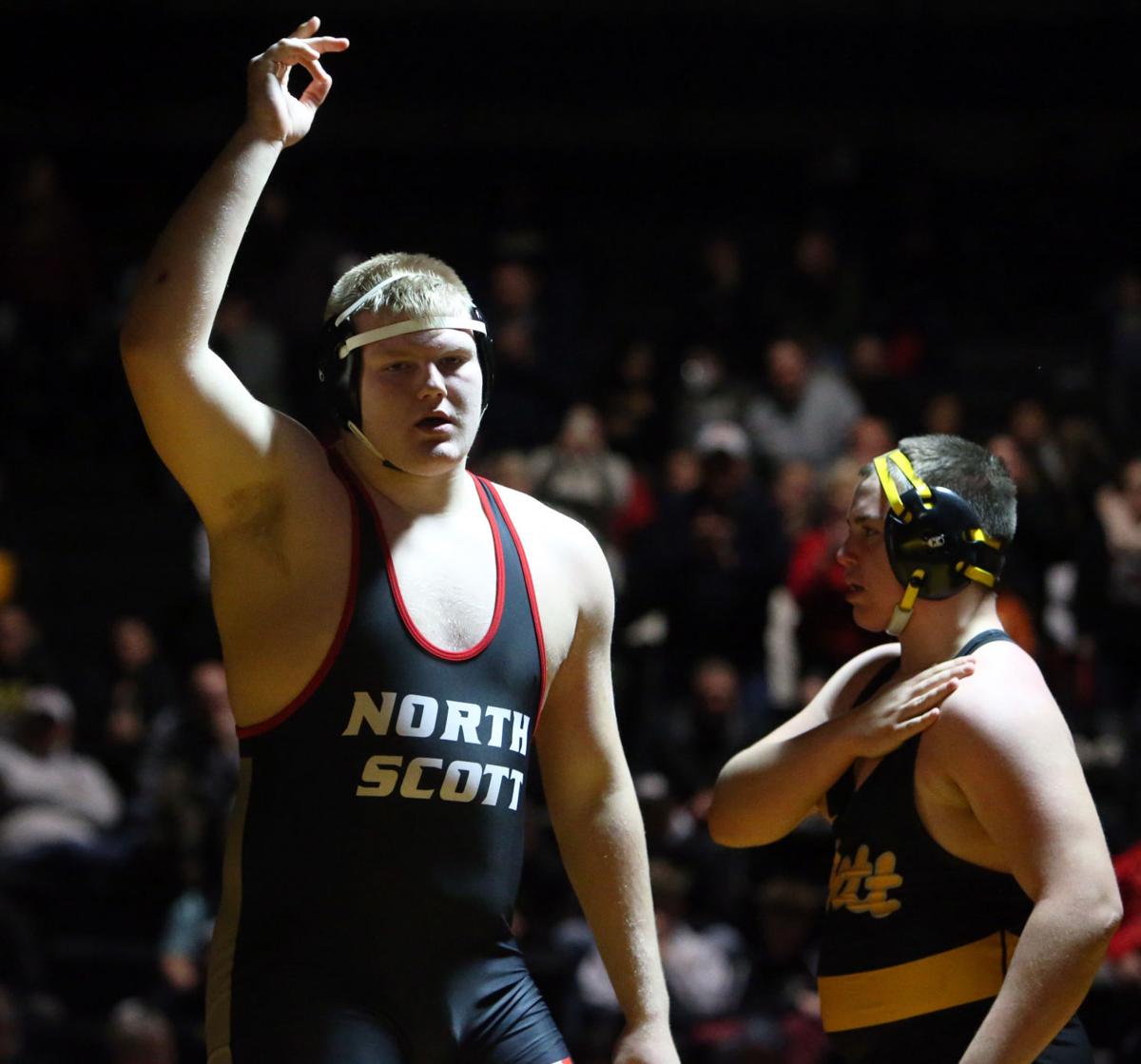 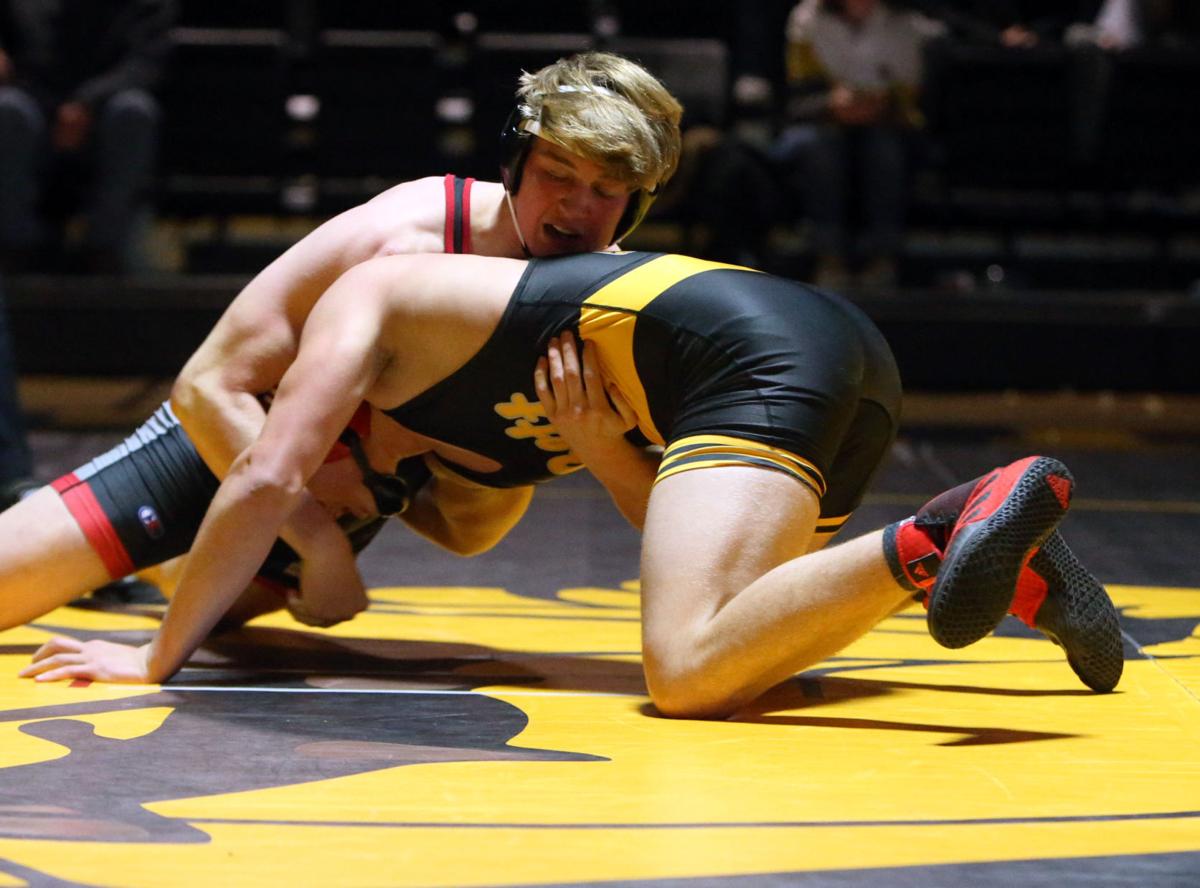 After losing to Bradley Hill in the season-opening tournament, AJ Petersen wanted another crack at Bettendorf’s defending state champion.

His coaches had other ideas Thursday night.

North Scott bumped Petersen up a weight class to 220 pounds and the junior came through with a pivotal pin as the Lancers defeated Bettendorf 40-31 in a highly competitive Mississippi Athletic Conference dual at Bettendorf High School.

“I wanted to wrestle Bradley because I knew it would be a good match,” Petersen admitted, “but this is what was best for the team and that’s what coach (Drew) Kelly wanted.”

The eighth-ranked Lancers collected four pins, one forfeit victory and a major decision to best the fourth-ranked Bulldogs.

Wrestling was the big winner.

There were more than a dozen youth matches contested beforehand between the two schools. Then, there was the first ever MAC girls dual (13 bouts) and more than 20 junior varsity matches.

“A pretty cool night for wrestling,” Kelly said. “Our two programs are all in and it was really fun to see that and have an event like tonight.”

North Scott went into the holiday break with a sour taste in its mouth after a disappointing Day 1 performance at the Battle of Waterloo. Kelly’s team used the two-week break to work out some kinks and begin its second-half push.

“Coaches always preach going into break, that’s the time where we get better and it shows,” senior Ryan Campbell said. “It is always nice coming out beating Bettendorf at its place. Hopefully, we can build on this.”

There were two matches that swung the dual in North Scott’s favor.

Bettendorf’s Ethan Forker and Dylan Marti battled to a 2-all draw after regulation at 160 pounds. Marti was awarded a takedown on the edge of the mat late in sudden death to prevail 4-2.

“I don’t agree with the call at the end,” Bulldogs coach Dan Knight said. “I’m not saying we would have won that match, but I didn’t think there was any control.

“We also tell our kids, they’ve got to wrestle in a way where we take the ref out of the picture.”

Campbell came up big in another toss-up bout at 182.

Locked in a 3-3 match late in the second period with Bettendorf’s Cooper Agosta, Campbell caught his opponent and recorded the fall in 3 minutes, 57 seconds.

“We knew coming in Bettendorf’s lightweights are among the best in the state,” Campbell said. “We knew if we trusted our training and trusted what we know, and battled for six minutes, good things would happen.

“I knew coming in my match was going to be huge. I had to contribute in any way possible.”

Midway through the dual, Petersen was informed he'd be sliding up a weight.

"When we looked at the matchups, if we got the flip and how the dual was going, it was a possibility," Kelly said. "It was important for the dual, and that's what we needed as a team."

Petersen used a pair to takedowns and two sets of back points to build a comfortable lead and then finished off the pin of Diego Cortes in 4:45.

"That's a huge swing," Knight said. "It was good for Diego to get that match. Overall, the difference is we gave up too many pins. We were in some tight matches that we ended up giving up six."

“This was a good comeback for us (after Battle of Waterloo),” Petersen said. “We had a break and we came back swinging and swinging hard. It shows what you can really do with motivation and willpower.”

“(North Scott) wrestles hard,” Knight said. “We’ve been stressing to our kids, we’ve got to be tougher on each other in the room.

“We have some improving to do, but it won’t be the last time we see these guys. It is a nice rivalry and the crowd was awesome.”

Bettendorf High School’s wrestling team was humbled last week in its gymnasium. The Bulldogs were the ones dishing out the pain Thursday night…

A recap of Saturday's wrestling action in the Quad Cities:

Wrestling on the home mats for the final time, Rock Island senior Rebecca Ferguson won her first varsity match against a boy to open her team’…

Stohl powers Geneseo wrestlers to title at own invitational

Geneseo's Tim Stohl couldn’t stop smiling. Even when the pressure was on, Stohl kept smiling.

This week's Iowa Pacesetter is Bettendorf freshman TJ Koester. The 106-pound wrestler is 20-1 this season, including six wins last weekend at The Clash, a national 32-team tournament in La Crosse, Wis.

Alleman's Charles Jagusah is this week's Illinois Pacesetter. The dual-sport junior athlete is 23-0 with impressive victories over some of the state's best earning him the No. 1 spot in the latest IWCOA rankings.

Moline wrestling earned seven pins and won by forfeit four times in its 69-9 dominant victory against Alleman on Wednesday at Wharton Field House.

Geneseo's Levi Neumann pinned Eli Gustafson in the heavyweight bout to give the Maple Leafs the 42-34 victory over Rock Island on Thursday night.