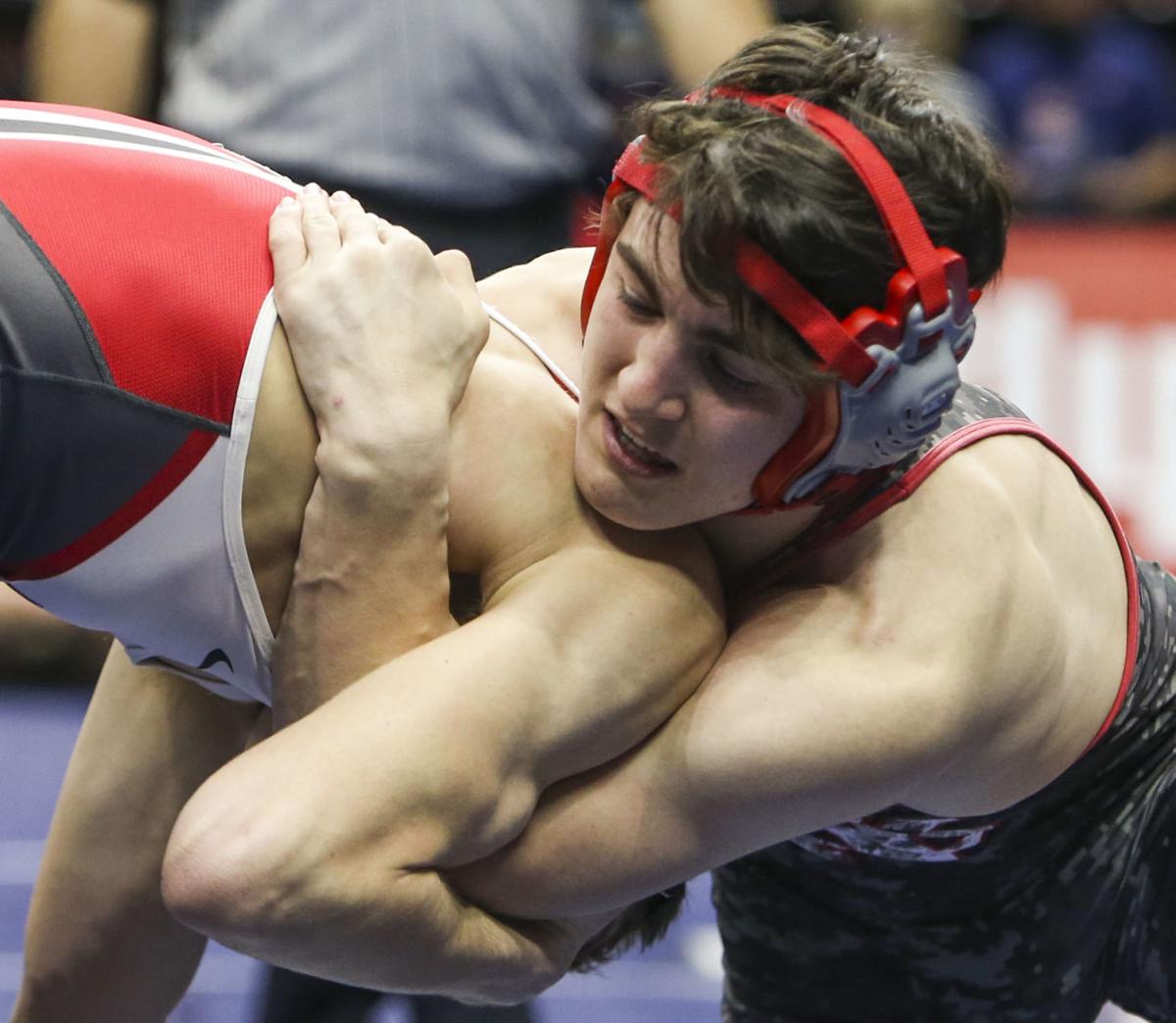 North Scott's Deven Strief beat Bettendorf's Logan Adamson 13-8 on Saturday in a Class 3A consolation final at 160 pounds. Wrestling on a torn ACL, Strief placed third, the best finish of his career. 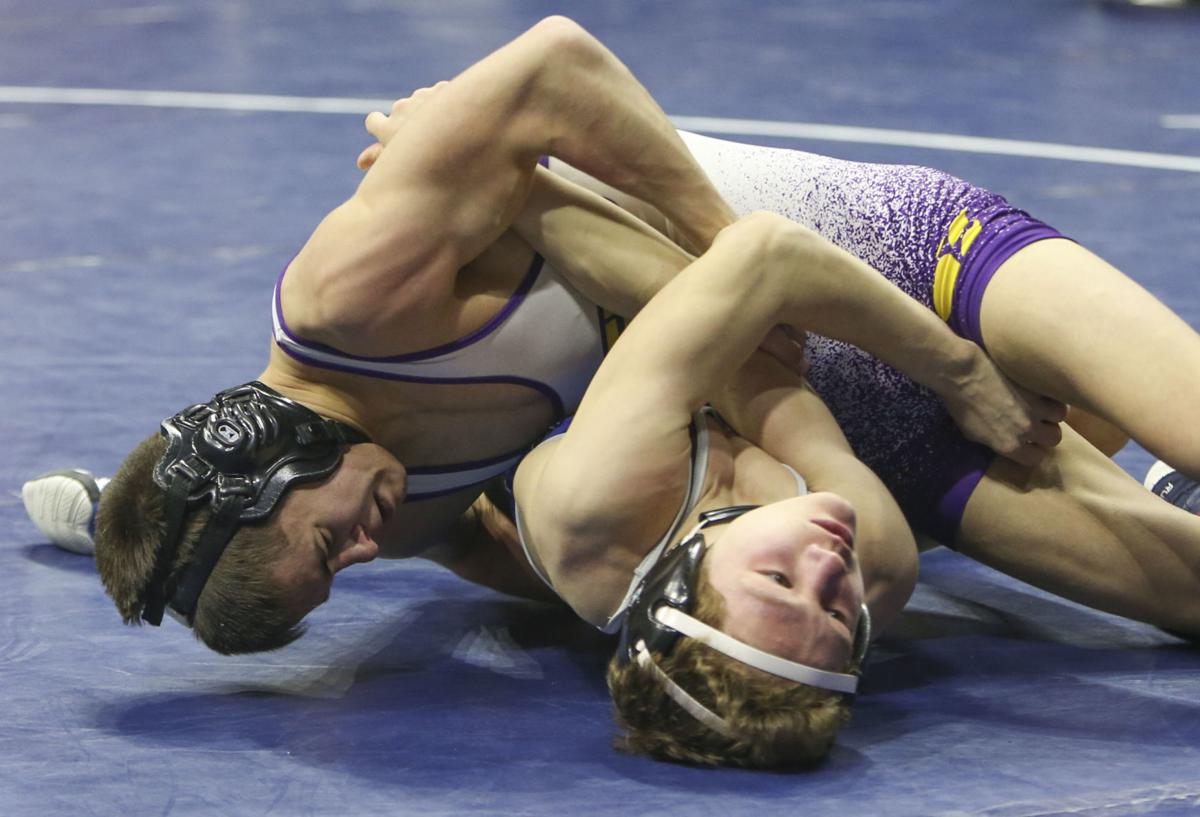 Wrestling with a torn anterior cruciate ligament in his right knee, the North Scott senior pieced together 12 points in the final period Saturday afternoon to beat Bettendorf’s Logan Adamson 13-8 in a Class 3A consolation final at 160 pounds at Wells Fargo Arena.

With just two matches under his belt since the knee injury occurred in January at Solon, Strief came into the state tournament and won four of five matches, including two pins and a major decision, to earn a third-place medal — the best career finish for the three-time state medalist.

“It is one of the more impressive things I’ve ever seen coaching,” Kelly said. “What he’s done since the injury is unbelievable, unreal.

“He’s just tough as nails, no quit and the ultimate competitor.”

Strief trailed Adamson 4-1 after two periods, but two five-point moves in the final period propelled him to a win.

“I was just letting things fly,” Strief said. “I knew it was my last match ever so I was like, ‘Let’s see what happens.’ I did stuff I’ve never really done before. I’ve never really thrown someone or tried to reach back and pull the head like I did.”

Strief admitted he had some doubts about his capabilities this week with little mat time since the injury.

“Just being able to finish top three is amazing,” he said. “I didn’t think I ever could have done that.”

Strief was one of a school-record six medalists for the Lancers, who finished in ninth place in 3A with 72 points.

North Scott has five of its eight qualifiers returning next winter, including Westlin, Gephart and AJ Petersen.

"I’m just proud of how they competed,” Kelly said. “I thought we battled well. We had some tough matches in the semifinal round, but our guys responded well today.

“Hopefully, the trend can continue. We’re moving in the right direction.”

Central DeWitt’s Keaton Zeimet punctuated a 162-win career with two victories in the Class 2A consolations to finish third place at 120 pounds.

Zeimet (39-3) had a pin in the consolation semifinals and followed with an 11-5 triumph over Benton Community’s Jaiden Moore.

“That was four years of emotion, energy and investment that came out there,” Zeimet said.

Zeimet has his imprint all over the Saber record books. He’s the only four-time state medalist (three third-place finishes and a fifth), has 30 more career wins than any other Central DeWitt wrestler and finished with more than 100 pins.

Zeimet said Saturday was his last competitive match. He doesn’t intend to wrestle in college.

“I love the sport, but there just comes a time where I want to focus more on education,” Zeimet said. “I still want to be heavily involved through coaching and helping youth athletics.”

Camanche’s Eric Kinkaid (145) and Davenport Assumption’s Allen Catour (160) each took third place in 2A. Kinkaid pulled out 7-1 and 4-2 wins Saturday for his third state medal but the best finish of his career.

Catour, a state place winner in Illinois last winter for Orion, yielded just one point in two victories Saturday to finish as the Knights’ highest placer. Teammate Michael Macias was seventh at 138.

“After losing in the semifinals, I started feeling bad for myself,” Catour said. “It is not fun losing and having that dream of being in the state finals and fighting for a state championship end.

"My coach (Jon Terronez), though, said there is a time and a place to be sad. In the end, you’ve got see the big picture, there is still work to be done and the next best thing is third. I’m proud of myself for being able to do that.”

Muscatine’s Tim Nimely (170) and Togeh Deseh (285) placed fourth and fifth, respectively. Wilton’s Brody Brisker was fourth at 106 pounds in 1A and Camanche’s Jaxon Busa was fifth at 106 in 2A.

Bettendorf's Jayce Luna edged Davenport West's Travis Hodges for seventh place at 120 pounds in 3A with a 6-4 win in overtime. Davenport North's Cade Sheedy (195) was eighth in 3A.

DES MOINES — Dustin Bohren pulled it out in dramatic fashion. Bradley Hill is one win from a perfect season. Griffin Liddle is on the doorstep…

SOLON, Iowa — For a first-time qualifier like Camanche senior Jaxon Bussa or a wrestler preparing for his fourth appearance in the Iowa high s…

DES MOINES — Jaxon Bussa had never qualified for the state wrestling tournament until his senior season.

Wearing a brace on his left shoulder, Derrick Bass stepped onto the mat for the first time in nearly a month Saturday at the Class 2A sectiona…

Assumption goes 5-for-5 in opening round at state

DES MOINES — Davenport Assumption might not have the volume of state wrestling qualifiers like it has had in previous seasons, but Jon Terrone…

North Scott's Deven Strief beat Bettendorf's Logan Adamson 13-8 on Saturday in a Class 3A consolation final at 160 pounds. Wrestling on a torn ACL, Strief placed third, the best finish of his career.