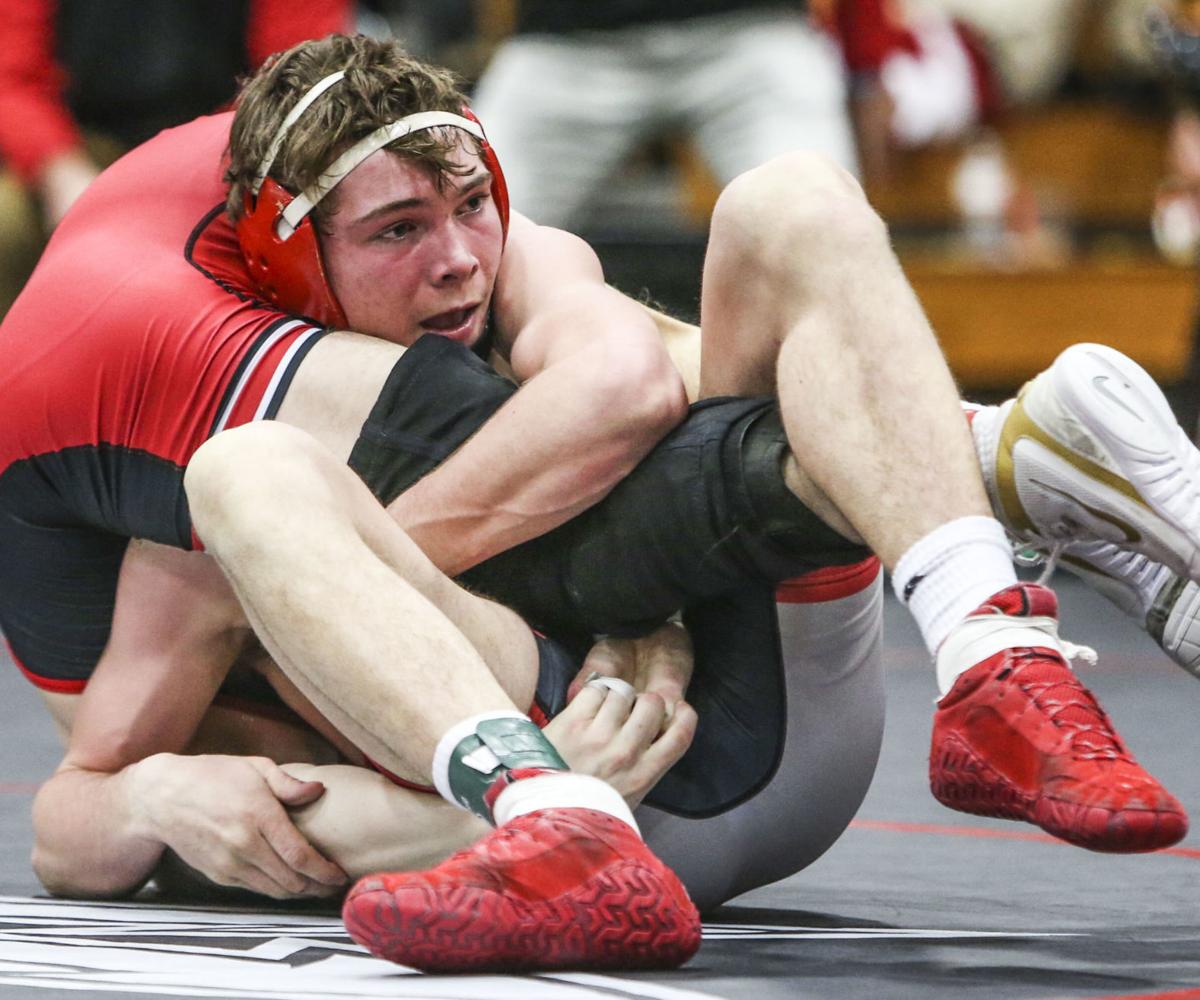 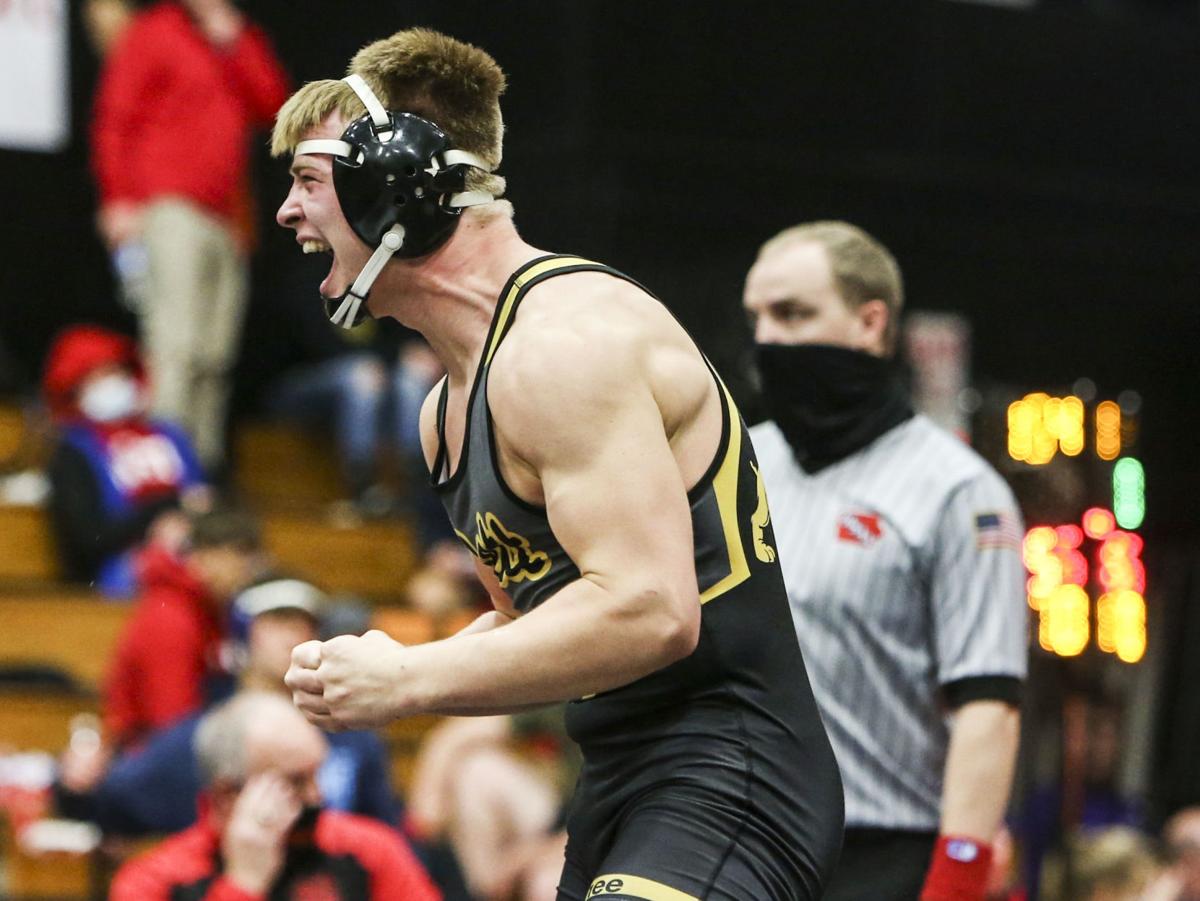 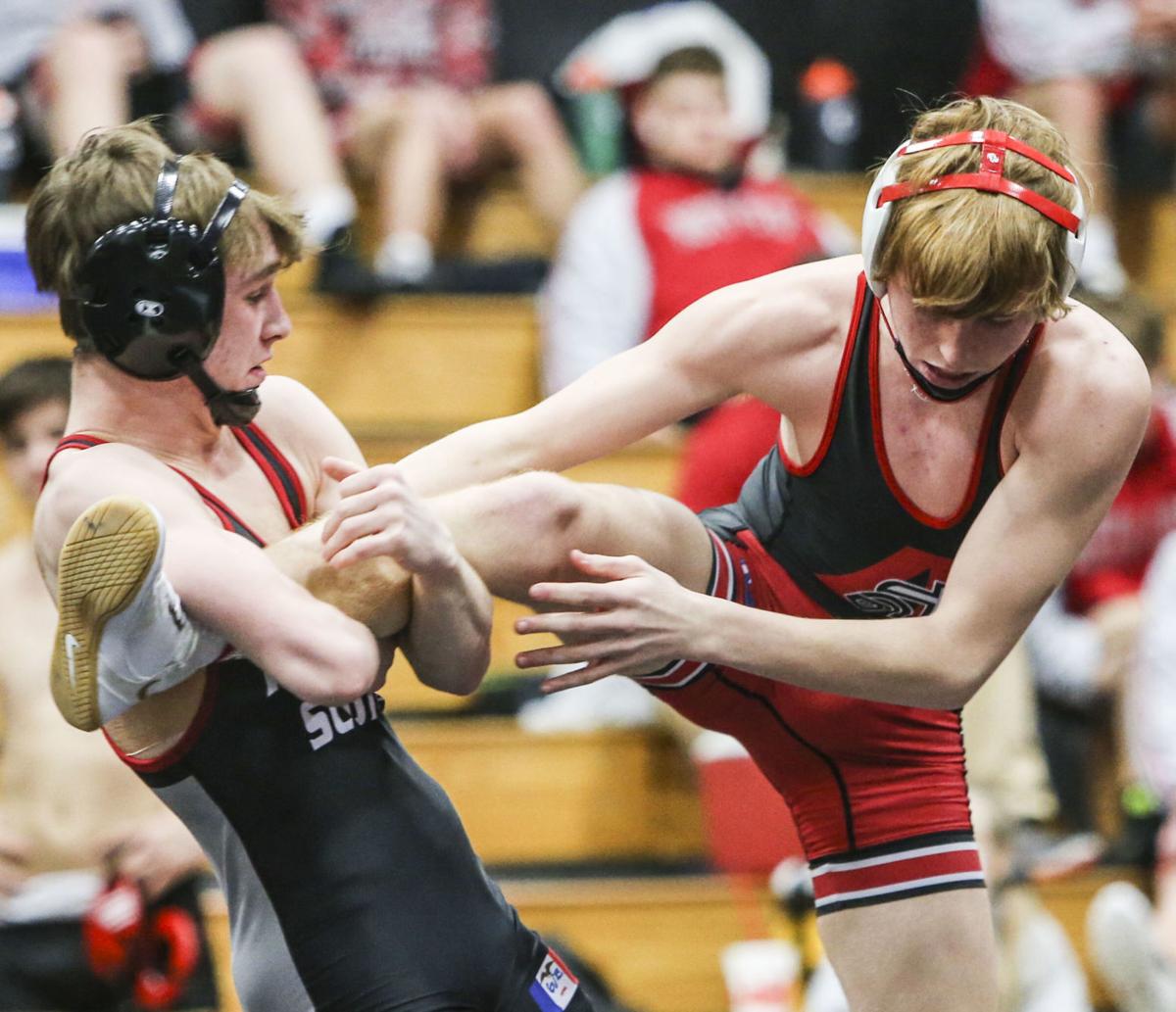 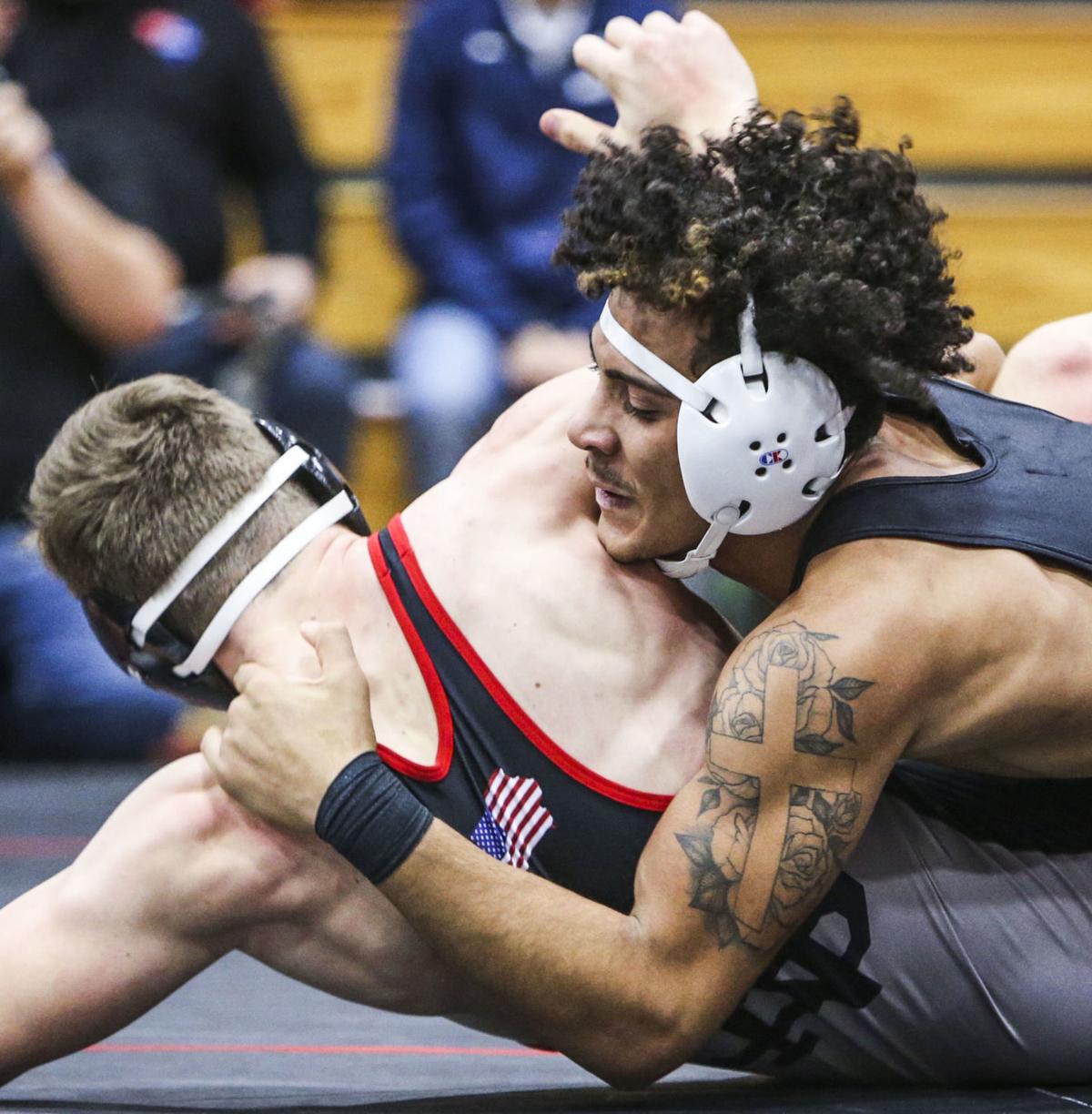 Assumption's Aiden Morgan takes down North Scott's Joey Petersen in the 195-pound finale during Saturday's conference tournament in Clinton. Morgan avenged his only loss of the year with a 6-1 decision. 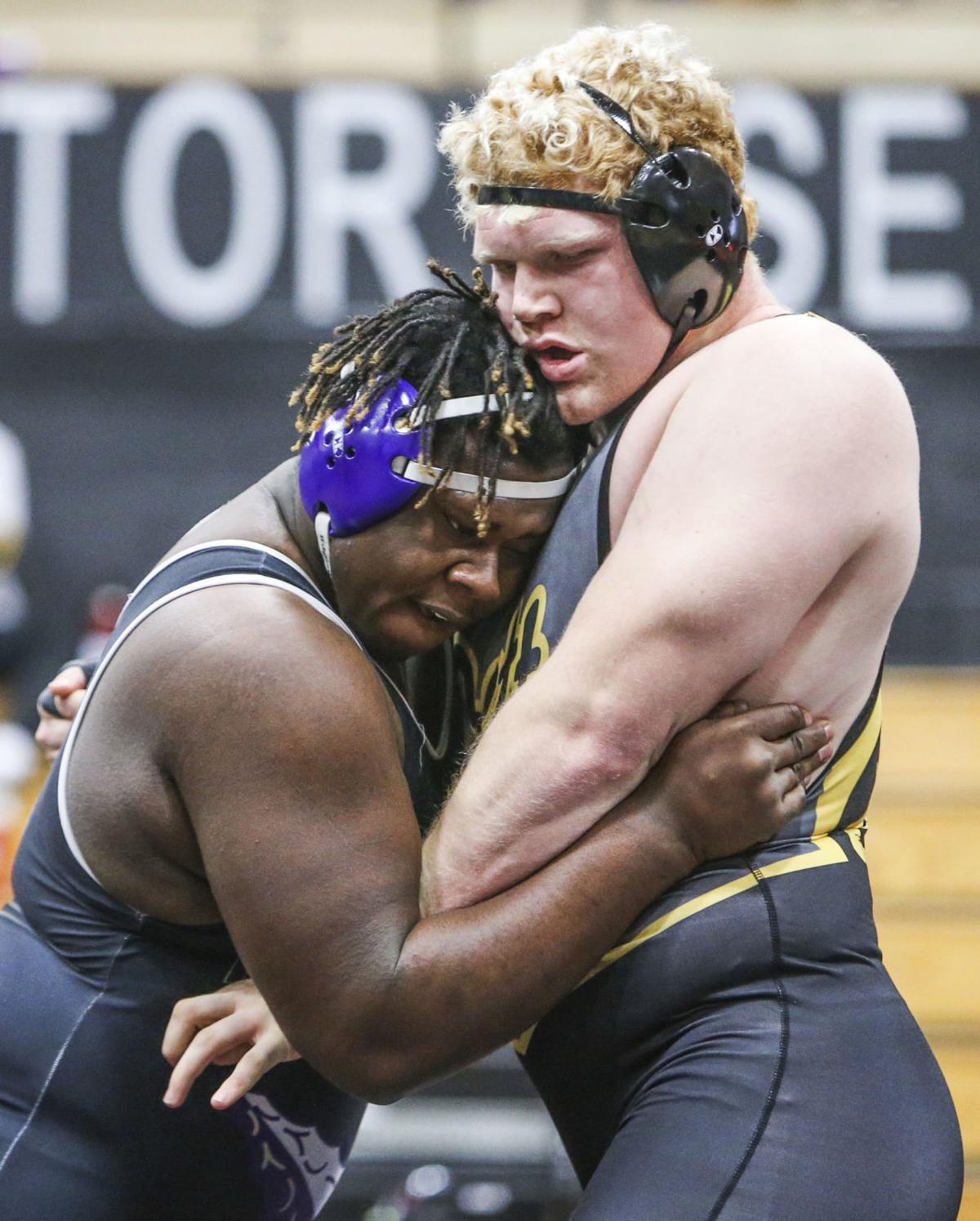 CLINTON — Josh Connor has had plenty of highlights during his wrestling career at North Scott High School.

He's been a four-year starter, accumulated 125 victories (at least 29 in each season) and qualified for the Iowa state tournament twice.

Now, the senior can add the distinction of three-time Mississippi Athletic Conference champion.

North Scott, with 12 of its 14 wrestlers placing in the top four, compiled 259.5 points to clip Bettendorf by 13.5 points for the title.

"At the beginning of the year, we didn't think we were going to be that good," junior 113-pounder Trace Gephart said. "We had a lot of spots open with football and didn't know what weight kids were going.

"It is a credit to coach (Drew) Kelly in just the way he pushes us and makes us believe we are one of the best teams out there."

In the finals, Connor majored Class 2A third-ranked Michael Macias of Davenport Assumption 13-4. Connor had two takedowns, turned Macias twice for near fall points and also had a couple of reversals to improve to 30-2 on the season.

"I've really been trying to push the pace of the matches early, getting a lot of points, staying on my offense the whole match," Connor said. "I'm just being more physical and getting into my shots and I'm able to finish better."

Conference success aside, Connor has his eyes on a bigger goal in the coming weeks. He has yet to place at the state tournament.

"I've done some good stuff here, but honestly I haven't finished where I've wanted to at the state tournament," he said. "There is more to come."

Connor is trending in the right direction.

Ranked fourth in 3A, Connor was undefeated until dropping matches to second-ranked Cole Ferguson of Waukee and third-ranked Carter Martinson of Southeast Polk last weekend at the Ed Winger Classic in Urbandale.

Both of those matches, though, were relatively close.

"Josh is right there," Kelly said. "He never gets too high or too low. He's been looking good here in the second half of the season. I'm excited to watch him moving forward."

Westlin gave up an opening takedown before dominating the final two periods of the match.

"I kind of came out not knowing what to expect," Westlin said. "After he got that first takedown, I started working better and realized what he could do."

The Lancers won the tournament despite not having third-ranked 160-pounder Deven Strief because of injury.

"I thought our guys wrestled pretty aggressively for the most part," Kelly said. "I just love the way our guys fought."

Bettendorf had the most individual champions with five.

It was the third MAC title for Liddle and second for Bohren while it was the first for the other three wrestlers.

"All of those guys wrestled really well," Bettendorf coach Dan Knight said. "This was a chance to make the breaks for yourself heading into districts. We had some do that and others made the road tougher for themselves."

Bohren tripped up Assumption's TJ Fitzpatrick in the finals, 6-1.

"I feel I'm on the right track, but I can definitely do better," Bohren said. "I felt a little tired. I need to work on my gas tank."

Matthys was the biggest surprise.

The senior, entering with an 11-9 record, upset top seed Parker Terronez of Assumption in the semifinals and followed with a first-period pin over Aydan Cary of North Scott in the finals.

"Nick works his tail off every day and does everything right," Knight said. "Sometimes, he just overthinks stuff, but he's getting better and better.

"I think today gives him confidence and proves to himself, 'I can compete with these guys and I can win.'"

Liddle rebounded from last week's loss to Ames' Gabe Greenlee in Urbandale with a 5-0 decision win over Togeh Deseh of Muscatine in the final.

"It is not where I want to be yet, but it is a stepping stone," Liddle said. "(The loss) last week was exactly what I needed. It was something to clear my head, get me straight and more focused on the final goal for the season."

Central DeWitt's Keaton Zeimet became the school's first MAC individual champion in any sport. Zeimet had two first-period falls at 120 pounds and improved to 32-2 on the season.

"Hopefully, the next generation will pick up more championships," Zeimet said, "but this feels really nice.

"I'm pleased but not satisfied. I want to be on top of that (state) podium in three weeks."

Assumption, which has been hindered by injuries for most of the season, took third in the team race. It had two individual champions in John Argo (182) and Aiden Morgan (195).

Morgan decisioned Joey Petersen of North Scott 6-1 in the final. In the previous two meetings between those two, including in a recent dual meet, Morgan had been pinned.

"Coming into this tournament, the only thing on my mind was beating Joey Petersen," Morgan said. "I knew I could beat him.

"I threw the legs in only one time. I didn't want to make any dumb mistakes. Going into the match, my thinking was I was going to shoot, take him down and let him go. That's how confident I was going into it."

Davenport Assumption has turned to one of its alums to lead its storied wrestling program.

Assumption's Aiden Morgan takes down North Scott's Joey Petersen in the 195-pound finale during Saturday's conference tournament in Clinton. Morgan avenged his only loss of the year with a 6-1 decision.