Chicago Blackhawks coach Derek King remembers the first time he met Brandon Hagel — he just wanted to be sure he didn’t take the heat if Hagel turned out to be a bust.

“When we first got him in Rockford (in 2018), young, baby-faced kid, he’s skinny and you’re wondering, ‘OK, am I going to blame the scouts on this one in about a month?’”

Hagel doesn’t even remember meeting King, the IceHogs coach at the time.

“But he was welcoming,” Hagel said. “I liked him, we got along, he’s a jokester for sure.

“It definitely boosts your confidence when you have a coach like that and (you’re) able to talk to and go to whenever you need and be able to joke around with you on off days. It gets your confidence up, especially when things aren’t going good.”

One thing King learned from those days: Don’t go by first impressions and don’t underestimate Hagel.

“He does not play like he’s whoever, 160 pounds soaking wet,” King said. “He plays like he’s 200 pounds. And he’s just gotten better and better.”

“Positioning on the ice and playing the game the right way. And with that, with his work ethic, and then he’s got some skill to back it up. He’s tracking on the right direction, let’s put it that way.”

Hagel, who’s 5-foot-11 and 174 pounds, said, “It was one of those things that I’ve always been the slim kid that needs to put on weight, but I’m pretty strong in certain areas that I need to be, especially in the corners. I’m not afraid to go in there.

“Obviously could put on a few pounds of muscle — it would definitely help me, and I know that. But it’s one of those things of proving people wrong and working my hardest every single shift and good things will happen.”

Hagel surprised as a rookie, scoring nine goals and adding 15 assists in 52 games, but he has taken another step in his evolution this season. He has almost matched last season’s goal total with seven through just 19 games entering Saturday’s road matchup against the New York Rangers — second only to Alex DeBrincat on the Hawks — to go along with two assists.

Six of those goals have come since a two-goal game against the Ottawa Senators on Nov. 1.

He had 41 goals and 61 assists his final season in Red Deer in 2018-19 before cutting his teeth with the IceHogs, getting an assist in eight games late in the schedule. The next season in Rockford, he put up 19 goals and 12 assists.

“And then last year (with the Hawks) I was more of a passer, I guess,” Hagel said.

“It’s been one of those things ... it (either) goes in the net or it doesn’t go in the net. I think I struggled a little bit with that last year, but also I think from last year it helped me a lot trying to find ways to score. I went through a time when I couldn’t put the puck in the net and I had tons of chances.

“Just having that full year and learning the league, it takes time. It did take me a little bit of time, I’m grateful it only took me a year.”

King said Hagel has matured a lot since Rockford.

“He would turn pucks over a lot on the half wall because he wanted to turn up and make plays and drive me nuts,” King said. “He got closed off quick because he was so light.

“He’s a little stronger now, so he knows to get it a little deeper, manages the puck a lot better and he’s playing the game the right way.”

Hagel said he needed that year in Rockford to grow, and even last season’s offensive slumps made him work on finer points of his game.

“You always hear to play in the NHL, it’s ‘off the boards and get the puck out’ is always a good play,” Hagel said. “This league is just full of (players that if) you turn the puck over, it’s probably in the back of your net.

“So I knew that was something I needed to change in my game — not necessarily change, just get better at.”

Hagel said he had to bear down on the nuances of taking care the puck — not trying to force offense — and eventually saw the connection to it paying off later in the offensive zone.

“I think it’s just keeping it simple,” he said. “You need to manage the puck. Either it’s in the neutral zone, (and if) you’re turning the pucks over there, it’s not going to get in the O-zone.

“If you just take care of those little things — like Derek was saying, not turning the pucks over, losing battles on the wall, losing pucks on trying to break the puck out — I think those are going to affect your offensive game.

“Just be smart there, and when you get in the O-zone, anything can happen.”

Storm fall to Rivermen in OT

PEORIA — The Quad City Storm started the evening off on the right skate against the hosting Peoria Rivermen, but couldn't end it the way they …

Binninigton's struggles continue as he allows seven goals on 35 shots.

It was the seventh straight victory overall for the Avalanche.

Di Salvo — who is the SPHL's all-time wins leader — had been with the Storm since the franchise's first year in 2018.

In some way or another, we have all been affected by the supply chain interruptions that are hitting our economy.

Blues do it again, coming from behind for a 5-3 win over Nashville

Hochman: 'Huuuuus!' Backup goalie Ville Husso makes a name for himself in Blues' win against Nashville

On Monday night, No. 35 in the Blues’ 1990s-style sweater looked more like No. 31 in that sweater, be it Grant Fuhr or Curtis Joseph. 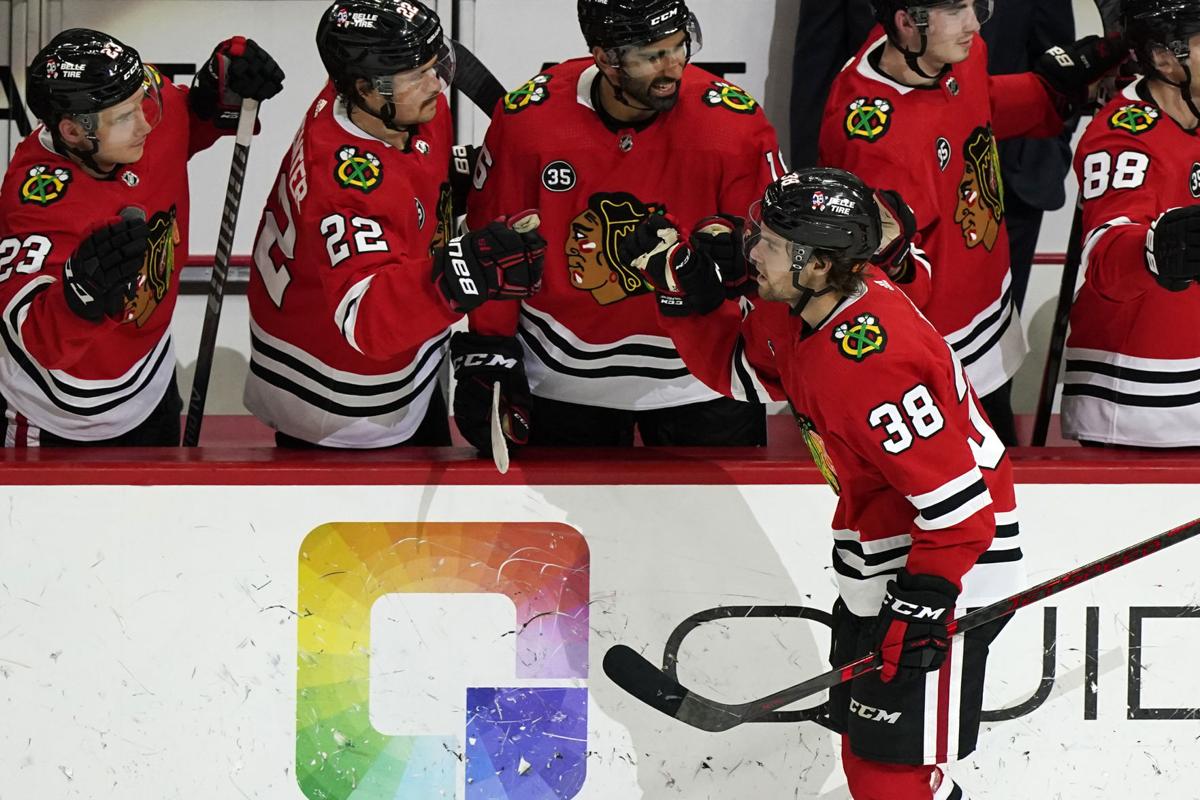 Chicago Blackhawks left wing Brandon Hagel (38) celebrates with teammates after scoring a goal against the Nashville Predators during the second period of an NHL hockey game in Chicago, Sunday, Nov. 7, 2021. 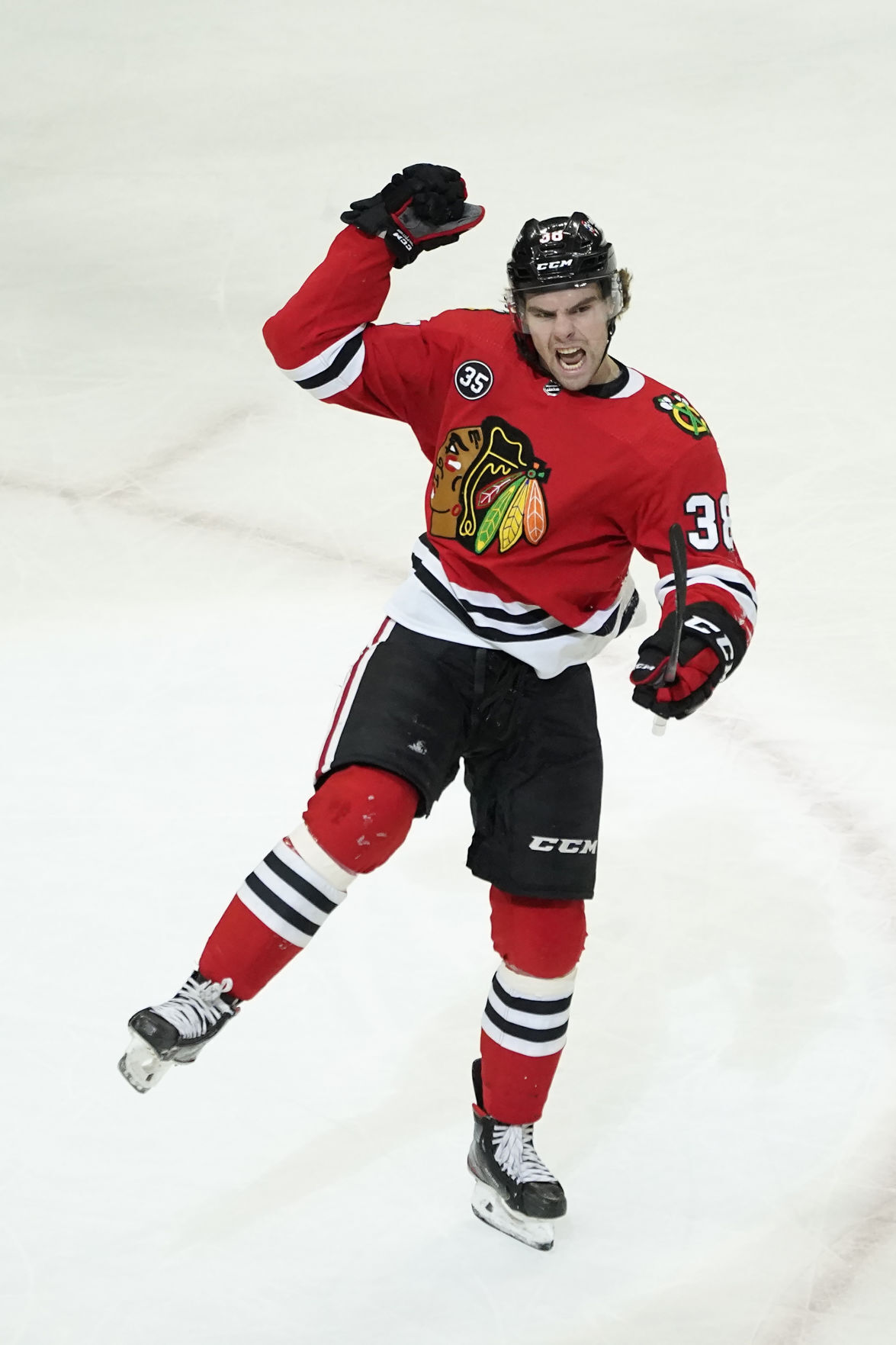 Chicago Blackhawks' Brandon Hagel celebrates his goal during the first period of an NHL hockey game against the Ottawa Senators Monday, Nov. 1, 2021, in Chicago.