The final horn is poised to sound on Pat Foley’s Chicago Blackhawks play-by-play career after next season.

The Hawks said Wednesday Foley will work a reduced schedule of games in 2021-22, his 39th season with the team and his last on NBC Sports Chicago.

Foley, who is in his 60s, said in the announcement he spoke to the Hawks about his future “because I cannot guarantee that I would like to continue beyond the length of my contract that ends after next season” and it was time to look for his successor.

Hawks Chairman Rocky Wirtz said in a statement the team is “excited to begin this search,” noting the franchise was “thankful for the memories Pat has created for our fans through the years and he will continue to be a part of the Blackhawks family.”

It was not announced who will fill in on the games Foley doesn’t work next season.

This isn’t the first time the Hawks have said farewell to Foley, the 2014 winner of the Foster Hewitt Memorial Award — a high honor for announcers in hockey’s Hall of Fame in Toronto.

But unlike their divorce in 2006, when the team abruptly withdrew its contract offer and Foley wound up announcing AHL Chicago Wolves games for two seasons, the team said it plans a yearlong celebration.

“Pat Foley has been synonymous with Chicago Blackhawks hockey for well over a generation,” Wirtz said in the announcement.

The news comes a month after the conclusion of an unimpressive Hawks season that was remarkable only in the conditions under which it was played. COVID-19 precautions meant players, coaches and other team staff were regulated in many respects, including strict restrictions in their movements on the road.

Foley, who announced away games alongside analyst Ed Olczyk off monitors in Chicago, made a flip remark during the season finale, “Had I been traveling with the team this year, I might have put a bullet in my head.”

After some viewers expressed shock and dismay at the suicide imagery, Foley said he wished he hadn’t said it.

“I’m sorry if I offended some folks,” Foley said on air. “Apparently I did, so I apologize.”

The team came down hard on Foley the next day, issuing a strongly worded statement that it was “incredibly disappointed” in Foley’s comments, called it “an absolutely unacceptable choice of words that trivialized mental health and suicide” and said it planned on “speaking to Pat further about his insensitivity.”

It was not the only time he said something that got him into trouble, but his talent and popularity with Chicago hockey fans carried him through.

Just as the rancorous 2006 split between Foley and the Hawks upset team supporters, they seemed delighted when John McDonough, who was brought in as Blackhawks president in 2007, patched things up and re-signed Foley in 2008.

Foley’s relationship with fans may be rooted in the fact he grew up among them, the son of suburban Buick dealer. He graduated from Loyola Academy in Wilmette, then Michigan State.

“I was that kid who had the transistor radio under the pillow just loud enough to hear Lloyd (Petit)” call Hawks games, Foley told the Tribune’s Ed Sherman in 2014.

“Pat can be brutally honest,” Olczyk told Sherman. “I can’t speak for (other former Hawks teammates), but as long as it was fair, I had no problem with it. It was something I appreciated as a player. He would say, ‘That was a bad penalty by Olczyk.’ You say it and move on.”

Added Wirtz at the time: “If you’re having a lousy game, there’s nothing wrong with saying it. He’ll say what the fan is saying. If all you have is yes people, you don’t have much of an organization.”

While at Michigan State, Foley called baseball and hockey games, segueing to his pro debut with the International Hockey League’s Grand Rapids (Mich.) Owls in 1977 en route to the Blackhawks in 1980.

It helped that Michael Wirtz, brother of then-chairman Bill Wirtz and Rocky’s uncle, was friendly with Foley’s father, spending a bit of time at the dealership in Wilmette.

What ultimately sold the Wirtzes on Foley, however, was his work. He sounded far more polished and mature than a 26-year-old.

For Foley, this was a dream come true.

“Any kid who eats, sleeps and breathes sports, grows up wanting to play for their hometown team,” Foley said in his statement Wednesday. “Thankfully for me, I realized early on that my playing career wouldn’t last beyond intramurals and that broadcasting was the next best thing to staying around the game.”

Olczyk, his broadcast partner the past 15 seasons, added in the announcement: “Pat Foley is not just a legendary broadcaster and great partner in the booth, but I’m proud to say he is an even better friend. … I’m so happy for him to be able to go out on his own terms and so proud of what he has accomplished. Pat Foley will always be the voice of Blackhawks hockey.”

Fans have been surveyed about vaccine mandates.

The Chicago Blackhawks filed amendments to their motions to dismiss two lawsuits stemming from the team’s handling of an alleged sexual misconduct complaint against former video coach Brad Aldrich in 2010.

The Quad City Storm are holding a free agent camp Oct. 5 and 6 at the TaxSlayer Center, guaranteeing at least one spot on the team's main training camp roster and an opportunity to earn a spot on the regular season roster. 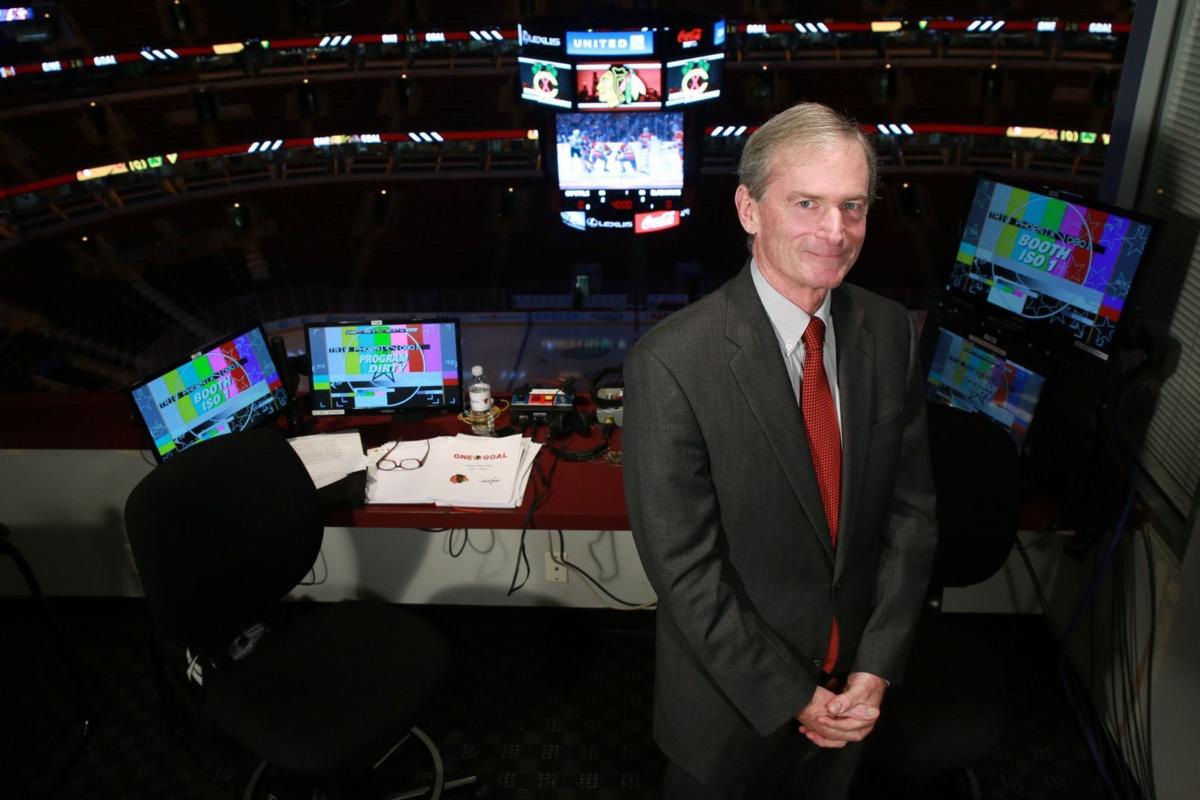 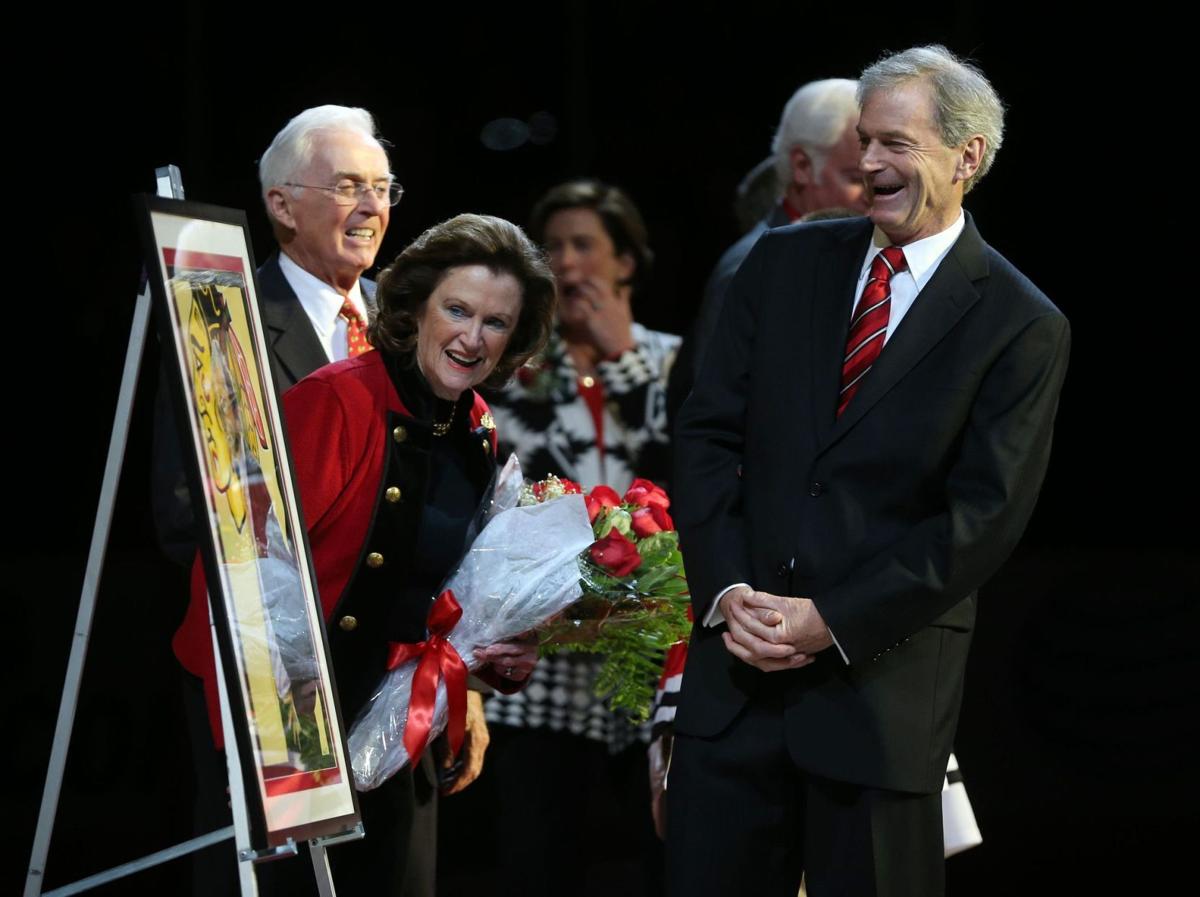 Chicago Blackhawks broadcaster Pat Foley is honored before a game in 2013.