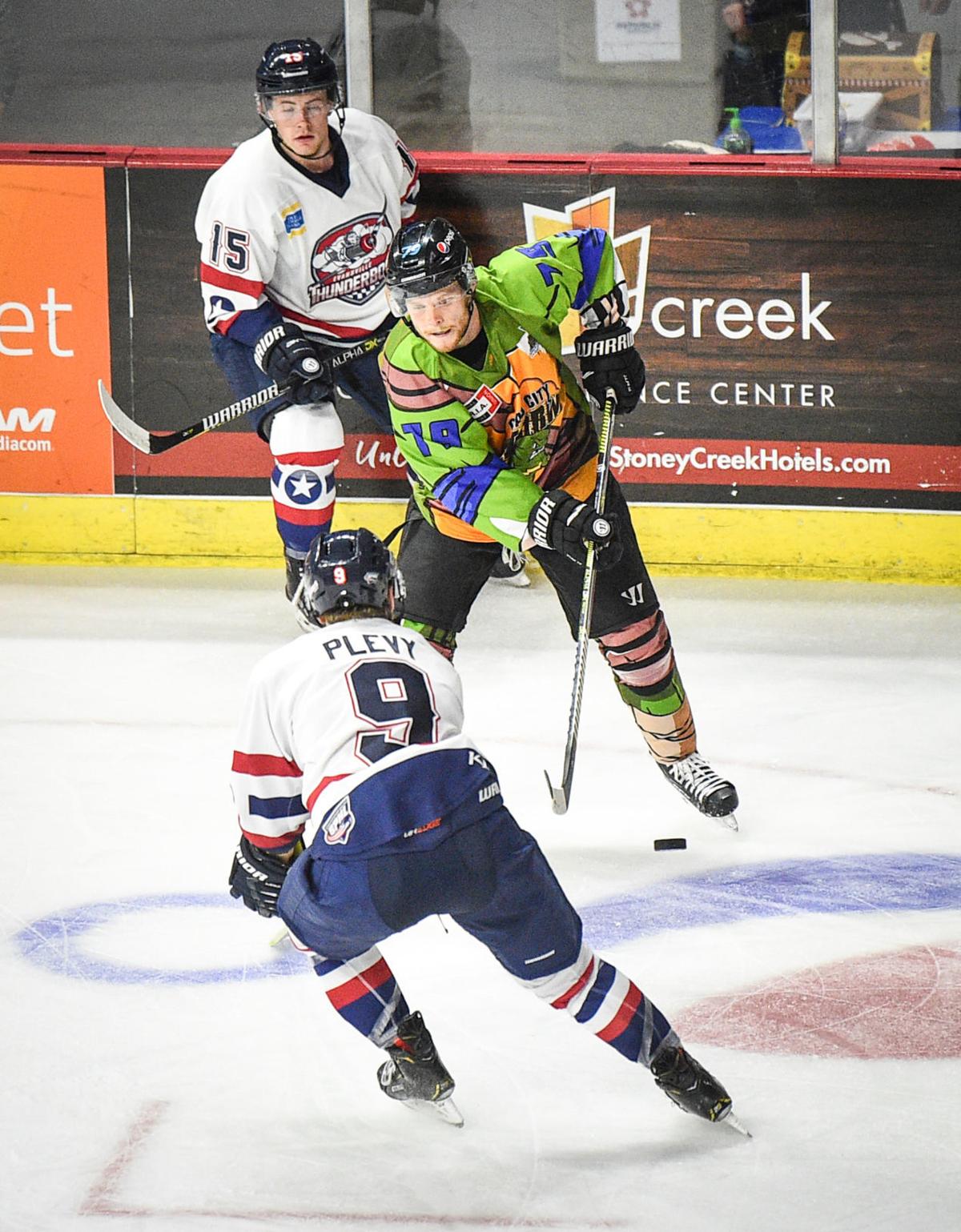 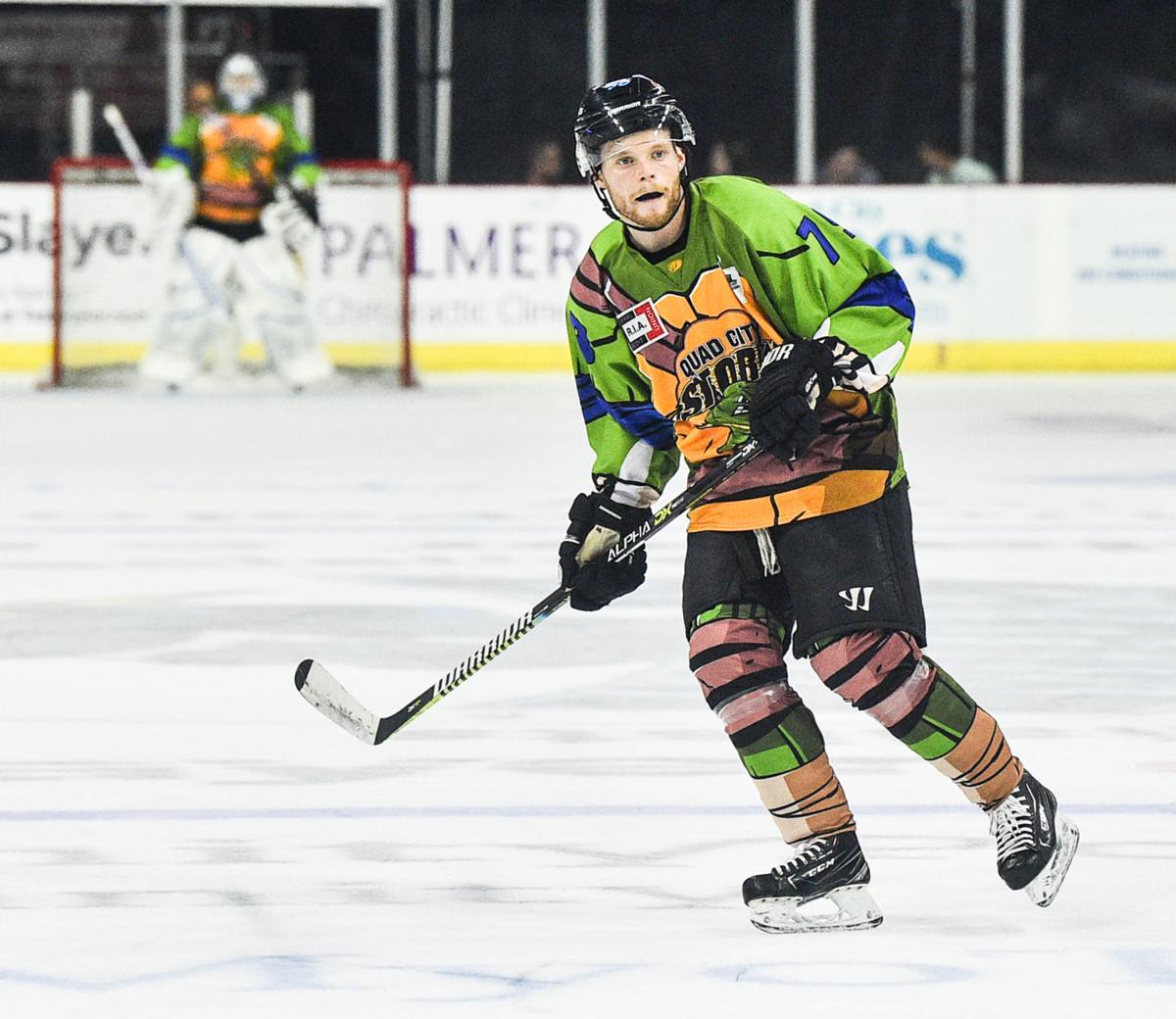 As a rookie, Mathias Åhman is usually charged with some of the less glamorous tasks on the team — picking up pucks and collecting water bottles to name a few.

But it's safe to say he's enjoying the pro game.

"It's been amazing, compared to college," the Quad City Storm defenseman said. "There's no homework."

Homework or not, Åhman has proven to be a quick study since joining the Storm out of University of Wisconsin-Stout. He is tied for the lead among rookie defensemen with four goals and is second with 14 points. That number ranks sixth among all defensemen in the Southern Professional Hockey League, a strong start to Åhman's pro career.

"It's been fun. I didn't expect it at all," said Åhman, 25. "It's really just been some opportunities, and I feel like I've been working hard all summer just to get a spot and play. I don't know how to explain it, but I didn't expect it coming here."

Åhman has come a long way from his hometown of Härnösand, Sweden.

After finishing his high school career, Åhman was looking for more and came to the U.S., playing two seasons of junior hockey for the Twin City Steel in Minnesota.

From there, he went to UW-Stout, where he had a strong college career for the Blue Devils. His junior year he was a second team AHCA All-American selection after finishing with 22 points, 16th nationally among all Division III defensemen.

He ended his college career with 25 goals and 29 assists, but when he was looking for a place to break into the pro game, Åhman only really received interest from the Storm.

"I don't know if it's maybe because he's Swedish and people don't want to deal with immigration, or maybe they didn't think they'd have him for very long," Storm head coach Dave Pszenyczny said. "It's one of those things where I guess sometimes you find a diamond in the rough."

That has changed, as Pszenyczny has had to field calls from other teams in the league about Åhman's availability. However, there hasn't been any desire to ship him off somewhere else.

What Pszenyczny is really waiting for is a call from the ECHL, but surprisingly it hasn't come.

"All the time, (assistant coach Jake Toporowksi) and I look at each other and ask how is this guy not in the Coast yet?" Pszenyczny said. "Every team in the league asks about him. ... If he has to leave tomorrow to get called up, I'm going to be so proud of him because what he's done for our team and carried that back end offensively is what we need."

Being overlooked by the other teams in the league drives Åhman, eager to show his opposition what they missed out on.

"There's so many good players out there but definitely, I love it here and I'm so happy that Dave reached out," he said. "It definitely gives a little chip on the shoulder."

While Åhman's numbers generate a lot of attention, his defensive game has been a blessing for Pszenyczny. Paired with veteran defenseman Joe Sova, Åhman has learned plenty from his partner, but that relationship goes both ways.

"He’s making me better and we have a unique relationship going right now," Sova said. "I think our relationship of, he speaks, I listen, and I speak, he listens, just goes really well together."

As a result, the duo are relied on throughout the game to shut down the other team's top lines. Pszenyczny estimates that pairing plays around 30 minutes a game, and though they're a combined minus-12, that stat doesn't tell the whole story.

"When you're playing that many minutes, you're normally not going to be in the 20s," Pszenyczny said. "I couldn't ask for a better D-pairing. Those two, when the game's on the line, they're going to be out there."

Åhman's next hurdle is to get used to the lengthy grind of the pro game. He's played 26 games this season, just one shy of the most he played while in college. The most games he's played in his career was 44 while in juniors, and he has to get ready for the second half of the 56-game SPHL schedule.

In some ways, that's his homework, but it's homework he enjoys.

"I still have a lot of gas in the tank, but you can feel it though that it's way more games," he said. "I've always loved hockey, this is what I've wanted to do since I was a kid, so kind of soak it in that I'm playing hockey full time."

Storm activate Klecha: The Quad-City Storm activated forward Dakota Klecha off the 30-day injured reserve. Klecha has been on IR since Dec. 18 and has missed the last eight games.

In 16 games this season, Klecha has six goals and two assists.

Storm ice painting: The Quad-City Storm are letting fans paint the ice at the TaxSlayer on Tuesday, Jan. 28, prior to their Hockey Fights Cancer game against the Peoria Rivermen on Feb. 1.

It is free to paint the ice and paint will be provided.