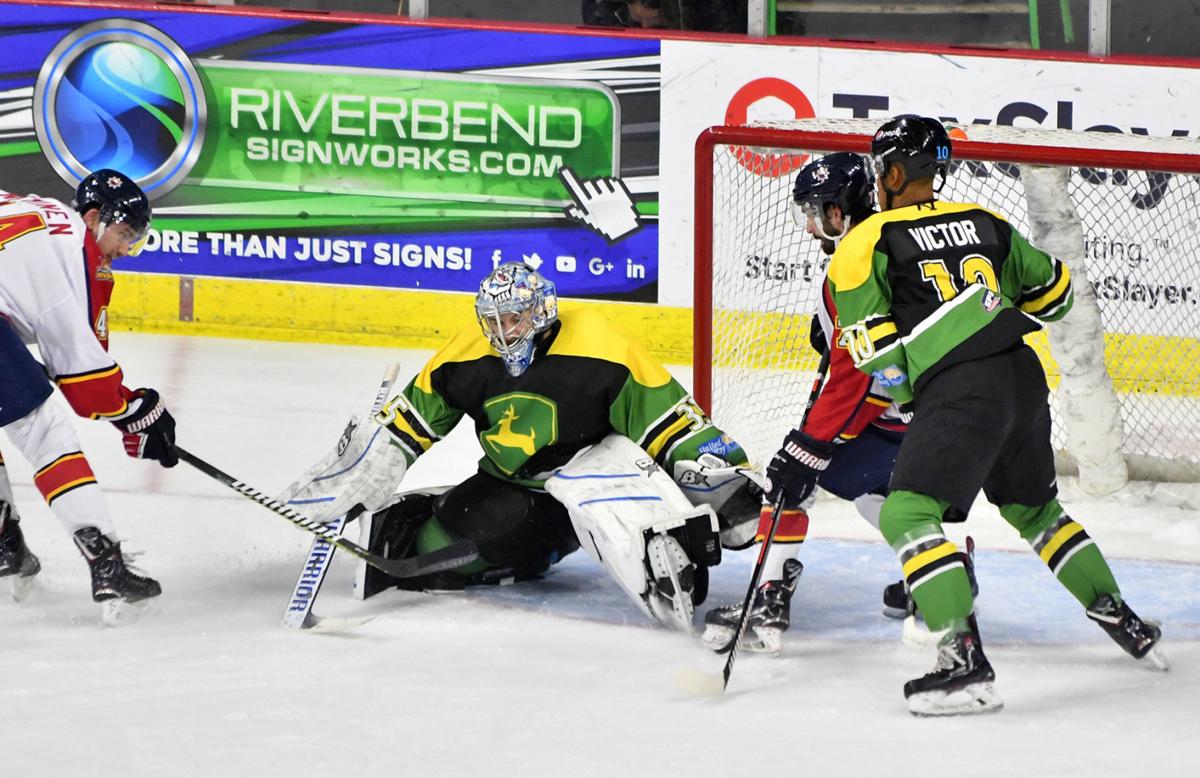 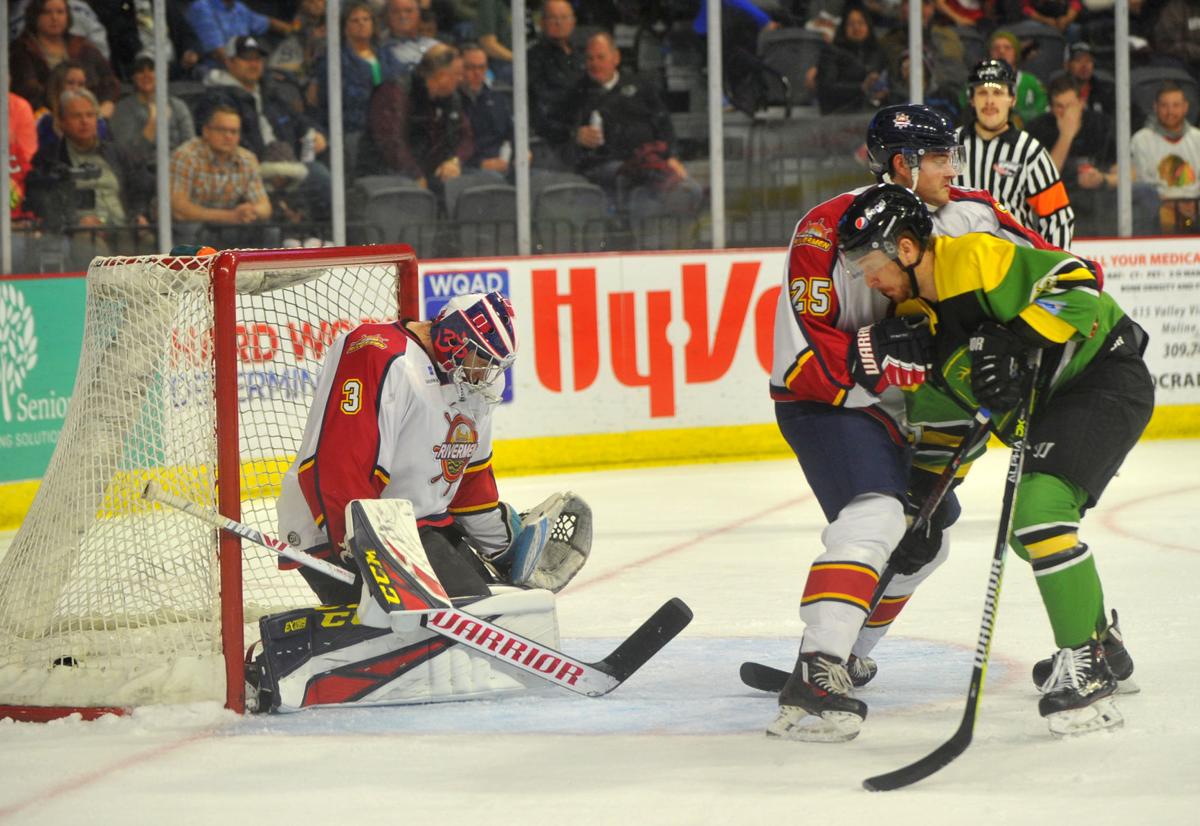 The Quad City Storm's Dakota Klecha scores the second goal for the Storm past Peoria Rivermen's Nick Neville (25) and goalie Eric Levine during the first period of Friday's game at the TaxSlayer Center.

So far this season, the Quad-City Storm have shown they're much closer to the Peoria Rivermen than they were last year.

But they still have yet to figure out how to get over the hump.

Darren McCormick's overtime goal gave Peoria a 4-3 win over the Storm in their first meeting of the season at the TaxSlayer Center. The Storm also pushed the Rivermen to overtime in their season opener but also fell short in that contest. It's the fifth straight loss to Peoria, dating back to Feb. 9 of last season.

The Storm travel to Peoria Saturday for a rematch with the league-leading Rivermen at the Peoria Civic Center.

"We've just got to get back to practice and work on 3-on-3 more. It all starts in practice," defenseman Junior Harris said. "I don't really have the words for it right now. I'm so upset we (blew) this game. We're going to come back tomorrow, and tomorrow is going to be a different story."

During the game, the Storm announced the NHL’s Stanley Cup will be coming to the TaxSlayer Center for the team’s Dec. 20 game against the Rivermen. The Rivermen will host the Cup the following night at the Peoria Civic Center when the Storm travel to Peoria.

With the 3-on-3 overtime format, McCormick found himself open in the Quad-City zone after a bad change and beat Storm goaltender Peter Di Salvo 55 seconds into the extra frame, capping a night that once again featured plenty of emotions between the two rivals.

There were two fights and plenty of words between the players as well as both head coaches after the second period.

"Obviously there's a lot of history, being in a 10-team league, and there's always players coming and going," Storm head coach Dave Pszenyczny said. "They have a few of our players that were here last year and vice versa. I think that's great that emotions run high. It's good entertainment. ... I'm going to stand up for my players."

Mathias Ahman put the Storm on top early, his blast from the top of the circles trickling through the pads of former Storm goaltender Eric Levine for a power-play goal at 6:33 in the first period.

The Storm nearly killed off a 90-second 5-on-3 Peoria advantage soon after, but as the final penalty expired, a shot from Zachary Borsoi trickled through the arms of Di Salvo, and before the Quad-City goaltender could jump on it, Zach Nieminen pushed the puck into the net for his fourth goal of the season, tying the game at 14:52.

Dakota Klecha gave the Storm the lead back heading into the first intermission, getting to the front of the net to bury a feed from Dalton Mills for another power play goal at 17:55 in the period.

Since starting the season 0 for 29 on the power play, the Storm have scored five goals on their last 16 chances.

The Storm played without forward Michael Casale from the second period on after he left the game with an upper body injury. Pszenyczny said he's day to day.

Peoria knotted the game back up as a shot by Nieminen from the side boards appeared to catch Di Salvo off-guard as the puck found the back of the net at 3:10 in the second frame.

"Just little mistakes, little things that we need to fix," Klecha said. "It was a battle the whole game. It's unfortunate we came away short against them in overtime again."

The Storm had a golden chance to retake the lead quickly following but were thwarted by a familiar face in the second period.

Pryce got loose and fired a shot that got past Levine but hit the post. With Levine out of position, Shane Bennett had a great look at an open net but former Storm defenseman Skyler Smutek dove in front of the puck to keep the game tied.

The Storm were hit with another extended 5-on-3 penalty kill to start the third period, and Jordan Ernst capitalized with a goal to give Peoria a 3-2 lead 1:50 into the frame.

Klecha tied the game up at 14:38 in the third period with his second goal of the game.

"We've come back in a lot of games. We play with a lot of grit, we make smart plays when we need to make them," Klecha said. "I still think we need to clean that up a bit when we have the lead and when we're tied, we just need to keep it simple."

The Quad City Storm's Dakota Klecha scores the second goal for the Storm past Peoria Rivermen's Nick Neville (25) and goalie Eric Levine during the first period of Friday's game at the TaxSlayer Center.