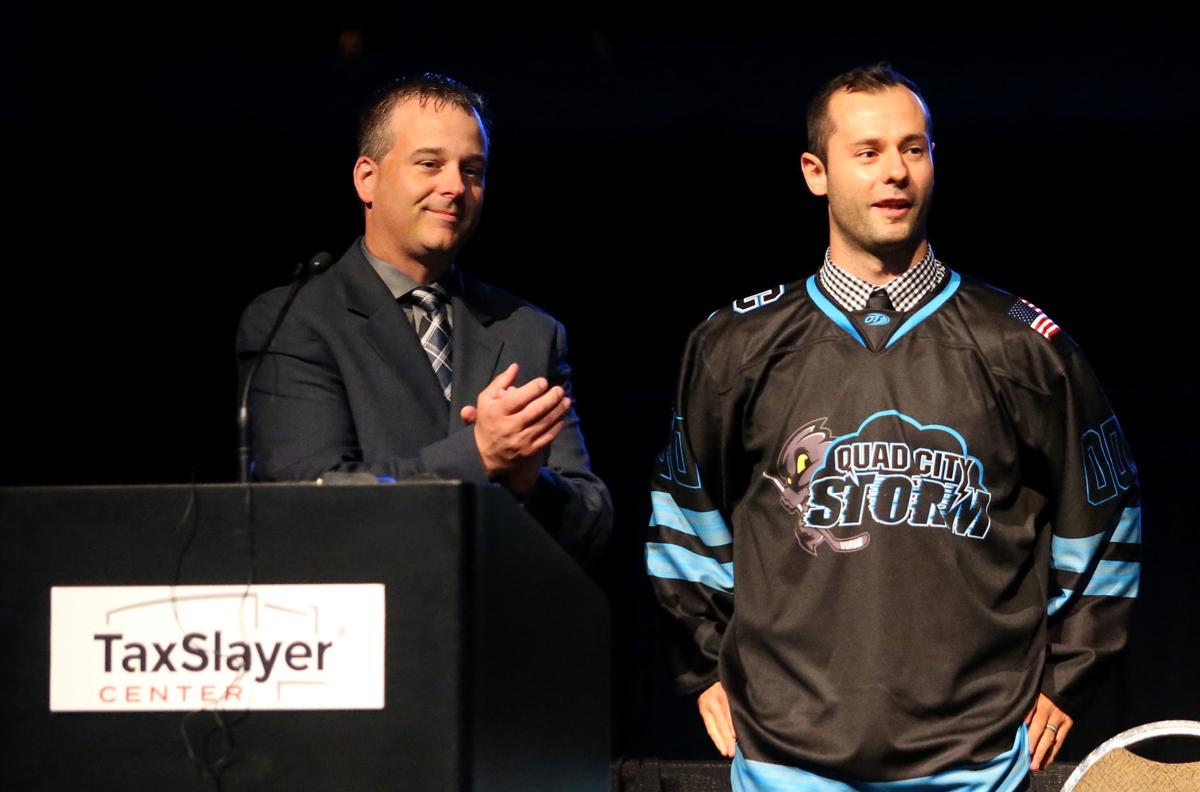 New Quad-City Storm coach Dave Pszenyczny, right, dons the new jersey for the team Thursday during a press and fan conference held at the TaxSlayer Center in Moline. Co-owner Ryan Mosley stands next to him. 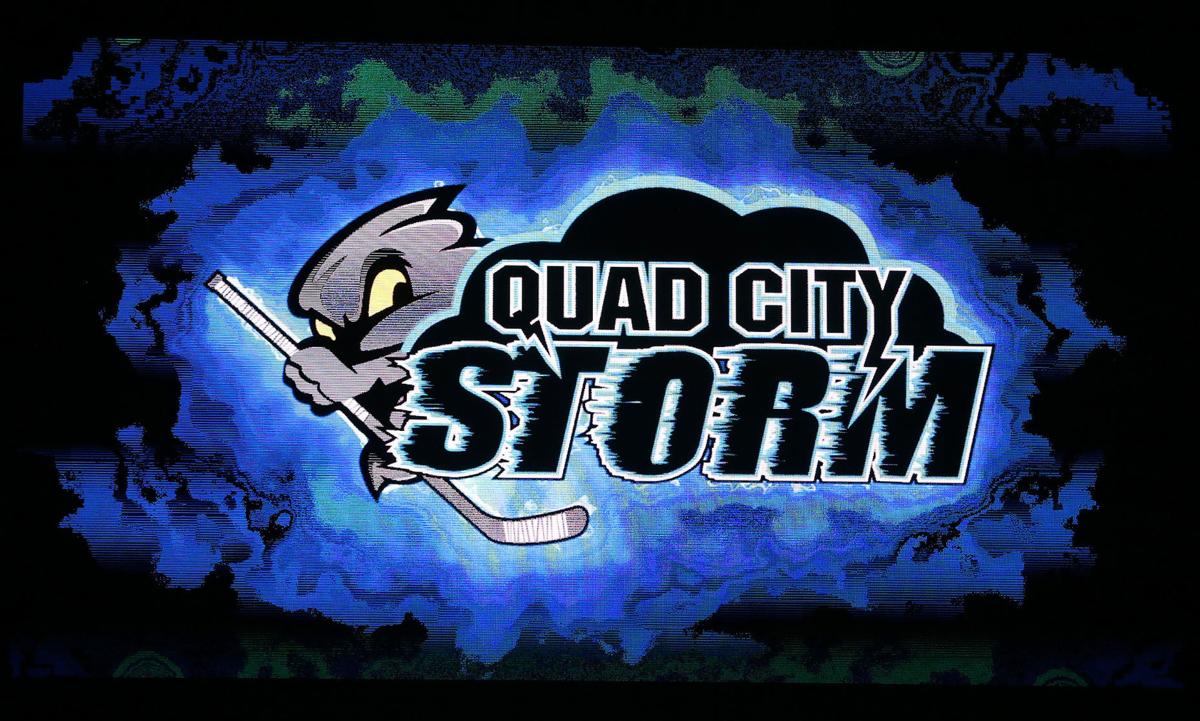 The new logo for the new Quad-City Storm was unveiled Thursday during a press and fan conference held at the TaxSlayer Center in Moline. The team is a member of the Southern Professional Hockey League.

The weather that has rolled through the Quad-Cities the last few days should have come with a spoiler alert.

The new Quad-Cities hockey franchise unveiled its name and logo Thursday at the TaxSlayer Center, the Quad-City Storm taking its place in the 23-year history of hockey in the community.

"Anybody that comes here is now a storm chaser," team co-owner Ryan Mosley said. "We have a hockey team that we hope has energy on and off the ice, through the community, and if we can continue that through our players and our fans, we want to make this an exciting place to be and funnel all that energy right into here."

Mosley said nine people submitted the Storm name through the naming contest, one of the top choices.

He declined to list the other choices but did say that a lot of options were variations on the Quad-City Mallards name, which wasn't an option due to the ECHL owning the trademark on the former franchise.

"We went with the Storm because it's one of those things that I cannot think of anything else with more energy," Mosley said.

The announcement, complete with an introduction video and jersey reveal, was met with cheers from the fans in attendance, their excitement about the continuation of hockey evident.

"It's only fitting after the tornado last night," head coach Dave Pszenyczny said. "Go with something new and I think we're going to be a force to reckon with, and Storm is going to be a perfect logo and team name for the Quad-City area,"

The Storm will make their home debut on Oct. 20 against the Peoria Rivermen, which will be a reunion for Pszenyczny, who played for Peoria the last three seasons.

"It's never easy after you play for a team, go to face them again," Pszenyczny said. "There's so many familiar faces, but at the end of the day, it's hockey. My job is to win those games, and there's no friends out there. That's the way I played when I was playing, and that's how I'm going to coach."

The team name and logo is a big step for a franchise that didn't exist until Mosley and fellow co-owner John Dawson stepped in a month ago to keep hockey in the Quad-Cities after the Mallards announced they were ceasing operations in March.

The team now has a name, coach and website, QuadCityStorm.com, as well as a social media presence.

"When we made the first announcement, the guys were like, 'We don't have anything,'" SPHL commissioner Jim Combs said. "They've really stepped up to the plate with getting the logo, the trademarks and everything done. That part's been really good."

Combs said the entire league schedule will be released in the next two to three weeks, and the Storm are already working on getting their season ticket base established.

They've been contacting people who put down deposits on season tickets back in April, and Mosley said he expects season ticket sales to be open to the general public in early July.

The team released season ticket price points Thursday, with packages costing either $378, $490 or $840.

"The last three weeks have been extremely hectic," Mosley said. "Long hours, 15, 17 hour days and now we're finally getting, not in the home stretch, but a more organized stretch because we've been incognito for two weeks about this name, going back and forth with logo, drafting, the jersey so there's been a lot of buildup to get this done.

"It's not going to get any easier, but we're going to keep working as hard as we need to."

Meanwhile, Pszenyczny is working on recruiting players to take the ice.

"I was kind of soft recruiting before everything was announced a few weeks ago, and then after it got announced my phone has been non-stop, emails, any sort of social media," he said. "It's nice because I do have strong ties with former players and players that I know know somebody else. It's different being on the other end of the phone ... but it's fun, I enjoy it.

"The recruiting is coming along very nice. We're going to have a great team."

New Quad-City Storm coach Dave Pszenyczny, right, dons the new jersey for the team Thursday during a press and fan conference held at the TaxSlayer Center in Moline. Co-owner Ryan Mosley stands next to him.

The new logo for the new Quad-City Storm was unveiled Thursday during a press and fan conference held at the TaxSlayer Center in Moline. The team is a member of the Southern Professional Hockey League.