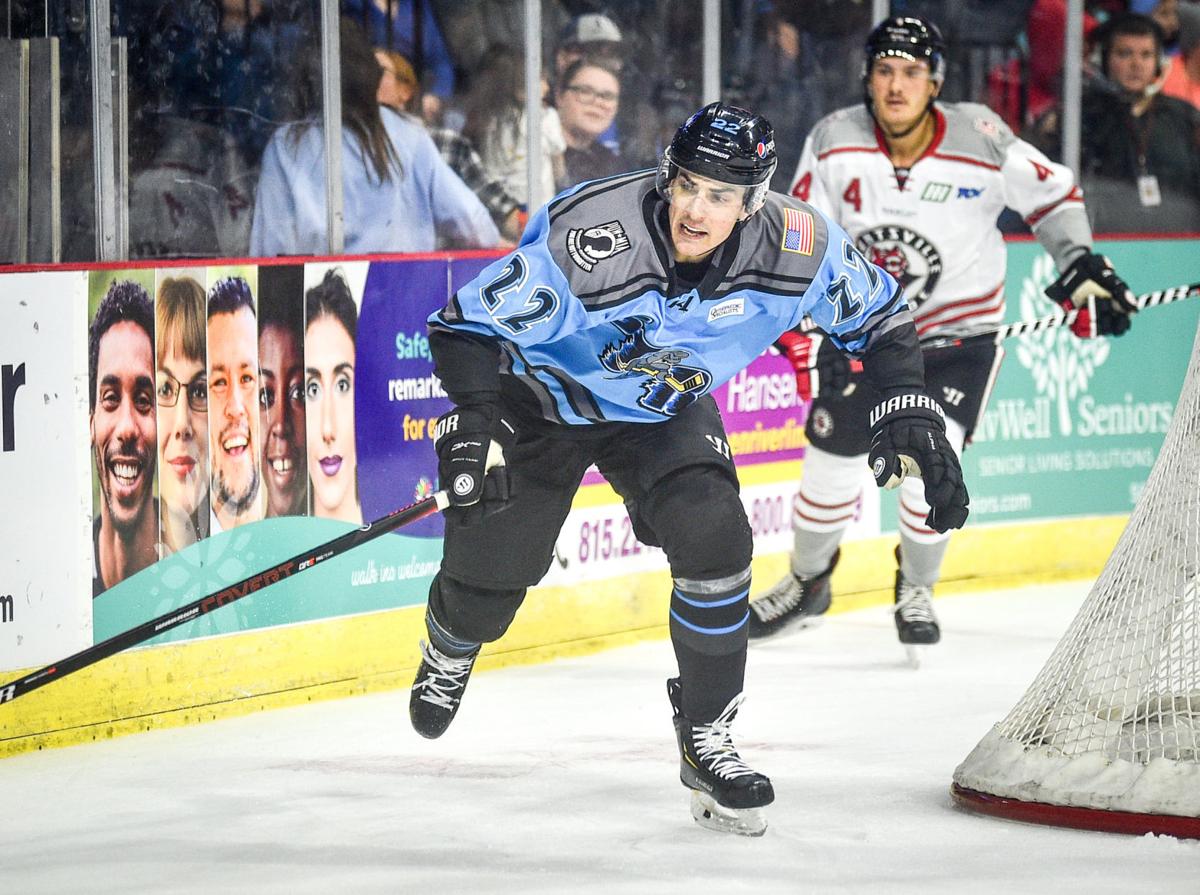 The Quad-City Storm's Tommy Tsicos chases down the puck during a game earlier this season. Tsicos has specialized in doing the little things to help the Storm win. 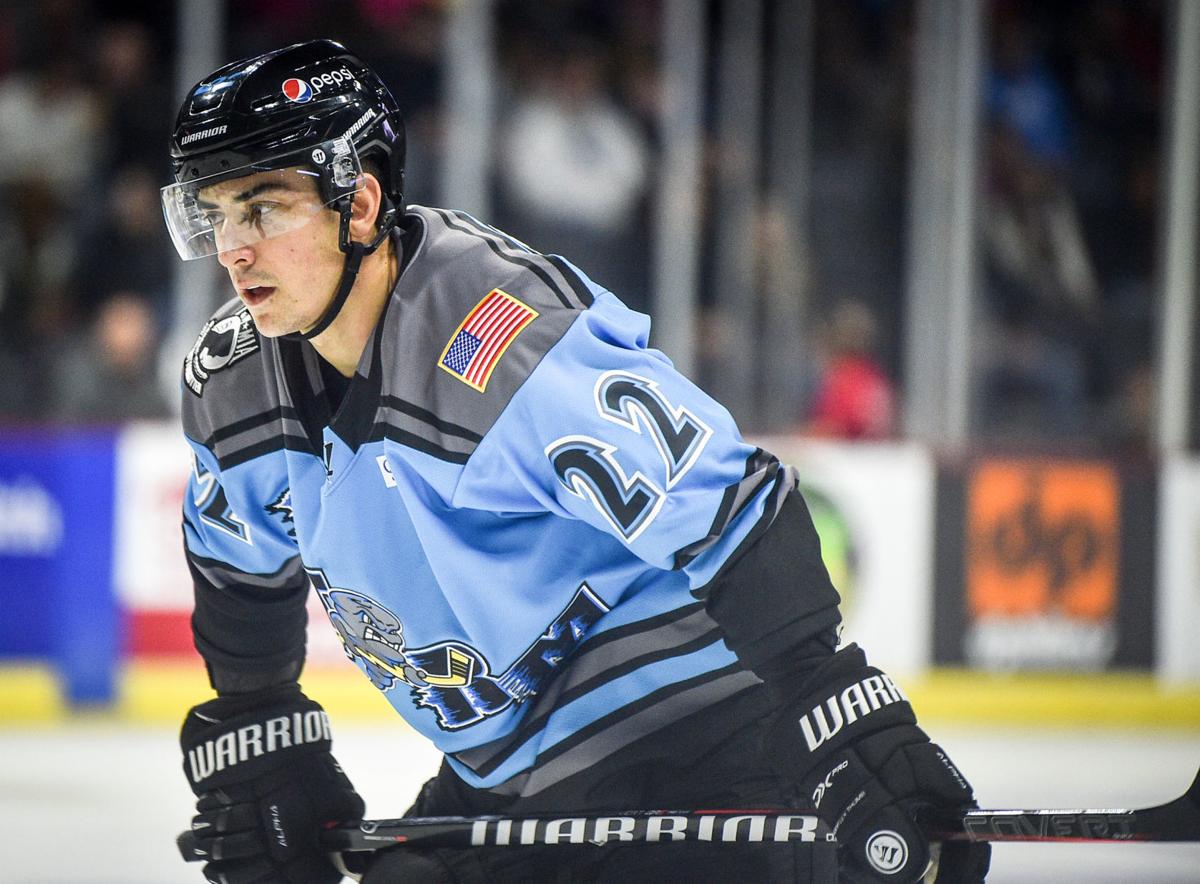 Quad-City Storm's Tommy Tsicos (22) stands ready before the face off during their season opener against the Huntsville Havoc Friday, October 25, 2019, at the TaxSlayer Center in Moline. 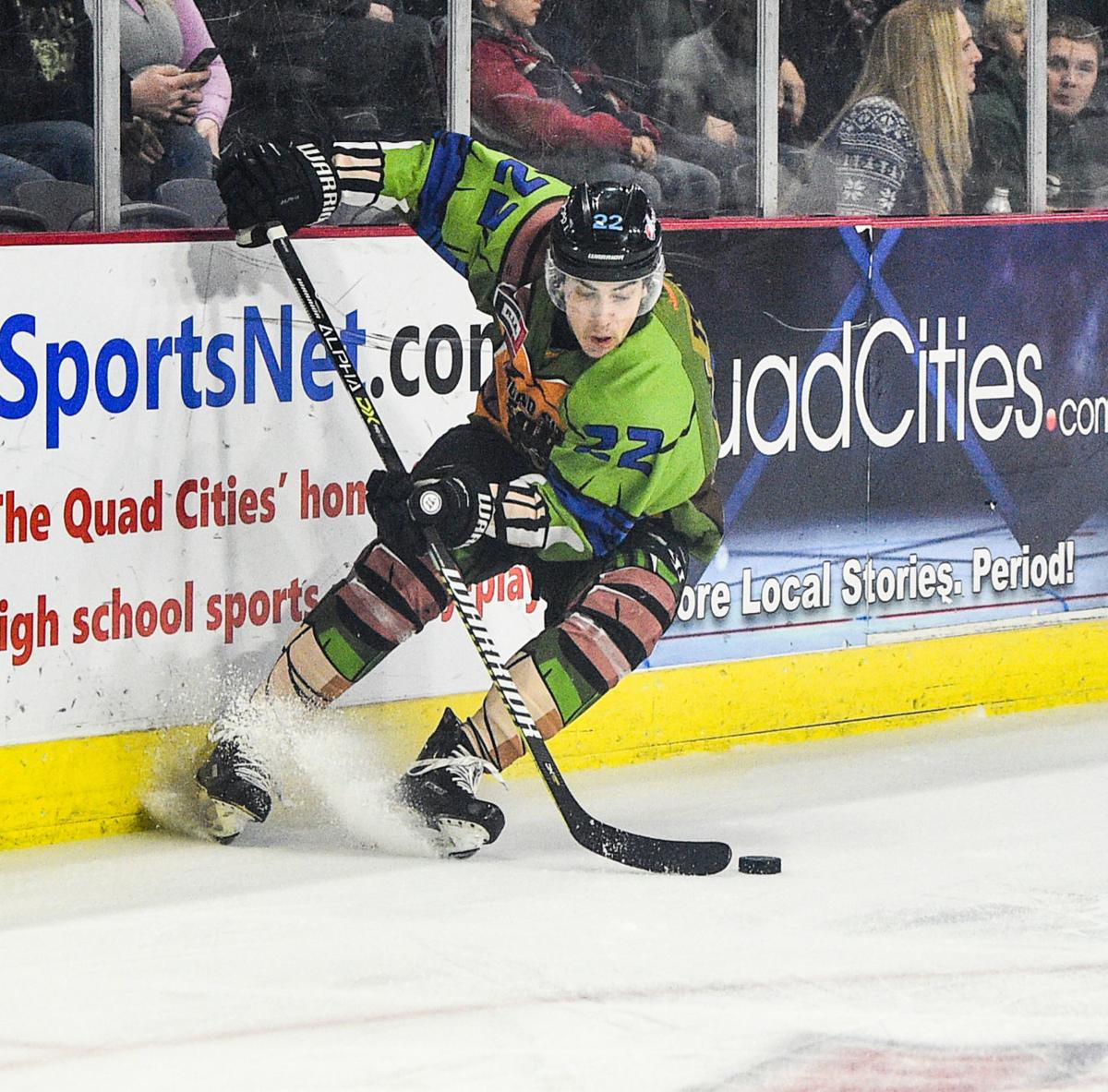 Quad-City Storm's Tommy Tsicos (22) gets control of the puck against Evansville during their game at the TaxSlayer Center Friday, Dec. 27, 2019, in Moline. 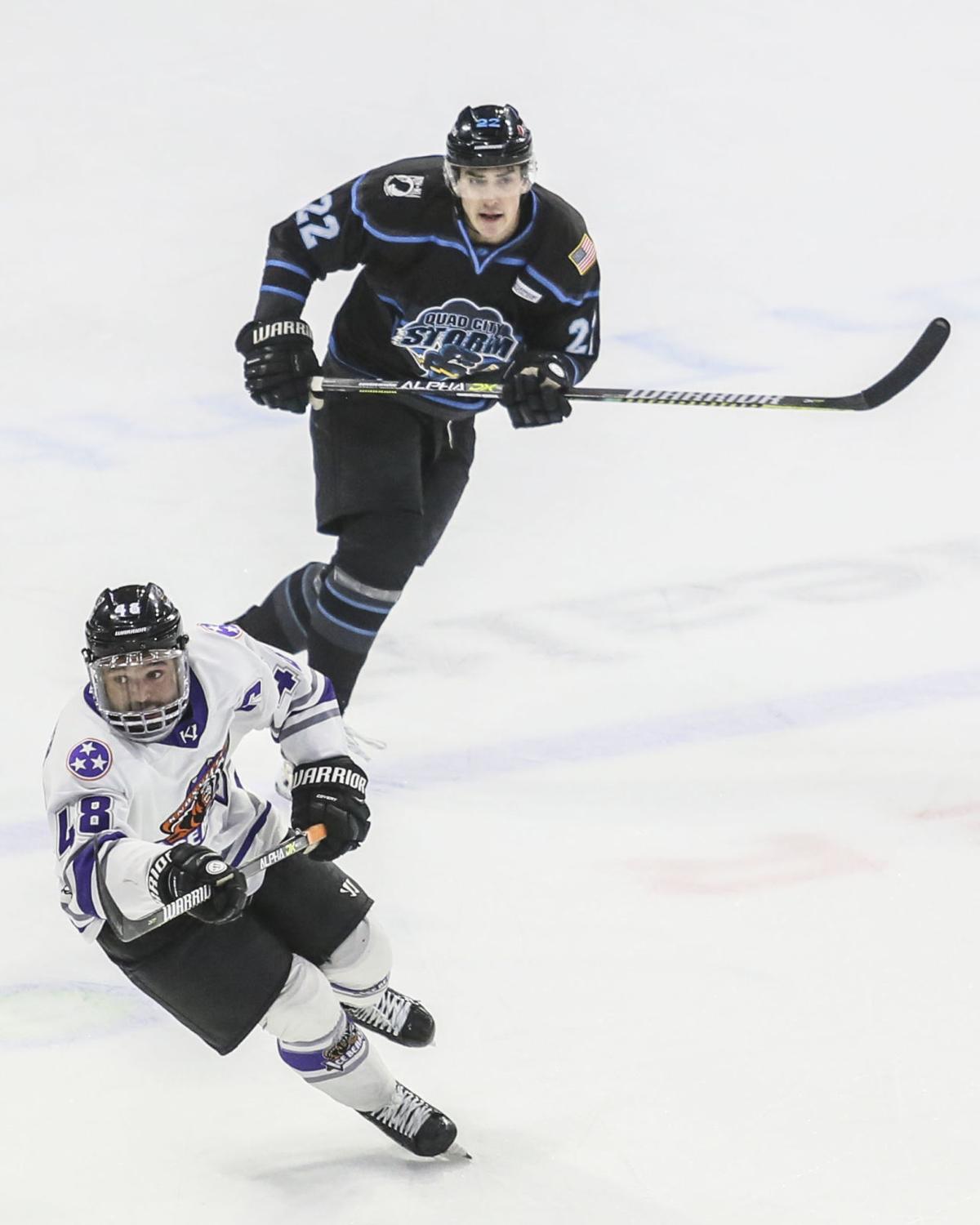 It really is a small hockey world.

Tommy Tsicos and Dave Pszenyczny have a connection that goes beyond the Quad City Storm. It goes back even further than when they played together as members of the Peoria Rivermen two seasons ago.

No, the first time the Storm forward and the Storm head coach crossed paths was back in 2006, when Tsicos was 13 and Pszenyczny was 20 and still playing junior hockey for Tsicos' hometown Barrie Colts of the Ontario Hockey League.

"Tommy, when we played together in Peoria, we were out having a few drinks and the next thing you know, he turns to me and was like, 'You know I used to watch you play?'" said Pszenyczny, now 34. "It makes me feel very old."

Pszenyczny started that season with Mississauga but was traded to Barrie at the midpoint. He quickly made an impression on Tsicos, not surprising as Pszenyczny put up 20 points in the 27 games he played with the Colts and an additional 14 in 14 playoff games.

"I definitely remember watching him play," Tsicos said. "That's not a last name you're going to forget. ... He was definitely a highly skilled offensive player back then. I was a little young to remember exactly how he played and pick up the little things, but playing with him in Peoria, I remember he was a competitor and he was probably the best defenseman in the whole league when he played. ... Very tough player to play against, too."

Now, Pszenyczny is coaching and Tsicos is in the midst of his second season with the Storm, showing his versatility as a player for the second-year franchise.

"As a player, if you can bring more than being one-dimensional, you can extend your career, you can play on any team, you can be a role player," Pszenyczny said. "I could probably tell Tommy to go play goalie and he'd do it as best as he could, and that just speaks about his character."

Following a college career at the University of Waterloo in Ontario, Tsicos bounced around his first year as a professional. He started his career with the Cornwall Nationals of the Federal Prospects Hockey League, then spent time with three SPHL teams, including a seven-game stint with Peoria.

He only had one assist in those seven games but made enough of an impression on Pszenyczny that when he was named head coach of the Storm, he made an effort to bring Tsicos aboard.

"You think about it sometimes, if I'd never played in Peoria and met Dave there, I'd never be playing for him here," Tsicos said. "But right away, you kind of know the difference between being teammates and now it's like a different type of relationship."

Tsicos began last season up in the ECHL with the Worcester Railers, playing four games and not joining the Storm until November. Once with the team, Tsicos had a strong year, scoring 12 goals and adding 15 assists in 50 games.

This year, he has four goals and nine assists in 32 games, and even though his numbers aren't quite as strong, he's doing plenty of little things to try and help the team. He's been key on face-offs, has been on the penalty kill and has been one of the more physical players on the team, with five fights on his card this season.

He's also picked his offensive game up lately, with six points in his last 12 games after a nine-game drought.

"I don't think he gives himself enough credit for how skilled he can be," Pszenyczny said. "I think he knows, first and foremost, his work ethic has to be there every day, and that's something I'll never take away from that guy. He's determined."

Tsicos doesn't mind the different role this year. He knows that if the little things can be infectious, the Storm should see more success as the season enters the final two months.

"Any time I play I just try to do what I can to help the team win and I know a lot of the little things I do, I try and worry about my face-offs and playing physical, bringing that to the team and usually the points will come when you're doing stuff like that," Tsicos said. "The main goal, especially when you're playing pro hockey, the main goal is to win. You need to do whatever you can to win, this is your job. You're getting paid and you need to buy into whatever role the team needs you to do. Any little thing you can do to help the team win, that's all that matters."

"When you're a kid, I remember looking up to those guys and it was really cool whenever you saw them come into the schools," Tsicos said. "Every time we go out in the community, it's good for our team, it's good for the community. It is good for building the connections as well because we're still kind of new so we're laying the groundwork for the future of this team."

The Quad-City Storm's Tommy Tsicos chases down the puck during a game earlier this season. Tsicos has specialized in doing the little things to help the Storm win.

Quad-City Storm's Tommy Tsicos (22) stands ready before the face off during their season opener against the Huntsville Havoc Friday, October 25, 2019, at the TaxSlayer Center in Moline.

Quad-City Storm's Tommy Tsicos (22) gets control of the puck against Evansville during their game at the TaxSlayer Center Friday, Dec. 27, 2019, in Moline.