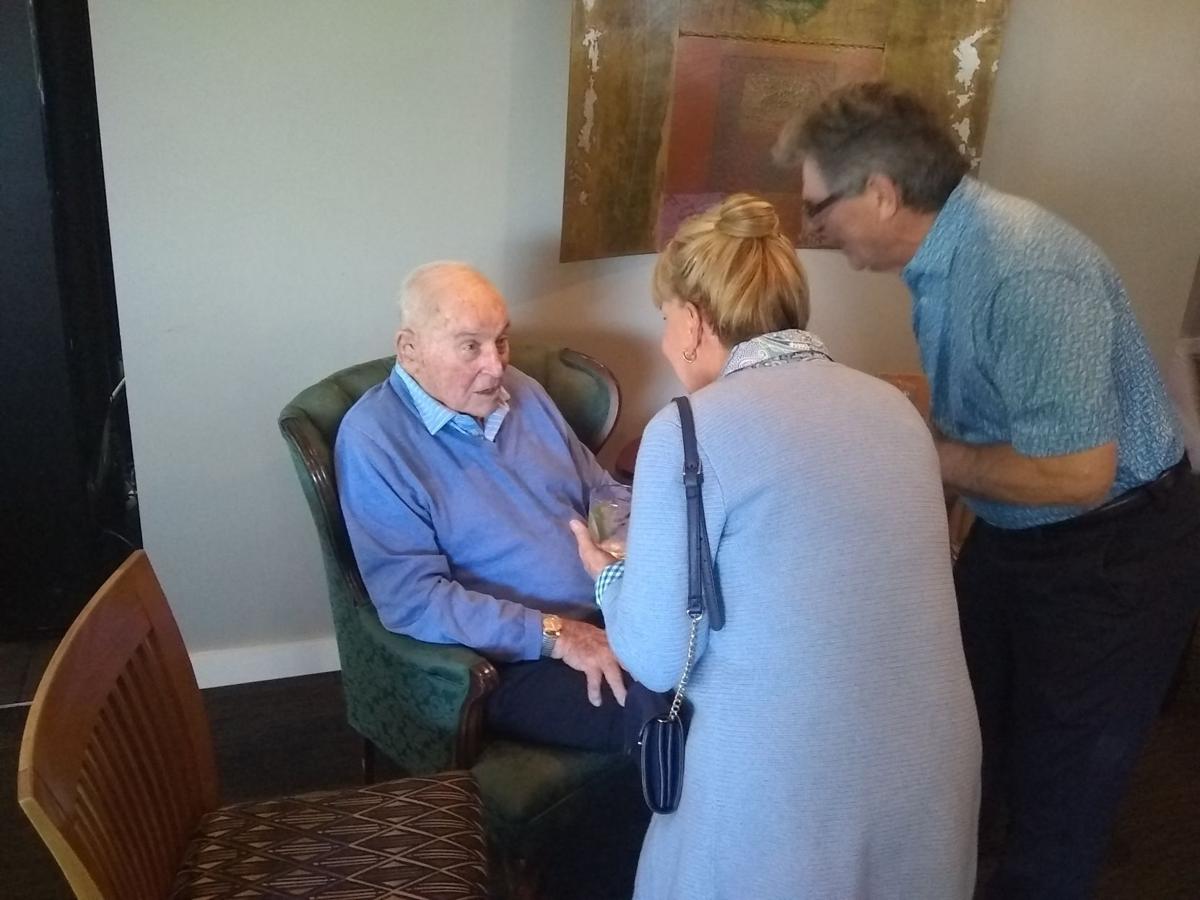 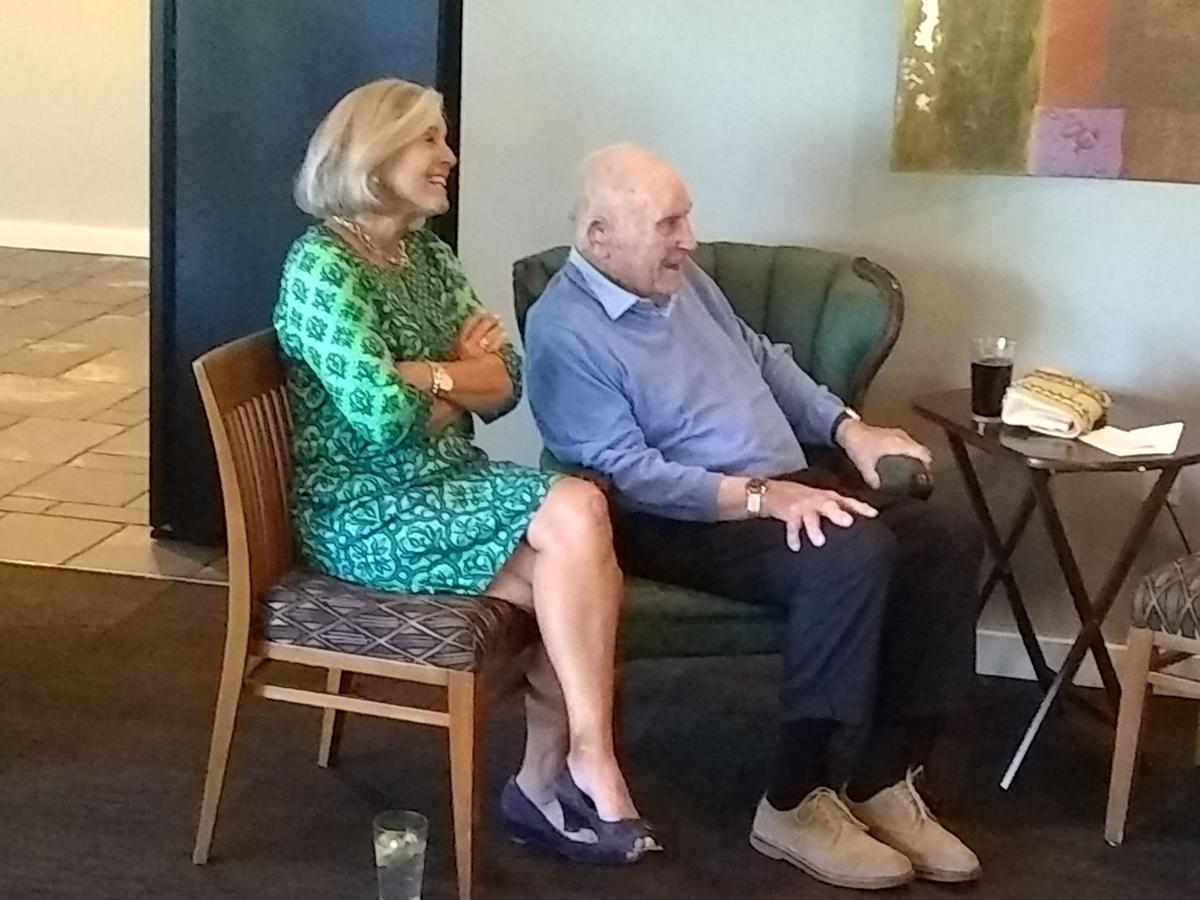 John Lujack and his daughter, Mary, listen as friends tell stories about him during an open house Thursday. 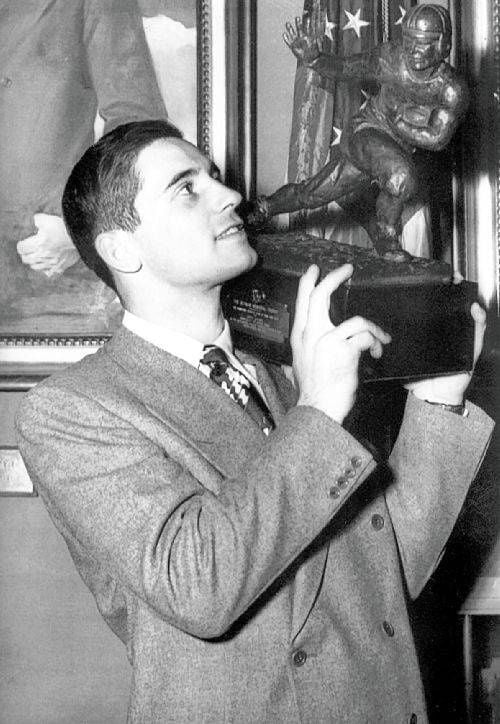 John Lujack hoists the Heisman Trophy at the 1947 ceremonies. 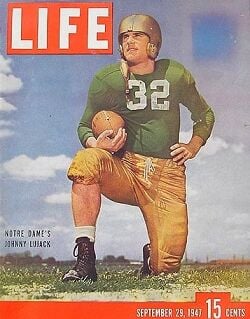 John Lujack long ago proved to the world that he’s very nearly indestructible.

He came out of tiny Connellsville, Pa., to letter in four sports at Notre Dame during the 1940s, performing well enough in one of those sports to win the Heisman Trophy in 1947.

He was equally adept at throwing touchdown passes as he was at making game-saving tackles on rampaging 220-pound fullbacks in the open field.

He did more of the same in four years with the Chicago Bears, setting records for passing yardage in a game and rushing touchdowns in a season while earning All-Pro honors on both offense and defense.

Very little has happened since then to alter the indestructible label.

In 2004, he drove his car into the side of a cement truck, suffering a broken back, several broken ribs and bruises and abrasions all over his body. After three days in intensive care and two weeks in the hospital, he climbed out of bed and flew home to the Quad-Cities for his grandson’s wedding.

In 2016, he underwent a five-hour surgery at the Mayo Clinic to repair damage done by spinal stenosis.

But as the 96-year-old Lujack sat in a chair at Crow Valley Country Club and greeted a seemingly endless line of well-wishers Thursday afternoon, you could still see glimmers of the old indestructible John.

The occasion was a send-off for Lujack, who is moving to Naples, Fla., after 67 years as a resident of the Quad-Cities, although the old warrior took offense at the use of that term.

Lujack’s daughter, Mary Pohlmann, said her dad isn’t quite back to full health after suffering a pair of strokes in May.

"But he’s on tonight, though," she warned.

As an athlete, Lujack always was known as someone who could — and usually would — rise to the occasion, and he did it again Thursday.

As Mary took a microphone and made a short speech to explain the significance of the gathering, John interjected.

"I would just like to say how great it is to be alive and to see all of my friends that I haven’t seen in a long time," he said, making his voice clearly heard without the aid of amplification. "I appreciate you all coming out and stuff.

"I know there’s a free meal, but pretend like you’re glad to see me."

Obviously, 96 years haven’t done anything to dull his sense of humor.

Lujack’s great-grandson, Charlie Flanagan, took the microphone and emotionally explained how John had turned to him at one point this past summer and whispered "I consider you a friend."

"That was one of the biggest accomplishments of my life having him as a friend," Flanagan added.

Lujack was ready with another quip.

Many others shared tales of encounters with Lujack on the golf course, many of them taking place at Crow Valley, a facility he helped to get started 50 years ago. In every story, Lujack was depicted as having a snarling, needling, competitive nature that masked a heart of gold.

When one of the speakers referred to Lujack as "a living legend," he jumped into the conversation again, saying: "Wait a minute, can you repeat that?"

He is moving to Naples to be close to his grandson, Grant Pohlmann, after living in the Quad-Cities for roughly two-thirds of his life. Following his career at Notre Dame and four years with the Bears, he dabbled briefly in coaching and broadcasting, then settled in Davenport, the hometown of his wife, Patricia.

He went into the car sales business with his father-in-law, Frank Schierbrock, and quickly developed the largest, most successful Chevrolet dealership in the state of Iowa. He sold the business to his son-in-law in 1986 but has remained a leading figure in the community, one its great benefactors as well as one of its most noteworthy celebrities.

For the past few decades, he has split time between Bettendorf and Indian Wells, Calif., but now plans to relocate to Florida permanently. Patricia, who he married in 1948, went into a care facility in California last year and she also will be moved to Naples.

"He told me he’s so looking forward to being able to hug her again," Mary said.

As all the well-wishers took their turns chatting with Lujack on Thursday, he remained seated and continuously apologized for not getting up.

"I’m doing pretty good but my legs aren’t working too well," he admitted.

But his spirit and his humor clearly never have been stronger.

"Cheers to all of you for showing up tonight," he told the crowd. "It’s good to see you all get out."

To spend more time with his young family, Cory Wachal made the decision recently to step down as North's baseball coach.

Portland State at Iowa at a glance

A capsule look at Friday's game between Iowa and Portland State.

Western Michigan at Iowa at a glance

While not official until genetic testing confirms it, the conditional new state record shovelnose sturgeon was caught last week on the Rock Ri…

John Lujack and his daughter, Mary, listen as friends tell stories about him during an open house Thursday.

John Lujack hoists the Heisman Trophy at the 1947 ceremonies.