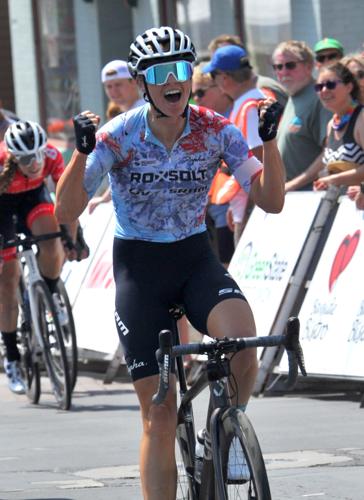 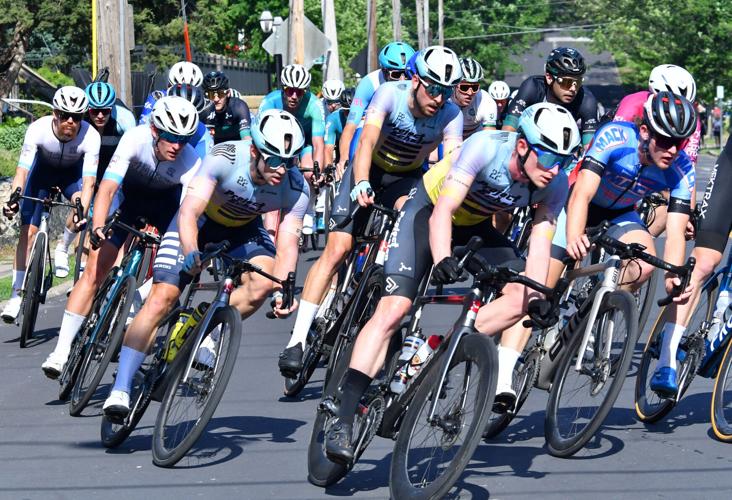 Racers keep it tight as they make the turn from 12th street to Mound Street during the Kwik Star Criterium, the annual cycling race Monday through the streets of Davenport in the East Village. 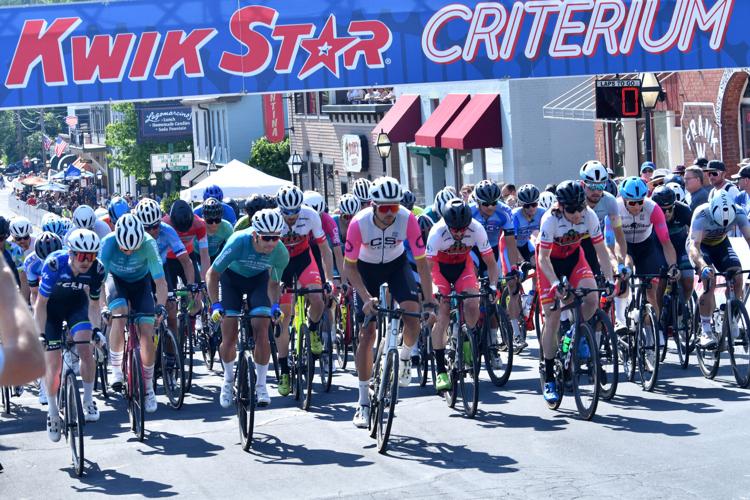 Racers in the Ford Pro Men take off from the starting line in the Kwik Star Criterium, the annual cycling race Monday through the streets of Davenport in the East Village.

Peta Mullens landed on American soil about 48 hours before the Memorial Day Weekend series that features criterium stops in Burlington, Muscatine and the East Village of Davenport.

“I was fighting a little bit of jet lag and trying to find a little bit of confidence,” the 34-year-old cyclist from Victoria, Australia said. “I haven’t raced a criterium in three years.”

Well, Mullens had no trouble climbing her way to the top Monday.

In her first trip to the 55th annual Kwik Star Criterium, Mullens collected her second victory in as many days, out-sprinting Rylee McMullan and Arielle Coy to the finish line in the 40-minute Kimberly Crest Vet Pro Women's race.

“The last two days, the courses have been really good and I’ve gotten to know other girls I’m racing against,” she said. “I’ve been able to play off their weaknesses and take some wins.”

Drew Dillman, of Fairdale, Ky., capped off the most successful weekend of his professional career with a victory in the men’s Pro/Category 1/2 race. Dillman won the Snake Alley Criterium on Saturday in Burlington, but crashed on the final lap of the Melon City Criterium in Muscatine on Sunday.

“You go from the highest of highs to the lowest of lows,” Dillman said. “It was disappointing, but luckily I wasn’t injured. I was definitely eager to get out there and see what else I had. I felt like my legs were good even though I was a little banged up.”

The Kwik Star Criterium returned to the streets of East Davenport after the event was canceled the past two years because of the COVID-19 pandemic.

Spectators lined East 11th Street and Fulton Avenue to watch and cheer on cyclists as they navigated the hills in 90-degree temperatures.

“It seemed like every lap I was out there by myself, the crowd got louder and louder,” Dillman said. “It was loud when we hit two laps to go. When I hit the final lap, the decibel level was twice as loud.

“That definitely gives you a few more watts when you’ve reached pain cave.”

Mullens resides in Australia, but she’s in the United States competing in 20 criteriums over the next 30 days.

She was runner-up in Burlington, won in Muscatine and added a second victory on Monday.

Mullens, who said she hasn’t traveled outside of Australia the past couple of years because of COVID, had heard about the iconic Snake Alley course in Burlington.

“I like to visit different parts of the country, but I haven’t spent much time in Iowa,” she said. “It is a beautiful area and I loved it.”

This was the steepest challenge of the four days, she said.

“The hills aren’t maybe the hardest, but they are in quick succession and you don’t have a lot of recovery time,” she said. “Plus, it is the fourth day and the legs are a little bit tired.”

Mullens admits she doesn’t have the speed, confidence or even the nerve she did several years ago, but she maneuvered the last two corners well on the final lap to fend off the field.

“Peta is definitely the smartest biker racer in the group,” McMullan said.

McMullan, also making her first appearance here, has earned a podium finish (top three) in every race this season. She just hasn’t broken through with a win.

“I’m pleased with how things are progressing, but it has been really frustrating not to get that win,” she said. “At least, I’m consistent.”

Dillman won the battle of attrition in the men’s race that lasted 70 minutes.

His Texas Roadhouse Cycling team had three in the top nine while Aaron Beebe and Cade Bickmore also were in the lead at some point during the race. Beebe finished 16th and Bickmore did not finish.

It was the first time Dillman had raced here since 2014, just after he got into the Category 1/2 Division.

"I did mountain bike stuff for a couple of years and that didn’t go well,” he said. “I got back to the road and it is proving to be a good choice.”

Dillman was nearly all alone in the lead for about five laps of the race. With about a 13-second advantage going into the last lap, it pretty much turned into a victory lap. He high-fived fans as he came up the final straightaway to the finish line.

“You’re so deep in pain cave for five laps and the whole time I had no idea if it was going to work,” Dillman said. “There was every bit of doubt in my mind if they’re going to catch me or I’m going to hold on. I’m looking back, but not trying to look back too much to stay committed to the move.

“Once it gets to two or three laps left, you have to be committed. If you’re not, they’re going to catch you and you’re going to get spit out.”

Teammate Kyle Perry of Indianapolis took second and Sam Morris of West Vancouver was third. Matt Zimmer of DeWitt was the top local in 13th place.

The other winners on the men’s side were Trevor Holowaty of Warrenville, Ill. (Category 4), Davenport’s Benjamin Lloyd (Category 5), Randy Reichardt of Des Moines (Masters 40-plus) and Daniel Casper of St. Paul, Minn. (Masters 50-plus).

Photos: Kwik Star Criterium on Memorial Day in the Village of East Davenport

Here is a look at the softball statistical leaders in the Iowa Quad-Cities metro and area. Numbers are what has been posted to Varsity Bound by 1:30 p.m. Tuesday.

Three takeaways from Day 2 of the Justin Sharp Shootout

The Justin Sharp Shootout is complete. Read for the three biggest takeaways surrounding local squads for the 2022-23 season.

Here is a look at the baseball statistical leaders in the Iowa Quad-Cities metro and area. Numbers are what has been posted to Varsity Bound as of 11:30 p.m. Tuesday.

Now slated two weeks behind the U.S. Open and two weeks ahead of the Open Championship, it appears as if a number of more prominent players are choosing to go play the PGA Tour-sponsored Scottish Open the week ahead of the British Open and use the John Deere Classic week as a travel/off week.

Three storylines from Day 1 of the Justin Sharp Shootout

Day one of the Justin Sharp Shootout is complete. Read for the three biggest storylines impacting local squads before the 2022-23 season.

JOHN DEERE CLASSIC: Harman out, Hadwin in as field set for next week's PGA Tour event

The final field is set for next week's John Deere Classic and there were minimal changes in the 156-man lineup for the PGA Tour at TPC Deere Run.

The Hawkeyes' consensus All-American was selected by the Sacramento Kings with the fourth pick in the opening round of the NBA draft, the highest draft pick ever for an Iowa player.

Moline's Owen Freeman has already made a big impact for the Maroons before the season has even begun. Read how the all-state transfer has excelled offensively and built chemistry with his new team this summer.

Racers keep it tight as they make the turn from 12th street to Mound Street during the Kwik Star Criterium, the annual cycling race Monday through the streets of Davenport in the East Village.

Racers in the Ford Pro Men take off from the starting line in the Kwik Star Criterium, the annual cycling race Monday through the streets of Davenport in the East Village.