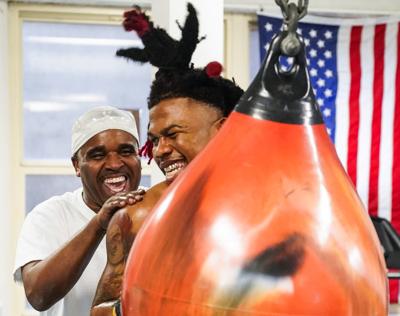 Pachino Hill goes through the list slowly in a controlled, even-toned voice. There doesn’t seem to be any more emotion there than if he was telling you what he ate for lunch.

There was a close childhood friend who was shot and killed on the streets of Davenport in 2015. A beloved cousin passed away in 2016.

A few more friends died as a result of gun violence in the years after that. There were two more friends who died earlier this year.

In August of last year, one of Hill’s closest friends, Jeramie Shorter, was shot and killed while attending his son’s funeral.

That’s where the emotions that Hill so staunchly suppresses begin to trickle out.

"He was like a big brother to me," Hill said of Shorter.

Like a lot of other young men in troubled communities such as Davenport, Hill is trying to rise above some perilous circumstances.

He’s trying to do it through boxing.

The 24-year-old super middleweight is 5-0 as a professional following a technical knockout of Jarvis Williams on June 19 at the Davenport RiverCenter.

He is likely to fight again in Davenport in August and could step up to a higher profile, televised fight in November, but that is all yet to be determined.

"He’s just going to keep rolling," said Brandon Bea, who functions as Hill’s manager but actually heads a team of people who oversee the boxer’s training.

"If he stays focused the way his mind is right now, I think he can go far," Shorter said.

Hill already has overcome a great deal in his life.

His father, Bryan Mitchell, was convicted of murder in 2004 and is serving a life sentence at the Anamosa State Penitentiary.

His uncle and namesake, Pachino T. Hill, was one of the more notorious criminals in the history of the Quad-Cities. He was arrested 29 times before finally being put away on charges vehicular homicide and cocaine trafficking in 2009. He resides in Bruceton Mills Federal Penitentiary in Hazelton, W.V.

Pachino B. Hill admits that he was no angel himself as a youth.

And although he is determined to break what he calls the "generational curve" and change the perceptions connected to his name, he hasn’t managed to stay entirely off police blotters himself.

He was arrested last summer for his alleged role in a May 30 riot in downtown Davenport in the wake of the Minneapolis slaying of George Floyd.

Hill was charged with second-degree criminal mischief, conspiracy to commit a non-forcible felony, assault causing bodily injury and participating in a riot. A plea offer has been made but the case has yet to be resolved.

Of the handful of people involved in the incident, Hill was the only one who turned himself in to authorities, and you can detect the remorse in his voice when he recalls what occurred.

Hill suffered an even bigger blow later in the summer when the son of his coach was killed in a highly unusual incident.

Jeramie Shorter’s 8-year-old son, Jermier, had died after a lifelong battle with cancer and he was at the visitation at Weerts Funeral Home in Davenport when Shorter was shot and killed during an altercation in the parking lot.

Hill, who grew up across the street from Shorter, said the incident totally altered his outlook on life.

"It woke me up," he said. "There were nights where I would Google to see if something like that happened before, someone getting killed at their kid’s funeral. I couldn’t find anything like that.

"It scarred me really," he added. "It also made me open my eyes. I had to start appreciating stuff more. Today I’m still trying to wrap my head around why."

Prior to that, Hill wasn’t really taking boxing that seriously as a career. Shorter’s death changed that.

"It was like my getaway until Jeramie got killed," Hill said. "Jeramie was in here with me when I was learning all this stuff, really learning how to box and how to get good at it.

"Basically, every step of the way he was there. Through my losses and my wins, he was there. So when he died, I couldn’t run away. Every day I’m in here I can think of memories of him being in here with me. I can’t use this as a getaway because he was part of that getaway with me. I said I’ve just got to face this. So now I have to appreciate life more."

"It changed him up a little bit," Shorter said. "It hit him kind of hard."

Hill always has been a good athlete.

He was a two-year letterman in both basketball and football at Davenport Central and as a senior in 2014-15, he was a first-team all-metro running back, accumulating 1,380 all-purpose yards for the Blue Devils.

That earned him a chance to play football at a junior college in Miami, but he tore his Achilles tendon in a workout the summer before his freshman season.

While he was recovering, he spent some time watching his cousin, Cederick Thomas, box. Cederick and his father, Fred, one of the coaches for the Davenport Pena Boxing Club, had been trying to coax Hill into boxing for some time, and he finally gave it a try.

Within the first two years, he won two Iowa Golden Gloves championships and qualified for the national tournament in 2017.

He turned pro early last year and hasn’t really been challenged yet. Four of his five fights have ended with knockouts.

Hill felt the Williams fight was an important step for him. He named the fight "Built for it" because it was his first chance to prove himself against someone with a quality record.

Although he won the fight, he still showed some immaturity after Williams poked him in the face and tried to provoke him during the pre-fight weigh-in.

"I think that got the fans riled up and it kind of got out of control with fans running around," Bea said.

By the time, the two fighters stepped into the ring, things had reached a fever pitch.

"He could have boxed the guy and got him out of there probably in the second round, but he really fought," Bea said. "It was a fight instead of a boxing match. The thing about Chino is his IQ is off the scale so you didn’t have to tell him afterwards his mistakes in the fight. He pointed them out and he said he needs to grow from it."

After the Williams fight, Hill posted on Facebook that he doesn’t know if he’s ready yet for the next level. He knew he let Williams get under his skin and into his head.

"I definitely think he’s ready for the next level but I just told him he needs to look to his corner because we were telling him to box and use his skills," Bea said. "He was just in the mindset of getting the guy out of there, which he did end up doing."

"He’s going to go far," Shorter added, "because he knows you can’t just talk. You’ve got to back it up."

Shorter said he also wants to see Hill become a mentor to the younger fighters he comes across in the gym.

Hill has begun to do that. He also wants to do everything he can to make his family proud.

He has young daughter in Davenport named Kàlahni and also a 6-year-old son named Cashmere back in Florida.

In fact, he said his distinctive hairstyle with protruding dreadlocks tinted red are a tribute to Cashmere, who he calls Simba. He calls it his "Florida hairstyle."

He smiles as he says it, then quickly turns somber again as he realizes so many of the people he wants to make proud are no longer here to see what he plans to do in boxing.

"I took a lot of losses so I have to appreciate everything I’ve got," Hill said. "All the losses I took started to make me appreciate life a lot more."

Even though it was basically billed as a warm-up for the post-season, Monday night’s non-conference volleyball battle between Moline and Rock …

Bettendorf senior Bradley Hill has decided to continue his wrestling career at the University of Iowa.

Time is right for Timm to shine at Augie

Augustana College football coach Steve Bell has a birds-eye view of the Lindberg Stadium playing field, and the coach liked what he saw on the…

Moline wrestling standout Kole Brower announced his commitment to Illinois on Friday. But before he leaves, he still has a lot he wants to accomplish in high school.

When you are a standout in your chosen profession or avocation and you are successful, the rewards will follow. 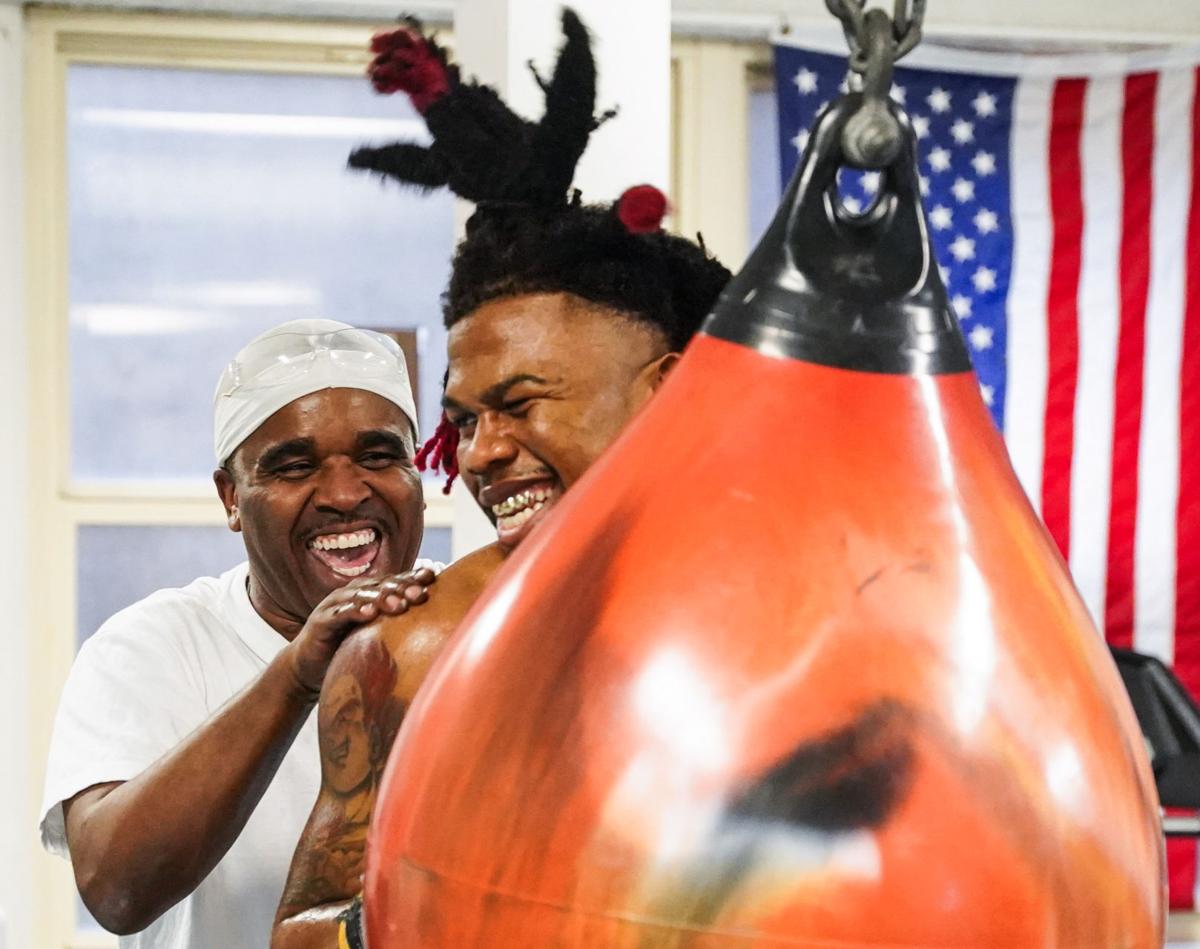 Boxing coach Jamie Shorter helps Pachino Hill warm up before sparring at Pena's Boxing Club in Davenport on April 29. Hill came back to the Quad-Cities after an injury in college and asked Shorter to start training him in 2015. Shorter and Hill became close after the passing of Shorter's son, Jeramie Shorter, who died from gun violence. Hill says he fights to honor the memory of Jeramie Shorter. 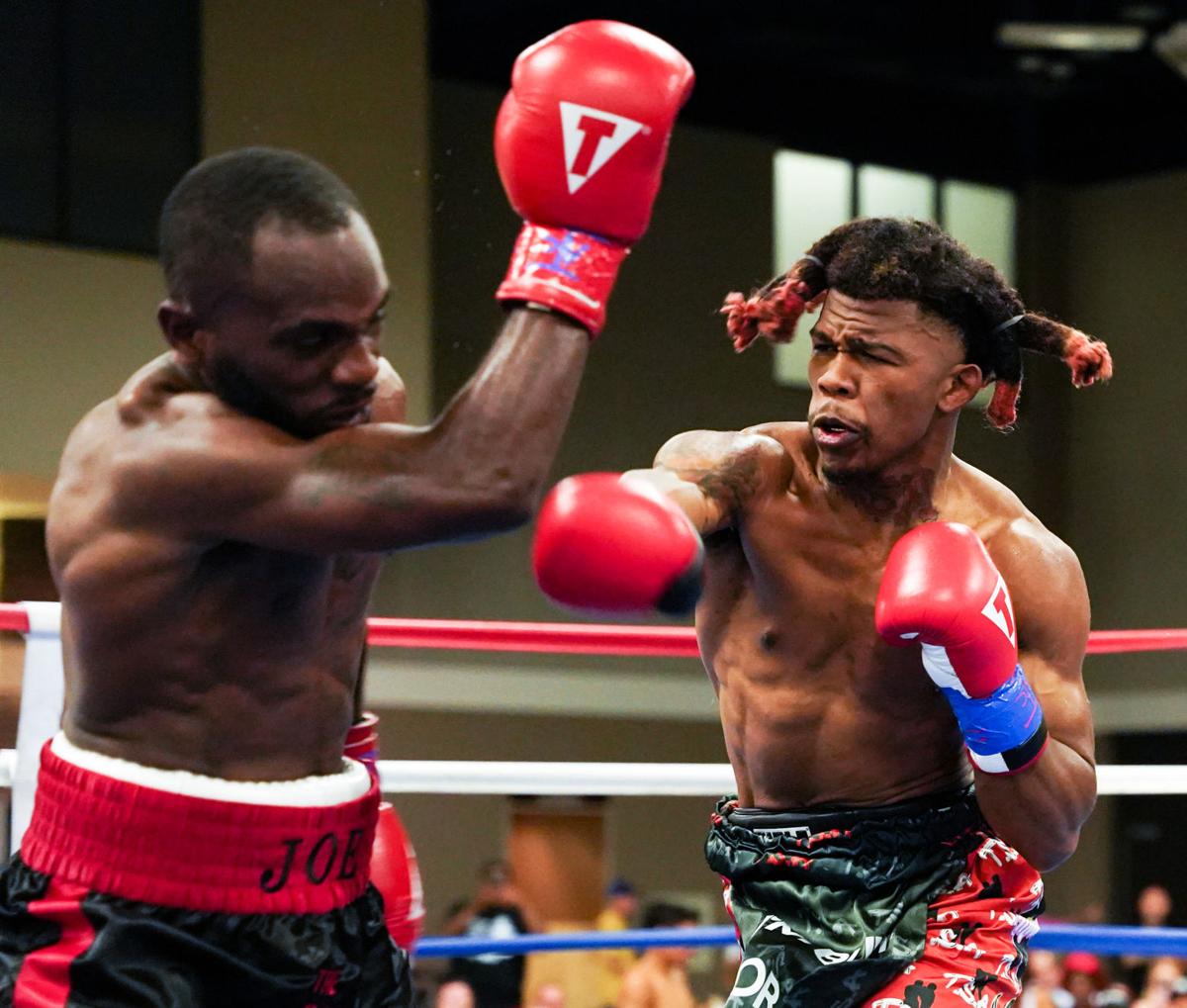 Pachino Hill lands a punch on Jarvis Williams of St Louis during their match at the River Center in Davenport June 19. 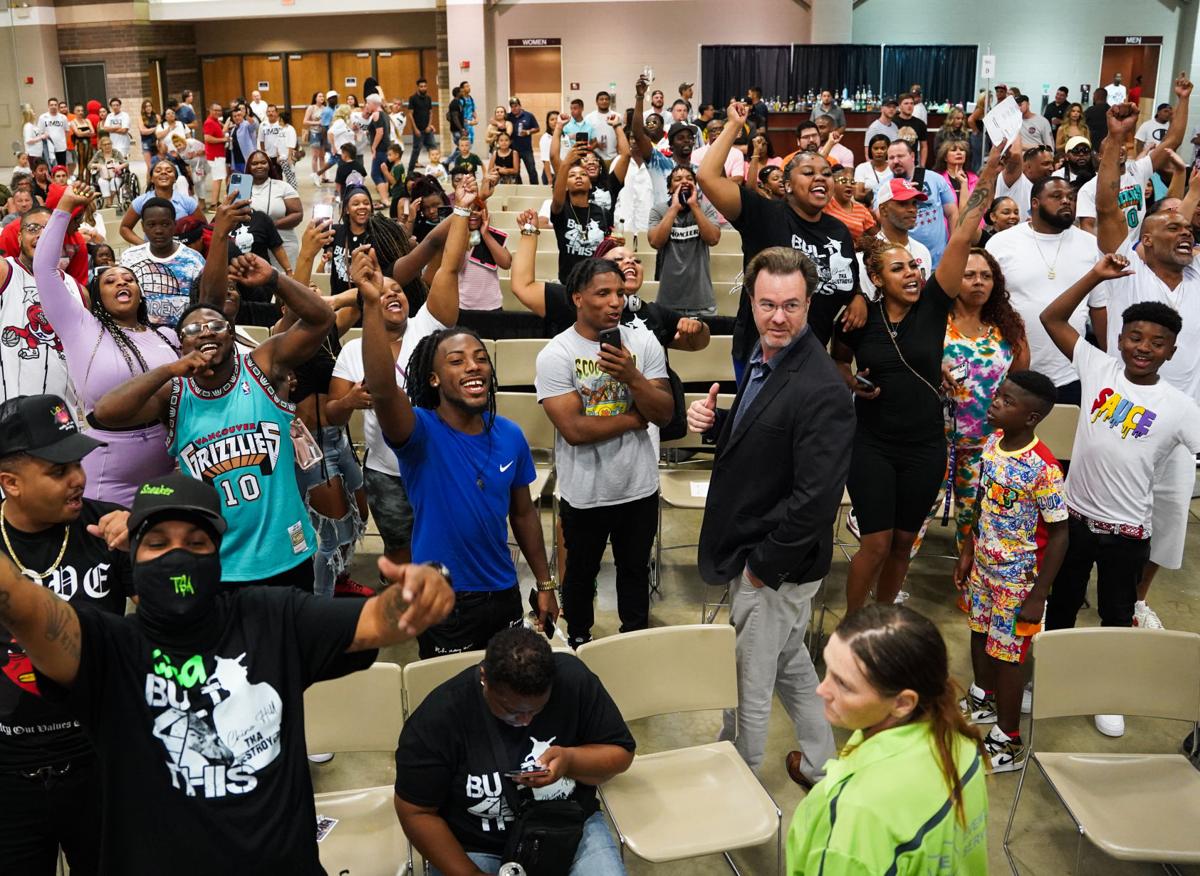 Pachino Hill's fans cheer him on as he battles it out with Jarvis Williams of St. Louis during their match at the River Center in Davenport on June 19. 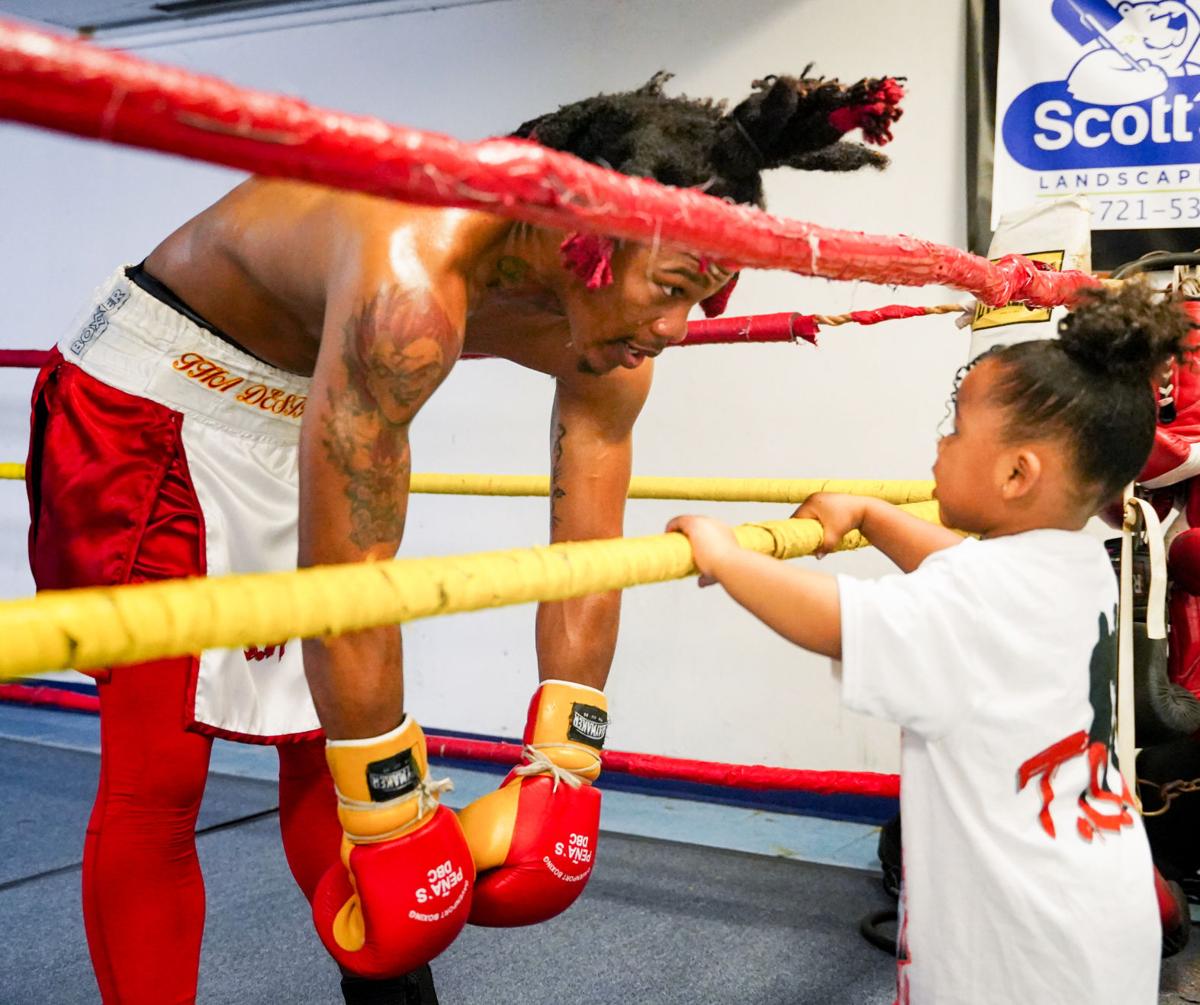 Pachino Hill talks with his daughter Kàlahni Hill after sparring at Pena's Boxing Club in Davenport on April 29.