Beat the Elite runner receives medical attention, but fine after being passed on final stretch
0 Comments
Share this
1 of 5 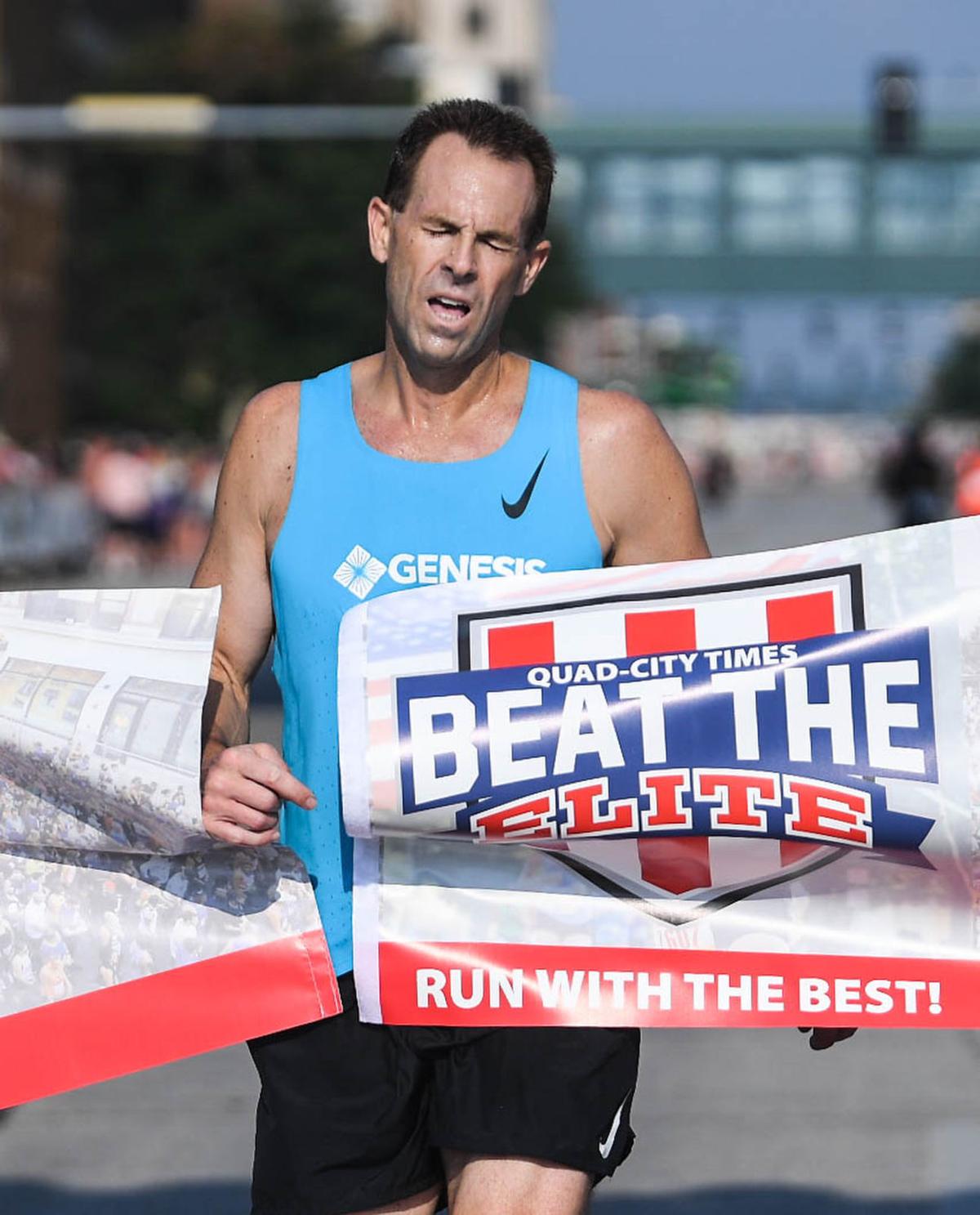 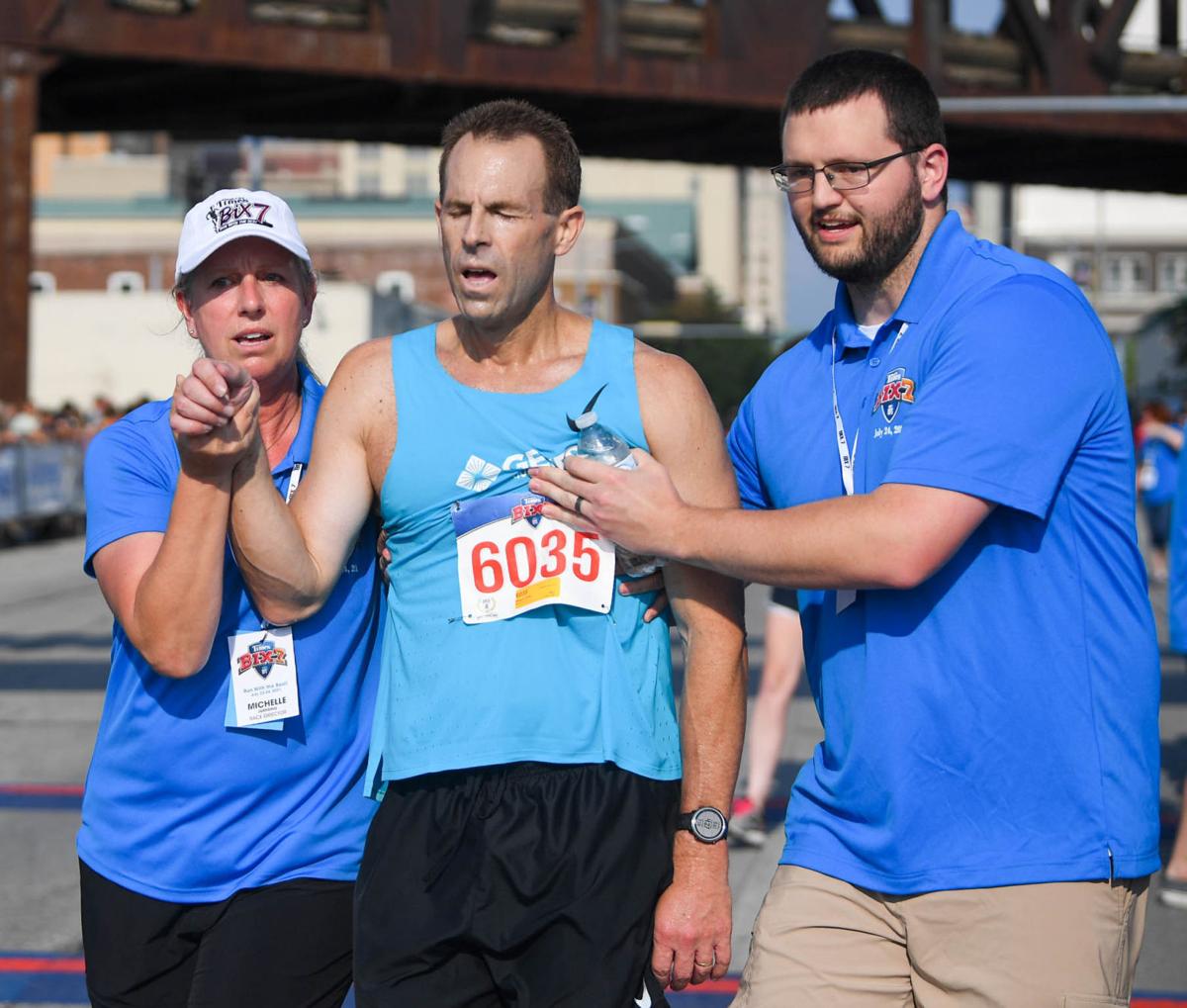 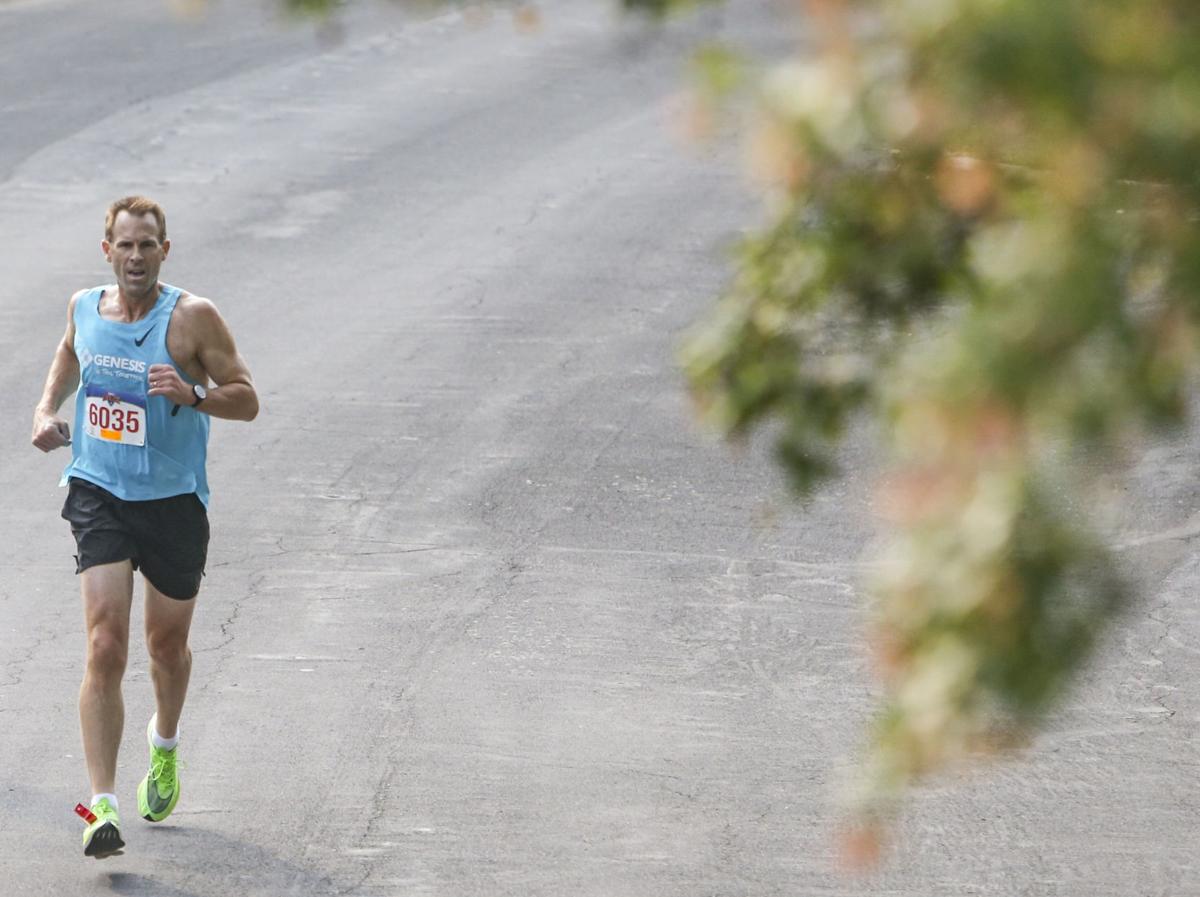 Beat the Elite runner Doug Boleyn of Bettendorf goes through the Village of East Davenport, Saturday during the 47th annual Quad-City Times Bix 7. 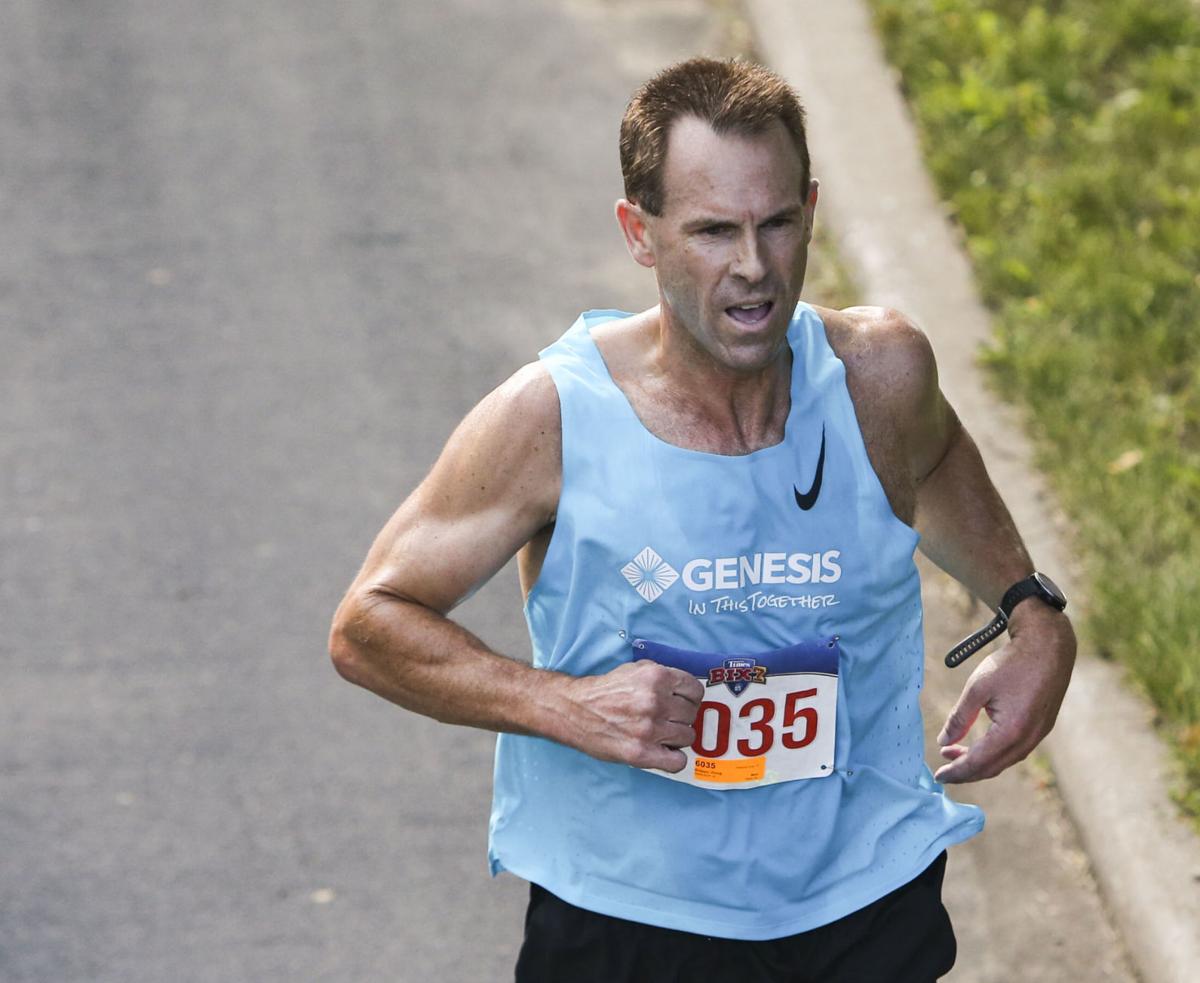 Beat the Elite runner Doug Boleyn of Bettendorf runs through the Village of East Davenport, Saturday during the 47th annual Quad-City Times Bix 7. 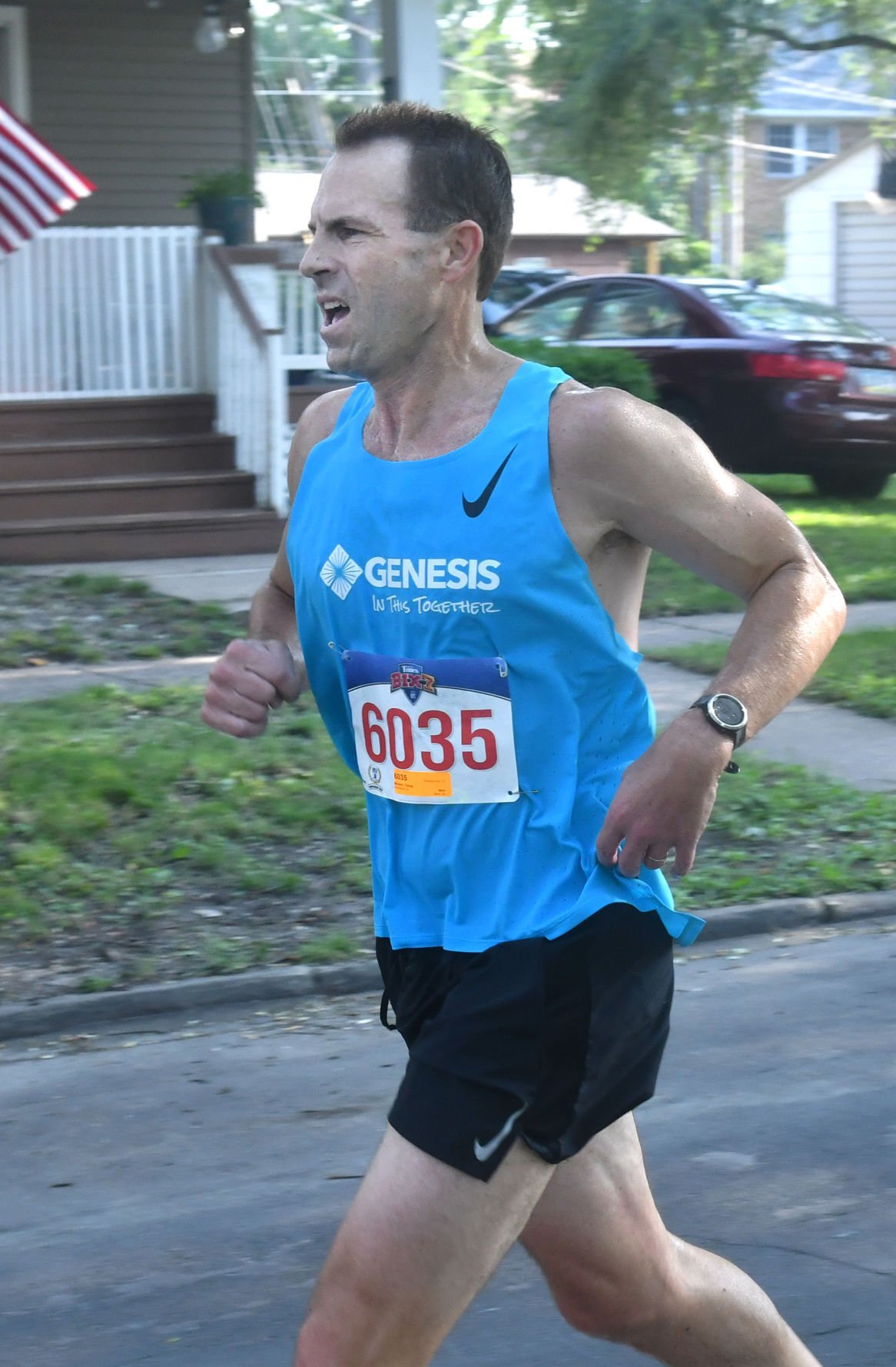 Doug Boleyn wasn't planning to push himself, but the competitor in him took over too early.

Boleyn, this year's Quad-City Times Beat the Elite runner, was passed by the elite pack just after making the turn from Brady Street onto 3rd Street, and after crossing the finish line, had to be taken to the Genesis Medical Tent, where he received treatment for approximately 30 minutes.

"Unfortunately, I wasn't looking at my watch and I went out way, way too fast," Boleyn said. "My target was to come through the 4-mile mark at 11 minutes and I came through at about slightly under 9 minutes so I was running a little over a 6-minute pace which is way too fast ... then I just died after that.

With a race-time temperature of 78 degrees and 82% humidity, the heat got to many people, including Boleyn's daughter, Grace, who won the high school challenge but also had to visit the medical tent.

Both were up and about in time for the 10 a.m. post-race party.

"I know my daughter and she didn't necessarily treat this as a race. Even though she won the challenge, she wasn't racing this, she was treating this as a workout," Boleyn said of his daughter, who is an incoming freshman at Pleasant Valley. "But I knew she would end up in the tent because I knew the conditions were bad. So as I was in the tent, I was looking and I was asking people. ... Sure enough, they wheeled her over. It's just the way she is, it's just how she's wired."

As innovation officer for Genesis Health System, Boleyn already knew they'd be in good hands in the tent, which is staffed by Genesis health care workers, but to see them up close and in action was something else entirely.

"I wanted to leave, and they're smart," he said. "They're kind, they're compassionate, they do all the right things, I just felt like both my daughter and myself, we were in really, really good hands and I'm just so appreciative of them coming down on such a warm day and devoting all their time."

Doug Boleyn received a 2.45-mile head start along the course, but as the race progressed, that lead dwindled. He made the turn from Kirkwood Boulevard back onto Brady Street at the 25-minute mark, just three minutes ahead of the elite pack. As soon as he turned onto 3rd Street, he was passed by Leonard Korir and Frank Lara, who battled down to the finish line before Korir edged out the win.

"When I hit Brady, I knew I wasn't in good shape," Boleyn said. "I knew they were only four blocks behind me and I knew we had six blocks to go and I thought they were going to catch me because running down that hill, they're going to run like a 4-minute pace and I figured I'm in trouble and sure enough they caught me.

"Those guys run fast. These conditions are absolutely awful. ... I just couldn't run that fast today."

Boleyn is the third Beat the Elite runner to need medical attention in the last six years. But even with that, there isn't a concern about the future of the promotion.

Though he didn't win the $2,500 — which he was planning to donate — and though he ended up in the medical tent, Boleyn didn't have any regrets.

"It was a great experience, regardless of the money, and I just really enjoyed it," Boleyn said. "The race was incredibly difficult, grueling but the whole experience was wonderful and I'm just excited to be back and be part of the Bix again."

Doug Boleyn, this year's Quad-City Times Beat the Elite runner, has worked with The Lab, Powered by Genesis Sports Medicine, as part of his training for Saturday's challenge, part of the Quad-City Times Bix 7.

Beat the Elite runner Doug Boleyn of Bettendorf goes through the Village of East Davenport, Saturday during the 47th annual Quad-City Times Bix 7.

Beat the Elite runner Doug Boleyn of Bettendorf runs through the Village of East Davenport, Saturday during the 47th annual Quad-City Times Bix 7.