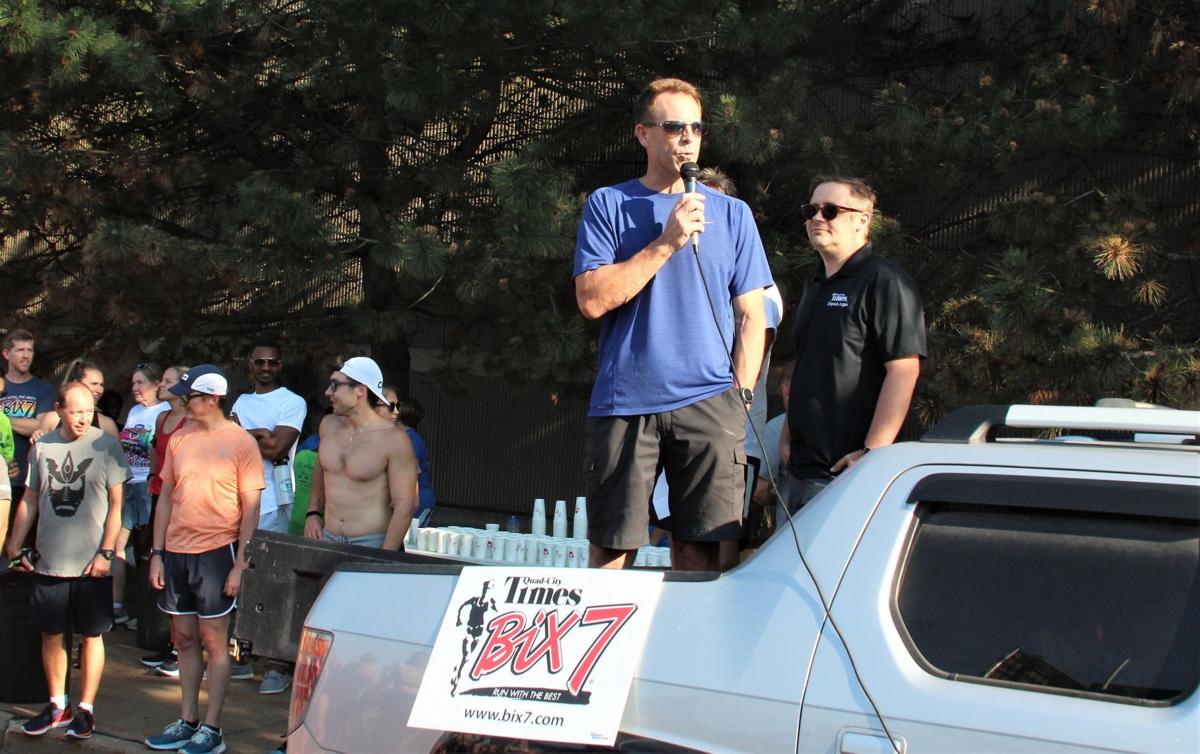 Doug Boleyn, the Beat the Elite runner for the 47th running of the Quad-City Times Bix 7, addresses the runners at Thursday's Iowa American Water Bix at 6 training run. 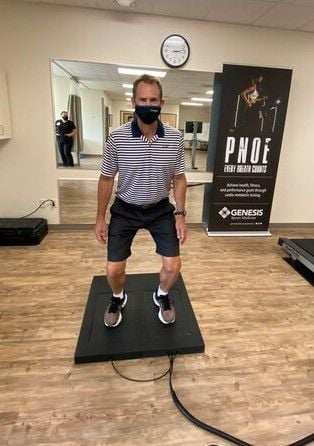 As innovation officer for Genesis Health System, it's no surprise Doug Boleyn is looking for new ways to gain an advantage.

Boleyn, this year's Quad-City Times Beat the Elite runner, has worked with The Lab, Powered by Genesis Sports Medicine, as part of his training for Saturday's challenge.

Boleyn will get a 2.45-mile head start along the 7-mile Quad-City Times Bix 7 course. If he is the first person to cross the finish line, beating the elite pack, he will win $2,500.

The starting point is on Kirkwood Boulevard, just prior to entering the Village of East Davenport.

"He was excited," race director Michelle Juehring said. "He is a competitor, and he had his pace per mile time for the last three years and factored in COVID, factored in his age and felt like this was fair and competitive."

Boleyn, 52, has been an avid runner for 40 years, running in junior high and high school and for two years at the University of Northern Iowa. He continues to run now, but after he was named as the Beat the Elite challenger four weeks ago, he wanted to find ways to help improve his chances of beating the elites, who have the ability to post mile averages of 4 minutes, 30 seconds.

Based on those times, Boleyn feels he'll need a mile pace of 7:10 to win.

"I think it's going to be close, I think it will be really, really close," Boleyn said. "The idea for it is to be challenging and to be close. I think if all things go right, I think I'm capable of running that pace."

While at The Lab, Boleyn worked with medical director Dr. Jose Armendariz and staff, undergoing a series of tests to identify strength imbalances, movement mechanics and blood flow restriction.

"We've been able to bring some technology to The Lab that I'm not aware of," Boleyn said. "Some of the technology we have is used pretty much exclusively in Europe with some of the professional soccer teams, particularly our motion metrics running analyzer."

The motion metrics running analyzer is a treadmill hooked up to 3D cameras and motion sensors in order to break down someone's running mechanics and provide feedback on how to run more efficiently.

In Boleyn's case, the analyzer showed him to be too upright in his running stance and that he was landing on his heels too much.

Though he's only been working on correcting his stride for the past four weeks and recognizes how difficult it is to make significant changes in that amount of time, Boleyn still feels like he's seen some improvement.

Two of the last five Beat the Elite challengers have collapsed either at or near the finish line. A heat advisory has been issued for Saturday afternoon, though the race time temperature is expected to be 79 degrees. Even with the potential heat and humidity, Boleyn isn't too worried.

"I've run a lot and I'm at an advantage where I'm only running 4.6 miles," he said. "I'm not going to push myself that hard to where I collapse so I'm not worried about that. ... It is what it is. We run in the summer all year long in the Quad-Cities, so it's a warm day but there's been warmer days and there have been more humid days so it's still, in the grand scheme of things, it's not like running down in Florida in July and August."

If he wins, Boleyn plans to donate half of the winnings to the Genesis Pediatric Therapy Center and the other half to the Pleasant Valley girls track team. His daughter, Grace, is an incoming freshman at PV.

"I've been involved with the therapy clinics for a long time," said Boleyn, whose son, Nathan just graduated from Pleasant Valley. "They do great things with the kids there. ... I just thought it was a really nice opportunity to highlight that program and give a little bit back."

A little more than a month ago, there was uncertainty about race specifics — including the Beat the Elite challenge — as the Quad-Cities came out of the pandemic, which had included some race restrictions that have since been lifted.

To have every event back this year as the Quad-City Times Bix 7 comes out of a virtual running last year means a lot to Juehring in her second year as race director.

"It's almost to the point where we can exhale," Juehring said. "It feels like, this is how it should be."

Past champ out of Bix

Sam Chelanga, the 2017 winner of the Quad-City Times Bix 7, is the latest elite runner to withdraw from the 47th edition of the annual race through the streets of Davenport.

Chelanga, who won the Peachtree Road Race 10k in Atlanta on July 4, has appendicitis.

The Bix 7 is scheduled for Saturday at 8 a.m. in downtown Davenport.

Now a fixture on race day, it wouldn't be the Quad-City Times Bix 7 without someone trying to beat the elites.

Beat the Elite runner receives medical attention, but fine after being passed on final stretch

Doug Boleyn, this year's Quad-City Times Beat the Elite runner, was passed by the elite pack just after making the turn from Brady Street onto 3rd Street.

Doug Boleyn, the Beat the Elite runner for the 47th running of the Quad-City Times Bix 7, addresses the runners at Thursday's Iowa American Water Bix at 6 training run.