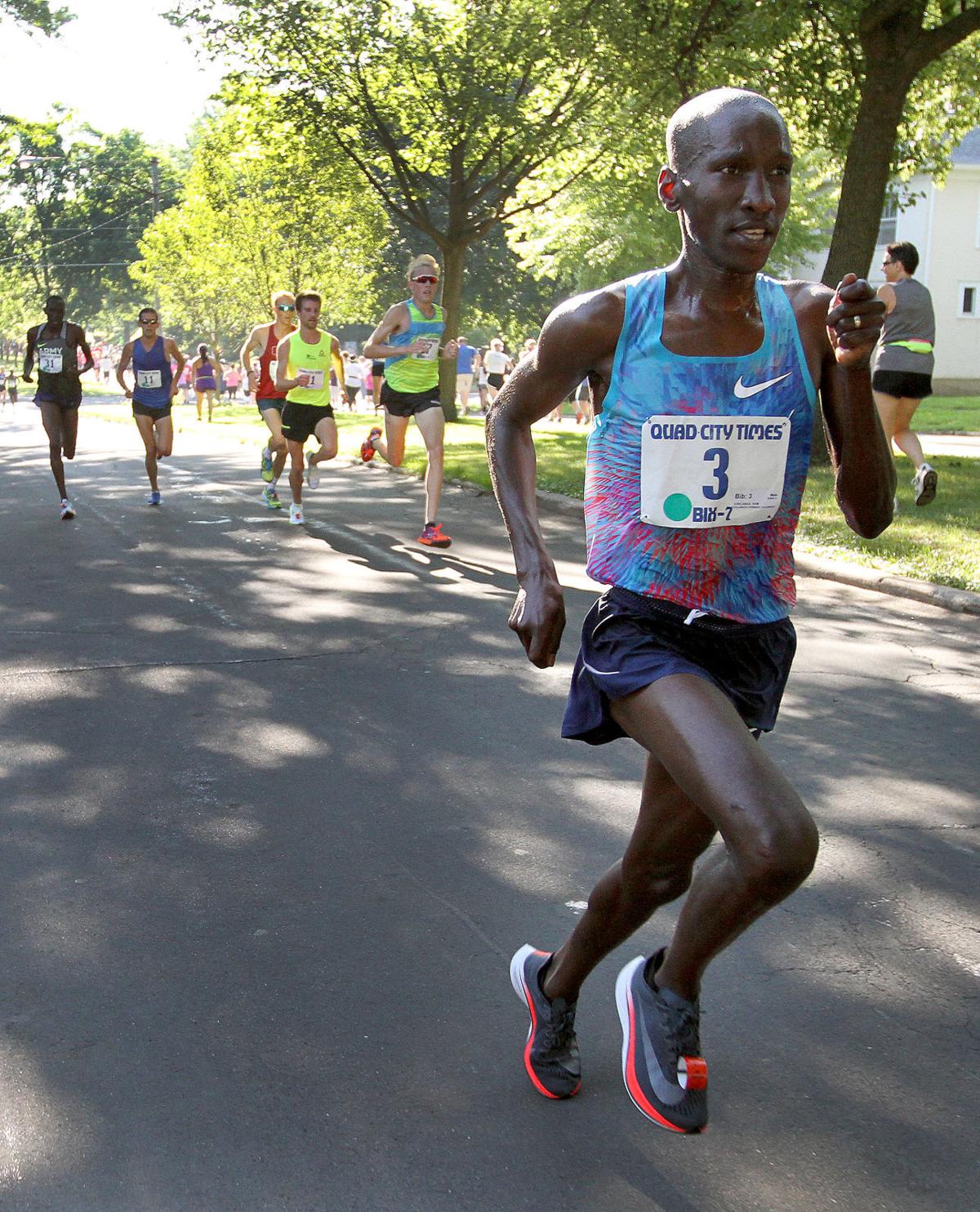 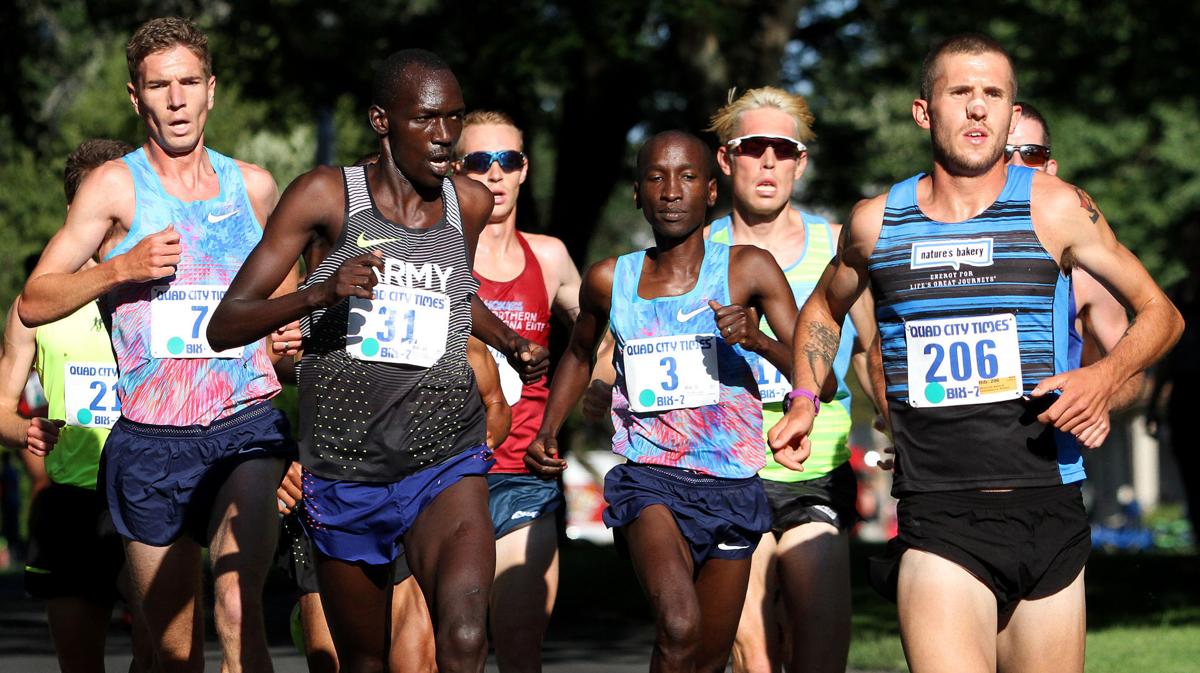 Runner Haron Lagat (31) looks over at leader Wade Meddles (206) and eventual winner Sam Chelanga (3) as they run down on Kirkwood Boulevard. 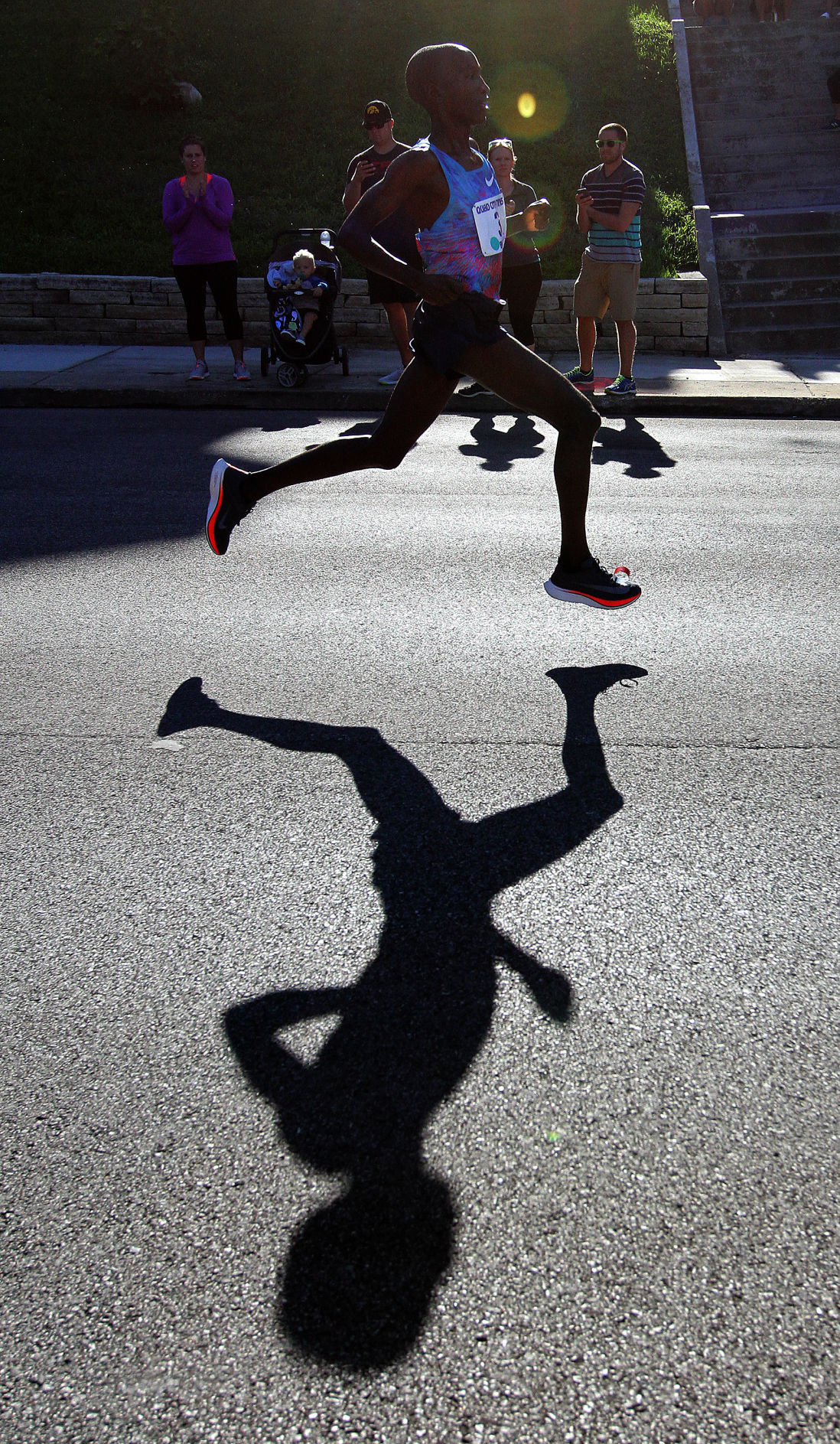 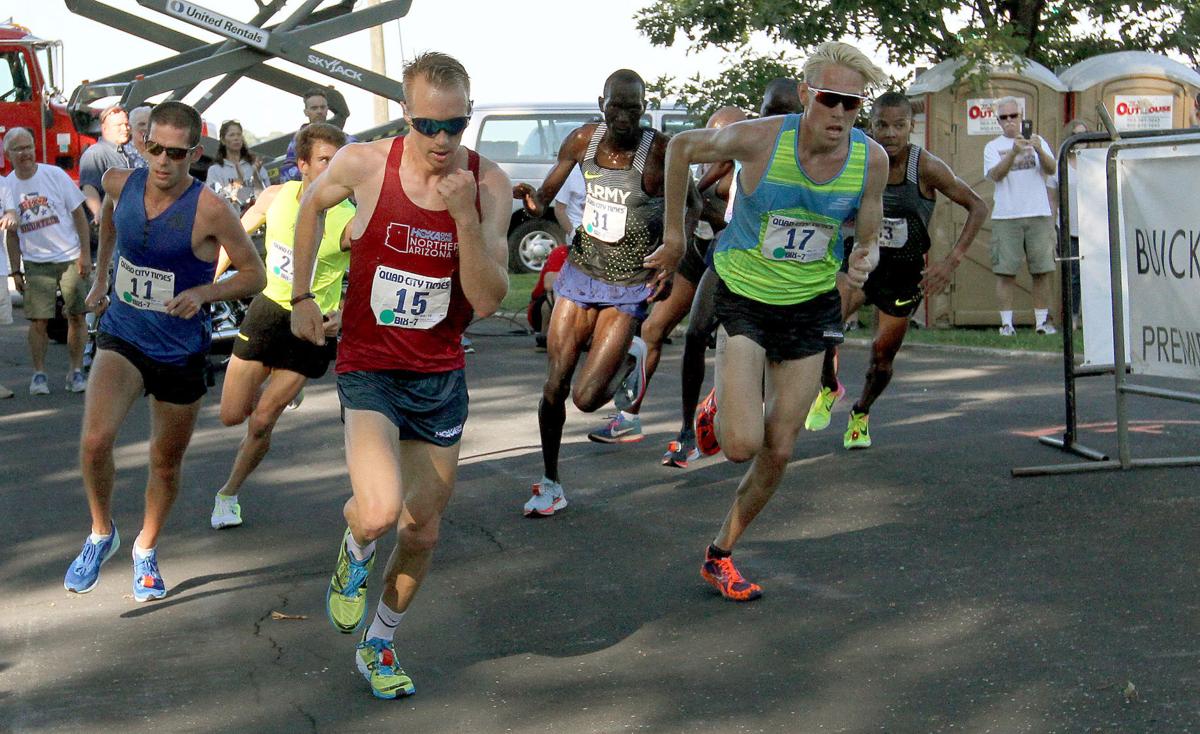 Sam Chelanga knew he was going to make a big, bold move at some point. He just didn’t plan on doing it when he did. He wanted to hold back a little longer.

The fans lined up along Kirkwood Boulevard just wouldn’t let him.

Chelanga broke away from a tight pack at about the 5-mile mark Saturday and sprinted away from all of his competitors to claim an easy victory in the 43rd annual Quad-City Times Bix 7.

Chelanga, a 32-year-old Kenya native who now lives in Manitou Springs, Colorado, and is a U.S. citizen, earned the $12,500 first prize in the U.S. championship race for 7 miles. His winning time of 32 minutes, 53 seconds ties for the 10th best time ever recorded by an American in the race.

The former NCAA champion at Liberty University said he got some advice from his training partner, two-time Bix 7 champion Leonard Korir, about running the race, but he didn’t necessarily follow the script exactly.

“I didn’t want to wait until the downhill because everybody can run downhill. I just decided to make a commitment for the last two miles and then bring it home.’’

Chelanga, who had not won a major U.S. race this year despite being third in the U.S.A. Track and Field road racing standings, told one reporter Friday that he didn’t think anyone really enjoyed running hilly courses.

He admitted Saturday with a grin that maybe at least one of the runners in the Bix 7 did.

“I train in Colorado Springs and I’m a little light, so I love hills,’’ he confessed. “It’s just like the hardest thing brings the best out of you. I think that’s why I respect the hills.’’

For much of the race, there was a very large pack of runners grouped together at the front. It’s normal for two or three runners to form the lead pack in the Bix 7. This time, there was six or seven.

Jonathan Grey of Louisville, Colorado, was in front for much of the first half of the race, but he was joined by Chelanga, Reid Buchanan, Scott Fauble, Haron Lagat and Matt McClintock. Another runner, Emmanuel Bor, eventually joined that group, too.

Lagat, a 34-year-old Kenya native best known for his exploits in the steeplechase, stepped to the front of the pack in the fourth mile.

Then Chelanga found another gear. Within seconds, on the gradual uphill along Kirkwood, he built a huge lead.

“I’ve been one of the guys who has been racing him all year on the road circuit so I knew he was going to do that,’’ Grey said. “He did it at Peachtree with a mile to go. Peachtree is a 10k so at five miles, with a mile to go, he’s gone.’’

“Sam’s been doing that all year,’’ Fauble added. “I wanted to go with him, but I just didn’t have the legs at the time.’’

McClintock, a former Big Ten cross country champion at Purdue, also was not surprised Chelanga made the move, but he was a bit stunned at how abruptly he separated.

“It was a lot harder move than I anticipated,’’ he said. “It was a good move by him. It really put any thoughts of chasing him out of anyone’s mind really.’’

Grey said Chelanga’s teammates, Korir and Shadrack Hoff, normally make the big move with him but neither of them was in the Bix field. There was no one to stay with him this time.

“It’s not like I’m going to go with him,’’ Grey said. “So that’s when the next group of three of us all packed up and said this is going to determine the rest of the race.’’

Fauble, who lives and trains in Flagstaff, Arizona, ended up finishing second with McClintock third and Grey fourth.

Fauble said he wasn’t feeling very good until Chelanga took off but he said that actually helped him because it ceased to be a tactical race.

“There still was a good chunk of us who were chasing Sam so I just committed to running as hard as I could to the last turn and then hoping I could hold on for that last straightaway,’’ he said. “I didn’t want to leave it to a kick with some of these faster guys.’’

McClintock, just a year removed from the college ranks, was especially happy to finish as high as he did.

“It was a great way to end my first year of running post-collegiately,’’ he said. “I was very excited.

“I really enjoy the roads,’’ he added. “I wasn’t sure when I first came out last fall what it was going to be like. You get used to track and cross country so much but I’ve fallen in love with the roads.’’

Did you survive the Bix? Check out our start-to-finish coverage of the Quad-City Times Bix 7 featuring stories, photos and videos from around …

View hundreds of photos from the Bix 7, Jr. Bix. Spot anyone you know?

For those that can't get enough Bix. Here's a time lapse video of runners coming up and going down Brady Street Hill.

Runner Haron Lagat (31) looks over at leader Wade Meddles (206) and eventual winner Sam Chelanga (3) as they run down on Kirkwood Boulevard.