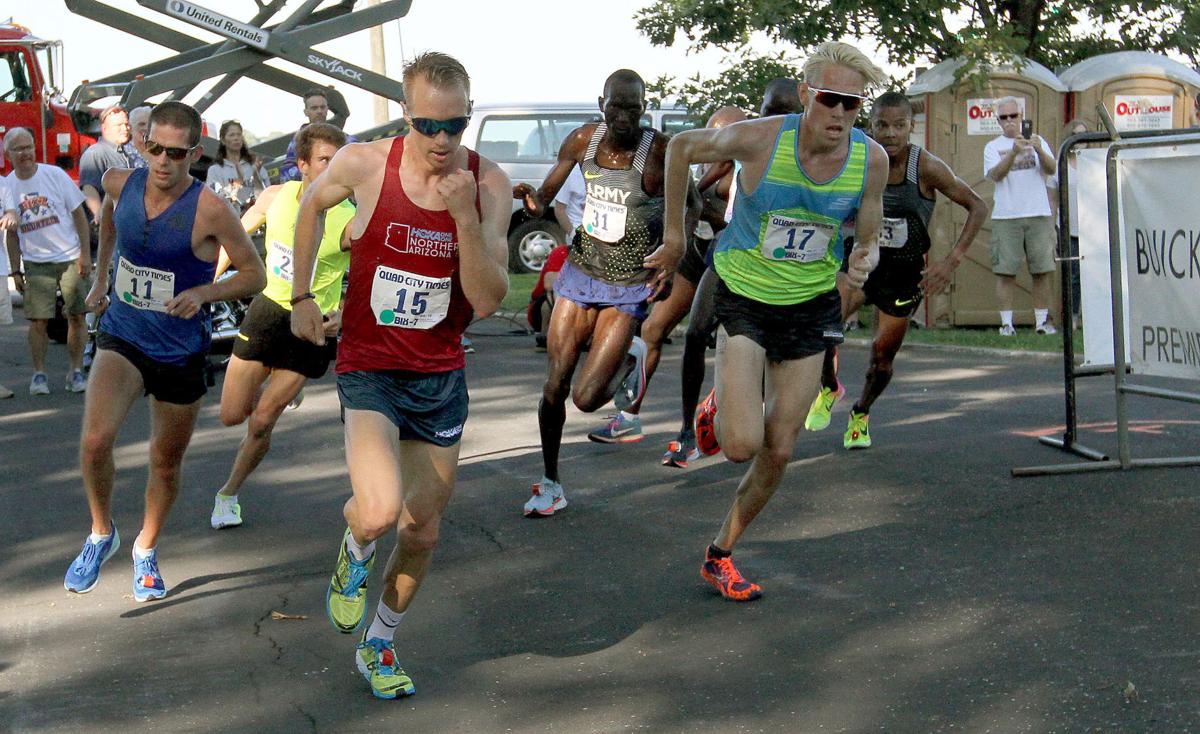 Scott Fauble (15) leads a pack that includes Jonathan Grey (11) and Reid Buchanan (17) at the McClellan Boulevard turnaround halfway through the 2017 Quad-City Times Bix 7. 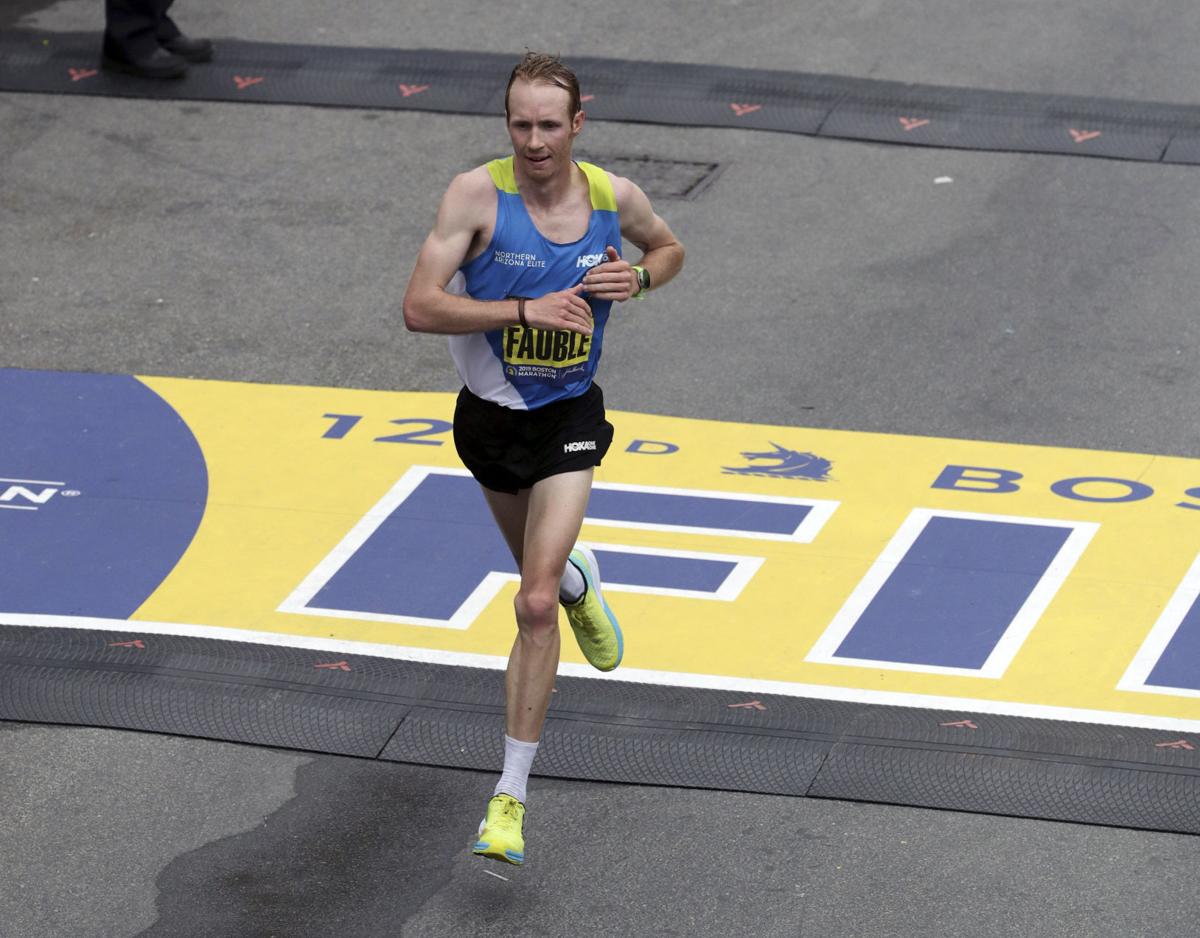 Scott Fauble crosses the finish line as the top American in the 2019 Boston Marathon. 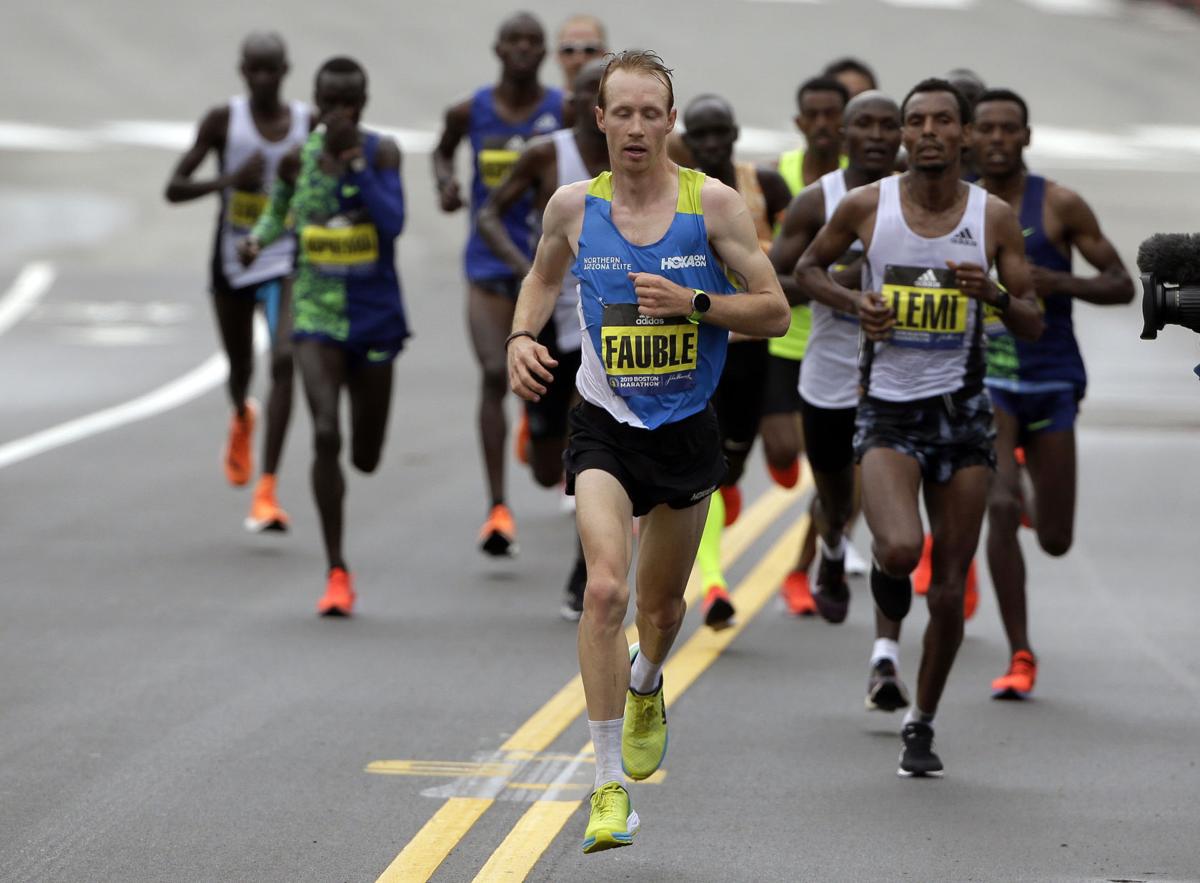 Scott Fauble, of Flagstaff, Ariz., leads the pack during the 2019 Boston Marathon in Newton, Mass.

Scott Fauble will be in the Quad-Cities to run in a little 7-mile race this weekend, but he admitted his preferred distance is a bit longer than that.

Fauble views himself as a marathoner.

In fact, he may be the only runner in the field for the 47th Quad-City Times Bix 7 who actually has written a book about the subject.

Fauble and his coach, Ben Rosario, co-authored "Inside a Marathon: An All-Access Pass to a Top-10 Finish at NYC," a 336-page book that they self-published in 2018 and was re-released by Amazon last year.

It details his preparation for the 2018 New York City Marathon, where Fauble recorded a seventh-place finish.

Although Fauble did a great deal of writing at the University of Portland and Rosario actually was a journalism major in college, he admits it was "a lot of work.

"I was a couple years out of college and I was ready to flex my mental muscles again and I had this idea so I just kind of ran with it."

The 29-year-old Fauble, who lives and trains in the running hotbed of Flagstaff, Ariz., has been a major factor on the U.S. running scene since he placed fourth in the U.S. Olympic Trials 10,000 meters in 2016.

At that time, he was just six years removed from having won two Colorado high school cross country championships, followed by a standout career at Portland.

In the years since then, he has assembled a long list of achievements, including a second-place finish in the 2017 Bix 7.

In addition to his top-10 placing at New York in 2018, he also was the top American finisher (seventh overall) in the 2019 Boston Marathon and was fourth in the Marathon Project in Chandler, Ariz., last December.

He missed out on his bid to make the 2021 Olympics when he finished a disappointing 12th in the marathon trials.

He did not attempt to make the team this time in the 10,000, which was won by Woody Kincaid, his old Portland teammate and good friend. Kincaid also made the U.S. team in the 5,000 meters, and Fauble’s high school classmate, Annie Kunz, is headed for Tokyo in the women’s heptathlon.

"I’m really happy for the two of them," Fauble said. "My Olympic effort is disappointing, of course, but it doesn’t take away any of the pride and the happiness I have for them."

0:35 The drum line from United Township High School in East Moline is playing at the turnaround point for the 2019 #bix7

Fauble will settle instead for a shot at winning the Bix 7 on Saturday. The field includes three runners who finished ahead of him in the Olympic marathon trials — Leonard Korir, Augustus Maiyo and Colin Bennie — along with Sam Chelanga, who won the Bix in 2017 when Fauble was second.

"I feel like physically I’m in a good spot," Fauble said. "Training has been going pretty well. I don’t have a ton of weeks under me but I’ve had some very positive workouts and I feel really strong. If I can go up there and really give myself a shot to win and hopefully finish a little bit higher than last time, I think that will be a good day.

"But I’m really just looking forward to racing again," he added, "and getting back to that level of normalcy that we had pre-pandemic."

A handful of runners have dropped out of the elite field for the Quad-City Times Bix in recent weeks for a variety of reasons.

Noah Droddy suffered a knee injury during a workout Sunday and was forced to withdraw and Julia Kohnen Griffey dropped out earlier because of a foot injury.

Mark Lokwanamoi of Kenya and Letebrhan Haylay of Ethiopia both were forced to withdraw because of travel issues and Riham Senani of Algeria was told by her country’s federation that she could not compete in the U.S.

What was the craziest story in sports yesterday?

What was the craziest story in sports yesterday?

Will we see Max Scherzer traded?

Will we see Max Scherzer traded?

The six kids clustered in the foyer at first, a handful of hesitant, half-sized people, but Laura Luciani, of the YMCA, soon had them in hand …

Scott Fauble (15) leads a pack that includes Jonathan Grey (11) and Reid Buchanan (17) at the McClellan Boulevard turnaround halfway through the 2017 Quad-City Times Bix 7.

Scott Fauble crosses the finish line as the top American in the 2019 Boston Marathon.

Scott Fauble, of Flagstaff, Ariz., leads the pack during the 2019 Boston Marathon in Newton, Mass.