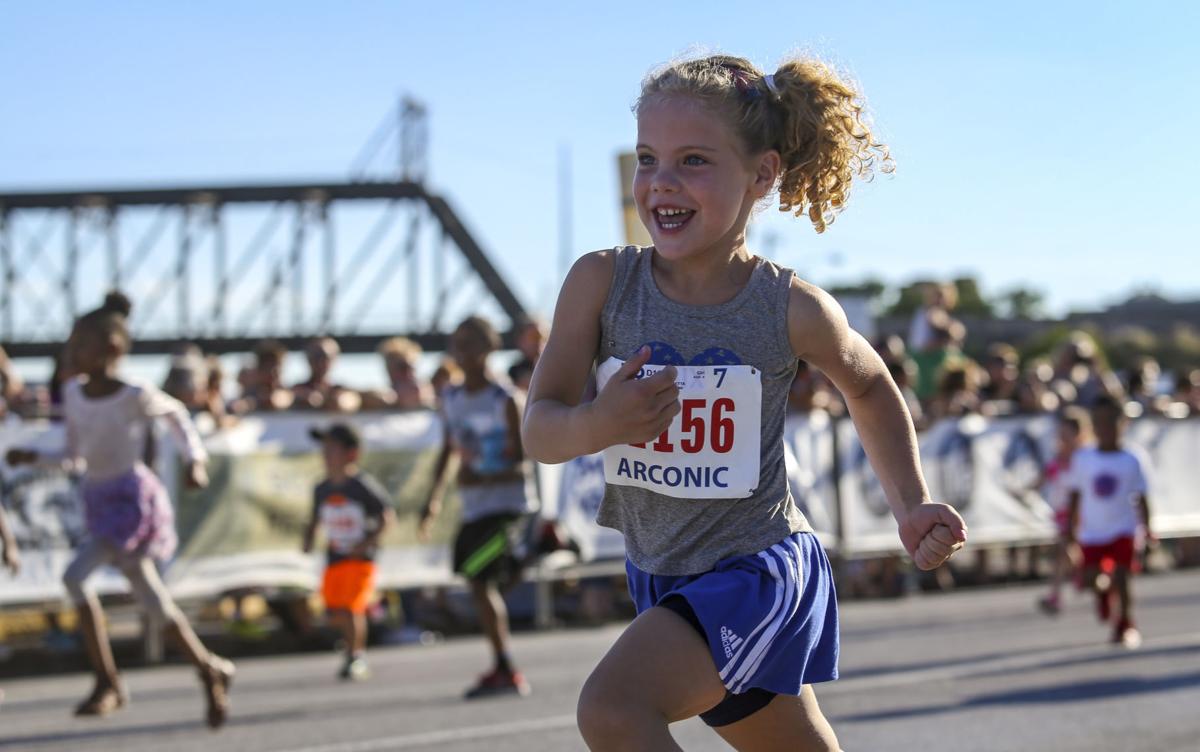 Greta Morgart, 4, of Bettendorf runs near the front of her race group during the Arconic Jr. Bix 7 in Davenport on Friday. Around 2,000 kids participated in the 20th annual event, a kickoff for the Quad-City Times Bix 7 weekend. 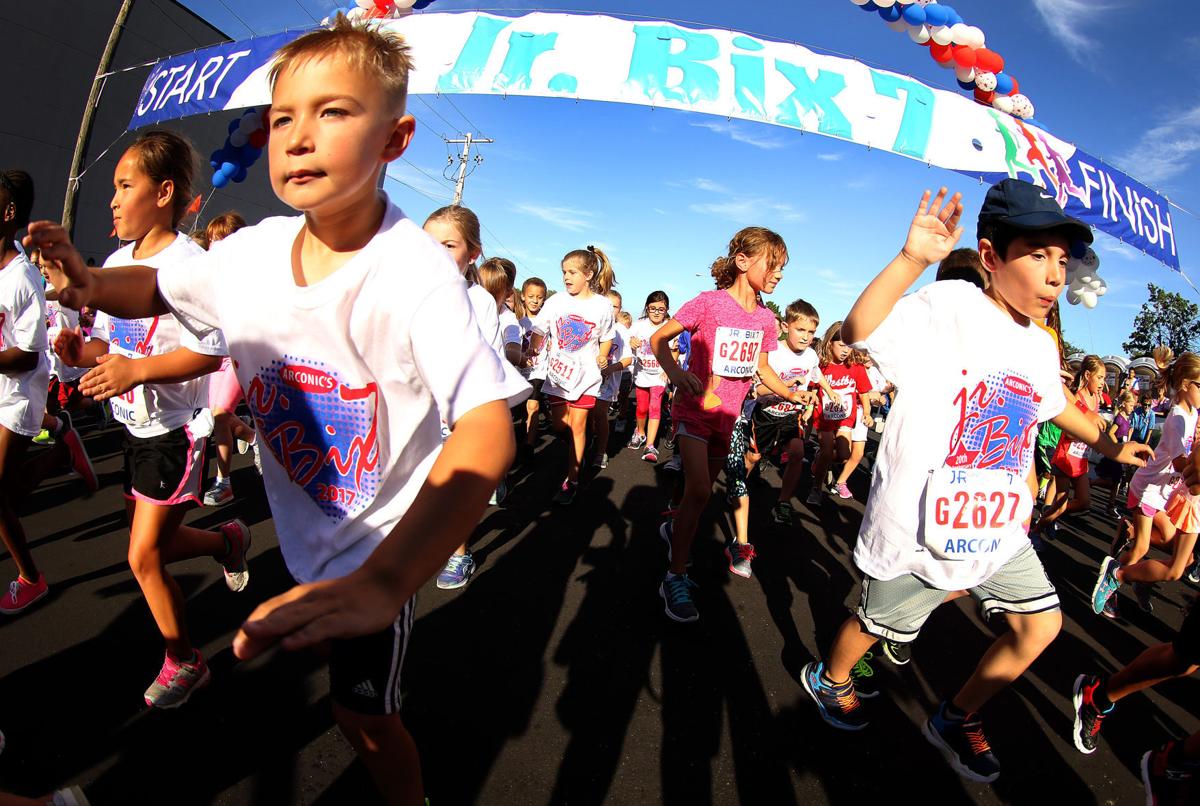 The 7-year-olds run during the 20th annual Jr. Bix 7 on Friday in Davenport. 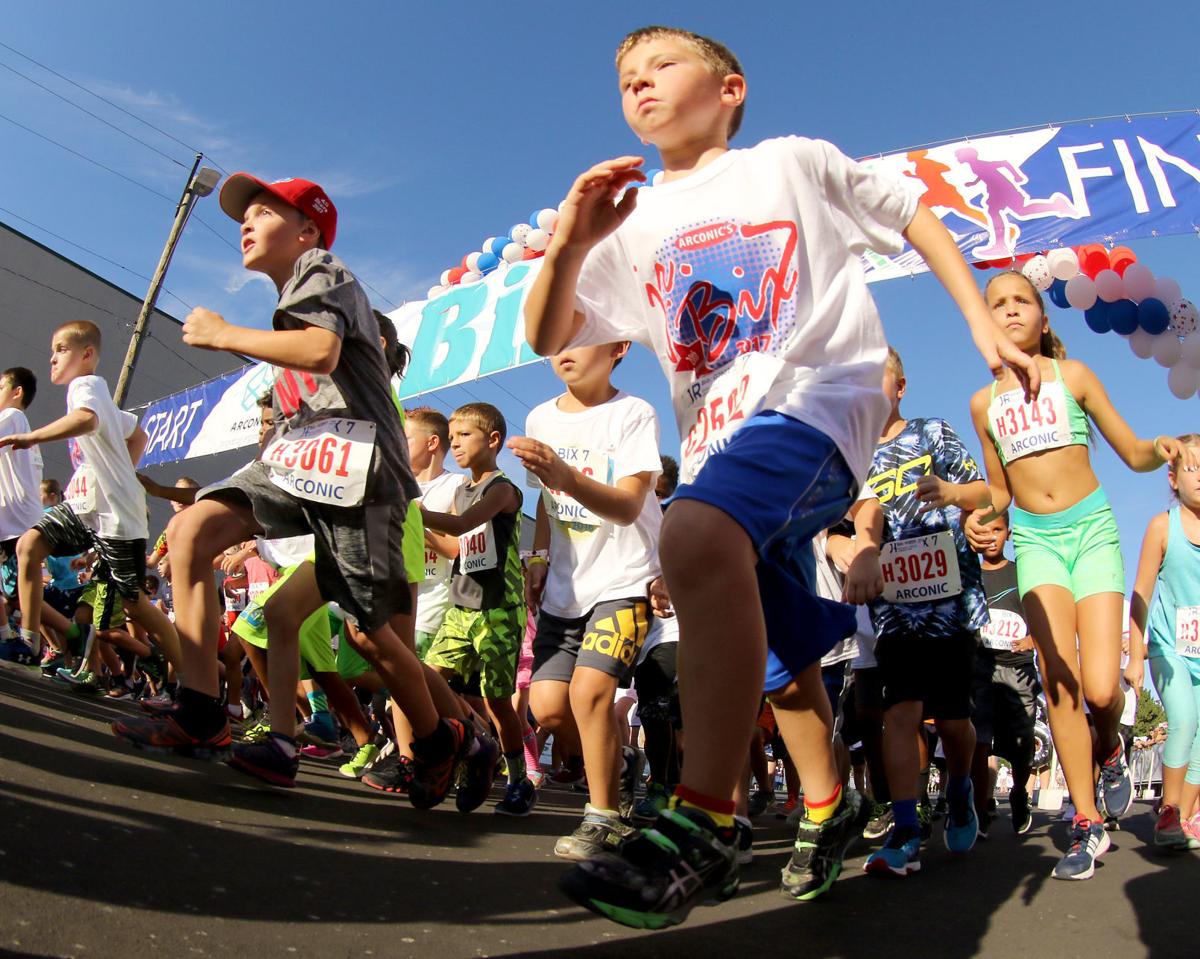 The start of the 8-year-olds as they head down 4th Street on Friday at the Arconic Jr. Bix 7. 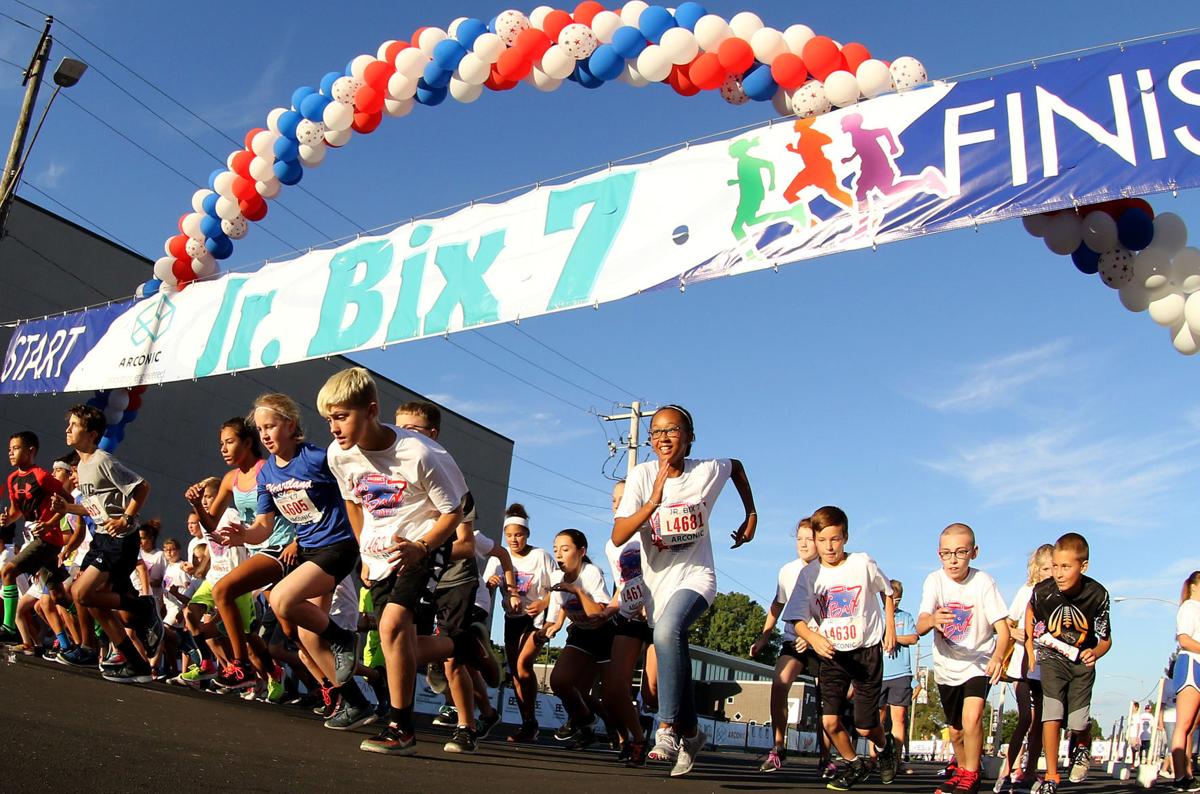 The 12-year-olds start the Arconic Jr. Bix 7 on Friday in Davenport.

Dillynn Moore held her medal high, showing it off.

For the second year in a row the 6-year-old who attends Eisenhower Elementary in Davenport with her brother Daxton, 7, took to the course for the running of the 20th annual Arconic Jr. Bix 7.

Dillynn and Daxton put their skills to the test and performed well in a large field.

“Because I’m fast and strong,” was Dillynn’s response when asked if she liked running the race.

Daxton nearly won his race. The kids come by their talents naturally. Mom is Jami Hester Moore, a former star SEC volleyball player at Mississippi State. Her father is the late Jim Hester, who served the Quad-City community in many philanthropic roles, as well as leading the Davenport School Board. Jim Hester also was an NFL lineman.

Arconic spokeman John Riches breathed a heavy sigh as he thought back to the very first Jr. Bix 7 that his company, then known as Alcoa, sponsored.

“We started this in 1998 to celebrate the 50th anniversary of the company in Bettendorf,” Riches said as he looked around at the approximately 2,000 children preparing for their races. “It was something our employees really enjoyed doing and look what it’s turned into.

“It’s hard to believe it’s been 20 years, but what is interesting to see are the local sports stories about high school and college kids who started their careers with the Jr. Bix,” Riches said.

“The Bix has grown,” he added. “We have the Brady Street Sprints on Thursday, the Jr. Bix on Friday and the race Saturday. It’s not just a run anymore. It’s a community event spread out over several days.”

“This year she walked about half way and then wanted to be carried,” Jordahl-Buckles said. Sienna was happy as a lark after the race was done and she was sitting on a curb munching on a bag of Cheetos.

While the kids got their fun in the Jr. Bix, Ben was ready for his seventh run at the Bix. The crowd, he said, is part of the fun.

“I love the race because of the crowd,” Ben Porter, 33, said. “You’re not really going to go up Brady Street hill all that fast anyway.

Ben Porter said he got into running when they lived out in North Carolina and he and Andrea were having their first child. And he has kept at it ever since, running half- and full marathons.

“The Bix, if you want to do it right, is as tough as a half-marathon,” he said.

Micha and Melyna Mosher, of Davenport, had their hands full with about 11 kids who were running the Jr. Bix.

But the Moshers had help.

The Moshers are part of the running group the Quad-City Hash House Harriers, Dirty Pirate Chapter. The hashers can be seen just about anywhere around town running through the streets and dressed up in whatever costume suits their fancy.

The kids running the Jr. Bix are known as the Sippy Cup Hash House Harriers.

“These are all kids whose parents are hashers,” Micah Mosher said. “So we put together a group for the kids and the parents. It gets the kids into running.”

On hand signing autographs was the great Bill Rodgers, who will be running the Quad-City Times Bix 7 for the 38th year in a row.

“That’s the thing about running,” Rodgers said. “It’s a sport that someone can do all their life. The key is to never quit.”

Around 2,000 kids participated in the 20th annual iteration of the race, a kickoff event for the Quad-City Times Bix7 weekend.

Did you survive the Bix? Check out our start-to-finish coverage of the Quad-City Times Bix 7 featuring stories, photos and videos from around …

For those that can't get enough Bix. Here's a time lapse video of runners coming up and going down Brady Street Hill.

Greta Morgart, 4, of Bettendorf runs near the front of her race group during the Arconic Jr. Bix 7 in Davenport on Friday. Around 2,000 kids participated in the 20th annual event, a kickoff for the Quad-City Times Bix 7 weekend.

The 7-year-olds run during the 20th annual Jr. Bix 7 on Friday in Davenport.

The start of the 8-year-olds as they head down 4th Street on Friday at the Arconic Jr. Bix 7.

The 12-year-olds start the Arconic Jr. Bix 7 on Friday in Davenport.