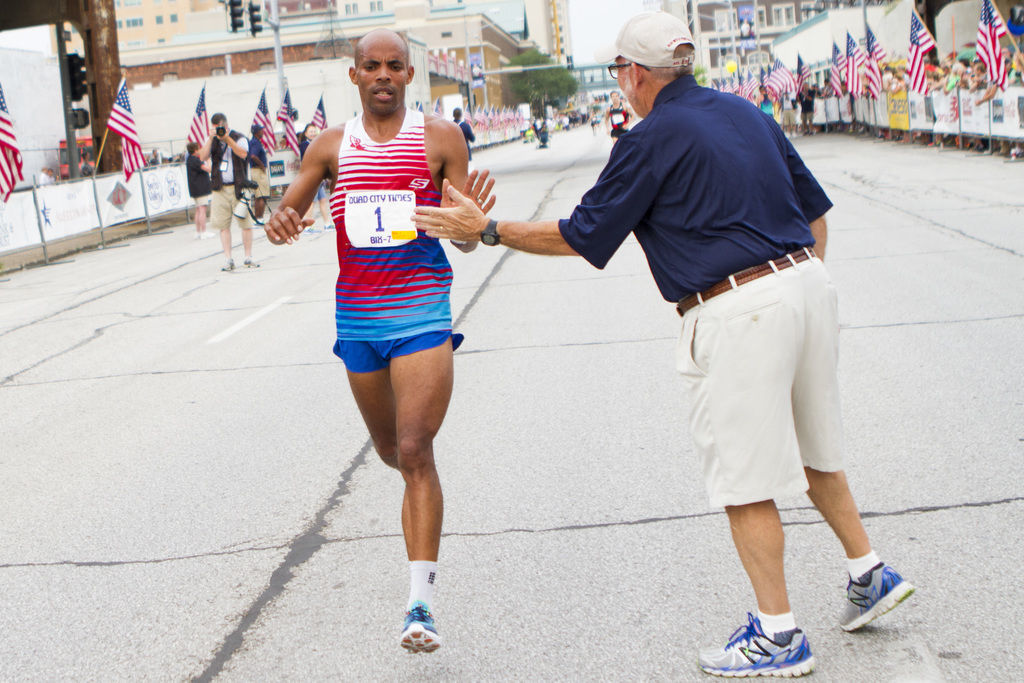 Meb Keflezighi gets a salute from race director Ed Froehlich as he crosses the finish line of the 2014 Quad-City Times Bix 7. 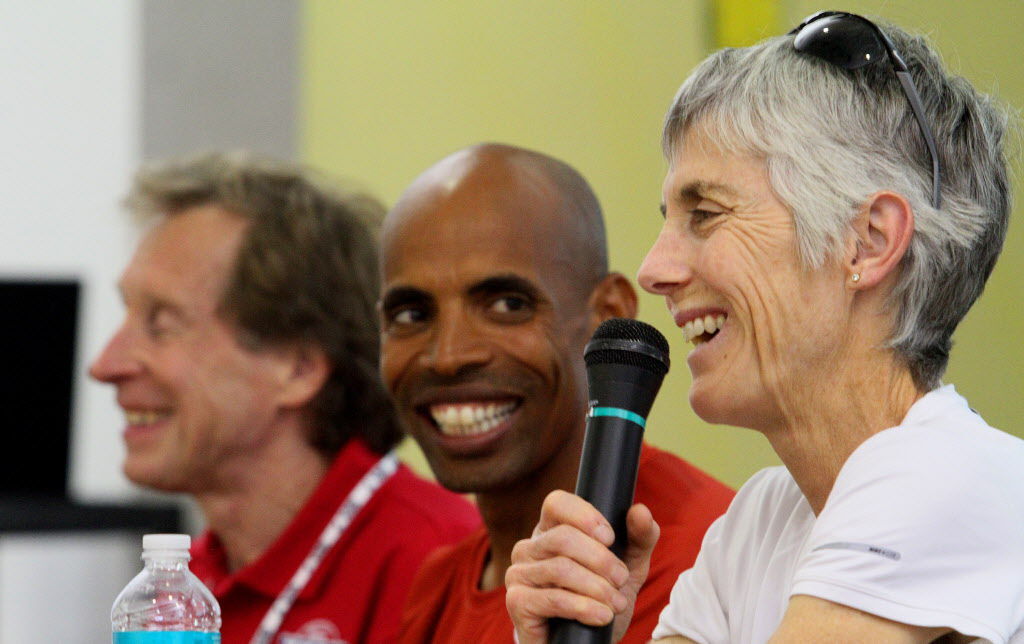 Ordinarily, Meb Keflezighi spends as much time on airplanes as he does at home in Tampa, Fla., with his wife and three daughters.

Even though he has retired as a competitive runner, Keflezighi is constantly flitting around the globe to appear at races, give speeches, participate in clinics and engage in fundraisers. Sixteen years after winning an Olympic silver medal and six years after enthralling and inspiring the country with a dramatic victory in the Boston Marathon, he remains in high demand.

But these are unusual times.

Because of the COVID-19 pandemic, Keflezighi has not left the state of Florida since March. There was one trip over to Orlando to watch one of his daughters play soccer and that’s about it.

He still is going to find a way to participate in one of his favorite races, albeit in a different sort of way.

Keflezighi, who won the Quad-City Times Bix 7 in 2002 and 2009 and has placed in the top 10 a record-tying eight times, will do his own Bix 7 in Tampa as the 45-year-old race is held this year on a virtual basis.

He has a 6½-mile course that he runs on a regular basis that he’ll probably just modify into 7 miles. He already has his 2020 Bix T-shirt that he plans to wear and figures he’ll do his Bix 7 alone, just jogging along at a leisurely 10-mile pace.

The course won’t have as many ups and downs as the regular Bix 7. Tampa isn’t exactly a high-altitude region.

He recalled that before he ran the Bix 7 for the first time in 2002, he was chatting with a fellow runner and telling them he was going to a race in Iowa.

"They said ‘Oh, that’s all cornfields. That course is going to be as flat as a pancake,’" he said. "Then I got here and looked at it and it was much different than I expected."

Keflezighi, who emigrated to the U.S. at age of 12 in the midst of a 30-year civil war in his native Eritrea, admitted it has been a trying and emotional year for him, just as it has been for almost everyone in the U.S.

It’s not just because of the coronavirus.

Like almost everyone, he was disturbed by the video of George Floyd dying at the hands of Minneapolis police officers and the widespread social unrest that has ensued.

Although he is as upbeat and non-controversial as any athlete around, Keflezighi admitted there have been moments when even he felt he was profiled or persecuted because of the color of his skin.

Being a national hero, an Olympic medalist, the author of three books and the winner of an Outstanding American by Choice award from the United States Citizenship and Immigration Services doesn’t make you immune to such things.

He recalled being corralled by a highly suspicious security guard once while running in Jacksonville, Fla.

"They wanted to see my social security card or driver’s license or some kind of identification," he said. "How often do you carry those things when you’re out running?"

There was another incident that occurred the day after he ran in the Bix 7 in 2011. He flew from the Quad-Cities to Minneapolis to participate in another event there, and after a long day of activities with very little sleep, he was driving to his hotel when he was pulled over by a police car.

The officer told Keflezighi he had been swerving. He was held for about a half hour and put through every sobriety test imaginable. After finally determining that he was not under the influence of anything except possibly fatigue, he was issued a written warning.

"So I guess I have a warning on my record in Minnesota," Keflezighi said with a chuckle.

In spite of those incidents, he said he has tremendous respect for people employed in law enforcement and is optimistic that our country can move beyond the divisive emotions that currently exist.

"Where I come from, teachers and police are the most respected people, above everyone else," he said. "At this place and time, it’s not that way unfortunately. I hope we can all get back to respecting one another."

Watch now: Bears secondary bids to 'Shut Them Up'

Meb Keflezighi gets a salute from race director Ed Froehlich as he crosses the finish line of the 2014 Quad-City Times Bix 7.