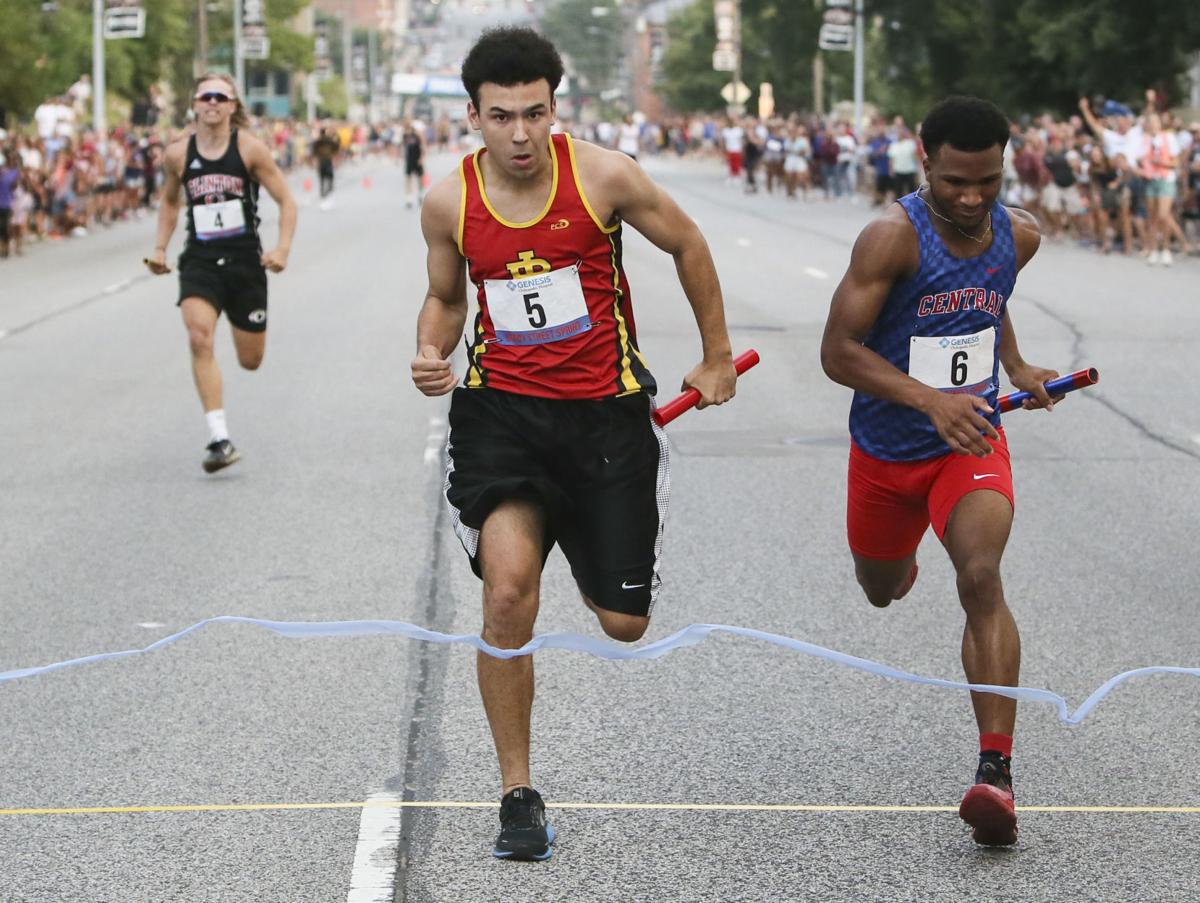 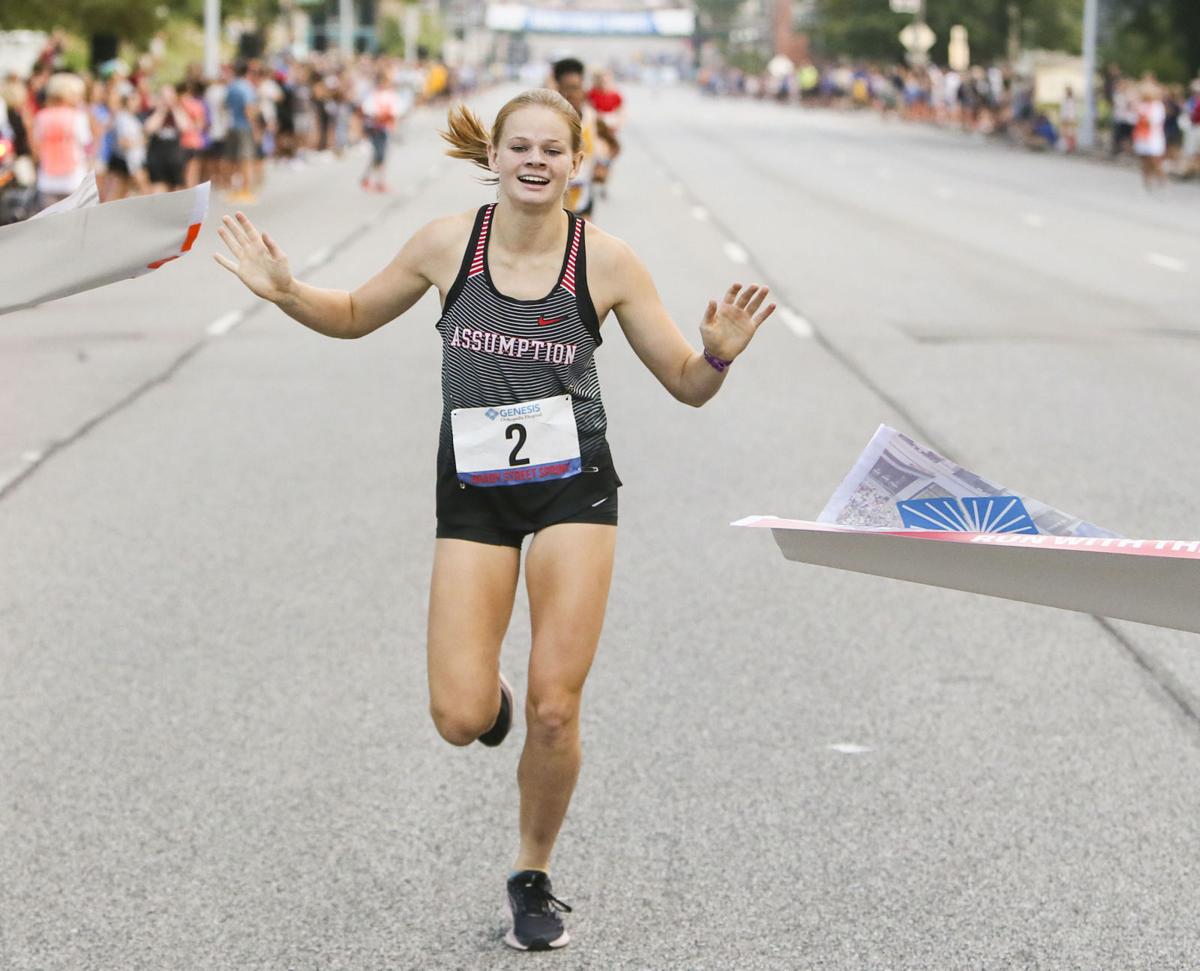 Morgan Jennings crosses the finish line in the women's open during the Genesis Sports Medicine Brady Street Sprints in Davenport on Thursday. 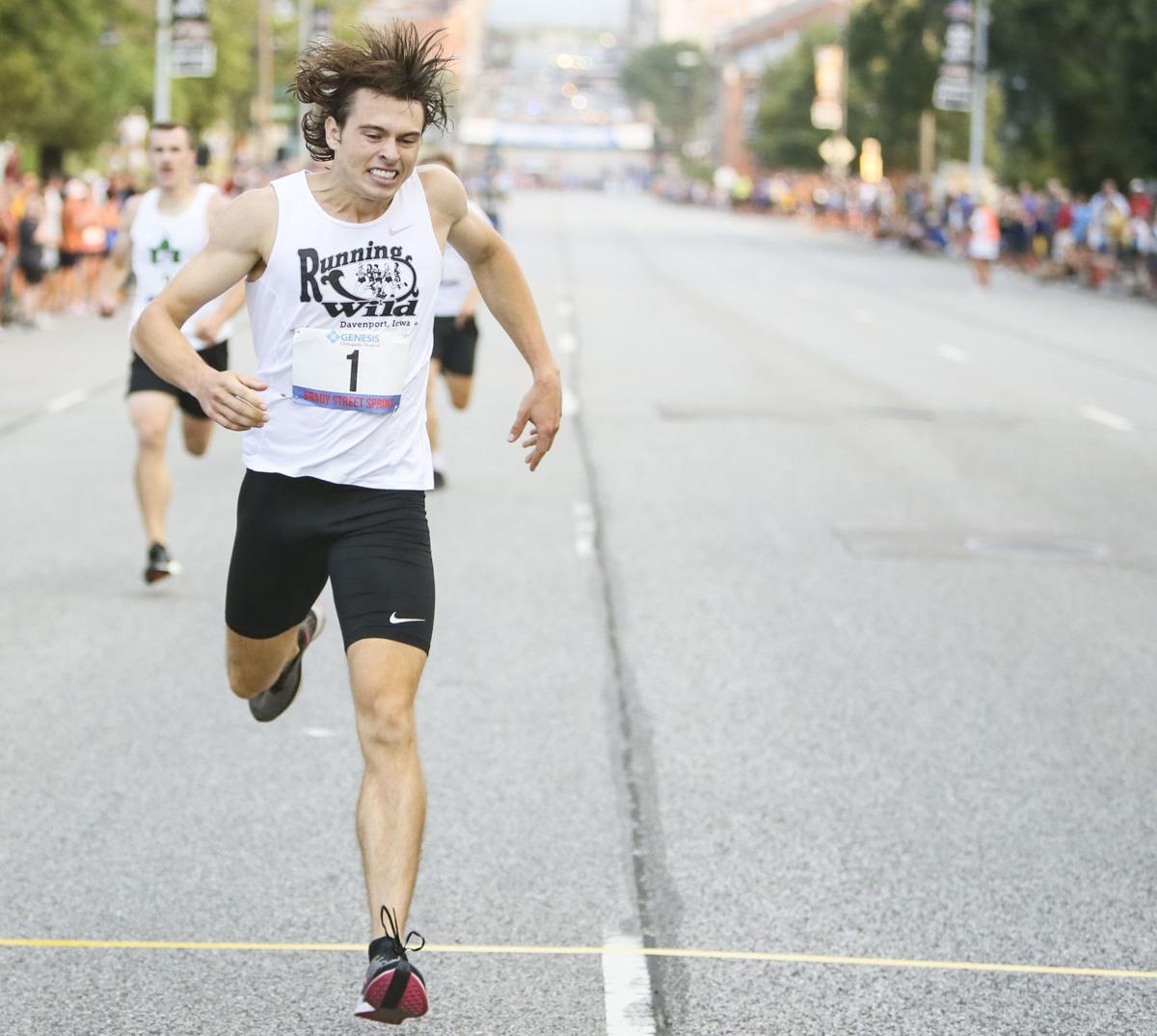 Jack Reemtsma crosses the finish line in the men's open during the Genesis Sports Medicine Brady Street Sprints in Davenport on Thursday.

Rock Island’s Jayden Bomelyn was not so sure, looking up at the daunting Brady Street Hill.

“It was scary,” Bomelyn said. “It definitely looked intimidating from the bottom.”

Bomelyn said he was asked Tuesday to be a part of the relay team that the Rocks were going to send over to take on six other teams, including strong Iowa programs like Pleasant Valley, Bettendorf and Davenport Central. Defending champion Bettendorf had won the event in 2018 and 2019.

The quarter mile sprint up Brady Street Hill was roughly 400 meters — the same distance Bomelyn and his teammates had run at the Illinois State Track Meet as part of a 4x100 relay team in June.

When taking their positions at the various handoff points, Bomelyn said he was still unsure how sprinting up the roughly 9-degree grade of Brady Street Hill would go.

“I thought ‘Oh, my goodness’ but we still went out and ran hard,” added Bomelyn, who was taking part in the event for the first time.

In the end, Bomelyn and his teammates did just fine, winning the event in 50.75 seconds, just edging out the team from Davenport Central with Bomelyn holding off the Blue Devil anchor with a strong kick and lean at the tape to win.

“I could not have done it without my guys,” Bomelyn said of his teammates putting him in position to win. “It was all of us. But I think that is why they wanted me to run (anchor), I am known for holding guys off at the end of a race.”

In the girls relay, Davenport Assumption won the event for the first time since 2017, edging past Bettendorf while Davenport Central took third.

The group of Alaina McConnell, Olivia Lynch, Annika Kotula and Laney Fitzpatrick won the event for the Knights in a time of 58.38. Lynch, Kotula and Fitzpatrick teamed up this past spring to win the 1,600-meter relay at the Iowa state track and field meet.

The only person missing from that group was Morgan Jennings, but Jennings was busy taking home her own championship on Thursday. The soon-to-be senior at Assumption won the women’s open division in a time of 1:11.85.

Jennings used a late kick to get separation from Bettendorf’s Maya Williams, who took second place in 1:16.44. Jennings said it was nice to get the win after taking third in 2019.

She added Williams had beaten her in an event at the Mississippi Athletic Conference meet earlier in the spring.

“I knew coming in Maya was a really good runner and I wanted to stick with her for the first part of the race,” Jennings said. “In the last like 30 meters, I just said I have to go now.”

In the men’s open division, Davenport Central and St. Ambrose alum Jack Reemtsma claimed the title and came the closest to breaking an event record. He won his race in 58.26, just missing the standard of 57.54 set by Dave Paulson in 2006. Lucas Hofer was right behind the winner at 59.96.

Reemtsma said overcoming the steepness of Brady was just a little too much to overcome to set a new record.

“If I would have pushed it that much, I would have ended up on the ground,” Reemtsma said. “I went to kick at the same place I usually do but this proved to be a very different animal. My legs have never quite felt as fatigued as they did.”

For the first time since 2014, the women’s 30-39 year-old division has a new champion. Jen Paul, who had ruled that division, did not participate this year. Instead, her close friend Becky Anderson won the event in 1:20.05. Sara Doneth was second in a time of 1:23.85.

“Jen is one of my best friends so to follow in her footsteps means a lot,” Anderson said. “She made me do it two years ago when I turned 30 so she definitely was a big encouragement.”

The Mel Foster team won the Sponsor Relay for the second-straight time, posting a mark of 59.70.

Watch now: A look back at the Quad-City Times Bix 7

Morgan Jennings crosses the finish line in the women's open during the Genesis Sports Medicine Brady Street Sprints in Davenport on Thursday.

Jack Reemtsma crosses the finish line in the men's open during the Genesis Sports Medicine Brady Street Sprints in Davenport on Thursday.