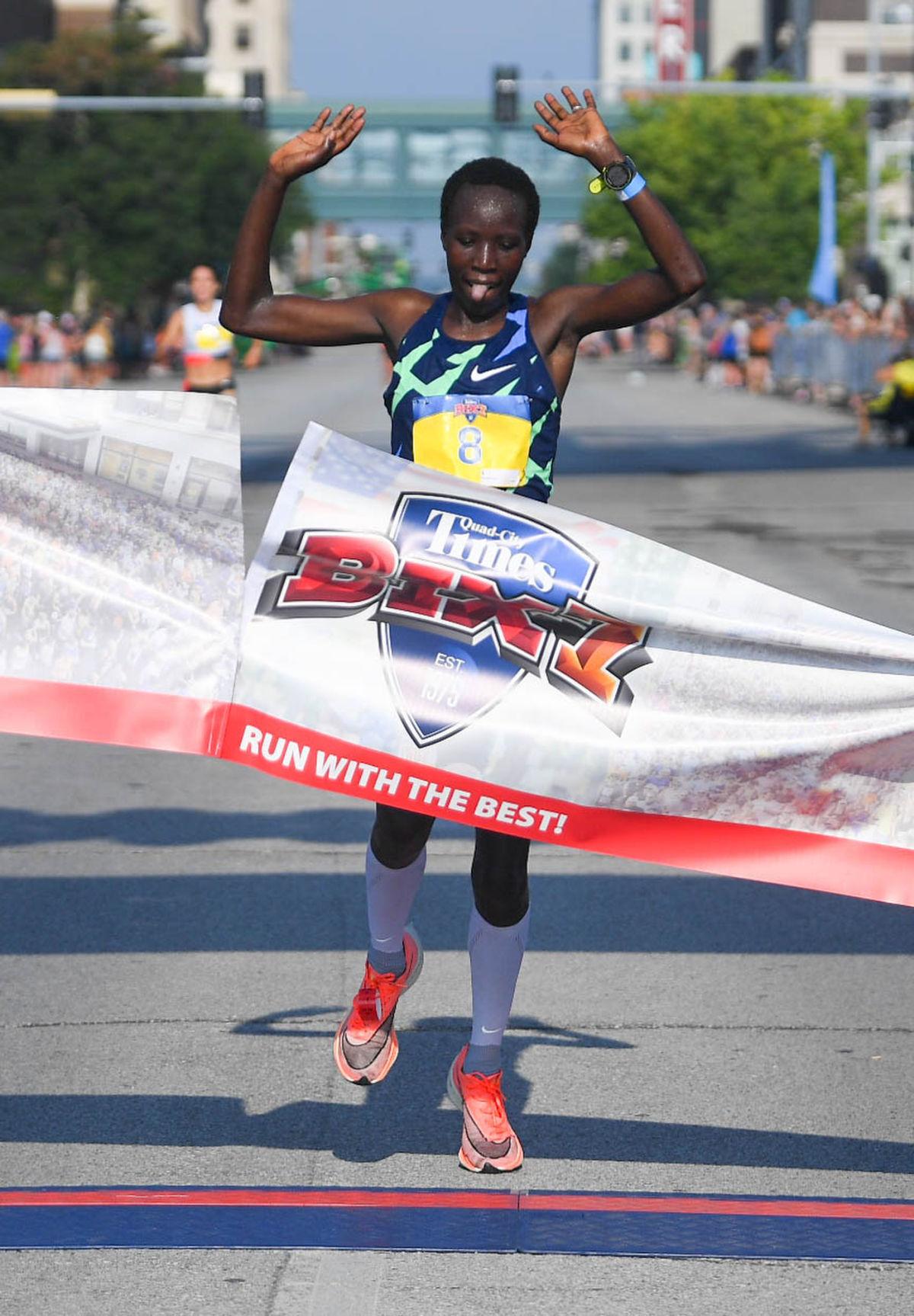 Female winner Edna Kiplagat crosses the finish line during Saturday's 47th annual Quad-City Times Bix 7. the 41-year-old set records for being the oldest winner and having the best time of any female over 40, winning in 37 minutes, 17 seconds. 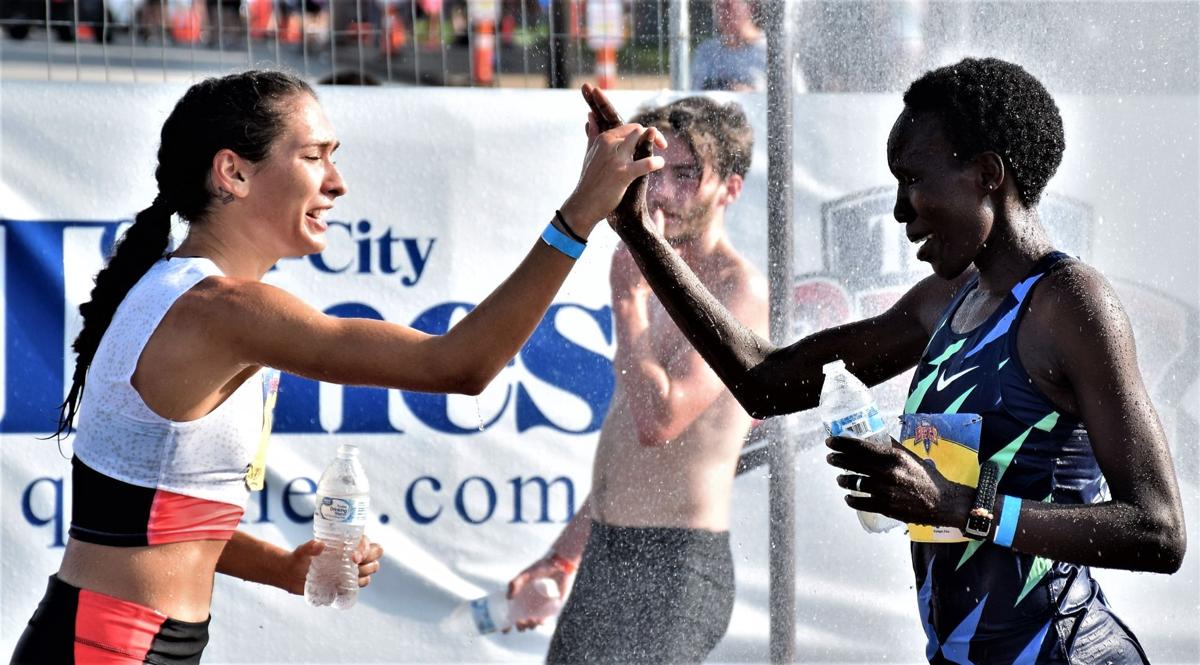 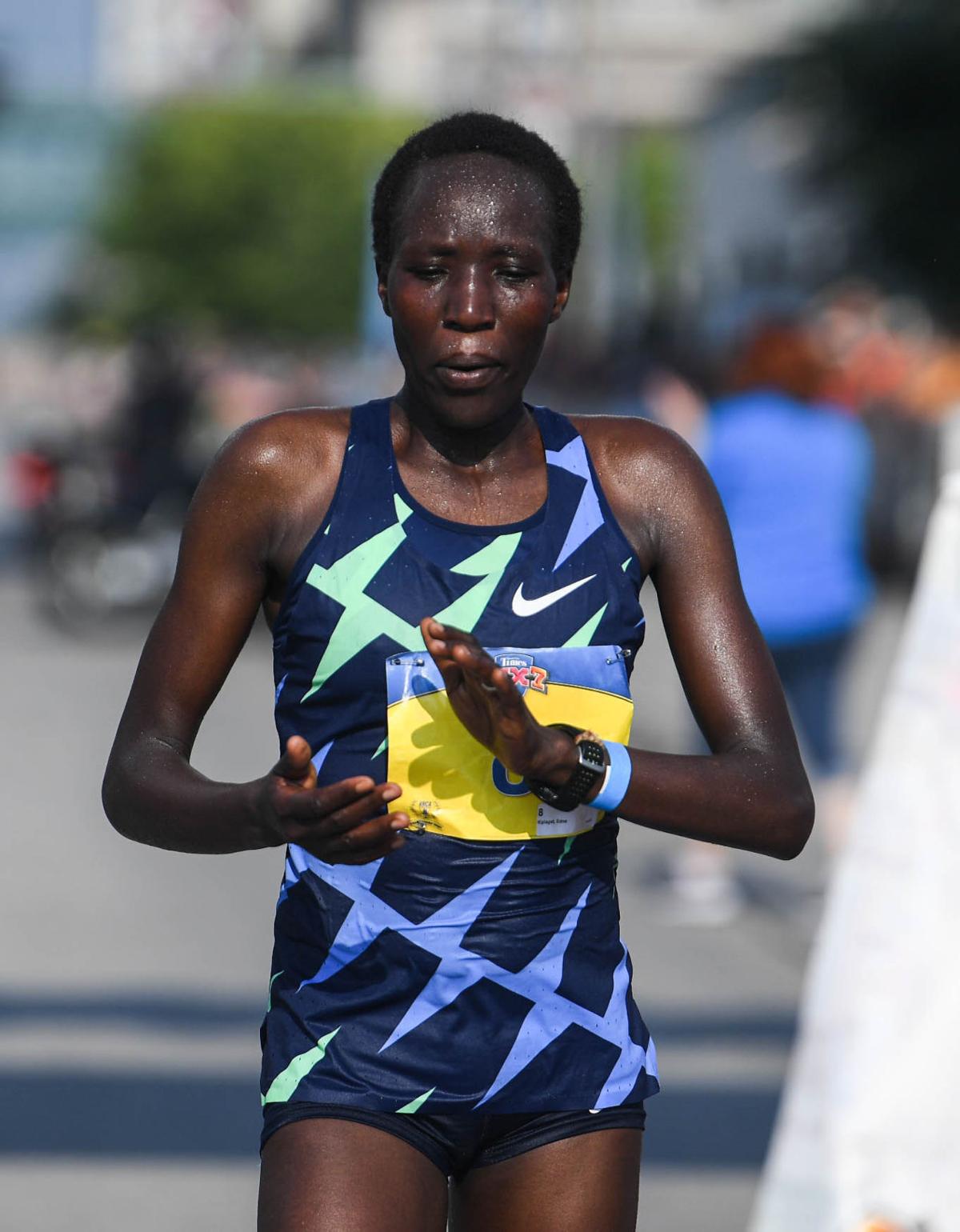 And the only problem with that plan was that they could never catch the wily veteran who traversed the hilly course in the heart of Davenport and into the record books, becoming the oldest female overall winner in the 47-year history of the Bix 7.

“We hit the top of the hill and she kicked it into turbo mode,” said Werner of Kiplagat.

Kiplagat out-kicked the two Americans in the final three miles to win in 37-minutes, 17-seconds. It is the first winning time over 37 minutes since 2010. It is also the fastest time by a female over 40, breaking the mark set by 2008 champ Edith Masai, who was 41 years, three months at the time of her 37:20 victory.

Warm temperatures (78 degrees) and high humidity (82%) at race time factored into the tactical race as the 23-year-old first-timers were willing to shadow the 41-year-old in her third Bix appearance.

“Considering the conditions, it was humid, but not too warm,” said Kiplagat.

Ironically, those conditions fit right into her strategy for the race.

“My strategy was to start easy and have fun and see how I perform at the fourth mile,” said Kiplagat, who finished sixth here in 2003 and fourth in 2005. “After the fifth mile, my body responded and I tried to run as smooth as possible.”

That form carried her past the elite field that was missing 2011 Bix winner Caroline Rotich, who was not able to get out of Nairobi because of COVID-19 testing issues, according to elite race coordinator John Tope.

“You can’t be upset getting beat by Edna Kiplagat,” said Werner. “I think we both came out here today just wanting to learn. … Running with so many women like Edna is incredible.”

But the race came down to the top three before Kiplagat pulled away.

“I knew she was a good racer,” said Werner of Kiplagat, who controlled the pace throughout. “She was kind of playing this ‘I’m tired thing’ and I know she’s got more. She elbowed me on accident and she’s like ‘Oh, I’m sorry.’ And I was like ‘She’s feeling good. She’s talking.’ I know she’s got more.”

Just after that, Kiplagat kicked it into another gear and took control of the race.

“I’m grateful to win the race today,” said Kiplagat. “I know the field was so competitive and I tried my best and I’m happy.”

Both Werner and O’Keeffe were ecstatic with their results. Both ran the U.S. Olympic Trials about a month ago and were coming off last weekend’s US 6K Road Championship that Werner won and O’Keeffe finished fourth.

“It’s just a really fun race out there, too,” said O’Keeffe. “It’s been so long since I’ve been in a race with a lot of crowds and support. That was awesome to have.”

The Americans also fed off each other. They said it helped having a training partner running side-by-side.

“We just started this new (running) group and to go 2-3 it’s like ‘yes,’” said Werner, who was also dealing with issues caused by a cold.

“It’s such a good feeling,” said O’Keeffe of the teammates’ lofty finish.

“Being able to race and kick with Edna is amazing,” said Werner. “It was awesome.”

Both Werner and O'Keeffe said they are looking forward to coming back and hopefully putting some of the knowledge gained on Saturday to good use.

Female winner Edna Kiplagat crosses the finish line during Saturday's 47th annual Quad-City Times Bix 7. the 41-year-old set records for being the oldest winner and having the best time of any female over 40, winning in 37 minutes, 17 seconds.