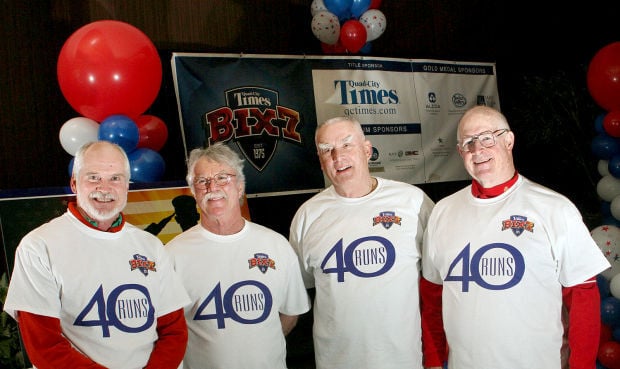 Don Fish, Ed Lillis, Gary Fischer and Steve Clark, the four competitors who have never missed a Quad-City Times Bix 7, pictured here as they prepared for their 40th race in 2014. Despite the COVID-19 pandemic creating a virtual race this year, all four plan to take part in their 46th race this month. 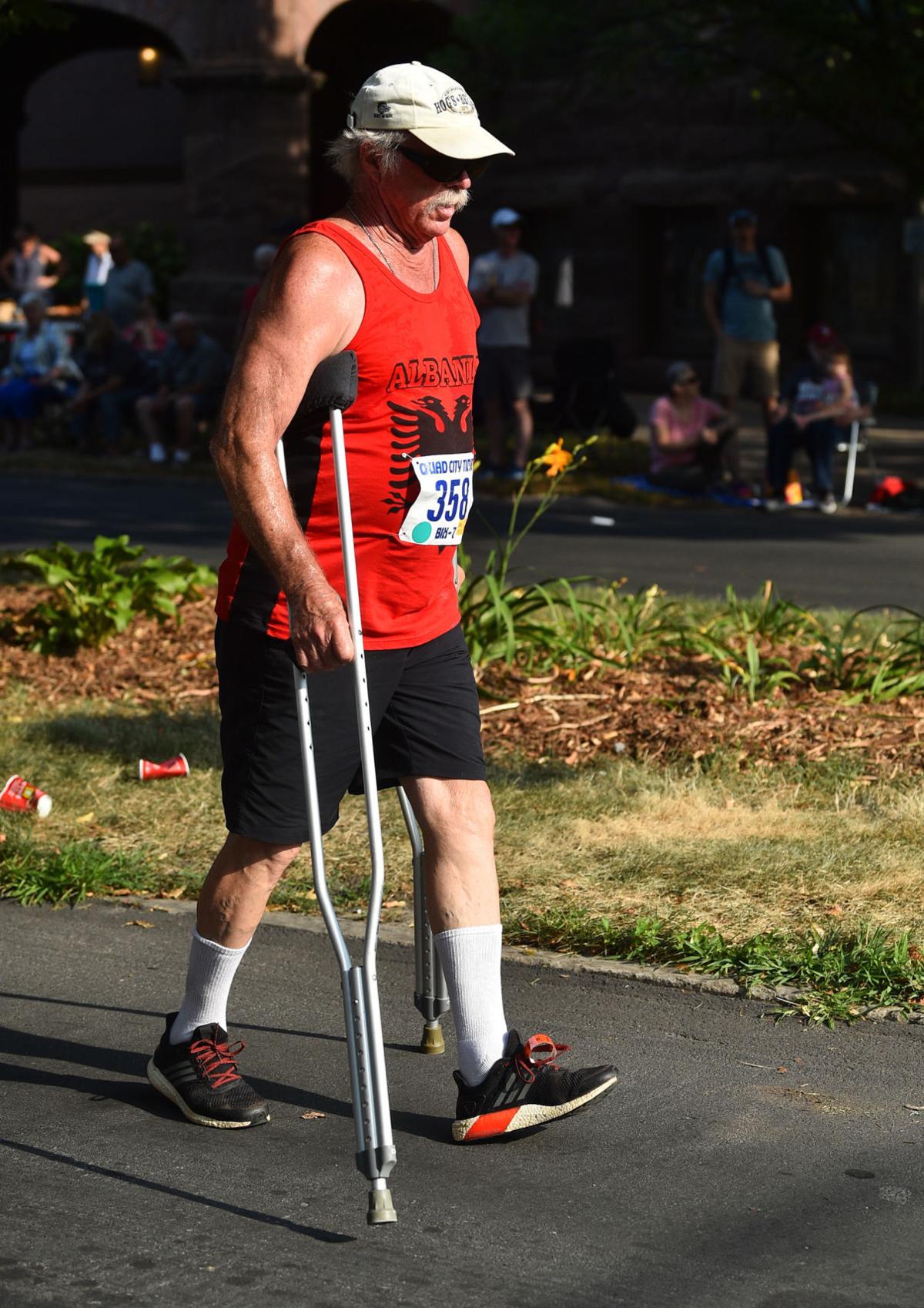 They haven’t missed a Quad-City Times Bix 7 in 45 years and it would take more than a pandemic to prevent these four competitors from making it 46 straight this year.

Steve Clark, Gary Fischer, Don Fish and Ed Lillis — the only four people to participate in every Bix 7 that has been run — are finding their own ways to keep their seven-mile streaks intact.

Just as the Bix 7 has adopted a virtual format this year because of the COVID-19 pandemic, each of the four have adopted their own personalized game plan for this year’s race.

“That’s the good thing about the virtual format. You can find something to make it work for you,’’ Fish said.

Entries in this year’s Bix 7 can participate in the event anytime between July 1 and the race’s originally scheduled July 25 date and with the race going virtual, individuals can participate anywhere they like.

Clark has actually completed his Bix 7, circling a makeshift course in the neighborhood around his family home in the Chicago suburb of Streamwood, Ill., last weekend.

Fischer, an Iowa City resident who has been dealing with some knee issues this year, plans to drive to Davenport on Friday and walk the actual seven-mile Bix 7 course with his two daughters.

Fish welcomes one benefit of this year’s virtual format and will avoid the hills. He plans to complete his seven-mile run on the comparatively flat Duck Creek Bike Path in Davenport.

Lillis is still weighing a couple of possibilities after a memorable 2019 Bix 7 experience. Accompanied by his sons James and John, Lillis walked the Bix 7 on crutches a year ago just weeks after undergoing hip replacement surgery.

He’s currently contemplating taking on the actual course this year or as the coach of a boys track program at Rock Island High School where a new track surface is in the process of being installed, Lillis said he might also christen the completion of that facility with a seven-mile tour.

“I’m going to follow my instincts,’’ Lillis said. “My first thought was to find a nice, cool morning and do the actual course, but 28 times around the track with not a single hill has its own appeal, too.’’

And in the midst of the most unique year in the race’s history, the appeal of the Bix 7 has brought the four back.

“It’s July. When you’ve been doing something on the last Saturday of July for the past 45 years, it becomes part of the calendar. It’s time to Bix,’’ Fish said.

“It’s been a strange year with all of these virtual races. I missed the Firecracker Run (in East Moline) on the Fourth of July and I’m looking forward to doing the Bix even if it will be a different experience.’’

Fish had his own reason for looking forward to this year’s race.

“I turned 70 this year and moving into a new age group, I was thinking I had a reasonable chance to earn an age-group trophy, but I guess that won’t happen,’’ the Davenport resident said. “The tradeoff is without those hills, I should have a really good time to turn in.’’

“My wife said I should be timed with a calendar instead of a watch,’’ Clark said. “But I finished it.’’

He used an app and an assist from his daughter to put together a looping course of about one and one-third miles through his neighborhood to create a seven-mile distance. His wife, Betty, provided water on every lap as she watched from a lawn chair in the front yard.

Clark found the experience to be different that he envisioned.

“I went into it thinking that I might be able to put up a decent time, decent for me, but as I went along I found that there was nobody for me to catch,’’ Clark said.

“In past years, there’s always been somebody in front of me that I could try to get up with to keep moving me forward. This time, it was just me.’’

Fischer will also miss the crowds and the environment, but he won’t be alone.

He’ll be accompanied by his daughters, Becky Kastendick of Overland Park, Kan., and Suzy Gainer of Eldridge.

“The Bix is such a classic race and as I’ve gone from being a runner to a jogger to a shuffler, it’s always remained such a great event,’’ Fischer said. “The chance to be part of the same race with the legends has always been special and this year, it will be special to have my two girls out there with me.’’

Fischer said the Bix 7 has been a family affair over the years and he felt the seven-mile course through the streets and hills of Davenport was the place he needed to be even for his virtual Bix 7 experience.

“That’s all a big part of the Bix,’’ Fischer said. “The course is a classic. I’ll be walking it this year, but I’m looking forward to it. The hills, they’ll be a bit of a challenge but they always have been.’’

Lillis appreciated that challenge a year ago.

“To complete the race and to be out there with my two sons coming off of surgery, it was an exhilarating experience,’’ Lillis said. “The support I received along the course, it was amazing and a really special memory because of the people. That’s what the Bix is about, the people.’’

Fish praised the creativity first-year Bix 7 race director Michelle Juehring has shown in putting together virtual opportunities for people to participate not only in the Bix 7, but in the Prairie Farms Quick Bix two-mile run and the Arconic Jr. Bix for youths.

“I remember the first year Ed (Froehlich, who retired as the race’s director this year) was the race director and a thunderstorm turned the finish into a complete mess,’’ Fish said.

“There was no electronic timing — it was all paper — and it seemed like the back up at the finish line was about two blocks long. He got through, we got through it and Michelle will get through this COVID-19 stuff. She’s doing a great job of keeping people engaged.’’

Like many of the people who have and are continuing to register to participate in this year’s Bix 7, a virtual race is something entirely different.

“That’s a new thing for me,’’ Fischer said. “I’m sure it’s a different experience and I’ll miss the interaction with people along the course, but I’m glad I still have a way to participate.’’

Clark felt that way as well.

He missed more than a chance to run with the best this year.

“All of the fun and excitement, from the crowds lining the streets and cheering the runners on to getting to see the leaders and legends like Bill Rodgers out on the course, I missed that,’’ Clark said.

“All of that makes the Bix special and I missed that more than I expected. I’m looking forward to 2021 and being able to be back in Davenport along with everybody else.’’

“The way the city comes alive on Bix weekend, I think we’re all looking forward to that again next year,’’ Fish said. “I can’t wait.’’

Bix 7 has a plan but it's written in pencil

Normally by this time, about 3½ months before any runners takes those first adrenaline-infused steps up Brady Street Hill, the game plan for t…

Don Fish, Ed Lillis, Gary Fischer and Steve Clark, the four competitors who have never missed a Quad-City Times Bix 7, pictured here as they prepared for their 40th race in 2014. Despite the COVID-19 pandemic creating a virtual race this year, all four plan to take part in their 46th race this month.