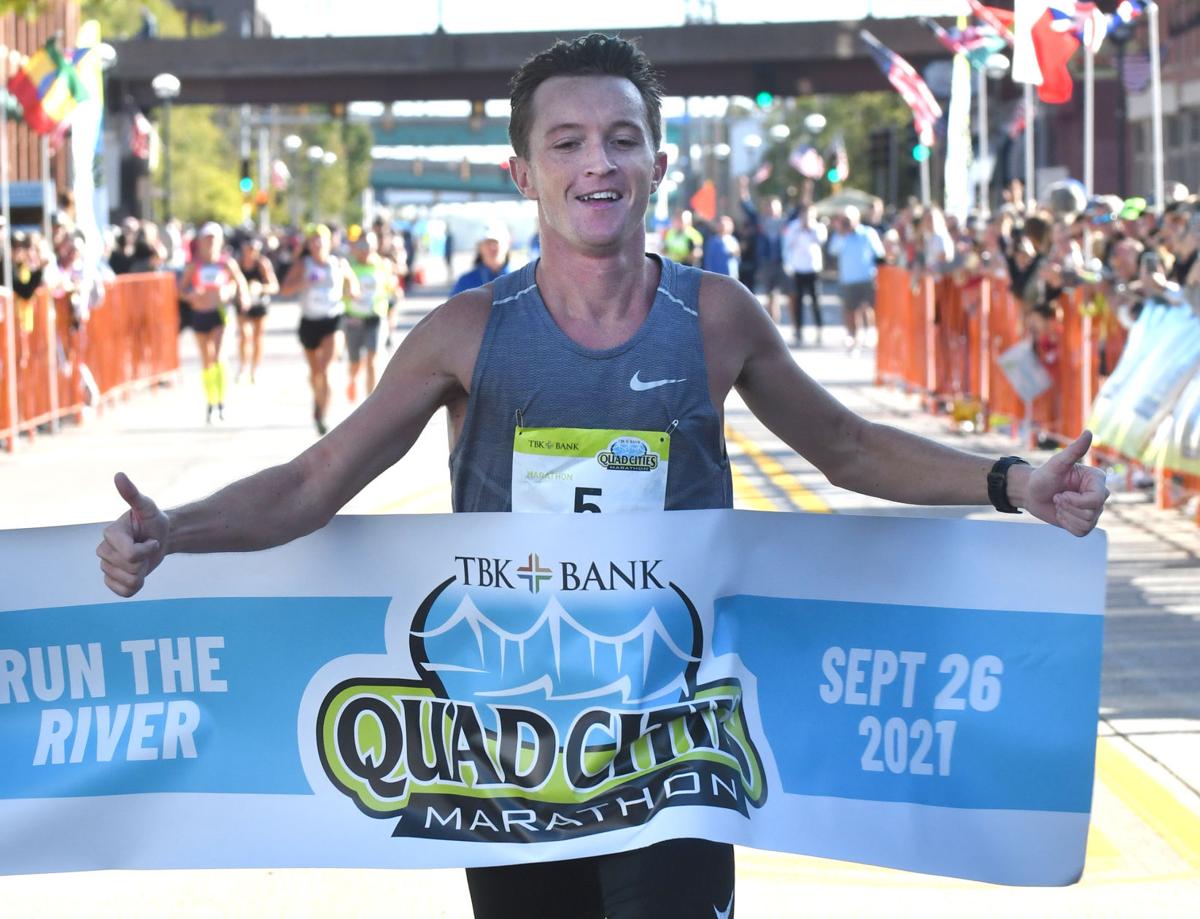 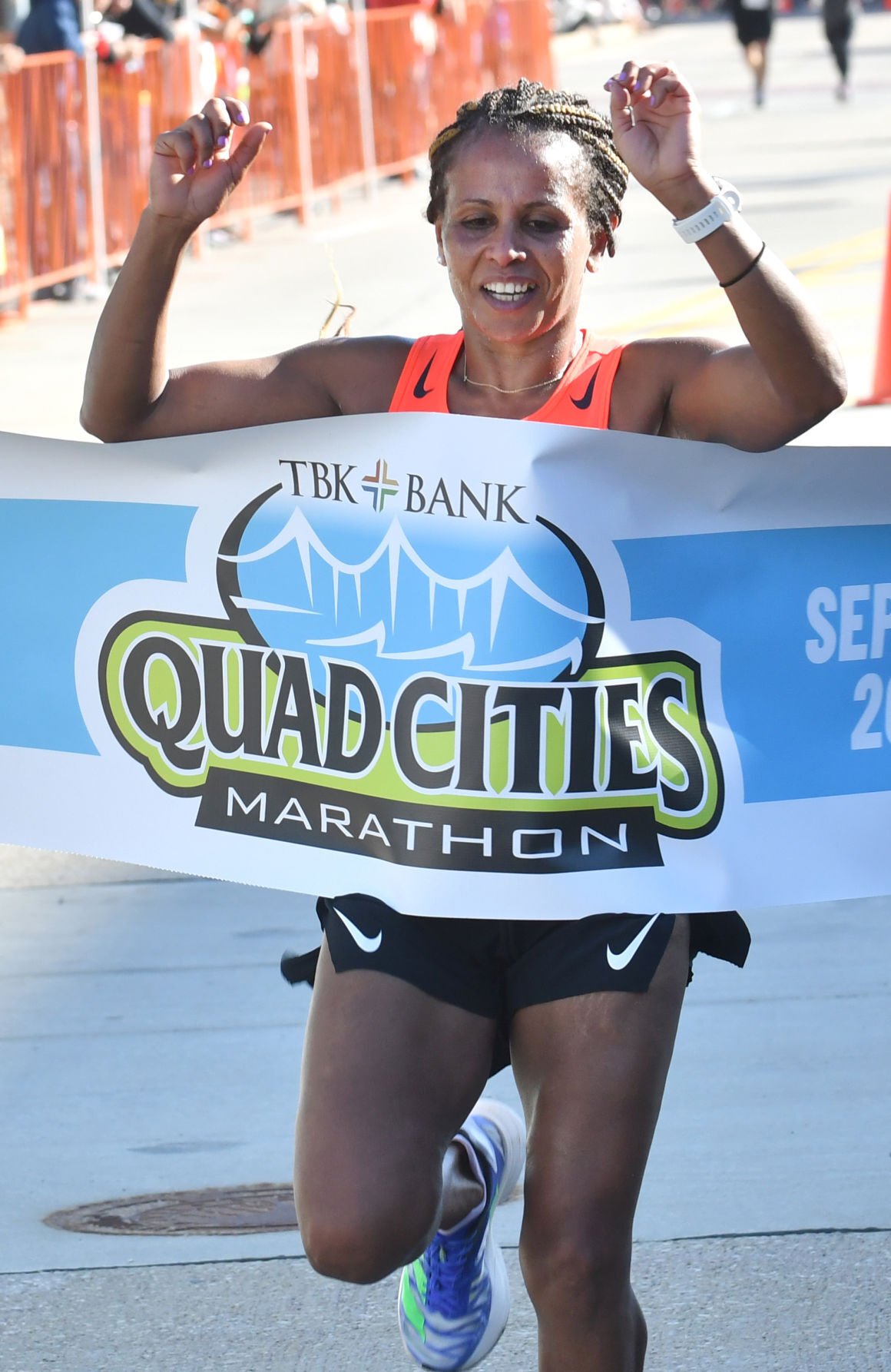 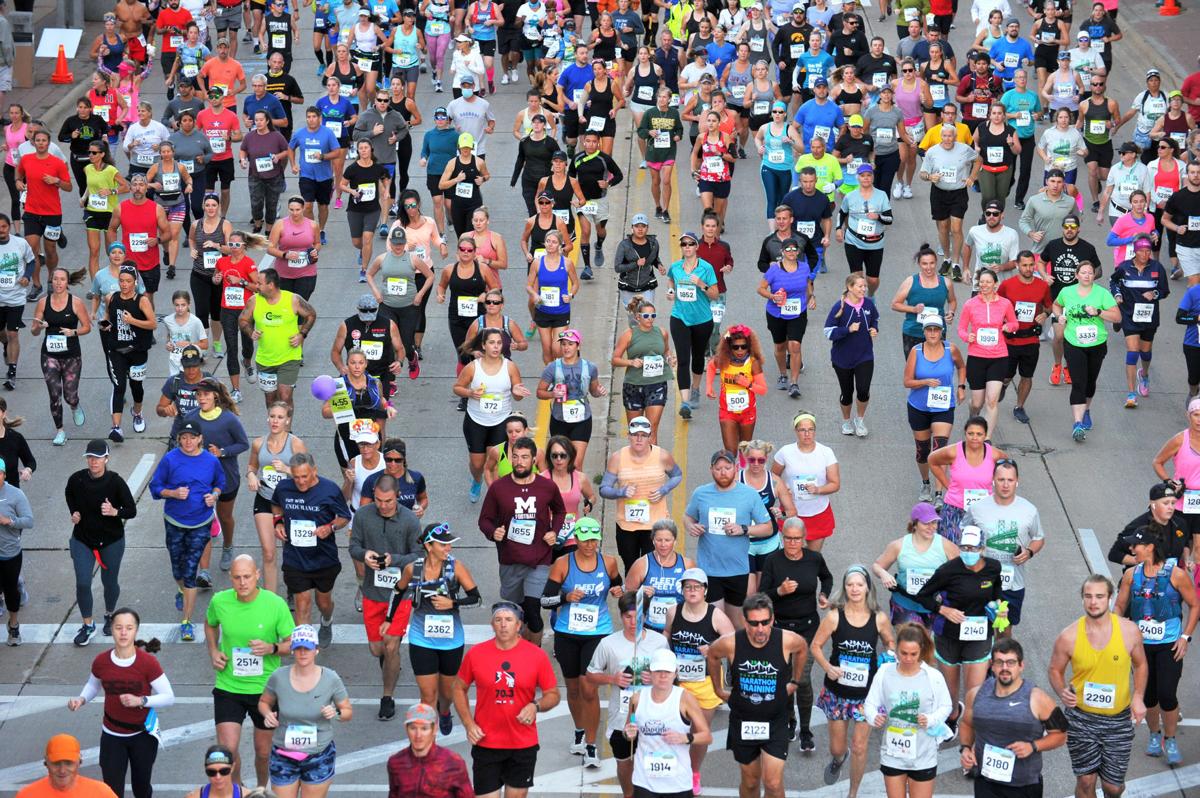 Runners fill the street on River Drive in downtown Moline during the start of the TBK Bank Quad Cities Marathon on Sunday.

Tyler Pence didn’t come into the TBK Bank Quad Cities Marathon thinking he was going to run his fastest time ever.

He also didn’t expect the two runners from Kenya who were far out in front of him through the first half of the race to be disqualified for running the wrong route.

But both things happened Sunday in the 23rd running of the marathon.

Pence, the head track and cross country coach at the University of Illinois-Springfield, crossed the finish line in 2 hours, 15 minutes, 6 seconds to become the first U.S. runner since 2001 to win the race. His time is the third best in the history of the event and earned him the first prize of $3,000.

Hirut Guangul of Ethiopia also pocketed $3,000 as she won the women’s race for the sixth time.

But Kenyans Elijah Mwangangi Saolo and Luke Kibet were left to wonder what might have been had they not diverted from the course on Arsenal Island, a little more than halfway to the finish line.

Saolo and Kibet were far out in front of Pence and the rest of the pack as they came down Rodman Avenue on the island. But the bicycle rider leading them through the course mistakenly went straight on Rodman when he should have turned, and the two Kenyans followed him.

As Moreno explained the mistake to Saolo and Kibet near the finish line, the bicyclist stood nearby on the brink of tears.

“I messed up royally,’’ he muttered.

But Moreno said the two runners also should have known not to follow him.

“At that intersection where that incident happened, the course was well-marked,’’ Moreno said. “The signage is well-displayed. The volunteers are there. And the fourth element is those elite runners have a meeting the day before to get familiar with the course.’’

The 28-year-old Pence saw the whole thing unfold in front of him.

“It was pretty obvious where to go out there so I don’t know what went on,’’ he said. “I was about 20 seconds back so I kind of saw it happening but I’m not going to shout. It’s not my job.’’

He said he wasn’t so sure he couldn’t have caught Saolo and Kibet anyway.

“I kind of wish they had stayed in it because I felt like I was being pretty patient and it would have been nice to have somebody to chase down the stretch,’’ he said. “Either way, I felt good. It was just nice to get back out here.’’

Pence said this was his first race since competing in the U.S. Olympic marathon trials about a year-and-a-half ago.

His best previous marathon time was 2:15:37 about two years ago but said his training for the Q-C event went very well.

“I obviously came today with no hope of PRing but sometimes it just comes,’’ he said.

Saolo was on a near-record pace before his mishap occurred. He is the grandson of Joseph Nzau, a Kenya running legend who won the Quad-City Times Bix 7 twice in the 1980s.

Saolo has been training with Nzau in Santa Fe, N.M., and trying to scrape together enough money to stay in the U.S. with his wife and two children. He even initiated a GoFundMe page that had accrued $2,864. Obviously, the $3,000 first prize would have come in handy.

Moreno said he needed to look at video of the mistake but said it was very likely the race would do something for both Saolo and Kibet.

“I don’t want this to be a total loss for them so I think there is going to be some compensation for them,’’ he said. “That shows that we are taking some responsibility ourselves. As race director, I feel somewhat responsible … It’s very likely we’re going to compensate them. Today.’’

He said he and his race committee would learn from the mistake.

“Our volunteers have to be better trained or qualified. We just can’t have any bicyclists any more. We’re going to have to have some qualifying standards to have that responsible position ... We learn from this experience.’’

No. 6 for Guangul: Guangul was almost six minutes off her 2012 course record in claiming her sixth Quad Cities victory, but she still ran the seventh fastest time (2:40:54) in the history of the race.

She said there is no question she will come back next year to try for a seventh win.

“I love this race,’’ she admitted, noting that Sunday’s mild conditions were the best she ever has seen for the Q-C event. “Not too many hills and the people here are so nice.’’

Too wins, too: Des Moines resident David Too easily won the Mel Foster Half-Marathon in a time of 1:06:09, beating second-place finisher Devin Allbaugh by about two minutes.

Too just completed his college career at Iowa State last spring, placing 17th in the country in the 3,000-meter steeplechase. He had never run a half-marathon before.

“But I have a good 10k time so I just pushed it a little more and it worked out,’’ Too said.

Allbaugh, a former Pleasant Valley High School star who also ran at Iowa State, earned prize money as the top local finisher. He said he was in fifth or sixth place with a few miles to go but was able to work his way back up to second.

Marie O’Leary of St. Louis, a former Normal Community runner who completed her college career at Missouri in 2014, was the women’s winner. She put on a finishing kick to beat Patty O’Brien of Maplewood, Minn., by a couple of steps.

“We were kind of back and forth the entire way,’’ O’Leary said. “She actually was probably ahead of me for most of the second half of the race. Then we kind of caught up to each other in the last mile.’’

Almost ideal: The race-time temperature was in the high 50s with very little humidity and although it climbed into the 70s before the race was over, almost everyone loved the conditions.

“It was pretty much perfect,’’ Allbaugh said. “Maybe just a slight wind but I don’t want to nit-pick. It was a very nice day.’’

Watch now: Is Zach LaVine on the verge of becoming a superstar?

Watch now: Is Zach LaVine on the verge of becoming a superstar?

Runners fill the street on River Drive in downtown Moline during the start of the TBK Bank Quad Cities Marathon on Sunday.