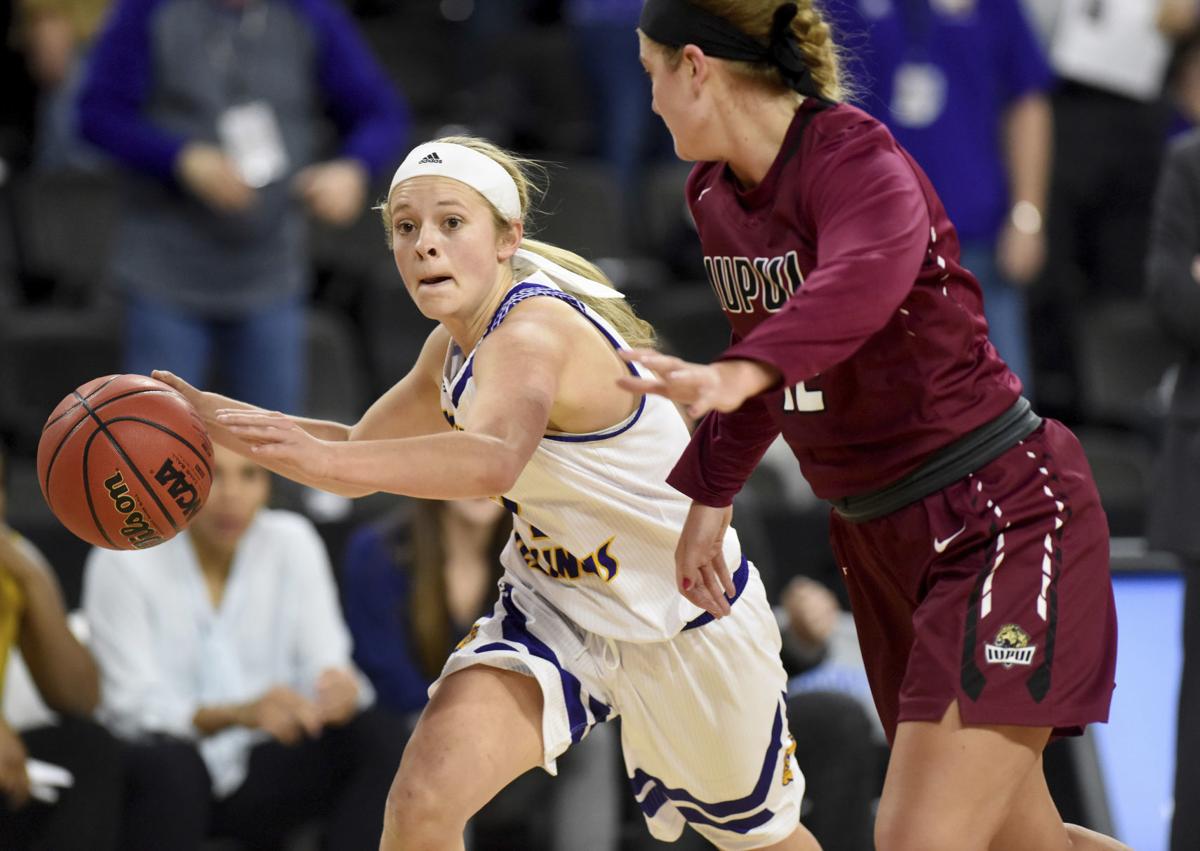 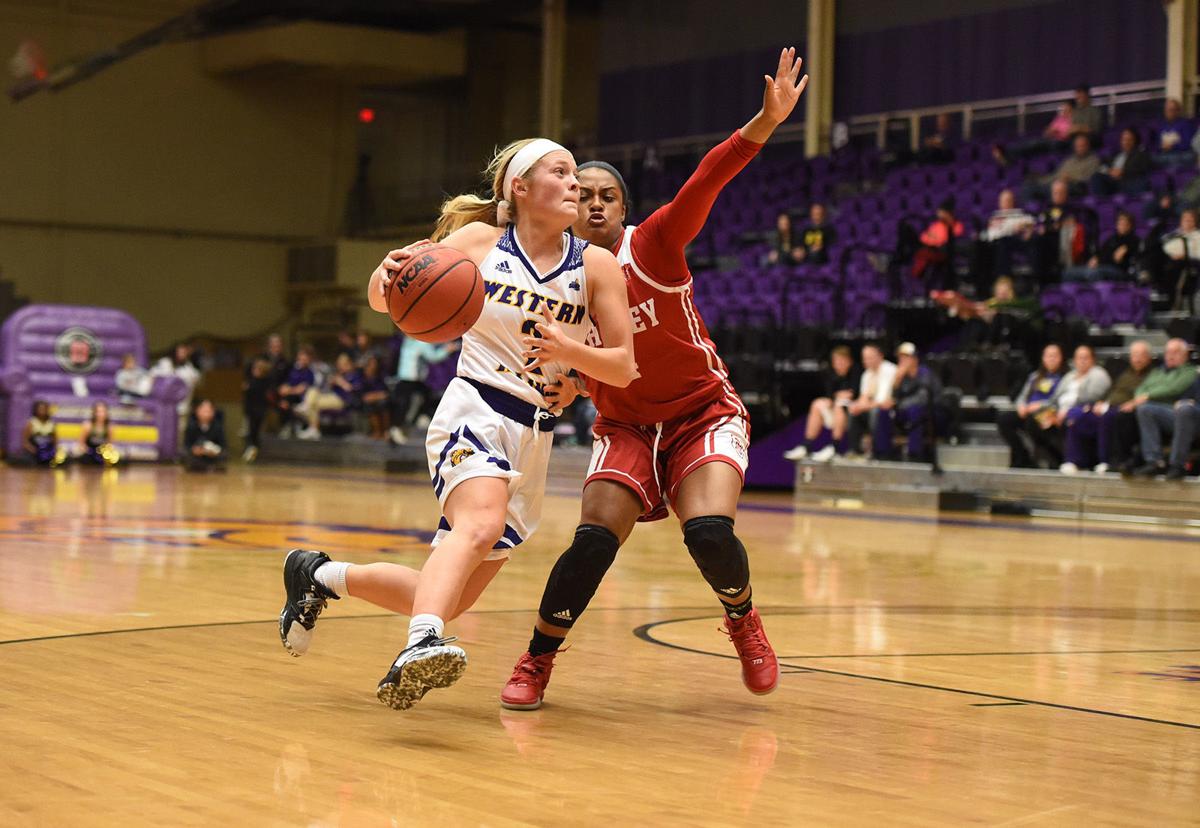 After four seasons as a player and one as a coach at Western Illinois, Emily Wieskamp, formerly Clemens, is back at her alma mater helping coach the Muscatine Muskies.

MUSCATINE — Emily Wieskamp might have had opportunities to play professional basketball after she graduated from Western Illinois University.

Either way, the only way Wieskamp (nee Clemens) would have considered it is if a women’s pro team magically sprung up in Muscatine.

Muscatine is the only place Wieskamp considered moving back to after her college career finished and she put in a year as a graduate assistant under Western Illinois Leathernecks head coach JD Gravina.

“We’re glad to be back in Muscatine.”

Trying to rattle off most of Wieskamp's college accomplishments on and off the court might leave a person winded, similar to the feeling it must have felt like trying to guard her.

Wieskamp has joined head coach Susan Orvis' staff as an assistant coach this season. The former Muskie suits up for practice almost every day.

“First, it makes me feel old,” Orvis said, "but at the same time, I’m so proud of our kids that come back and with Emily … what she was able to accomplish on the court (at Western Illinois) and in even in the year she was a coach there, those are great experiences, those are going to carry her and then to have her come back and pour those into our environment is a real blessing for us.”

Back in the Muskies’ purple and gold, Wieskamp is back as something of a conquering hero for the girls basketball program.

As a senior with the Muskies, Wieskamp led the team to a 19-4 record. She scored 15.3 points and dished out nearly four assists per game en route to leading the Muskies to a Class 5A regional final.

With the Leathernecks, Wieskamp was the Summit League’s Player of the Year as a junior. She was a four-year letterwinner.

“Emily was so driven at everything she did,” Gravina said. “As a basketball player, she always seemed to play and practice with a chip on her shoulder. I'm not sure if it was because she was always ‘too short’ or because she was under-recruited, but she always seemed driven to prove people wrong. She was one of the most competitive kids I’ve ever coached. Even in the classroom, if she got a 92-percent on a test she was mad about it.”

The 5-foot-4 Wieskamp was recognized as Player of the Week for the Summit League nine times, including back-to-back weeks as a senior. A span in which she recorded 39 points, 13 assists and nine rebounds in a win over the University of Denver.

Much like other college basketball players who end up at mid-majors, one of Wieskamp’s biggest accomplishments doubles as one of sports’ biggest contradictions.

So many players, like Wieskamp, enjoy an incredible amount of winning at every level, only to have their career hit a climax in the form of a loss.

For Wieskamp, that came when she led the Leathernecks to the women’s NCAA tournament, ultimately losing to Florida State, a three-seed, 87-66, in the first round. Florida State ended up making it to the Elite Eight that year, losing to eventual national champion South Carolina.

“It was a really tough game,” Wieskamp said. “We played a really high-level team — I think we were maybe up two at half — but we hung in there and played extremely well. When you play against that caliber of team, it’s just tough athletically … but it was a great experience, my family was able to go, so those are definitely moments I’ll look back on (positively).”

This past summer, she married Matt Wieskamp, brother of Hawkeye standout Joe.

“What Joe’s been able to do is really special,” Emily Wieskamp said. "It’s been fun to watch his development, I think he was maybe in seventh (grade) when Matt and I started dating. So to watch him turn into the player and person he has become has been really fun.”

With all that experience now sitting on the bench next to Orvis, who was a successful player in her own right at the University of Iowa, the Muskies have a very accomplished staff.

“Emily definitely impressed me with how she adjusted to being a coach,” said Gravina about Wieskamp’s year as a grad assistant. "I've felt like sometimes really good players struggle to be realistic with the average student-athlete, but Emily became much more empathetic as a coach. She really related to the players well and understood their challenges."

Wieskamp is honored to help a coach and program that molded her development.

“Muscatine is a special place,” she said. "I think coach (Orvis) has built a great program here, so to be able to go through the program and go on to play college basketball and come back and work with someone (Orvis) who was so instrumental in my career, it’s fun.”

Garza's rise the product of work, toughness and Dad's plan

IOWA CITY — After reaching 1,000 points for his college career earlier this season, Iowa center Luka Garza was presented with a souvenir baske…

Sabers down Bulldogs in preview of future conference foes

Athletes of the week

Given Marc Polite took over as Davenport North’s boys basketball coach at the end of the summer, it was understandable his team started the se…

On paper, the Davenport Assumption-Pleasant Valley wrestling dual on Thursday night looked like a marquee match-up between two of the stronger…

After-thoughts from Iowa’s 85-80 victory over Rutgers:

After four seasons as a player and one as a coach at Western Illinois, Emily Wieskamp, formerly Clemens, is back at her alma mater helping coach the Muscatine Muskies.