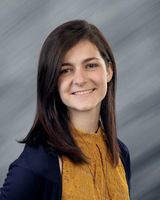 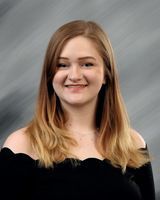 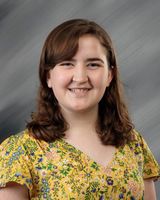 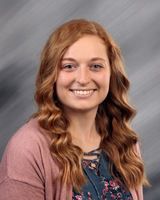 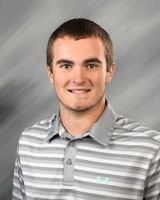 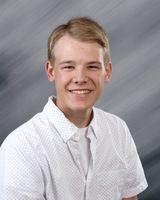 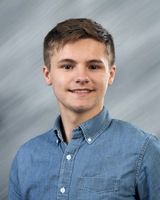 What’s something you learned that you will take with you after high school? I will always remember my time in Spanish. Every day, we would listen to songs and do different activities that made learning seem less like a chore. While not having worksheets was nice, it was more fun being able to have conversations with the teachers in Spanish that we could either relate to or have fun with. Having Spanish within my schedule was definitely a highlight to my days in high school and I wish I could take the señoras with me to college.

Alexandra Minyard, child of John and Katie Minyard, plans to major in Acting and Directing and Psychology at Baldwin Wallace University, Berea, Ohio.

Top 3 accomplishments: Color guard choreographer and captain, Rotary Student of the Month of November, and any time I got the opportunity to be on stage sharing my passion with others.

What’s something you learned that you will take with you after high school? I will never forget my first year of choir, theater, and band in high school. I was completely enamored by the pure energy and love of the arts in the music department. I had never been around so many people who shared a passion for what I love most in the world. The arts gave me so much: theater gave me a place where I could be anyone, anywhere, the choir gave me a voice that I thought I had, but I really had no idea, and the band gave me some of the best friends I have ever made. If I wouldn’t have had such an impactful freshman year, I could have left my passion behind and missed out on more things than I can count. I am forever grateful for the teachers and classmates that encouraged me to do what I love, no matter what obstacles got in my way.

What’s something you learned that you will take with you after high school? One of my favorite memories from school actually happened outside of the classroom. Mrs. Neece (my government teacher) offered the seniors in her classes the opportunity to become certified election judges. Those of us who were interested took a “field trip” to the county clerk’s office and completed a training course to become certified. Later, I put this knowledge to work as an election judge in Rock Island County. It was a great experience to not only learn about government and how it works but also to get to participate in it at the local level. This was made possible through the help and encouragement of my school’s teachers and staff.

Mackenzie Reimers, child of Jim and Carrie Reimers, plans to major in Communication Studies at Black Hawk College, in Moline, and then transfer to Illinois State University, Normal, Ill.

You have run out of free articles. You can support our newsroom by joining at our lowest rate!
Already a subscriber?
Log in or Activate your account.
Loading&hellp
No thanks, return to homepage.

Top 3 achievements: 2020 Illinois State Scholar, going to the IHSA Softball State Finals two years in a row, and placing 1st and 3rd, and three top 3 finishes in the Class B Music Sweepstakes.

What’s something you learned that you will take with you after high school? During my sophomore year, I was in an Advanced English II class. Every day we would do what our teacher called vitamins. They were short lessons about spelling or formatting that we would need to use as we leave school and go into the real world. There were some vitamins that I already knew, but I learned so many new skills that year. At the time, most of my class did not think it was something they would need ever again, but I still use those lessons to this day.

What’s something you learned that you will take with you after high school? One classroom experience that I will never forget occurred in Consumer's ed. It is not a funny experience but rather a useful one. Consumer's ed has been my favorite class because we learn so much in that class that applies to our future. In most other classes, you learn stuff that you will forget about after high school or college. However, I remember the day we talked about investing and it just has always stuck with me. The different technological terms and everything else. I know I won't forget about this because it is a topic that has always been of interest to me.

What’s something you learned that you will take with you after high school? One of the greatest learning experiences I had regarding my vocational classes would have been in my agriculture class. It was a series of days but my class, with the help of my teacher, and a professor from Kirkwood College built a hydroponics system. Each of us students got the opportunity to work hands-on with the materials and instructions to create our very own hydroponics system for the agriculture classes. We had some mishaps but overall it was a great way for everyone to learn about the cycle of the system and how it works.

Colin Swailes, child of Melissa Verplaetse and Jason Verplaetse, plans to major in Nursing at Black Hawk College and then transferring to Trinity College of Nursing.

Top 3 achievements: I was in wrestling, show choir, and choir.

What’s something you learned that you will take with you after high school? Something that I have learned in the classroom is not to get into any drama, even if you get into the middle of it between friends. It’s not worth it.

Welcome to the discussion.

Keep it Clean. Please avoid obscene, vulgar, lewd, racist or sexually-oriented language.
PLEASE TURN OFF YOUR CAPS LOCK.
Don't Threaten. Threats of harming another person will not be tolerated.
Be Truthful. Don't knowingly lie about anyone or anything.
Be Nice. No racism, sexism or any sort of -ism that is degrading to another person.
Be Proactive. Use the 'Report' link on each comment to let us know of abusive posts.
Share with Us. We'd love to hear eyewitness accounts, the history behind an article.

All content on this page is user-submitted or provided by the schools with which we have partnered. While the information is moderated for site data entry guidelines, we cannot be held responsible for factual errors, misspellings, or student profile information as such. If you see an error that needs correcting, please contact us.
© Copyright 2020 The Quad City Times, 500 E 3rd St. Davenport, IA | Terms of Use | Privacy Policy
Powered by BLOX Content Management System from TownNews.com.